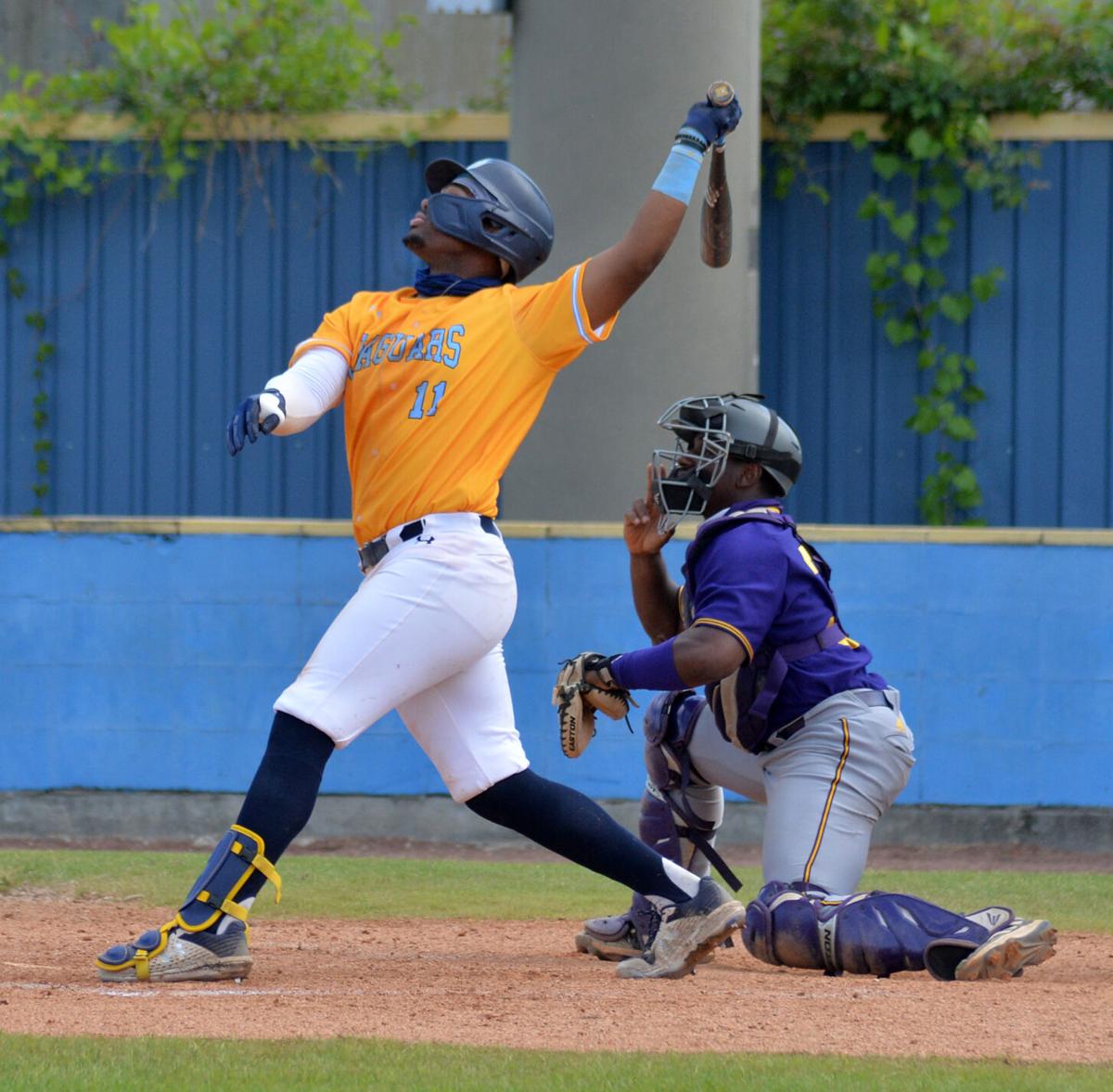 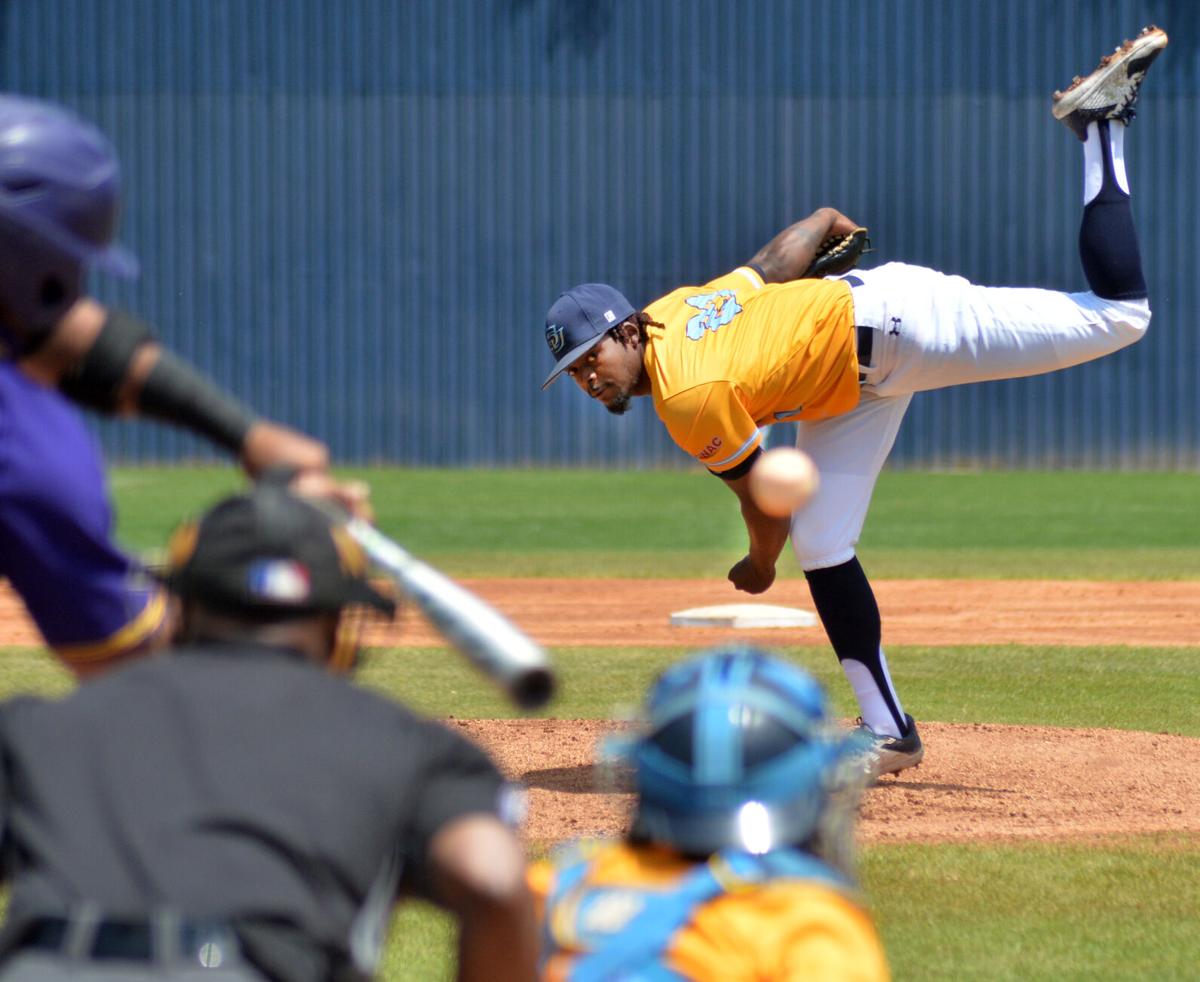 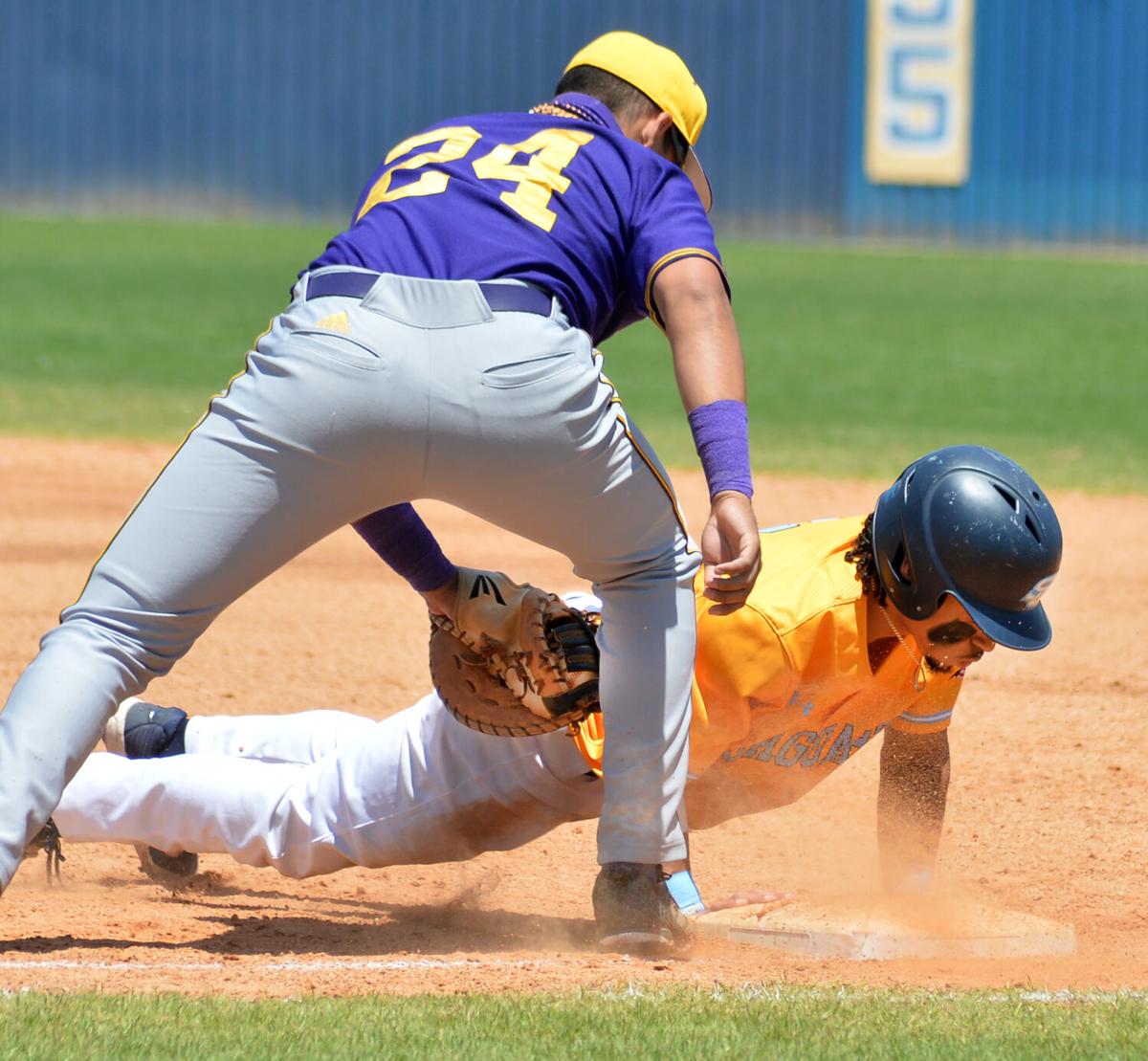 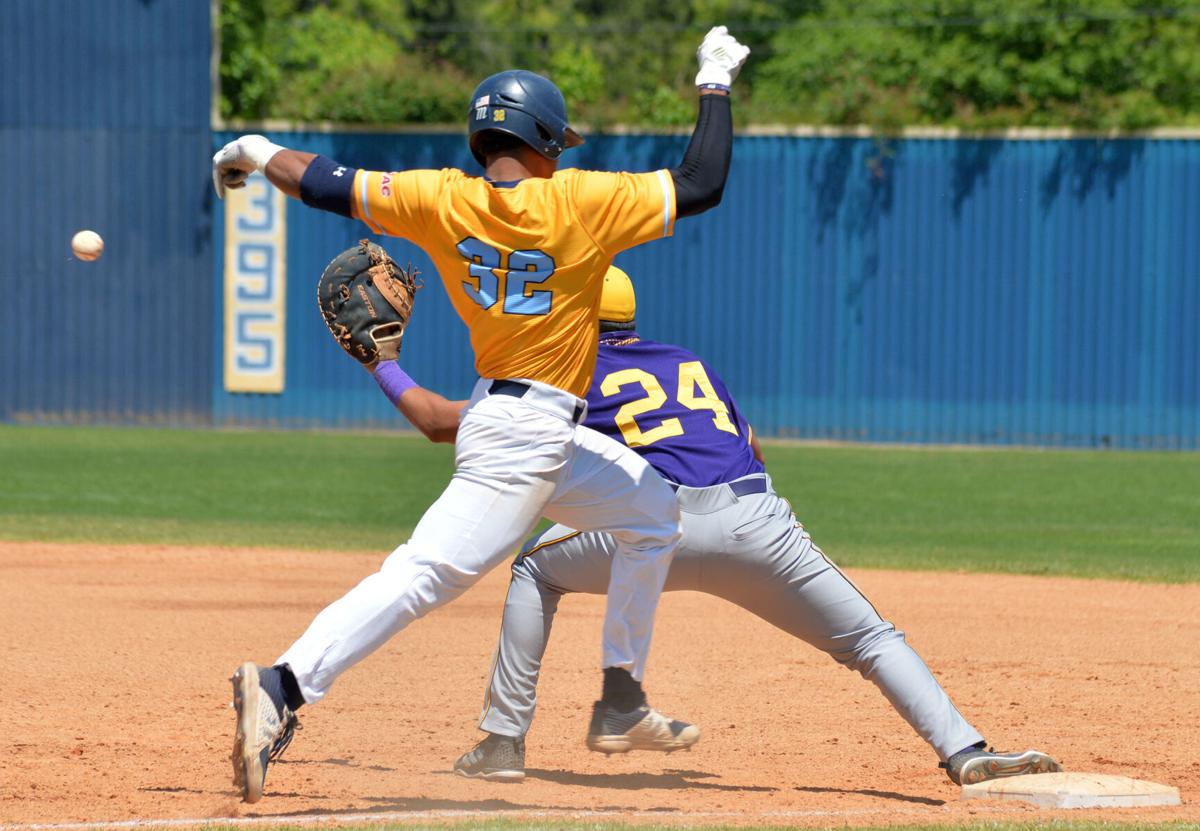 Southern University base runner O'Neill Burgos is thrown out at first base as Prairie View's Sebastian Coria stretches for the ball, on Monday afternoon at Lee Hines Field. 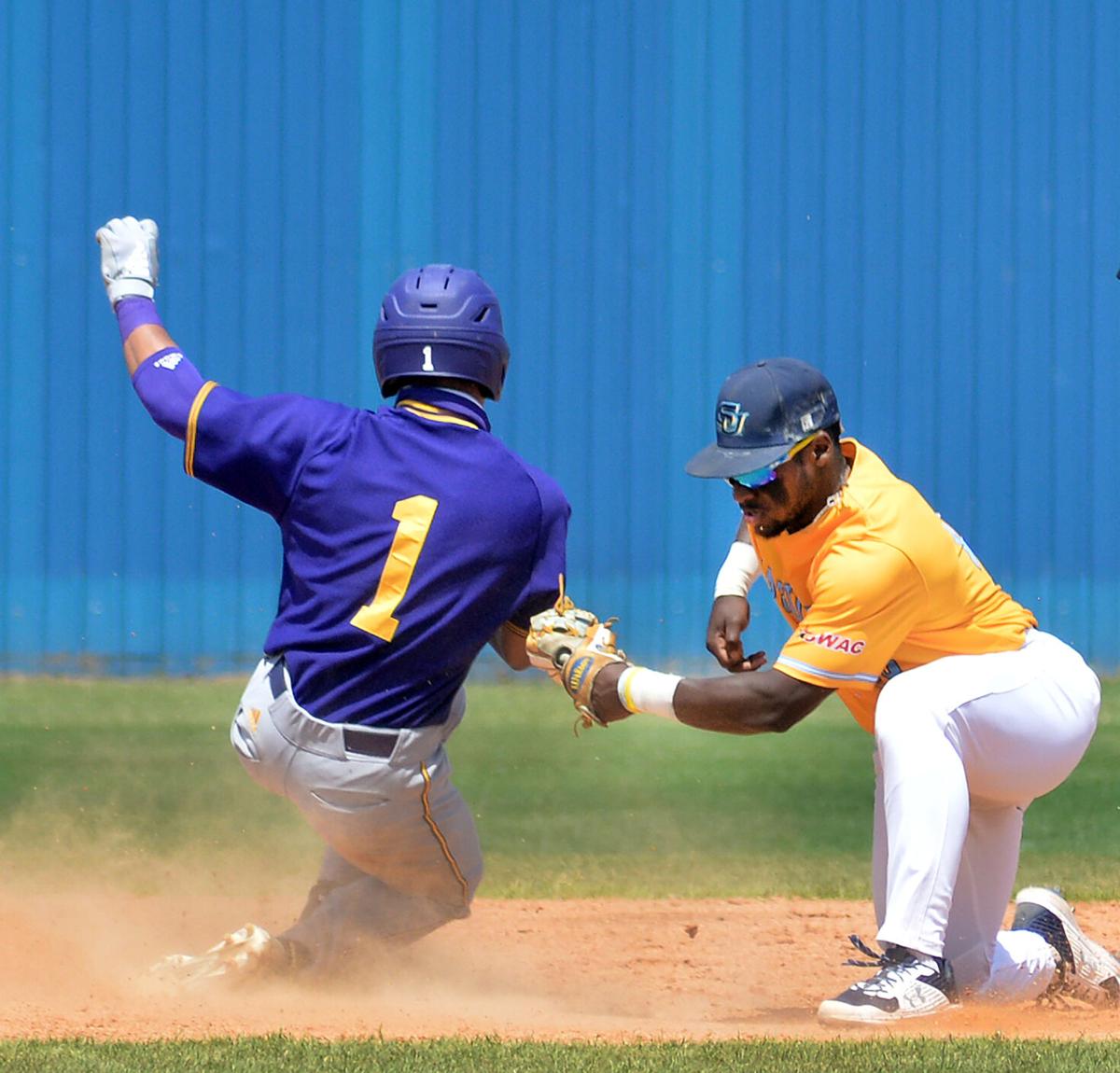 Southern University base runner O'Neill Burgos is thrown out at first base as Prairie View's Sebastian Coria stretches for the ball, on Monday afternoon at Lee Hines Field.

The comfort of their home ballpark seemed to help Southern's pitchers in this weekend's series against Prairie View. Unfortunately, hitting all but disappeared.

The Jaguars were held to three hits in each game of a 4-0, 6-4 doubleheader sweep Monday by Prairie View, which gave the Panthers a series sweep at usually dependable Lee-Hines Field.

Southern failed to score in the final five innings of the nightcap as the visitors took the lead with a three-run fifth inning and added an insurance run in the sixth.

In the opener, Southern was shut out by Victor Mendoza and Derrick Curry, who combined to hold the Jaguars to three hits. Benjamin Ybarra broke the game open with a bases-loaded double to score three runs in the seventh inning.

“We just didn’t do anything offensively this weekend,” Southern coach Chris Crenshaw said. “No explanation; we practice, we hit BP, we work on situations all week. We just didn’t come through.

“Luckily we had some pitchers show up. It’s funny in this game. Couple of weeks we don’t have any pitching and we hit; this week we pitch and don’t hit it. Hopefully that means something is about to come together.”

Southern scored 25 runs in three games at Grambling last weekend. This time, the Jaguars scored five runs on 12 hits. In Monday’s doubleheader the Jaguars struck out 16 times and left 16 runners on base, 24 for the series.

“Obviously you want to win series and win every game but you want to protect your house, and we just didn’t do that this weekend,” Southern second baseman Zavier Moore said. “We are getting hits and finding our way on base, but we have to find a way to come through with men on base. We’re finding the barrel; we have to master the art of hitting it where people aren’t.”

The sweep drops the Jaguars (11-20, 9-9) into fourth place in the SWAC West Division standings behind Grambling (9-4), Texas Southern (8-7) and Prairie View (7-6). Two weeks ago the Jaguars were in first place but have lost seven of their past nine conference games.

Southern jumped ahead in the nightcap with the help of two errors when Taj Porter singled home a run and Moore hit a sacrifice fly. When the Panthers Keanu Maldonado tied it with a two-run double in the second, the Jaguars answered with sacrifice flies by Tremaine Spears and O’Neill Burgos in the bottom half. That was the last answer they had.

Joseph Battaglia pitched well until the fifth, when he loaded the bases on two hits and a fielder's choice intended as a sacrifice bunt. Brayden Johnson singled home a run and another scored on an error by left fielder Quincy Smith, who dropped the ball. Pinch hitter Chris Mendez then delivered a sacrifice fly to give PV the lead.

Southern had only three baserunners after the second inning.

In the opener, the Jaguars had two hits in the first inning and didn’t get another until pinch hitter Ryan Ollison’s double in the seventh. Southern left five runners on base in the first two innings.

Jonathan Evans struck out on three pitches with the bases loaded in the first, and Tremaine Spears hit a smash off Mendoza’s glove with runners on first and third in the second, but Mendoza recovered to throw him out.

Mendoza (1-1) overcame his shaky start to retire nine consecutive batters in one stretch. Spears broke the streak with a two-out walk in the fifth but was thrown out stealing to end the inning.

Southern wasted a good performance by starter Jerome Bohannon, who allowed one run on six hits through five innings. He almost escaped a bases-loaded jam in the fifth, but Avery Williams’ slow-bouncing infield single scored the game’s first run.

Southern had a chance when pinch hitter Smith walked after Ollison’s double, but Curry got a grounder, a strikeout and a pop-up to end the game.

“We get up and relax, get too comfortable,” Crenshaw said. “We don’t step on their neck when we need to. We just have to keep working. We’ve played a lot of games for us to still be doing some of this stuff late in the season. That probably has to do with me, so I’ll start checking myself to see what I’m doing wrong.”