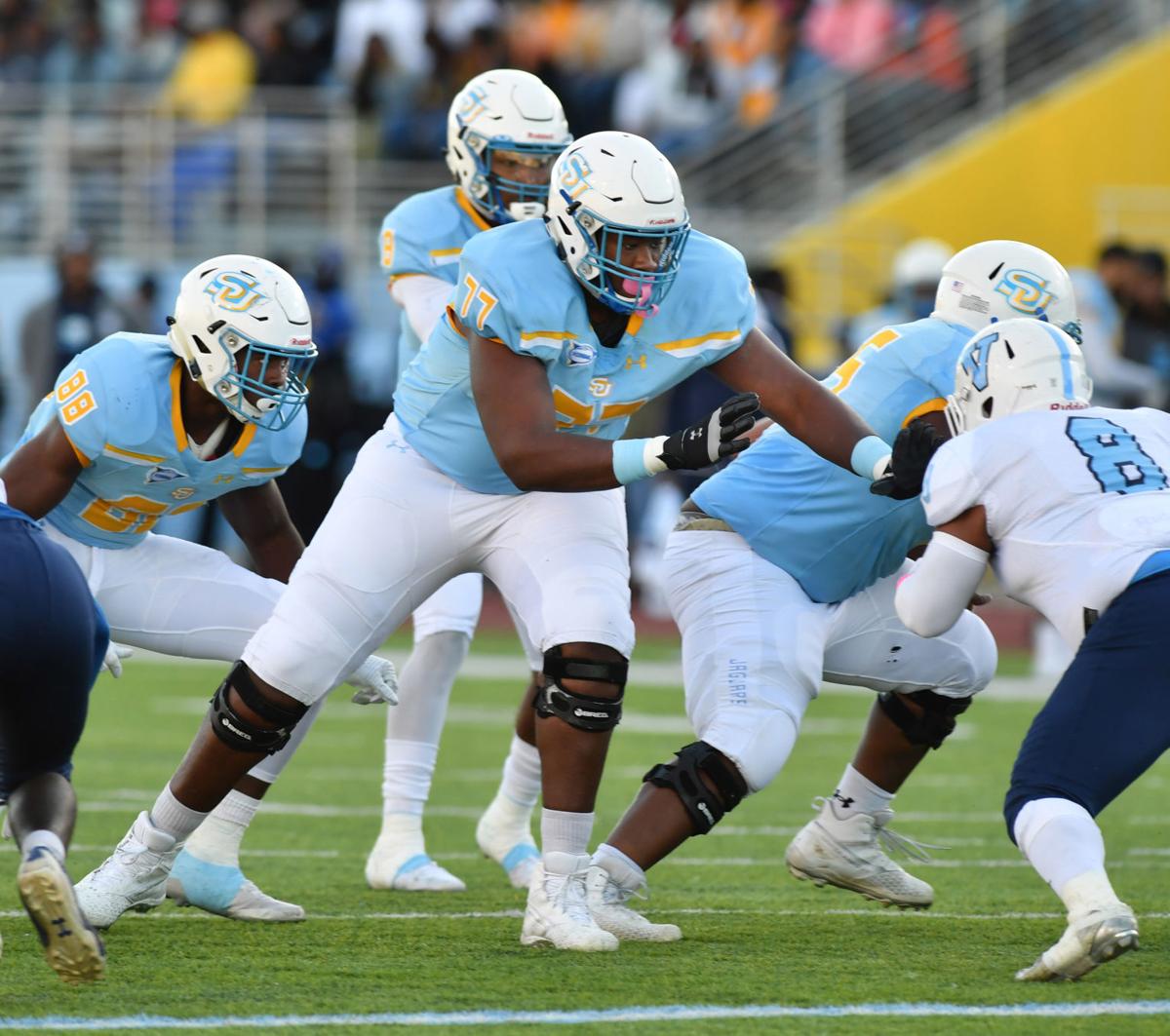 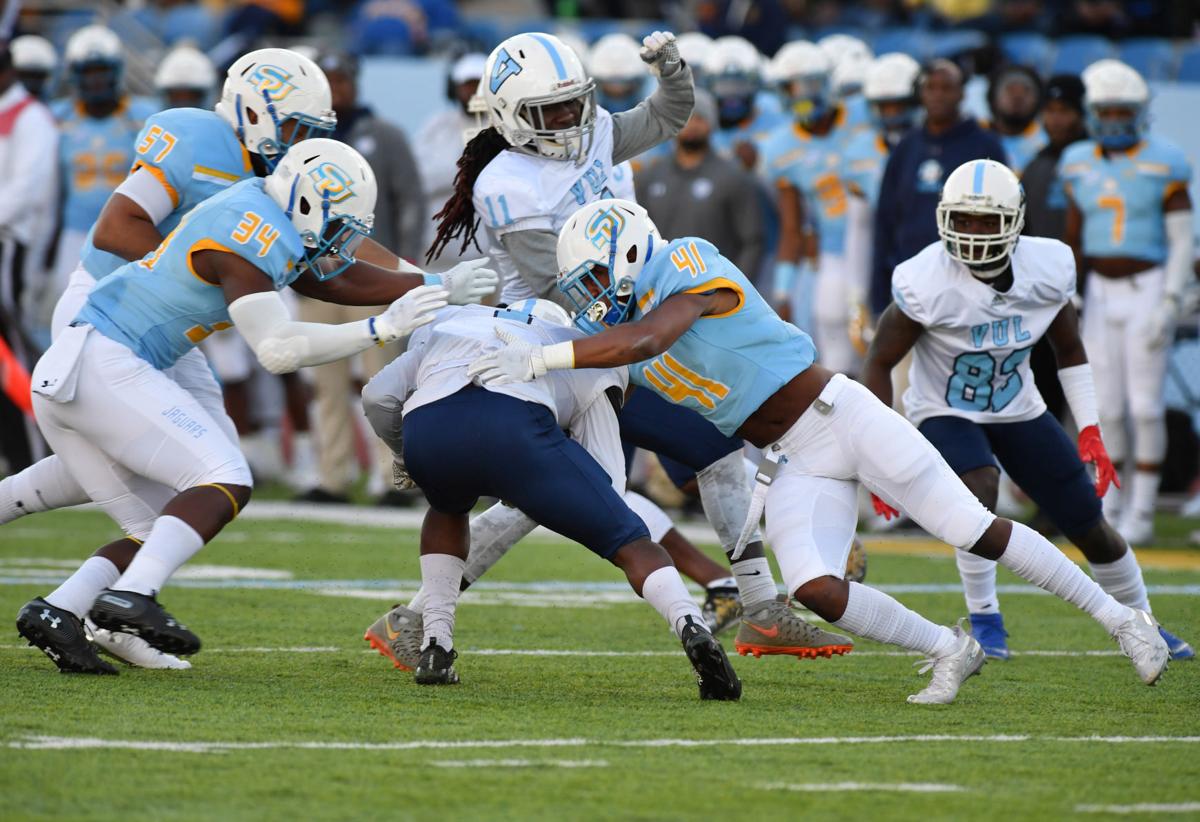 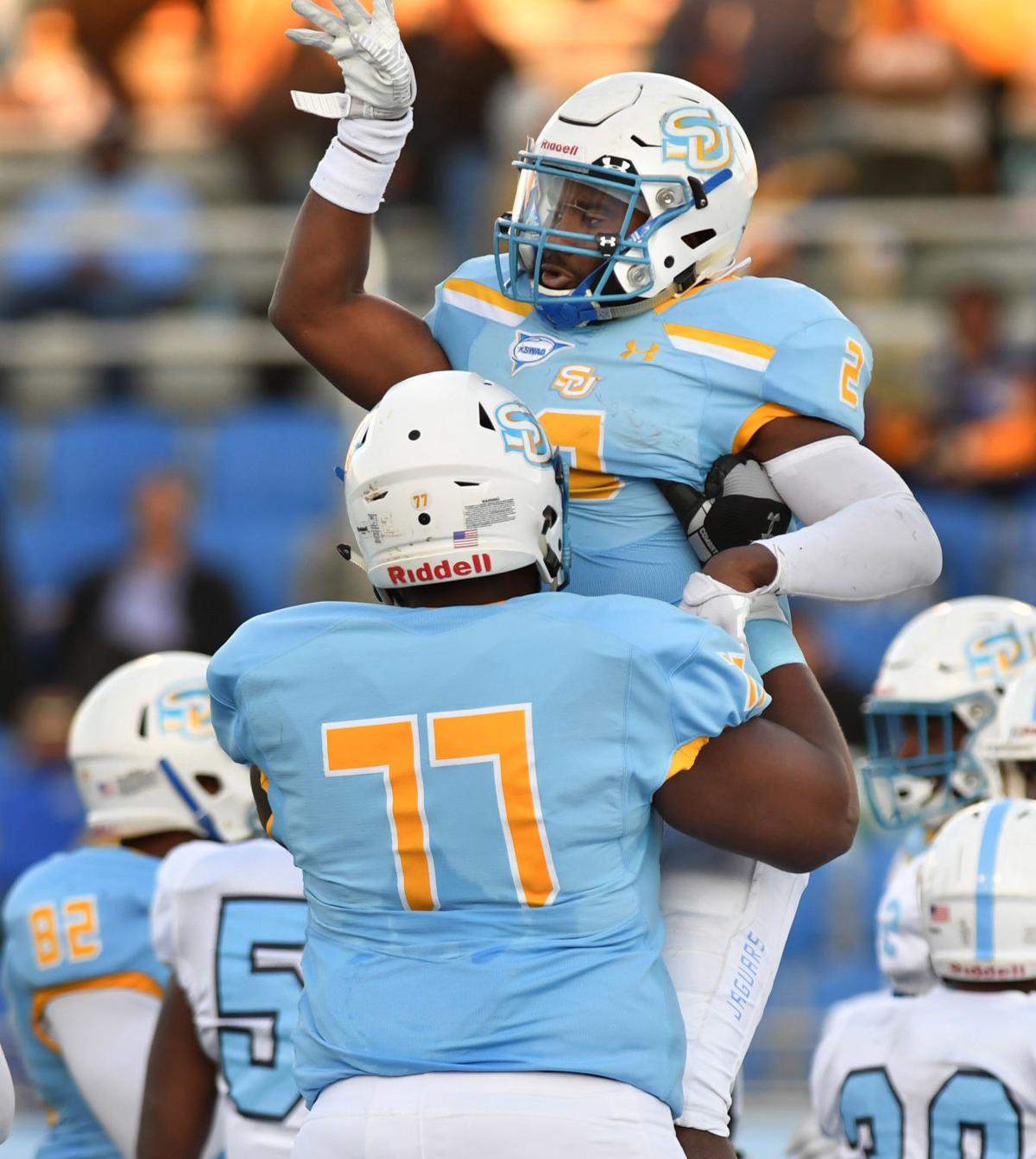 Southern University running back Devon Benn (2) is lifted in the end zone by offensive lineman Jodeci Harris (77), as they celebrate Benn's six-yard rushing score in the second quarter against Virginia University of Lynchburg, Saturday, Nov. 9, 2019 at A.W. Mumford Stadium. 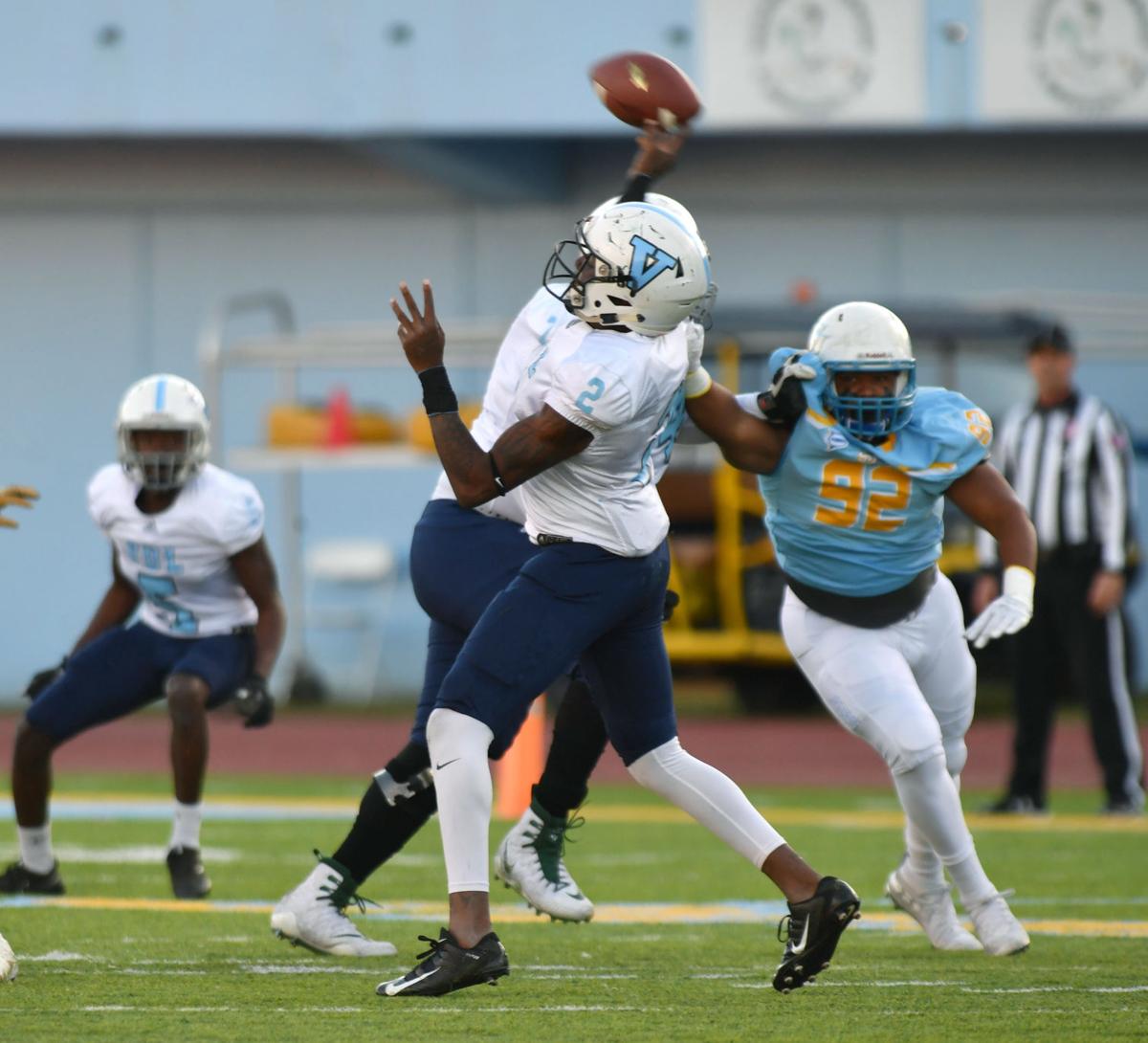 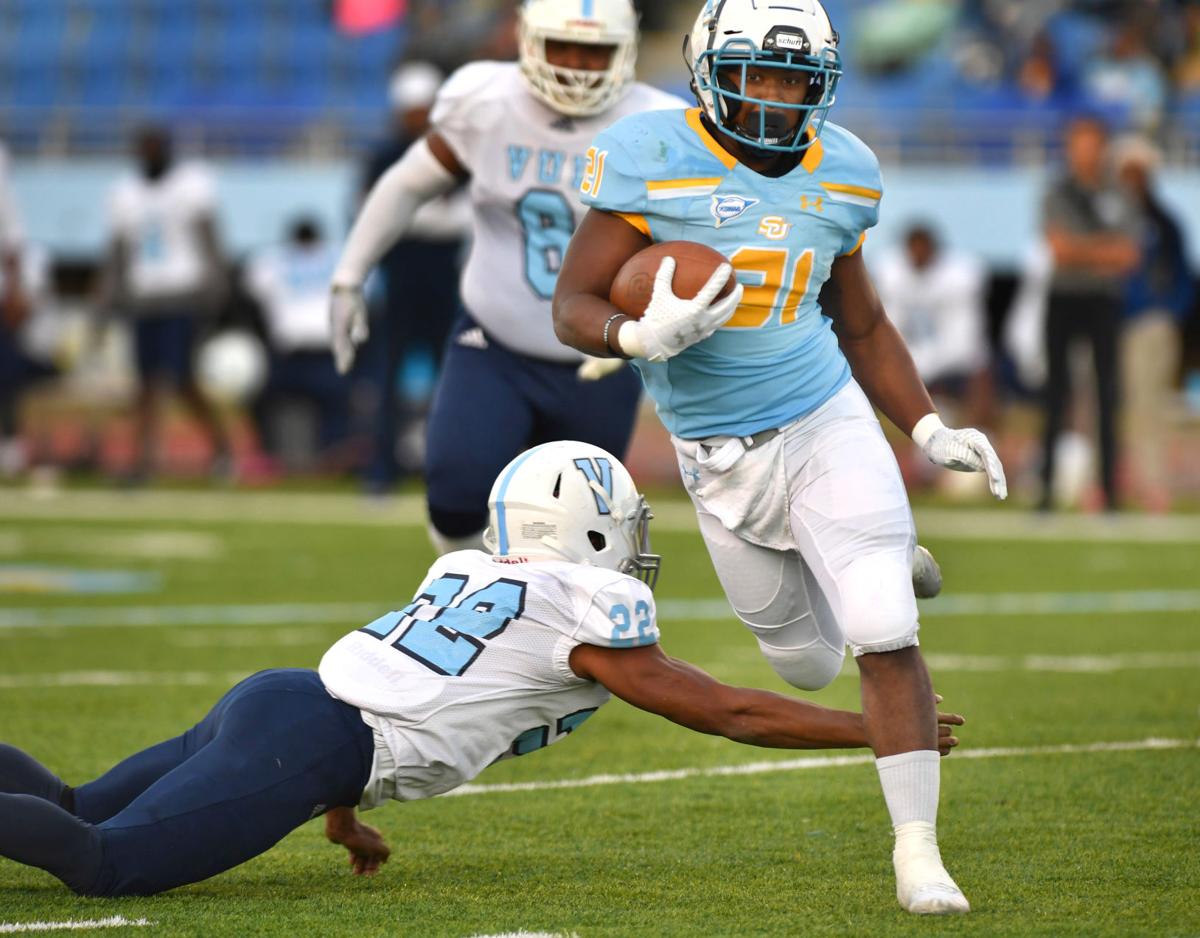 Southern University running back Devon Benn (2) is lifted in the end zone by offensive lineman Jodeci Harris (77), as they celebrate Benn's six-yard rushing score in the second quarter against Virginia University of Lynchburg, Saturday, Nov. 9, 2019 at A.W. Mumford Stadium.

It wasn’t flashy and there were no super-heroic performances, but Southern University took care of business with a workman-like effort that produced a non-workman looking score.

The Jaguars wasted no time establishing their dominance in a 58-7 victory over outmatched Virginia University of Lynchburg 58-7. More important, Southern kept its foot on the gas throughout the game to set itself up for a strong finish in the final three weeks.

Southern (6-4) jumped ahead 21-0 in the first quarter and led 41-7 at halftime without getting caught up in the ability of the winless team from a lower division. Quarterback Ladarius Skelton threw for two touchdowns and ran for another while running back Devon Benn had 120 yards rushing and two scores.

Skelton led a touchdown drive to start the second half and Southern spent the rest of the game emptying its bench.

“Offensively, defensively and special teams, we took some steps,” Southern coach Dawson Odums said. “We played against a team not our caliber but played up to our expectations. We didn’t play down, didn’t worry about the record, took care of business and executed. This is the end result.”

Southern piled up a season-high 604 total yards and looked sharp in its execution. The defense held the visitors to minus-14 yards rushing on 21 carries. Odums said the Jaguars had no major injuries and he played nearly everyone who dressed out.

Center Jaylon Brinson, one of 15 seniors honored before their game in their last home appearance, said the best part was they played from start to finish.

“A lot of teams can play good in spurts and certain quarters,” Brinson said. “We want to play great for four quarters. Not many people get this opportunity. We wanted make sure we took advantage of it and played dominant today.”

Skelton connected on 10 of 12 passes for 193 yards, including scoring passes of 53 yards to Hunter Register and 25 to Kendric Jones. He also ran eight yards on a scramble for the Jaguars’ first touchdown.

“We were ready to come out for a fast start,” Skelton said. “I felt poised, good back there behind the nickel (offensive line). Coming from that big win last week, just follow up to this week. We just have to connect on the small things, the details.”

Benn had scoring runs of six and two yards while his backup, Craig Nelson ran nine and three yards for touchdowns. Southern rushed for 371 yards and averaged 7.7 yards per carry.

Special teams contributed 10 points. Brandon Hinton provided Southern’s second TD on a 43-yard punt return and Cesar Barajas kicked a 20-yard field goal. Hinton’s punt return was the first for a score since Willie Quinn did it in 2016.

Defensivley, Southern sacked the Dragons quarterback Sherman Brown four times, two by Jordan Lewis and one each by Joe Davis and Dylan Walker. Kordell Caldwell had the Jaguars’ 11th interception this season.

Brown threw a 25-yard scoring pass to Joshua Gray for the visitors’ only points. He set up that touchdown two plays earlier with a 53-yard hookup with Said Sidebe. Brown competed 13 of 27 passes for 163 yards.

“I hope this game was able to give us some confidence, give us a chance to showcase a lot of players,” Odums said. “Overall we did what we needed to do.”

The Jaguars play at Jackson State next week, followed by an open date and then the Bayou Classic Nov. 30 against a Grambling team with a shot to win the Southwest Conference West Division after upsetting Alcorn State 19-16 in overtime.

Southern could not only win the West but host the SWAC title game if Alcorn loses again and the Jaguars win out.

“We’re happy we came out and played the way we were supposed to,” Benn said. “We achieved our goal this week. We played hard every play. That’s what we wanted to do and did it. Momentum is a big part of the game. We’re going to carry that the Jackson and try to go 1-0 next week.”

Southern coach Dawson Odums likes to talk about his season in terms of months.