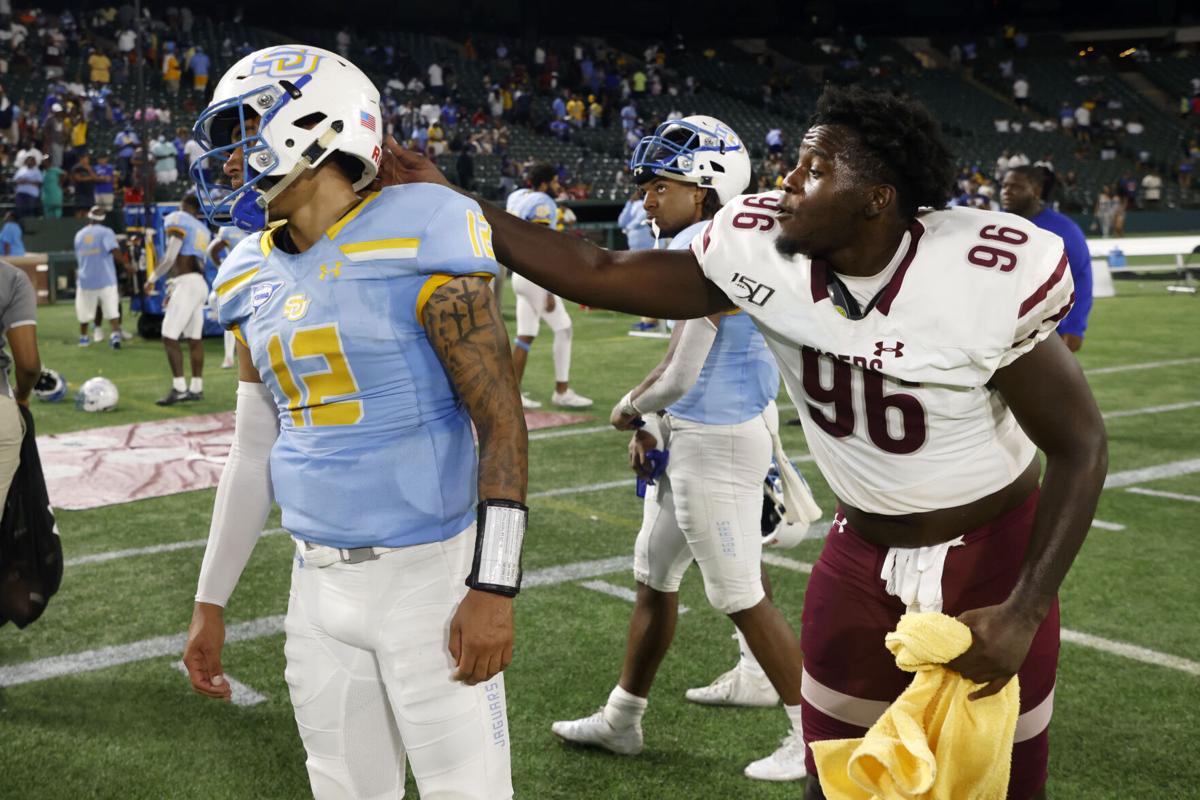 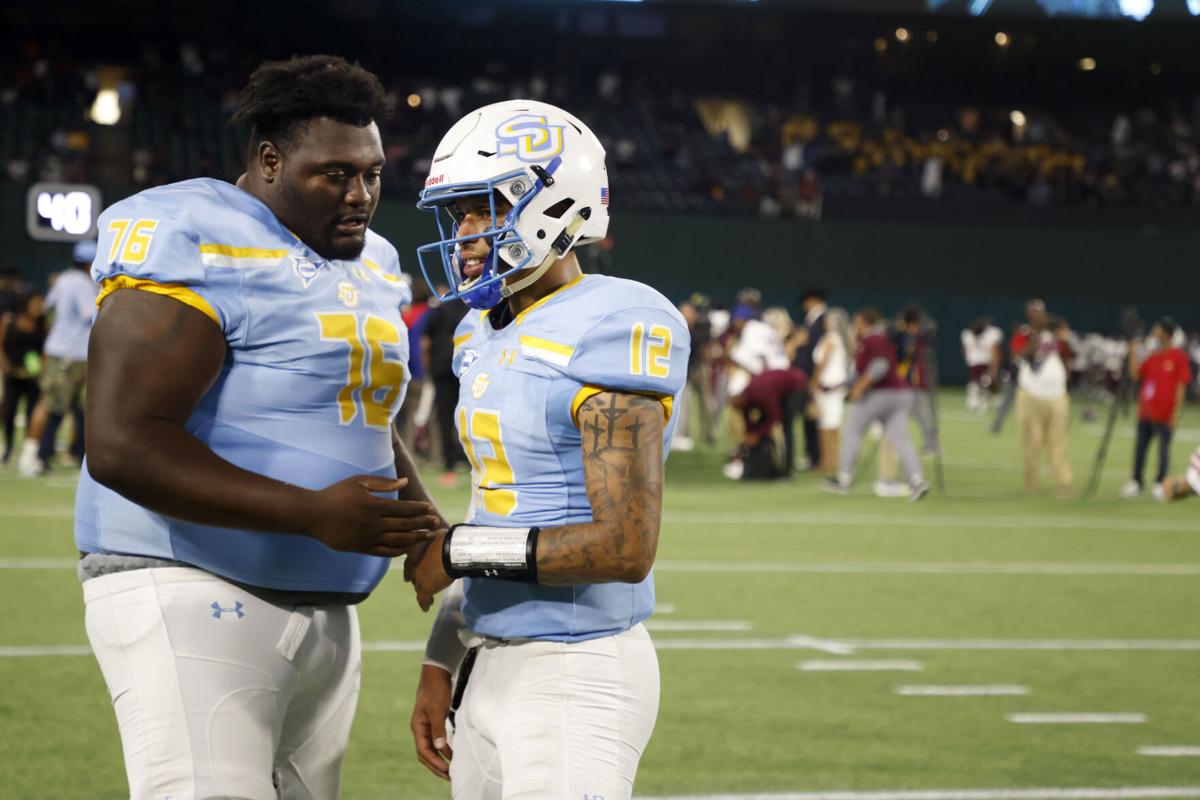 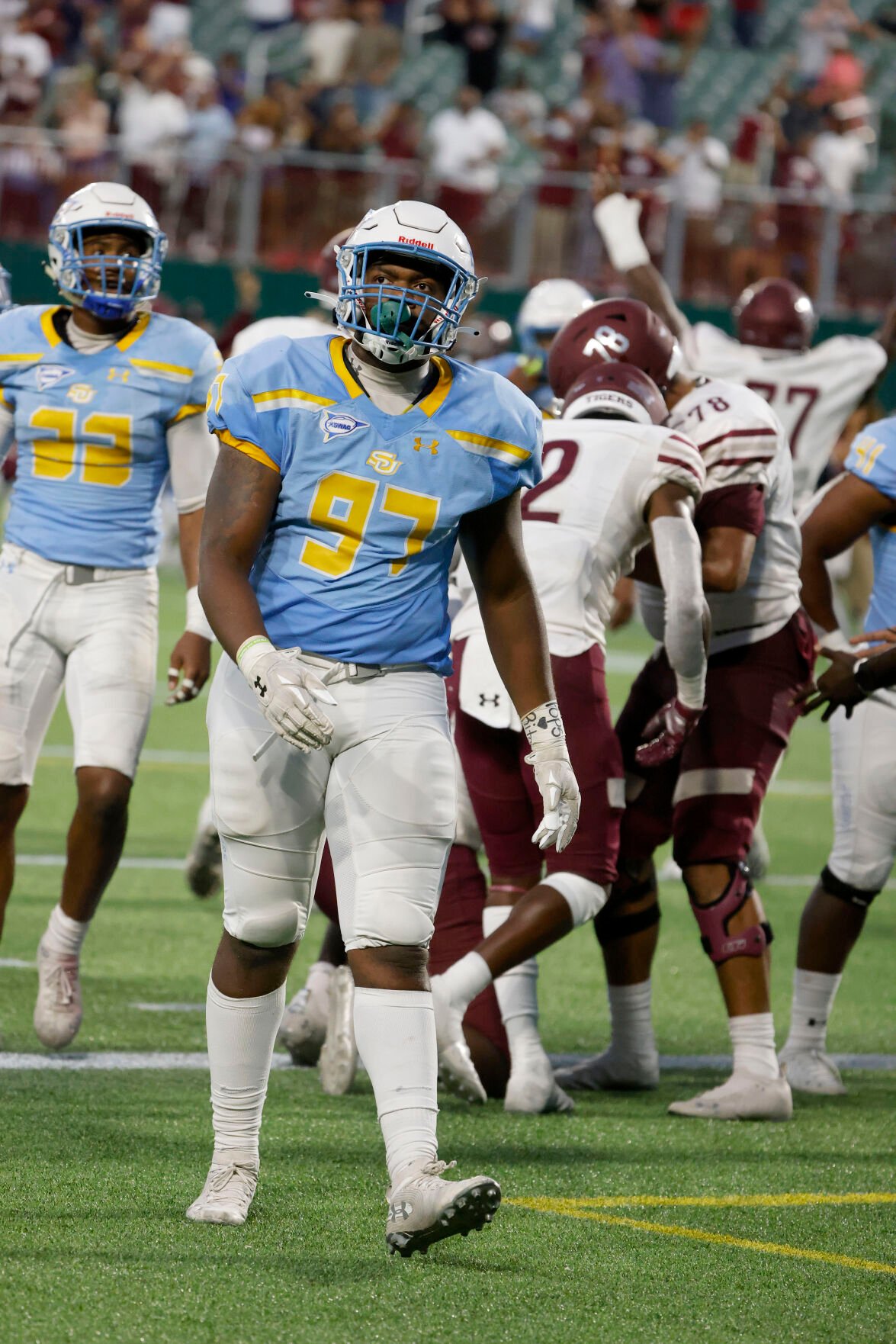 Southern University defensive tackle Robert Square III (97) reacts after he failed to stop a touchdown by Texas Southern running back Jacorey Howard, not pictured, during the second half of an NCAA college football game in Arlington, Texas on Saturday, Oct. 9, 2021. (Michael Ainsworth) 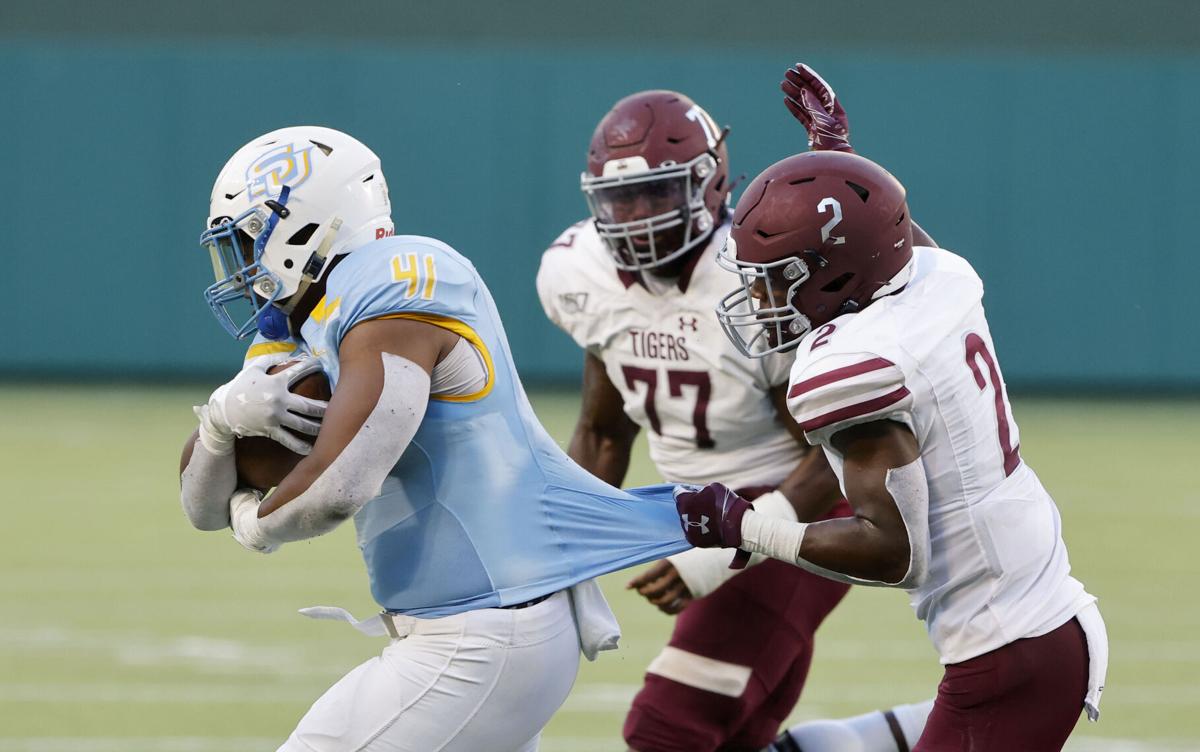 Southern University linebacker Ray Anderson (41) is chased by Texas Southern offensive lineman Drake Centers (77) and wide receiver Savion Sims (2) after he got a fumble recovery during the second half of an NCAA college football game in Arlington, Texas on Saturday, Oct. 9, 2021. (Michael Ainsworth)

Southern University defensive tackle Robert Square III (97) reacts after he failed to stop a touchdown by Texas Southern running back Jacorey Howard, not pictured, during the second half of an NCAA college football game in Arlington, Texas on Saturday, Oct. 9, 2021. (Michael Ainsworth)

Southern University linebacker Ray Anderson (41) is chased by Texas Southern offensive lineman Drake Centers (77) and wide receiver Savion Sims (2) after he got a fumble recovery during the second half of an NCAA college football game in Arlington, Texas on Saturday, Oct. 9, 2021. (Michael Ainsworth)

ARLINGTON, Texas — All game long Southern asserted its running game, but when the Jaguars needed a yard, they couldn’t get it Saturday — even with two replays.

Texas Southern took advantage of the Jaguars’ failed fourth down with 3:03 left to drive for the winning touchdown in a 35-31 victory in the Arlington Football Showdown at Globe Life Park.

Jacorey Howard’s 4-yard run with 39 seconds capped the scoring and the Tigers sealed the deal on Josh Murray’s interception at the Texas Southern 10-yard line on the game’s final play to snap the school’s 18-game Southwestern Athletic Conference losing streak dating to 2016.

The Tigers (2-3, 1-1) ended the program’s heartbreak and left Southern (2-3, 1-1) frustrated and searching for answers after multiple missed opportunities, including the big one late in the game.

“It never should come down to that,” Southern coach Jason Rollins said of a fourth-down run by quarterback Bubba McDaniel that came up short of the Southern 45-yard line. “We can’t make it close, don’t put it in the hands of anyone else. We have to do our jobs and execute and play football. All other things are outside doesn’t matter if you do your job.”

Three and Out: Quick takes from Southern's loss to TSU

The pivotal play was first reviewed for the spot and officials said it was TSU’s ball near midfield. Rollins asked for a measurement and officials reversed their call, giving the ball to Southern. But TSU coach Clarence McKinney challenged the ruling and officials called for another review that showed the original spot was incorrect.

“That was a first,” Rollins said of the two conflicting reviews.

McKinney said he felt all along McDaniel had come up short and when officials reversed the original ruling, he wasn’t going to let it slide.

“From my seat, we stopped them and it was a turnover on downs,” McKinney said. “There was a lot of confusion and I understand what Coach Rollins perspective was. He challenged the spot, so I challenged the spot, and the ball had evidently moved at one point. Fortunately for us the ball was called the right way.”

Southern had rallied to take a 31-28 lead when Ray Anderson stole the ball from TSU wide receiver Jyrin Johnson inside the Southern 10-yard line. That set up an 82-yard Jaguar drive capped by McDaniel’s 2-yard TD run with 8:04 remaining. On the next series, the Jaguar defense came up with another stop thanks to a tackle for loss by Lyston Barber and a sack by Tyran Nash.

But after the fourth down play it seemed inevitable that the Tigers would score. Freshman quarterback Andrew Body completed three passes and scrambled for 20 yards to set up Howard’s third TD run.

Body completed 28 of 35 passes for 338 yards and led his team with 85 yards rushing on 16 carries. He repeatedly gouged the Southern defense which had trouble pressuring him, covering receivers and getting ball carriers on the ground while allowing 576 yards.

The Jaguar offense and special teams had issues, too. Southern had 529 yards but freshman running back Kobe Dillon lost a fumble on first and goal at the 4-yard line and Luke Jackson missed two of three field goals.

Devon Benn rushed for 151 yards, Dillon 96 and wide receiver Marquis McClain got Southern back into the game with a 65-yard scoring run after the Tigers took a 21-10 lead at the start of the second half. McClain also caught six passes for 96 yards, both career bests.

Southern’s ability to run the ball and the defense’s inability to stop TSU factored into Rollins’ decision to gamble on fourth down. Brian Jordan led Southern with eight tackles.

“I felt really confident in our offensive line,” Rollins said. “We rushed for 322 yards, so I thought we could get one to ice the game. It’s debatable whether we got it or not, but at the end of the day we didn’t. I’d make that call again.

Southern working to fix defensive miscues ahead of UAPB game

After being lit up for five touchdowns and 576 yards by Texas Southern’s offense, the Southern University defense is happy to move on to anoth…