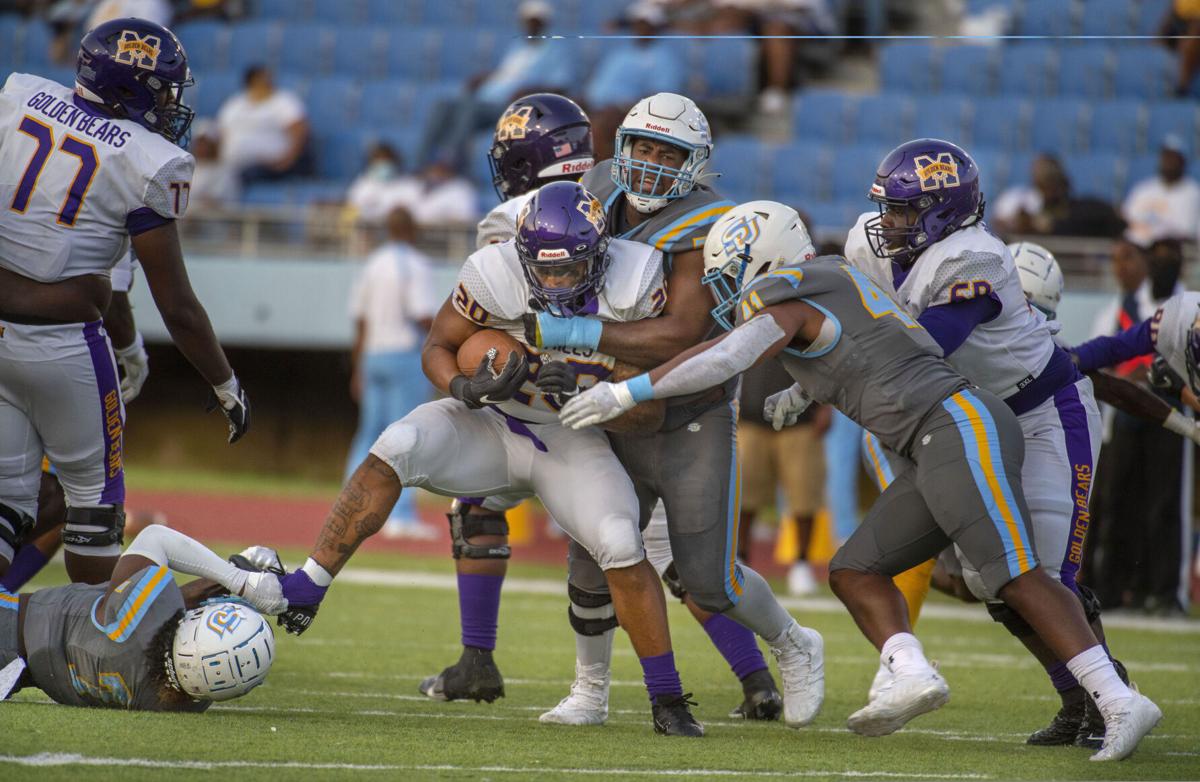 Southern University safety Jakoby Pappillion (7), left, holds on to the foot of Miles College running back Kingston Davis (20), as defensive tackle Davin Cotton (54), center, and linebacker Ray Anderson (41), right, swarm to make the tackle in the first half of the Pete Richardson Classic, Saturday, Sept. 11, 2021 at A.W. Mumford Stadium.Miles College led 17-13 at halftime. 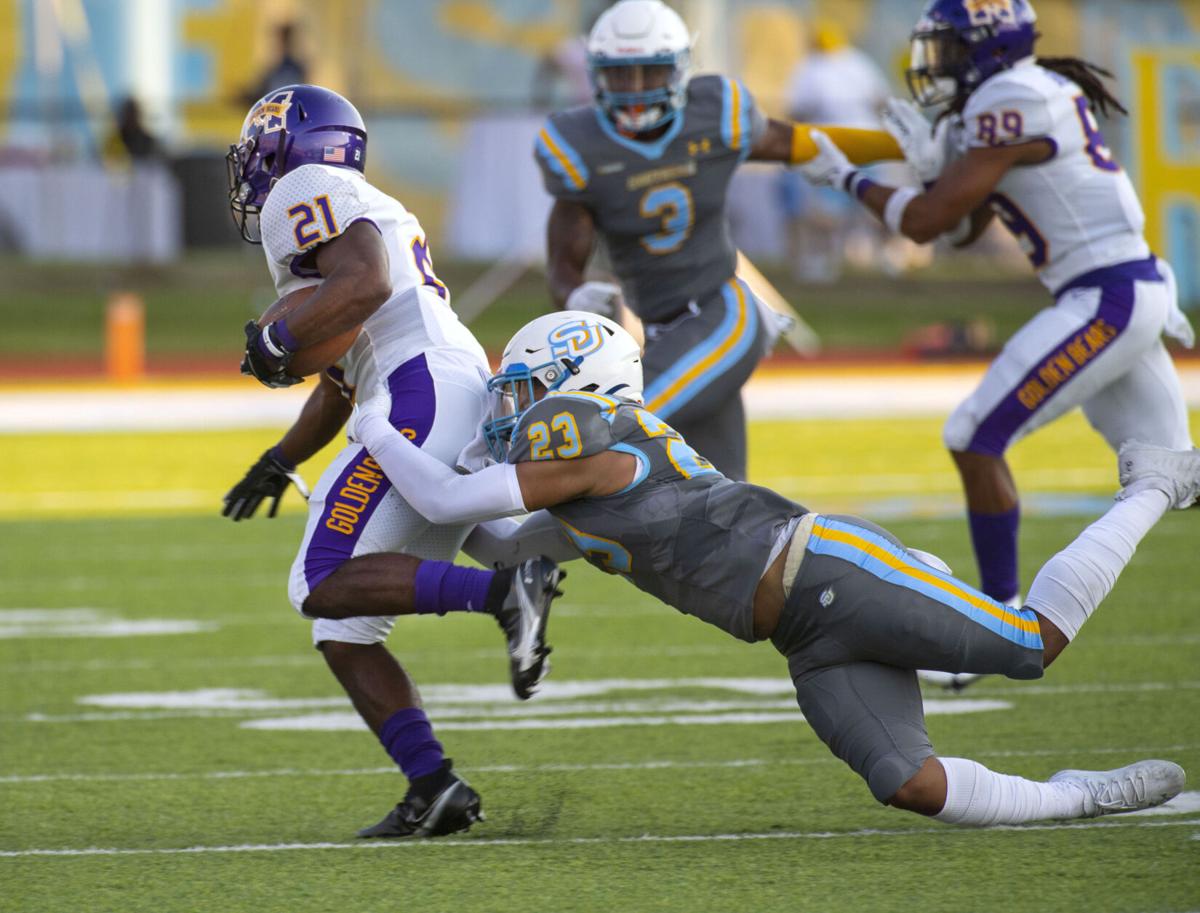 Southern University safety Jakoby Pappillion (7), left, holds on to the foot of Miles College running back Kingston Davis (20), as defensive tackle Davin Cotton (54), center, and linebacker Ray Anderson (41), right, swarm to make the tackle in the first half of the Pete Richardson Classic, Saturday, Sept. 11, 2021 at A.W. Mumford Stadium.Miles College led 17-13 at halftime.

When asked specifically what he’d like to see his football team do better Saturday, Southern coach Jason Rollins didn’t hesitate and didn’t pontificate.

“Tackling” was his one-word answer with the question still echoing in Tuesday’s Zoom news conference.

Rollins watched his Jaguars defenders bounce off Miles College ballcarriers like duckpins during the first half as the Division II visitors led 17-13. He wants that remedied quickly with Rollins’ alma mater McNeese State (0-2) coming to A.W. Mumford Stadium for a 6 p.m. kickoff.

“We need to be a better tackling team,” Rollins said. "Great defenses tackle well. We also need improvement in the penalty department. We tackle every day, much of the same but emphasize it more. The more film you see of yourself doing things the wrong way, it’s easier to correct.

“We had bodies on bodies. Everyone was in a gap; we were gap-sound. That 225-pound running back was running through there and there was a lot of grabbing instead of tackling. It’s been addressed. Now we have to practice it as well.”

Rollins and the defensive staff managed to get some of the issues corrected at halftime. Miles rushed for 143 yards on 25 carries, 5.7 yards a pop. In the second half, it was 20 for 57. Total yards dropped from 265 to 137.

While the message will be emphasized this week, the Jaguars might find themselves shorthanded on defense. Defensive end Jordan Lewis left the game in the second quarter with a shoulder injury and did not return. Defensive end Jalen Ivy was ejected in the second half and will sit out the first half this week.

Southern will also likely be without running back Jerodd Sims for the third consecutive game.

“Hopefully they’re doing well; we’re planning for them to play,” Rollins said of Lewis and Skelton. “How much we’re not sure, but we’re planning for both to be available. (Sims) we’re hopeful but right now it’s not looking like he will be. I would say no.”

McNeese (0-2) is coming off a 34-7 loss to LSU and making a second consecutive trip to Baton Rouge. It’s the third meeting between the schools with the Cowboys winning both times. The last was a 34-28 decision in Lake Charles in 2019.

The Cowboys are in their second season under former LSU assistant and Louisiana high school coach Frank Wilson. Rollins and Wilson are longtime friends with Rollins coaching on Wilson’s staff at Texas-San Antonio from 2016-19. They’ve known each other since both were grad assistants, Wilson at Nicholls State and Rollins at McNeese.

“McNeese is a tradition-rich program,” Rollins said. “They play a very physical brand of football, strong in the trenches on both sides and very athletic on the edges. They’re a mirror image of us. They start a sixth-year quarterback (Orgeron), which is rare.

“(Wilson) knows me well and I know him well, so we neutralize each other,” Rollins said with a smile.

Southern is ranked No. 7 in both the BOXTOROW HBCU media and coaches’ polls released Monday. Alabama A&M, Jackson State and Arkansas-Pine Bluff were the top three in each ranking.

Lack of game video on Miles College hampered Southern’s preparations last weekend, but this time the Jaguars coaching staff doesn’t have to re…