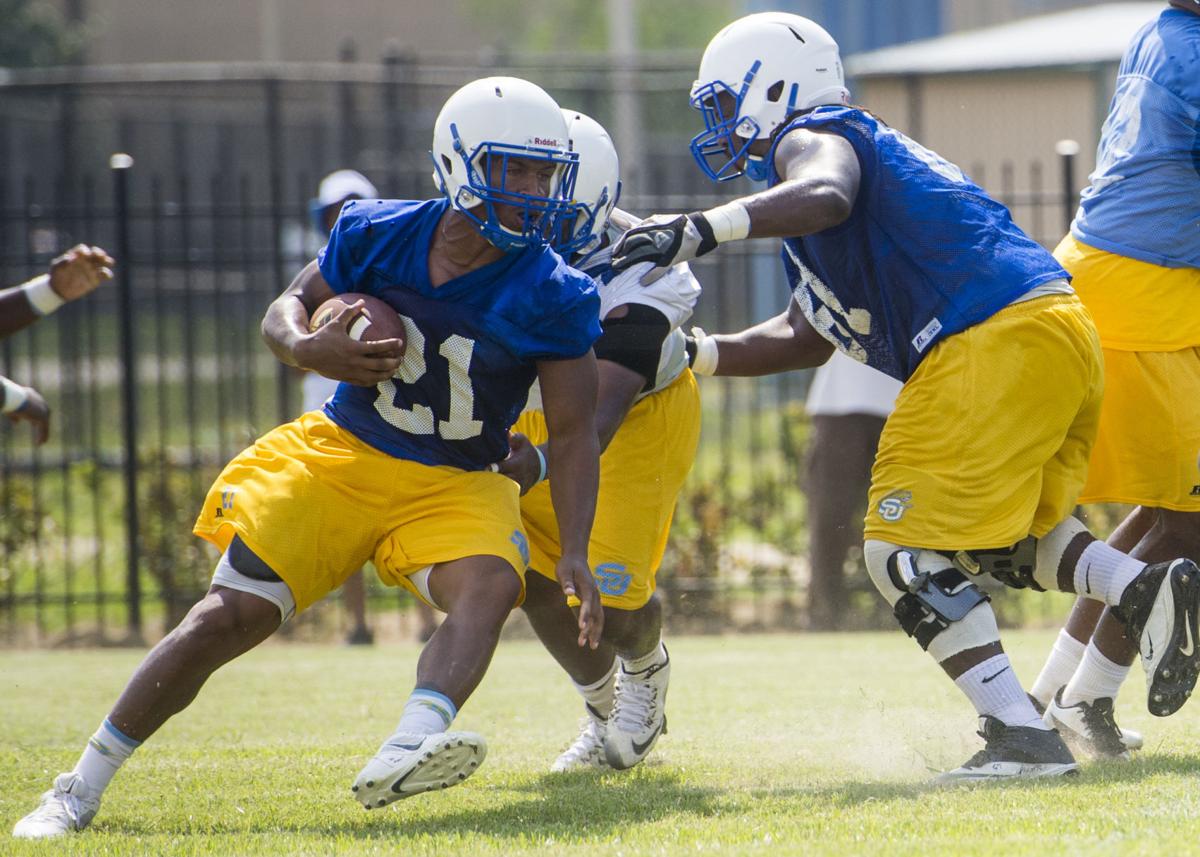 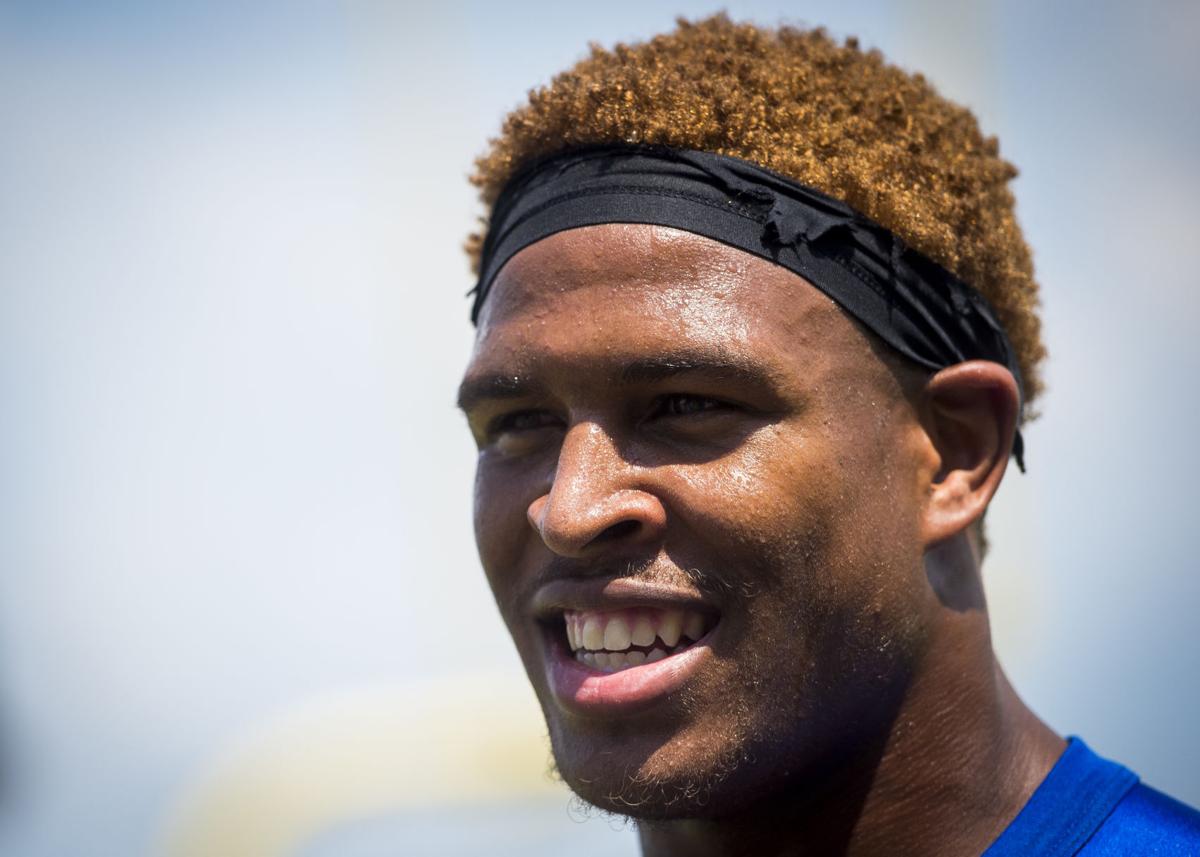 Southern running back Lenard Tillery speaks to reporters before an afternoon football practice on Southern University's campus on Thursday, August 4, 2016. 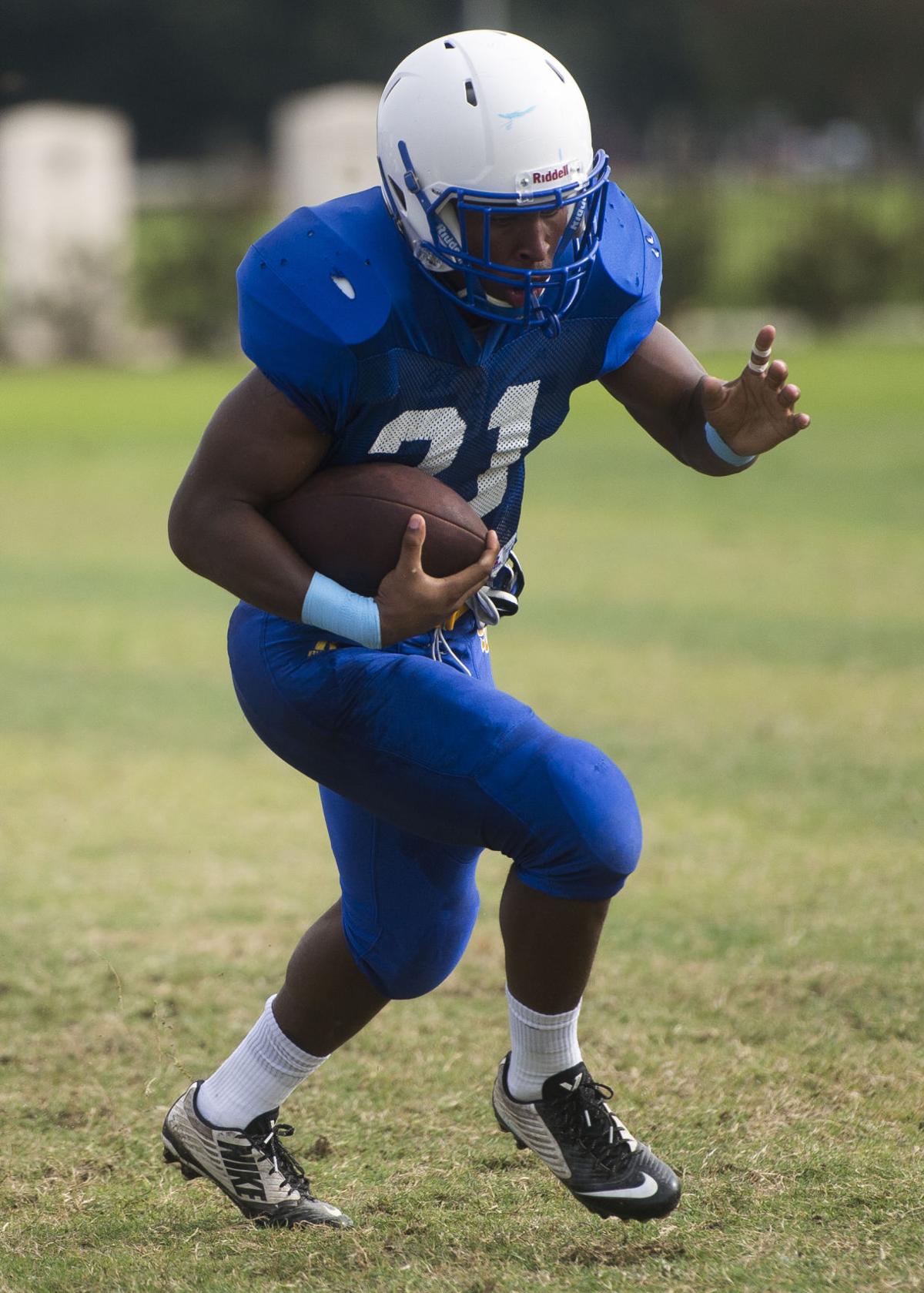 Southern running back Lenard Tillery (21) runs with the ball during morning practice at Southern's campus in Baton Rouge on Wednesday, August 10, 2016.

Southern running back Lenard Tillery speaks to reporters before an afternoon football practice on Southern University's campus on Thursday, August 4, 2016.

Southern running back Lenard Tillery (21) runs with the ball during morning practice at Southern's campus in Baton Rouge on Wednesday, August 10, 2016.

The audacity of young Lenard Tillery was something else. It came easy as a byproduct of his confidence.

Here came this true freshman walk-on to the Southern football team from nearby McKinley High School with the goal of being the starting running back in his sights. Who did he think he was?

For one, he thought he was the best. He did not care about scholarships or depth charts or tenure. He practiced with the conviction that the job was his to win.

So Tillery can honestly say he was shocked when he traveled with the Jaguars to their 2012 season opener and learned on that trip he would be redshirted.

“I’m a little — I’m not going to say crazy, but I think differently,” Tillery said. “They didn’t tell me until the day of the first game. We were playing New Mexico, and I had traveled. I was thinking I was about to go up there, get a couple carries and get my season started, but they decided they were going to redshirt me. At that moment, I was like, ‘They’re sleeping on me. They don’t know; I could make a difference right now.’ ”

The humility of present-day Lenard Tillery was earned, like just about everything with Tillery, the hard way. He’ll tell you there is no other way, because life is hard.

That first real sense of rejection was Tillery’s "A-ha!" moment, though he didn’t necessarily think of it like that at the time. Before he became truly humble, he only saw an injustice that needed to be rectified.

Then he did what he said he’d do.

“I was in the weight room, trying to do more. I was lifting with the seniors, trying to lift more than them,” Tillery said. “At practice, I was on the scout team, and that was when (current head coach Dawson) Odums was the defensive coordinator. I was going 100 percent."

Odums remembers dealing with that younger version of Tillery.

“He gave us fits,” Odums said. “He prepared for where he was going, not where he was at. He didn’t worry about, ‘Hey, I’ve got to go to scout team, I’m going to get disgruntled.’ He used it as an opportunity to perfect his craft.”

That was four years ago. Many things have happened between then and now, both triumphs and setbacks, but it turns out that young and audacious Tillery was pretty much spot on.

Heading into his senior year — what will be his fourth at the top of the Jaguars depth chart at running back — Tillery is Southern’s all-time leading rusher and is on pace to break the SWAC rushing record.

His vision of what he would become has played out just about as he expected, with one major exception: This part of Tillery’s humility was forced on him.

“I thought I was going to win four championships in a row,” he said. “Winning that first championship, it was just like, I’m not going to say it was what I expected, but I was like, ‘This is definitely how it’s supposed to go.’

“That next year coming back, I had the same mindset, and when we lost the championship, it was devastating. It took me two or three weeks to get over it. I was sitting in my room, thinking, ‘Man, it was not supposed to be like this. We were supposed to be a dynasty.’ After last season, it just brought me back to earth.”

'Everyone's coming for the top'

It’s necessary to point out that there hasn’t been just one stumbling point for Tillery. His career progression is more human than Hollywood. The demotions and failures have been as numerous as the successes.

This is part of what Tillery likes about his university. It is, to Tillery, an accurate depiction of the real world.

“Southern really teaches you life lessons throughout everything, and that’s one of the reasons I decided to come here,” he said. “I felt that, coming out of Southern, I’d be a better man. … It’s taught me a lot about myself more than anything. It’s given me strength moving forward. I feel like I could do anything at this point, as long as I keep faith in the process, keep faith in God, keep faith in myself — then I can do anything.”

A simpler version of that mantra must’ve been playing on repeat in Tillery’s head when he found out he was not as good as he thought he was in the fall of 2012.

He got after it with the vigor possessed only by someone who felt scorned.

Along the way, his determination sometimes was pushed with a boost from unexpected sources.

“The girls would say, ‘Man, it’s Saturday but the team’s out of town and you’re still here,’ ” Tillery said. “There ain’t too much you could tell them.”

Now Tillery can look back on and be thankful for that year, when then-Southern coach Stump Mitchell effectively told him he was not as good as he thought he was.

In that year off, he developed a much deeper grasp of the playbook and healed some nagging injuries from his senior year of high school. He became faster and stronger thanks to those spirited sessions in the weight room. Most importantly, he saw he was going to have to earn chance to shine.

“Ever since then, I’ve been prepared,” Tillery said. “Even if the coach tells me, ‘You’re fifth-string, Tillery,’ in my mind, I’m saying, ‘You’re first-string. Don’t worry about that; your time’s going to come.’

“You’ve just got to work hard and be prepared for your moment. If it comes and you’re not ready for it, you’ll be put behind the burner real fast.”

When the moment came, Tillery seized it. After being held out of the lineup for the first two games of his redshirt freshman season, he was thrust into action against Prairie View A&M in the third game and responded with 75 rushing yards and three touchdowns.

Four games later, he had his first 100-yard rushing game with a 136-yard effort against Arkansas Pine Bluff. He went on to finish that season as Southern’s leading rusher with 784 yards and nine touchdowns.

He persevered at the beginning of the next season, when a pair of transfers from Football Bowl Subdivision schools threatened to cut his workload. He carried the ball just 23 times in the first three games before ripping off another big game against Prairie View to cement himself as the top option in the Jaguars backfield.

He has stayed there, and his status as the first-team running back is no longer disputed. Tillery aims to keep it that way.

“I come out and I try to have a perfect day. If I have one missed assignment, then I had a bad day. That’s just the way it is. I’m striving for perfection.”

It’s not just striving to be perfect though. Sometimes, Odums sees the running back who is trying to prove why he should’ve always been the first-stringer from Day 1. He’s running like he’s got something to prove.

“When you see him play, he runs as if he’s chasing something bigger than him,” Odums said. “That’s called motivation. … We’re grateful he’s on our team.”

If he holds true to his past two seasons, when he ran for 1,196 and 1,192 yards, he should break the record sometime around Southern’s eighth or ninth game this season. That’s a tremendous achievement for a walk-on — even one who was expecting to be the man from the day he walked on campus.

“I think about (the record) all the time,” Lee said. “Knowing that your running back that you blocked for the past three or four years is the all-time leading SWAC rusher, that makes you feel good as an offensive lineman. We’re going to make sure he gets what he needs.”

Tillery spends little time thinking about the record. It is, after all, what he was expecting to do since Day 1. He’s focused instead on the part of his career that has not gone according to plan.

“The small things like personal goals, that happened,” Tillery said. “But team goals are always going to come before personal goals. Championships, I’ll take that before records every day.”

He spends much of his time reflecting on his redshirt freshman season, his worst from a statistical standpoint but also the year Southern won the SWAC championship game. What made that team different from the past two, which did not win a championship?

“What were the small things we did? What was the discipline we had? What were the leaders we had?” Tillery said. “Just reviewing that and trying to duplicate the process. You’re not going to duplicate it because you have guys that leave every year, but you have to find out, 'What was that like?' Seeing Alcorn win two championships in a row, I’m thinking, ‘That was supposed to be us.’ ”

One of the elements that championship team had was quarterback Dray Joseph, who was the one who drilled into Tillery the idea that personal accomplishments mean nothing if the team doesn’t win. So while Tillery has taken charge as one of the obvious leaders on the team, he has made sure to defer to quarterback Austin Howard on the leadership front.

“He lets me play my role as a leader, but anything I miss he picks right up on,” Howard said. “He oversees everything. He’s just a tremendous guy, period. Not just Lenard the football player. He’s my brother outside of these fields. He keeps me in line, he checks on me and how my grades are, how I’m getting the offense. He’s just an overall leader as a person — and a hell of a football player.

Lenard Tillery was and is audacious. For the most part, his bombastic vision for how his career would play out came true — just not the part that was most important to him.

There’s still time to end it the right way, though.

“Championships are going to be remembered,” Tillery said. “To not have four championships in a row is unfortunate, but I’ll take two: freshman year and senior year.”

Setting the record straight: How much does Lenard Tillery actually need to break the SWAC rushing record?

Southern senior running back Lenard Tillery has a chance to break the SWAC’s all-time rushing record this weekend against Alcorn State.

'Just beautiful:' As he nears the SWAC rushing record, Southern's Lenard Tillery keeps his focus on the next game

There’s this thing about Lenard Tillery that Austin Howard said a lot of people don’t know, something that should provide an extra element of …

It took a little while, but the man who rushed for more yards in Southwestern Athletic Conference history than Walter Payton has found a home.