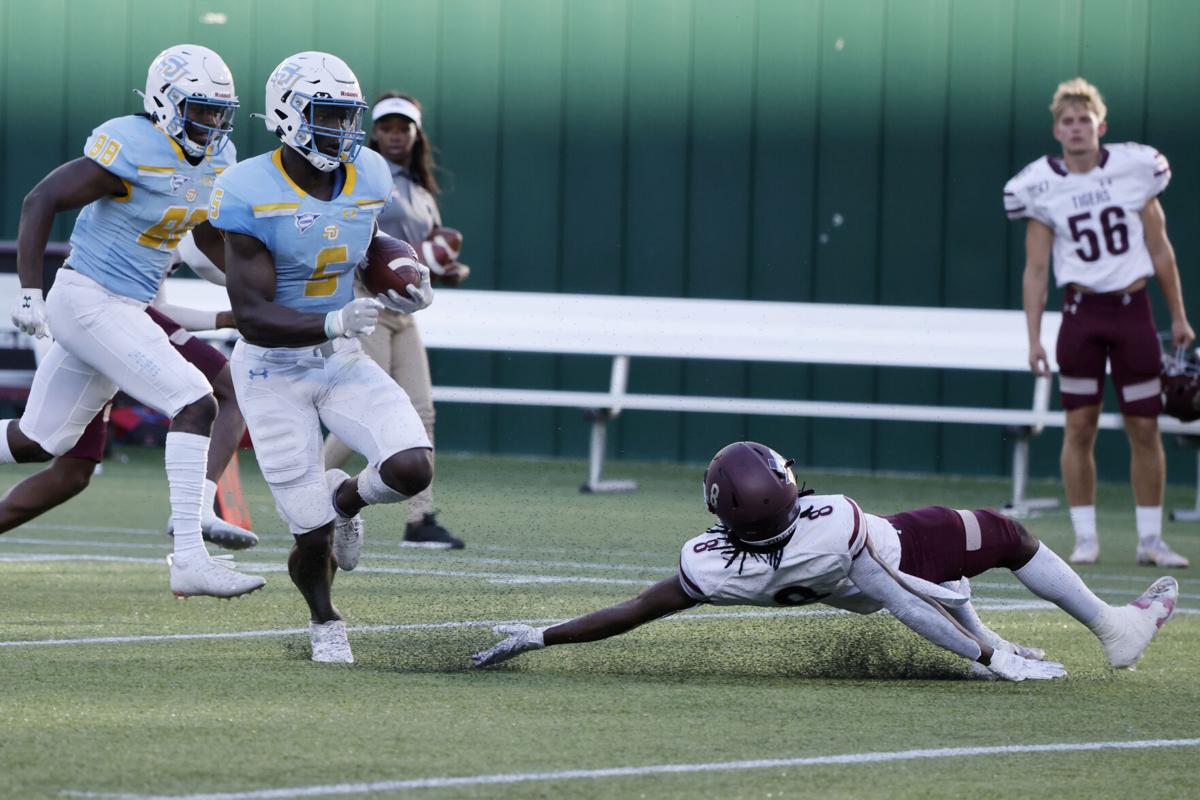 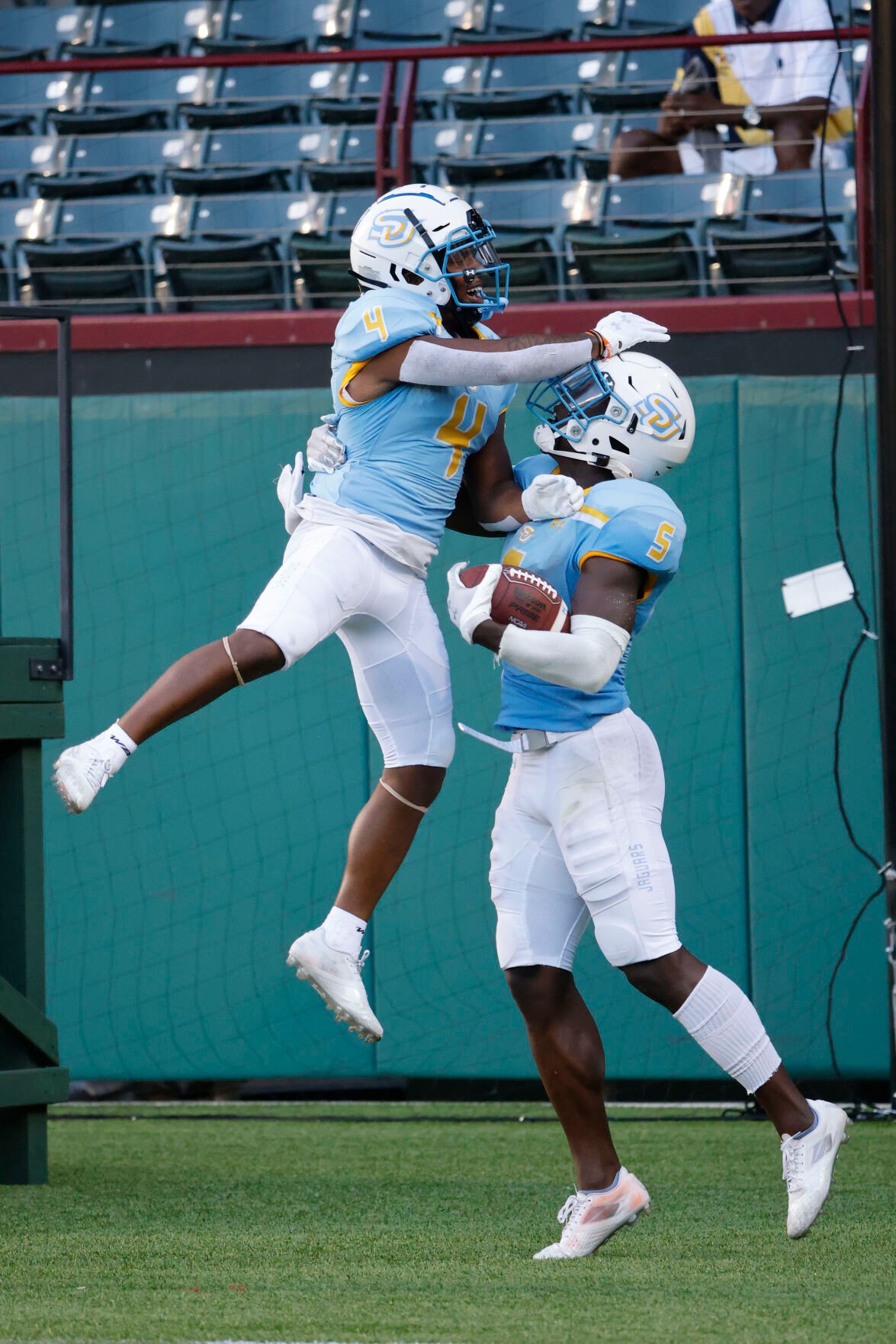 When Southern wide receiver Marquis McClain announced his transfer from Auburn last year, he came with something of a “wow” factor.

On Saturday, McClain delivered on the wow with a breakout performance in the Jaguars’ 35-31 loss to Texas Southern.

McClain caught a team-best six passes for 96 yards and came up with a huge play to get Southern back into the game when he sped 65 yards on a reverse after the Jaguars had fallen behind 21-10 at the start of the second half.

An athletic 6-foot-3 and 218 pounds, McClain battled sore hamstrings and crept through the spring season, when he caught 10 passes for 167 yards while adjusting to his new surroundings. COVID-19 pandemic issues also slowed his progress.

But on Saturday, he matched up favorably against the Tigers.

“He had to get comfortable with the offense,” Southern coach Jason Rollins said. “Coming from Auburn where everything was on the wristband — ‘On this play, run this route’ ... ours is more pro-style, where it’s concepts and schemes. You run routes a different way. He’s exactly where we thought he would be.”

Despite missing the season opener because of a clerical grad school issue, McClain is the Jaguars’ third-leading receiver behind Jamar Washington and Ethan Howard with 12 catches for 167 yards and two touchdowns. He has already matched and surpassed his five-game spring output. With Washington out because of an ankle injury, McClain picked a good time to shine.

“I was hurt a lot in the spring. My body was beaten down,” said McClain, who spent three seasons at Auburn and played in 38 games, catching just three passes for 84 yards. “It was weird year with the whole COVID thing and not working out how I was supposed to. It’s been a big turnaround. The hamstrings, I’ve got them under control now.

“Going into (the) Mississippi Valley State game, that was a time we started turning things around with Bubba (McDaniel) playing. From there we’ve gotten better every day, every week.”

McClain gives the Jaguars a big-bodied receiver like Hunter Register, the team’s leading receiver in 2019. He’s a multi-talented athlete who played basketball and was a sprinter and jumper on the track team at Crestview (Florida) High School. He also plays five musical instruments.

Southern linebacker Brian Jordan said he isn’t surprised at McClain’s emergence and that he “is a load” to cover in practice when Jordan played safety.

“He’s big, fast, physical, strong — a great asset to our team,” Jordan said. “He’s going to keep doing big things. He works hard in practice, always giving 110%. Every rep is like a game rep for him.”

McClain said he struggled with his transfer decision but was well received in Baton Rouge.

“It was a pretty tough decision,” he said. “I had a lot of schools interested in me that I had interest in. I either couldn’t get into them because of the grad school requirements, or it just didn’t work out. Southern reached out at a perfect time, and I trusted them.

“It was different, coming to Louisiana by myself, no family here, no friends. But I came here for one thing: to play ball. I kept that in mind and trusting coach (Zach) Grossi and the wide receiver coaches. It’s been good.”

McClain said he’s hoping to keep improving against a team, Arkansas-Pine Bluff, against whom he had his best game during the spring. He caught six passes for 58 yards, including a 13-yard scoring pass from backup quarterback John Lampley in a 33-30 loss.

The Jaguars visit UAPB for a game at 2 p.m. Saturday.

“They like to play man,” he said. “We’ve got to work on getting off press coverage. What they showed last year is likely what we’re going to see this year. We have to go win one, especially playing a West team in our conference. It’s a win we need. They’re as good as anybody we’ll play.”

Southern travels to Arkansas-Pine Bluff with urgency: 'It’s going to be a four-quarter fight'