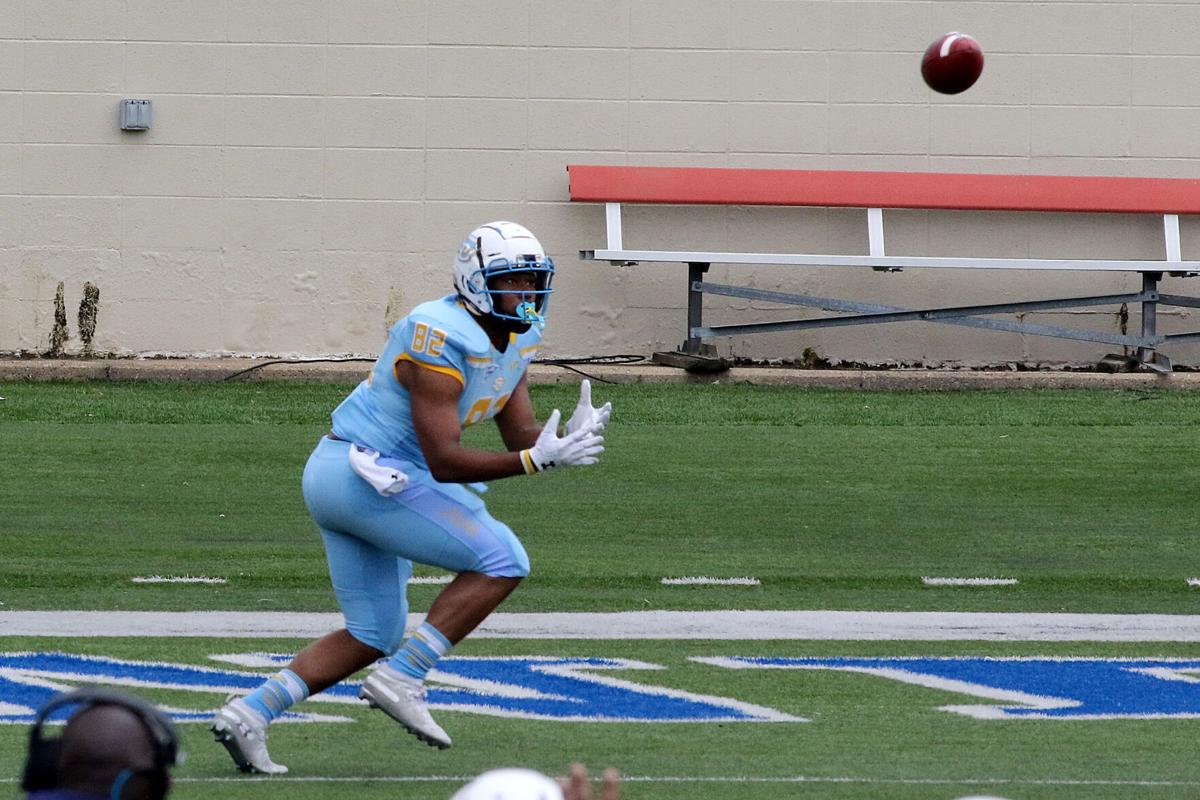 Southern tight end Travis Tucker catches a touchdown pass in the Bayou Classic on Saturday at Independence Stadium in Shreveport. 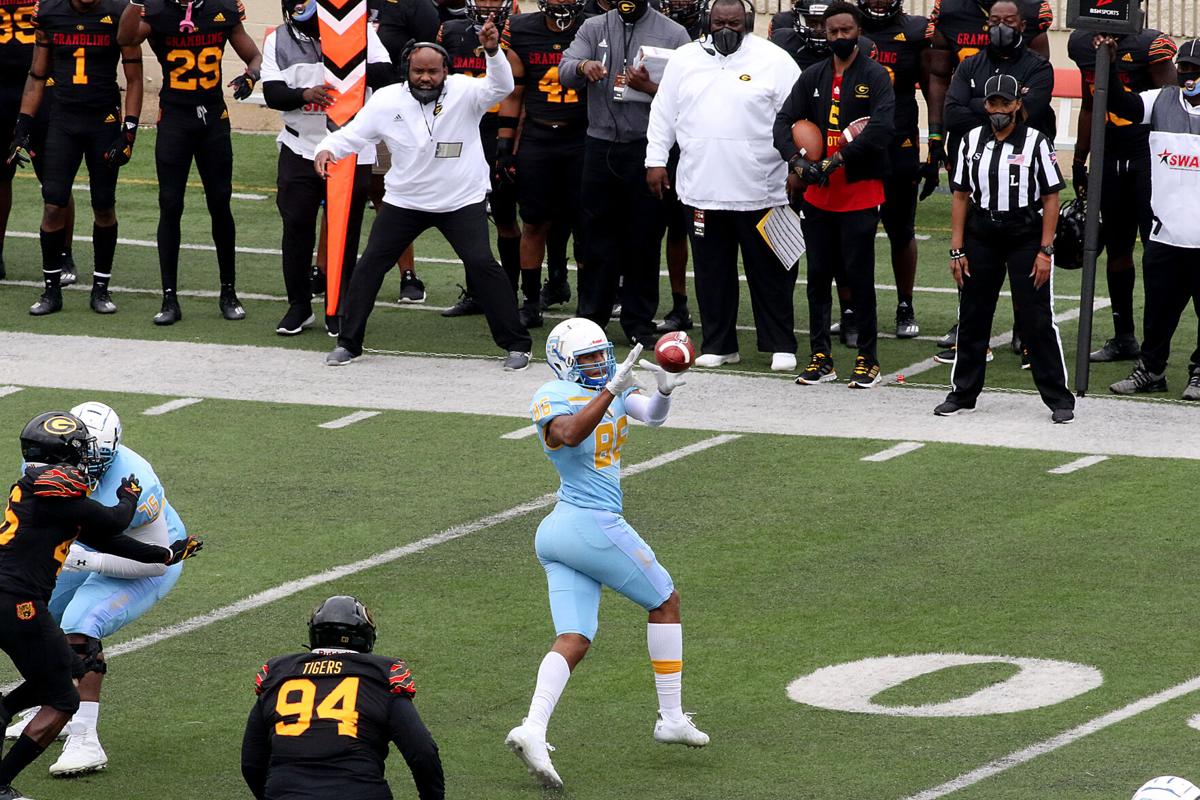 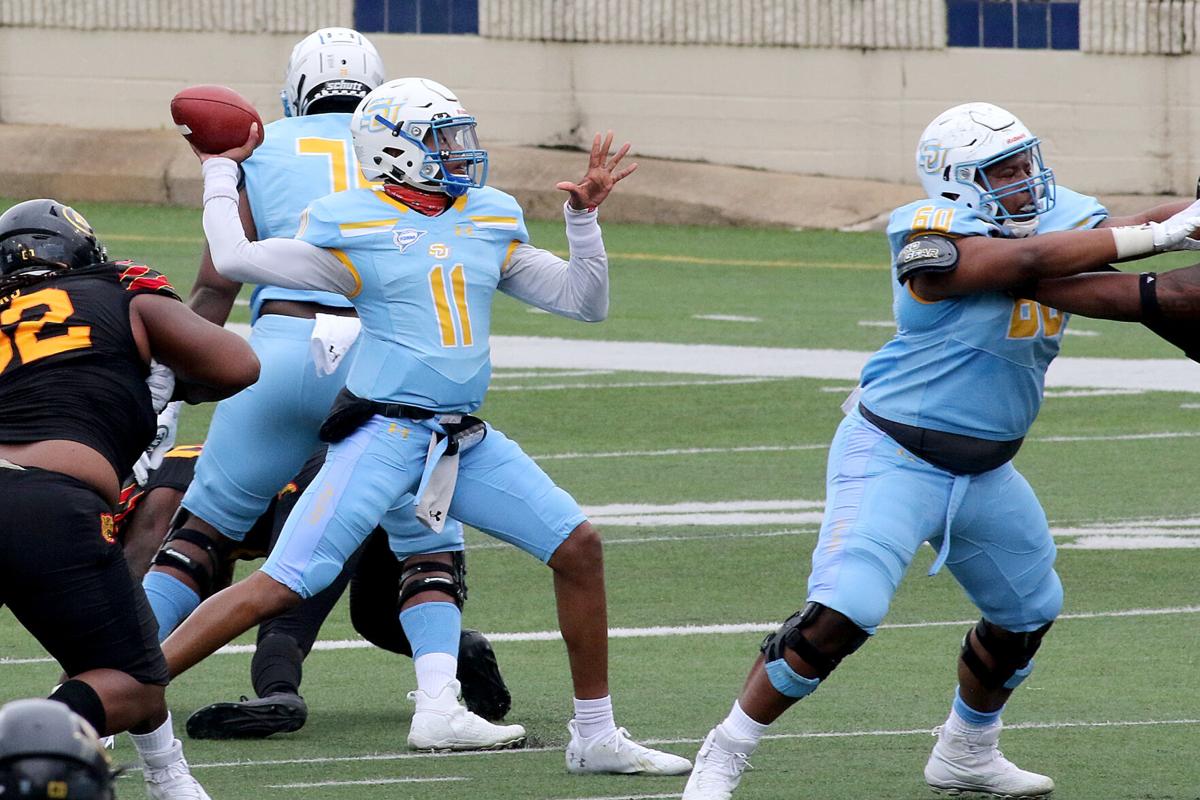 Southern quarterback John Lampley throws a pass in the Bayou Classic on Saturday at Independence Stadium in Shreveport.

Southern tight end Travis Tucker catches a touchdown pass in the Bayou Classic on Saturday at Independence Stadium in Shreveport.

Southern quarterback John Lampley throws a pass in the Bayou Classic on Saturday at Independence Stadium in Shreveport.

SHREVEPORT — More than once during six weeks of spring practice, Southern coach Dawson Odums said tight ends would have a big part in the Southern offense under first-year coordinator Zach Grossi.

Tight ends have made an impact in the Jaguars running game and Travis Tucker became the third Southern tight end to score a touchdown this season, joining Ethan Howard and Gregory Perkins. Tucker caught a 22-yard scoring pass from John Lampley in the second quarter of the Jaguars' 49-7 pounding of Grambling in the 47th Bayou Classic.

Perkins appeared to score on a 48-yard connection with third-string quarterback Bubba McDaniel in the fourth quarter but was ruled to have stepped out of bounds. He had to settle for a 43-yard reception.

Jadarion Davis is actually listed as the starting tight end because he is the best blocker in the group, but the Jaguars use multiple formations with two or three at a time. Even though Davis has yet to catch a pass, the position has become vital.

“The way we do it with our tight ends gives us an added advantage in the running game,” Odums said. “We use one, two or three tight ends. They really change the landscape of the offense. They allow us to add length to the offensive line by adding another bubble. They also can spread out and become receivers. If we can keep them healthy, the sky is the limit on how good they can become. They’ve worked through some injuries.”

Howard led all receivers in Saturday's game with five catches for 80 yards. He is now Southern’s leading receiver this season, with 14 catches for 240 and two TDs. Collectively, Southern tight ends have caught 18 for 369 yards and four touchdowns.

“Ethan Howard is a true freshman that has some special ability,” Odums said. “That room is getting better. Coach (Chris) Browne does a great job of coaching those guys.”

Southern gambled early and broke the coaching axiom about taking points off the board. Cesar Barajas made a 29-yard field goal on Southern’s first possession, but Grambling was penalized 5 yards for being offside on a fourth-and-six.

Odums elected to go for the first down, and Devon Benn picked it up with a 4-yard run to the Grambling 3. Skelton scored on a keeper on the next play.

The Jaguars gambled on another fourth down to keep a drive alive, as Jerodd Sims went 8 yards to set up a 22-yard scoring pass from John Lampley to Tucker.

Insight from the coach

Southern lost starting strongside linebacker Malik Ellis early in the second quarter when he was ejected for targeting on a Grambling kickoff return. Ellis missed the remainder of the half and the second half but will be eligible to return in Southern’s next game.

Southern quarterback Bubba McDaniel saw his first action of the season and scored his first TD with a 5-yard TD run in the fourth quarter after missing much of the season with a hand injury.

Running back Craig Nelson scored his first touchdown this season on a 4-yard run in the first quarter. Running back Travien Benjamin had his first pass reception with a 29-yard catch to set up a TD.

The last (and only other) time the Southern-Grambling game was played in Shreveport was 1973, which was also the last time the meeting was not called the Bayou Classic. Grambling won that game, 19-14.

The first year of the Classic was 1974 and the game was played in Tulane Stadium. It moved to the Superdome the following year. The only other time the Bayou Classic was not played in New Orleans was 2005, because of the aftermath of Hurricane Katrina. The game was moved to Houston where Grambling won, 50-35.