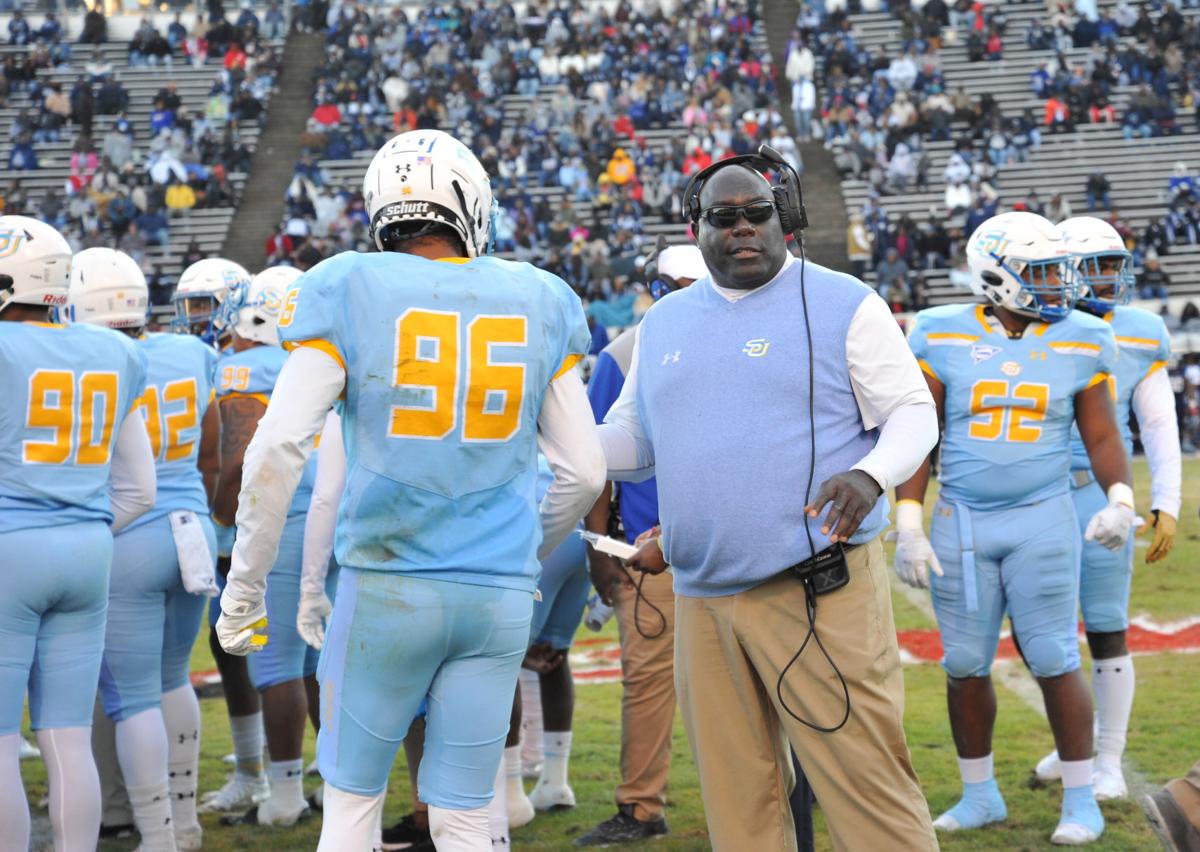 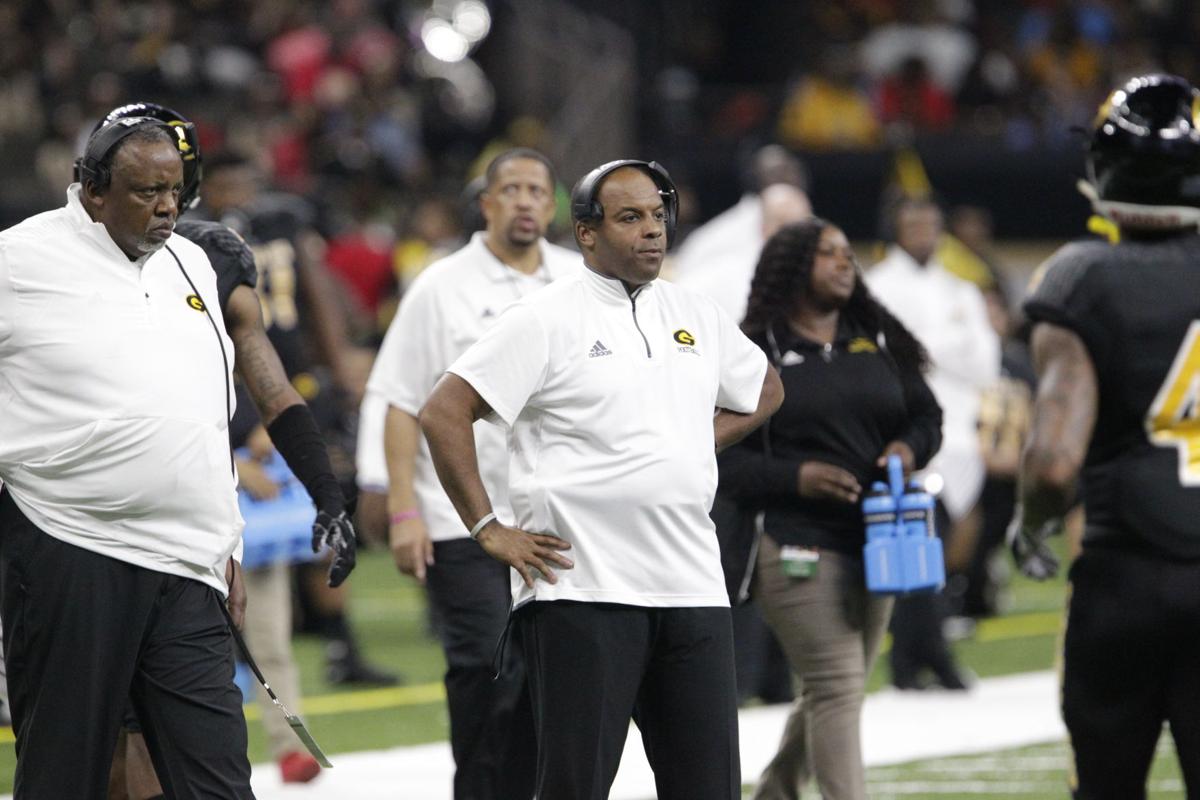 Grambling State head coach Broderick Fobbs watches the action against Southern University during the second half of the Bayou Classic Saturday, Nov. 24, 2018, at the Mercedes-Benz Superdome in New Orleans. Southern won 38-28.

Grambling State head coach Broderick Fobbs watches the action against Southern University during the second half of the Bayou Classic Saturday, Nov. 24, 2018, at the Mercedes-Benz Superdome in New Orleans. Southern won 38-28.

Two month ago, the 2019 Bayou Classic was looking like it might determine which Southwest Athletic Conference team avoided the bottom spot of the West Division.

Southern stumbled out of the gate with five turnovers at McNeese State and started 1-3. Grambling, beset by injuries and inexperience, started 0-4 with a pair of conference losses in that mix.

But as if to fulfill an annual prophecy, both teams righted themselves to make Saturday’s 4 p.m. game in the Mercedes-Benz Superdome packed with relevance.

Both the Jaguars (7-4, 5-1) and the Tigers (6-4, 4-2) have smoothed out the rough edges to decide which team wins the division and plays at Alcorn State for the SWAC title and a trip to the Celebration Bowl.

“A sign of a good team is how they play in October and November,” said Southern coach Dawson Odums, who is 4-3 in Bayou Classic games. “These teams got hot at the right time.

“It’s the fifth year we’ve been here playing for the division title. It’s good for football, good for the SWAC when these teams are playing well.”

Southern has won six of its past seven games — losing only at Alcorn on Oct. 26 — while Grambling has put together the longest winning streak in the league this season with six games. The Tigers did it the hard way, playing and beating Alabama A&M and Jackson State as non-conference foes.

“We went back to square one,” said Grambling coach Broderick Fobbs, who is 2-3 against Odums in the Classic. “We had a lot of young kids forced to play earlier than they were supposed to. We ran into a buzz saw. We competed but lost some guys, then corrected some things and started playing better.”

Fobbs cited the third quarter of the Oct. 5 Jackson State victory as a turning point. Unable to run the ball, the passing attack was forced to mature and has markedly improved.

For Southern, it was a frustrating loss at Florida A&M on Sept. 21 when the Jaguars rallied from a 17-0 deficit to take a 21-19 lead in the fourth quarter but ran out of gas in a 27-21 defeat. The Jaguars responded the next week with their most complete victory, a 31-7 win at Arkansas-Pine Bluff.

“We’ve grown tremendously,” Odums said. “We can win any kind of way, blowouts, close games. ... that’s our team getting better in October and November.”

Odums said the key to taking down Grambling is the same as last year — winning in the trenches and making plays at the end of the game. Southern out-rushed Grambling 247-94 and clinched the game with a 65-yard touchdown drive after Grambling cut a 31-13 Southern lead to 31-28 in the fourth quarter.

Southern, the SWAC’s top-ranked run defense, gave up 308 yards to Jackson State in its last game. In  Grambling, the Jaguars face another run-oriented team. Quarterback Geremy Hickbottom leads a group that has four rushers with at least 238 yards.

The Jaguars and Tigers are ranked 1-2 in the league in rushing offense.

Southern answers with its own running quarterback. Ladarius Skelton has been a devastating runner but also an inconsistent passer. He’s rushed for 459 yards and six TDs in his past three games and is backed up by tailback Devon Benn, who has rushed for 722 yards and six TDs.

When Southern does pass, Skelton has established a strong connection with leading receiver Hunter Register, who has 35 catches for 533 yards and nine touchdowns. Register has caught at least one touchdown pass in each of the past six games.

Southern preparing for Grambling's tough defense ahead of Bayou Classic

Southern’s front seven has been the heart of the defense, led by tackle Dakavion Champion and linebacker Calvin Lunkins. Champion is second on the team with six tackles for loss while Lunkins leads in overall tackles with 57. Jordan Lewis has 3.5 sacks and end Joe Davis a team-high eight tackles for loss.

Grambling may not be at full strength defensively. Defensive end Anfernee Mullins, who leads the team with seven sacks and 11.5 tackles for loss, might not play after his arrest last week. But there is plenty of other talent with linebacker DeAndre McCarthy and defensive back Joseph McWilliams, a Southern Lab product and All-SWAC performer last season.

“They’re playing really good on defense,” Odums said of the Grambling hot streak. “This game is going to come down to whichever team makes the plays, on offense and on defense.”