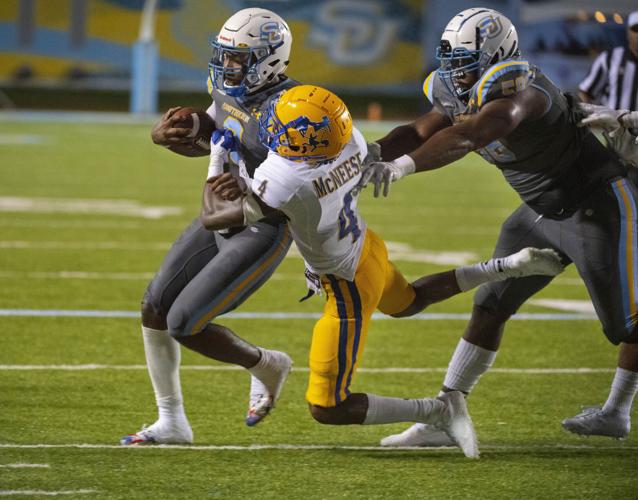 Southern University quarterback Ladarius Skelton (8) finishes a long run in the fourth quarter, finally brought down by McNeese State cornerback Corione Harris (4), Saturday, Sept. 18, 2021 in A.W. Mumford Stadium. SU offensive lineman Ja'Tyre Carter (58) adds what help he can at the end of the play. The Jaguars led 21-10 at the half, but came up short, 31-24. 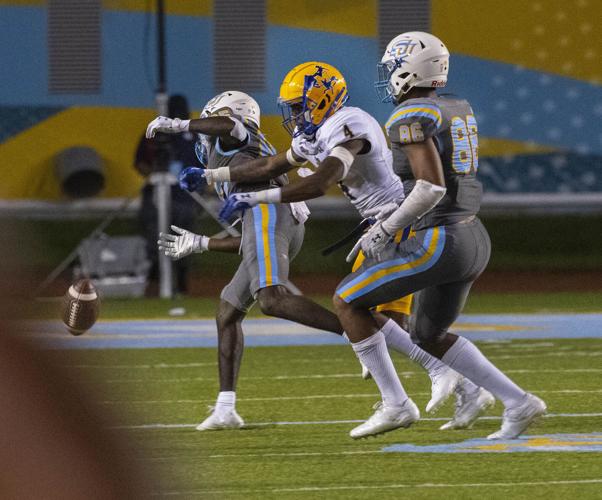 Southern University quarterback Ladarius Skelton (8) finishes a long run in the fourth quarter, finally brought down by McNeese State cornerback Corione Harris (4), Saturday, Sept. 18, 2021 in A.W. Mumford Stadium. SU offensive lineman Ja'Tyre Carter (58) adds what help he can at the end of the play. The Jaguars led 21-10 at the half, but came up short, 31-24.

One of the slogans for Southern under first-year coach Eric Dooley is “spot the ball,” which alludes to his penchant for fast-paced offense.

Three of the five players who are expected to join the Jaguars through the transfer portal sometime this summer are coming from teams that defeated Southern during the 4-7 season last fall. All five players tweeted their intentions to attend Southern in recent weeks.

The biggest name fills perhaps the biggest need for Southern in former Prairie View All-Southwestern Athletic Conference and HBCU All-American defensive tackle Jason Dumas, who appears to be following Dooley’s path. Dumas would be a nice addition since Southern will be without Davin Cotton, who is sitting out the season to rehab from surgery for a knee injury suffered last season.

Dumas (5-10, 230) was an all-state performer at St. James High School and had a monster season for the SWAC West Division champion Panthers in 2021. He played 12 games and had 38 tackles, 17½ for loss and among those 8½ sacks. He also had 11 quarterback hurries and three forced fumbles. In the Panthers’ 48-21 victory at Southern he had two sacks and a forced fumble.

A three-star recruit from Landry-Walker in New Orleans, Harris played three seasons at Kansas under former LSU coach Les Miles. He started 15 of 28 games, broke up nine passes and had an interception. But he also comes with some baggage, having been suspended for eight months because of felony arrests on drug and gun charges in January of 2020.

Harris was reinstated at Kansas in September of 2020 when as part of a plea deal the weapons charge was dropped and he agreed to serve five years of supervised probation. He played seven games that season but did not start and subsequently transferred to McNeese.

In five games as a sophomore in 2021, Bodden completed 44 of 102 passes for 476 yards and four touchdowns with four interceptions. His best game came in a victory against Alabama State when he completed 16 of 34 for 191 yards and three TDs.

Bodden went to Grambling as a three-star recruit from Christ the King Regional High School in New York. He had offers from FBS programs such as West Virginia, Baylor, Oregon and Cincinnati.

Zephaniah Maea is a native of Honolulu and played high school ball at Liberty in Las Vegas. He signed as a three-star recruit in the 2021 class and played four games with one tackle in 13 plays.

Fuller, who grew up in Reseda, California, was a first-team all-conference choice in the Pacific League where he caught 47 passes for 744 yards and six touchdowns in 10 games.

Southern will be looking for a deep snapper as last year’s starter Aarion Hartman is transferring to Jackson State.

Other Jaguars who have moved on include WR-RB Brandon Hinton, who is going to Clark University in Atlanta, and quarterback John Lampley, who is reuniting with former Southern offensive coordinator Chennis Berry at Benedict College.

Southern is holding its first Eric Dooley Football Camp for athletes entering grades nine through 12 this fall on June 4 at Jaguar Park. Registration is $45 and will begin at noon. The camp will be held from 1-5 p.m. For more information, make a request at sufootballrecruiting@gmail.com.