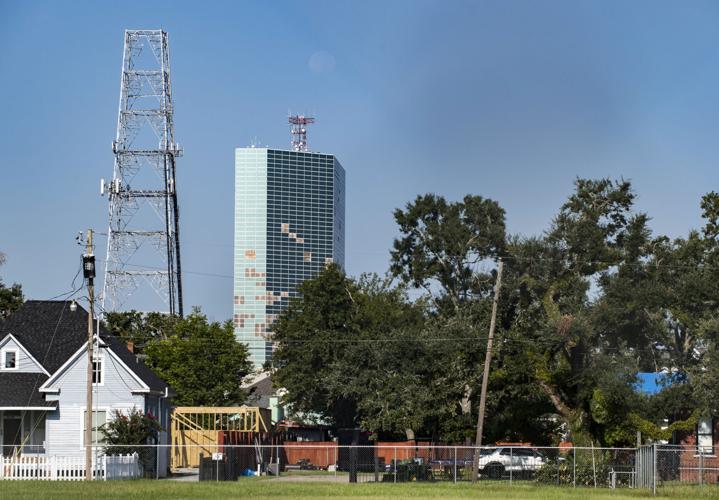 The still boarded Capital One Tower can be seen in the distance as new construction and a blue tarp are seen in the foreground Wednesday, August 25, 2021, nearly one year after Hurricane Laura passed through, in Lake Charles, La. 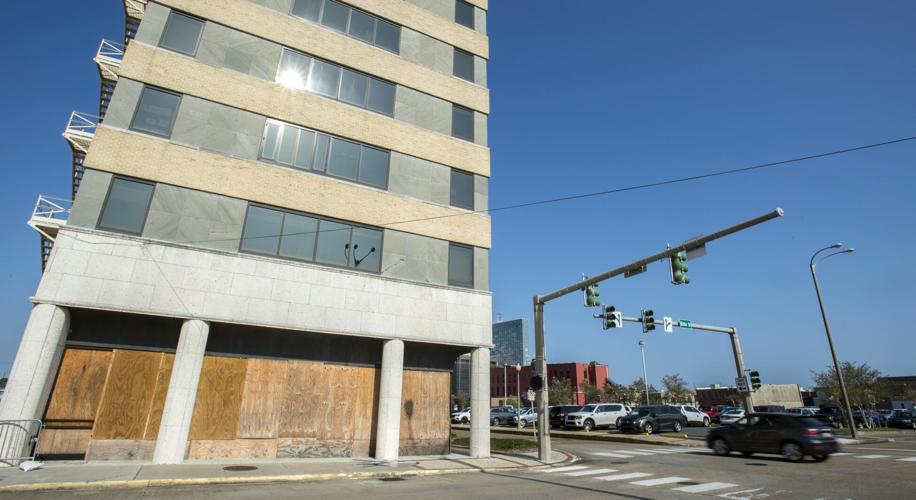 The still boarded Capital One Tower can be seen in the distance as new construction and a blue tarp are seen in the foreground Wednesday, August 25, 2021, nearly one year after Hurricane Laura passed through, in Lake Charles, La.

LAKE CHARLES – Gov. John Bel Edwards said Wednesday he would travel to Washington again next week as part of efforts to secure more disaster relief in the wake of the repeated hurricanes that have devastated parts of Louisiana since 2020.

Edwards spoke about relief efforts during an appearance at a rally in support of Democratic state Senate candidate Dustin Granger in Lake Charles, which is struggling to recover from four weather disasters that have hit the region since Hurricane Laura in August 2020. Laura, one of the most powerful storms to ever hit the state, was followed by Category 2 Hurricane Delta six weeks later, a severe freeze in February and flooding in May.

After more than a year, Congress finally appropriated some long-term disaster relief for southwest Louisiana at the end of September, but local officials, as well as the governor, say the amount – around $600 million – is not enough to adequately address the region’s dire needs, particularly housing. Congress must approve another spending bill ahead of a Dec. 3 deadline, and Edwards is hoping additional disaster relief for Louisiana can be included.

While Edwards focused his comments on relief for the Lake Charles area, he will certainly also push for further aid for southeast Louisiana following Hurricane Ida while in Washington on Monday and Tuesday.

“We really appreciate the almost $600 million that has been appropriated. That's more than a quarter of the total amount appropriated for the country in 2020,” he told reporters after the rally, referring to the $1.6 billion in relief set aside for 2020 disasters in the recent bill approved by Congress. “But quite frankly, it is inadequate to the task of a full and robust recovery, especially on that housing need.”

Edwards said he had meetings planned at the White House and with members of Congress.

Officials in southwest Louisiana have been vocal about their disappointment in the amount appropriated so far and the time it has taken. They have pointed to other regions that have received far more money in a much shorter timeframe and questioned why the Lake Charles area should be treated differently.

For example, the bill approved in September is expected to include a $2.7 billion down payment on Hurricane Ida aid, and more will surely be on the way.

Edwards had spelled out $3 billion in unmet needs for Laura, Delta and Hurricane Zeta, which hit southeast Louisiana in October 2020. He has said he would expect to receive around half of that in federal relief, which means the appropriation Congress recently approved falls about $1 billion short.

Southwest Louisiana has received more than $1 billion in immediate federal assistance following the two hurricanes, but long-term relief would allow the region to address housing and economic development damage, among other issues. Several thousand people are still believed to be displaced more than a year after the two hurricanes, while blue roof tarps and ruined buildings remain common sights.

In the state Senate race that brought Edwards to Lake Charles, Granger faces Republicans Jeremy Stine and Jake Shaheen. They are running in Saturday's vote to replace Ronnie Johns, a Republican who resigned to become chair of the state Gaming Control Board.

Congress on Thursday afternoon broke a partisan impasse that keeps the federal government operating for two more months and frees up $28.6 bil…

Big plans with a big runway: Historic Louisiana airport seeks to transform itself

LAKE CHARLES - It’s been a Cold War air base, a deserted strip used for drag races and driving lessons, and more recently a site for training …