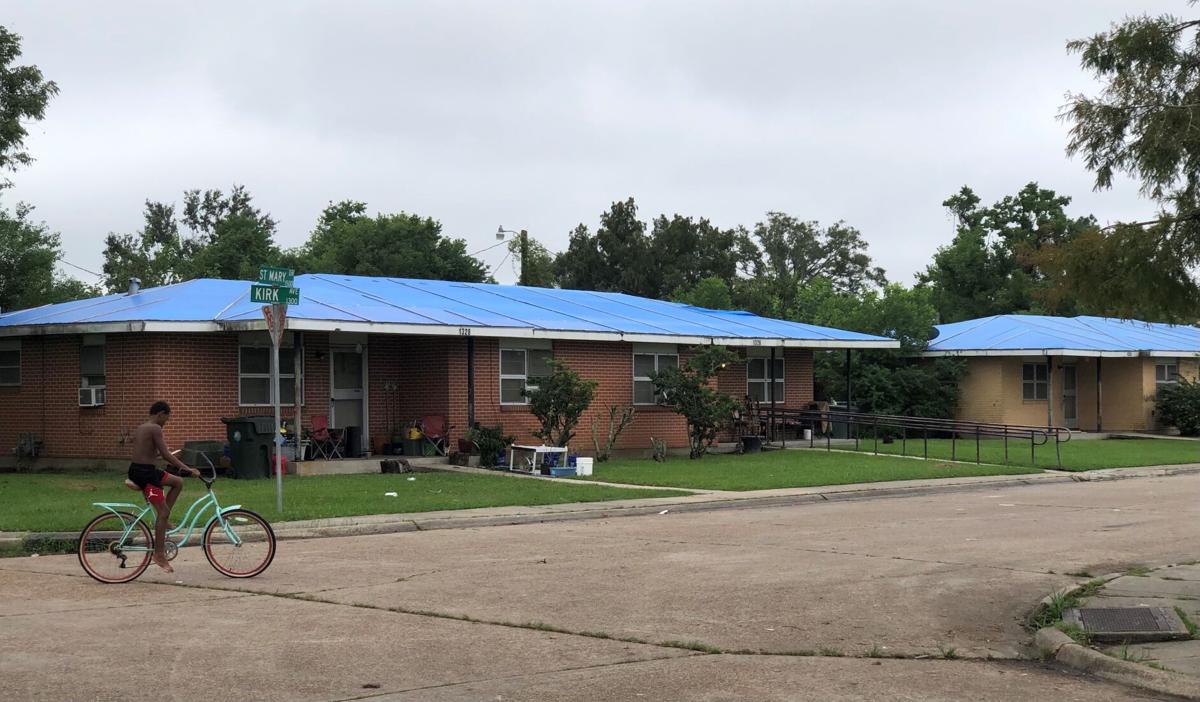 A boy rides his bike in the Jones Manor area of Lake Charles on September 16, 2021. 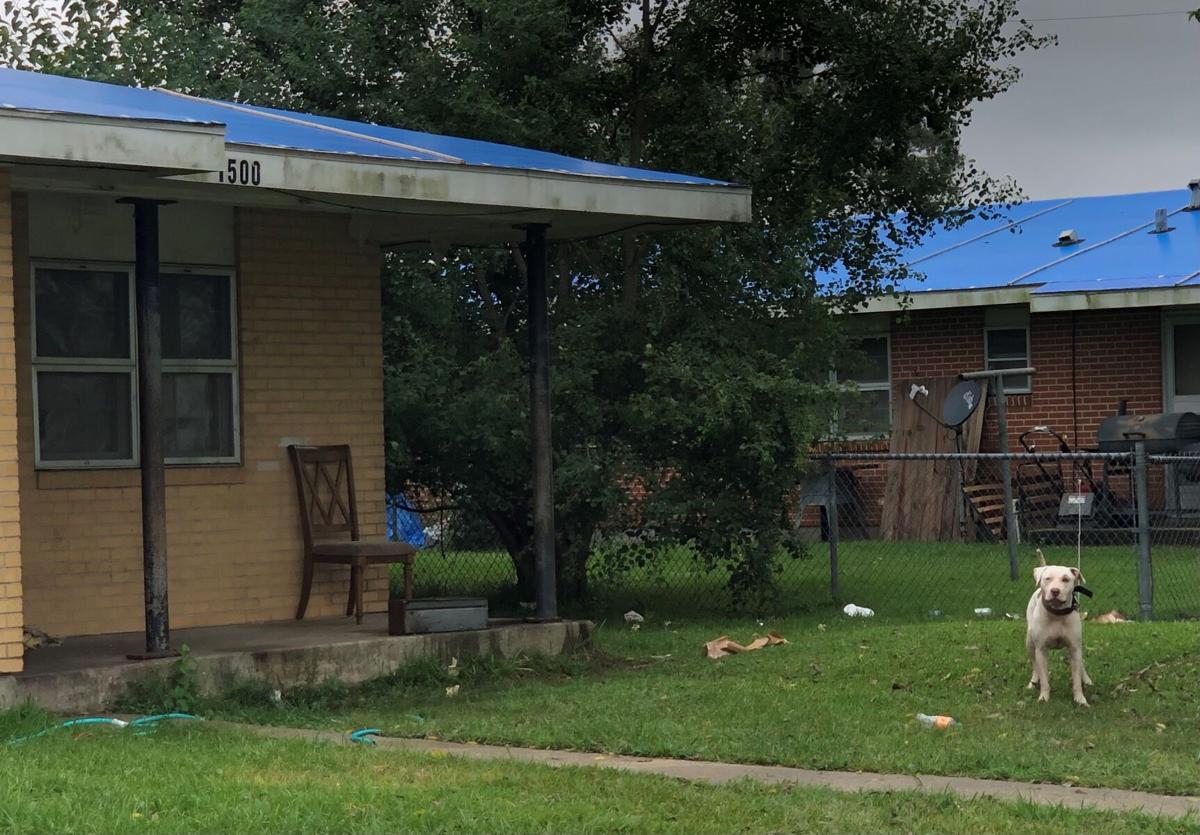 A dog barks outside of a home in the Jones Manor public housing complex in Lake Charles on September 16, 2021. 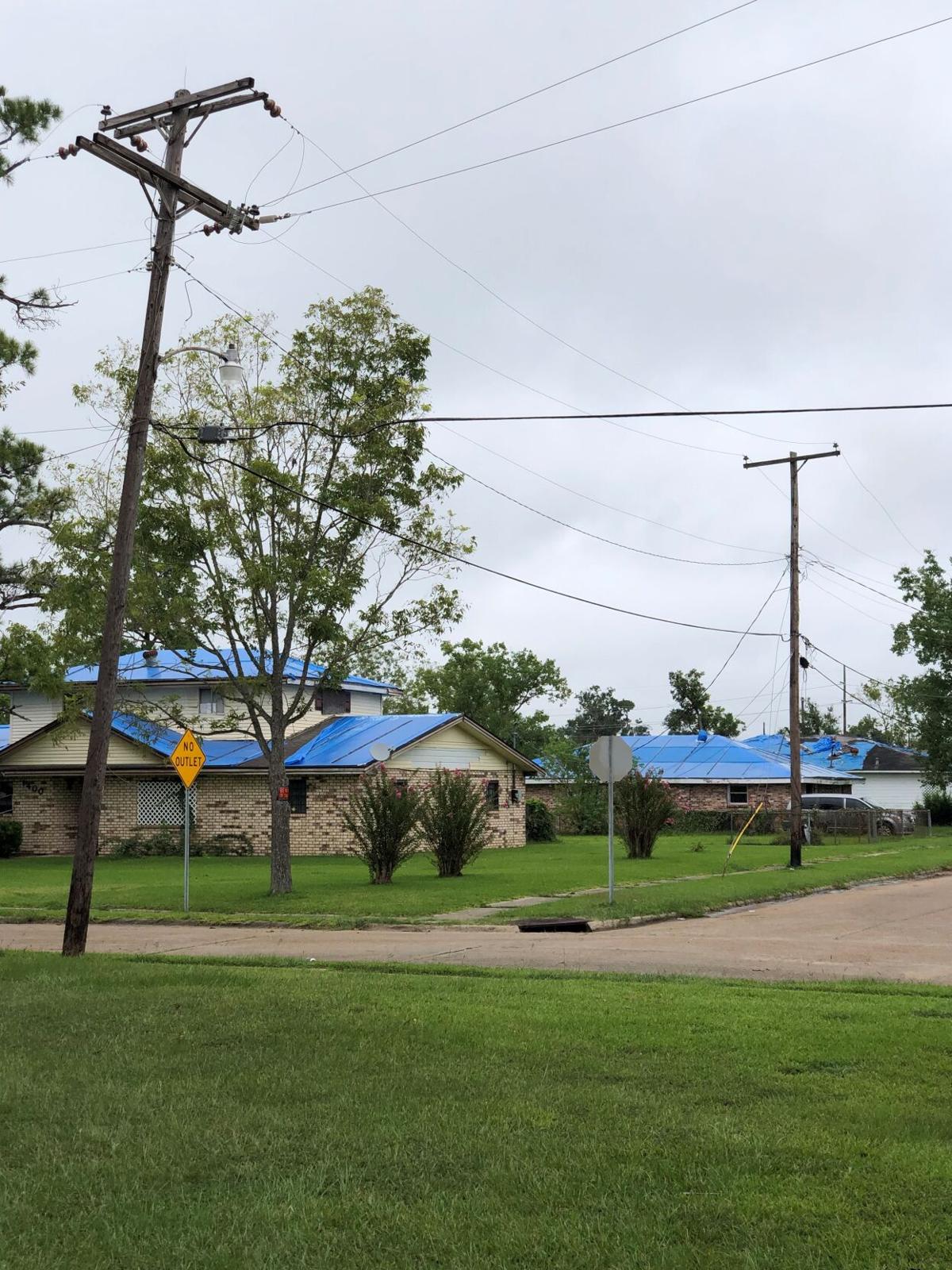 Homes in the Jones Manor area of Lake Charles, shown here on September 16, 2021, still have tarps on their roofs more than a year after Hurricane Laura. 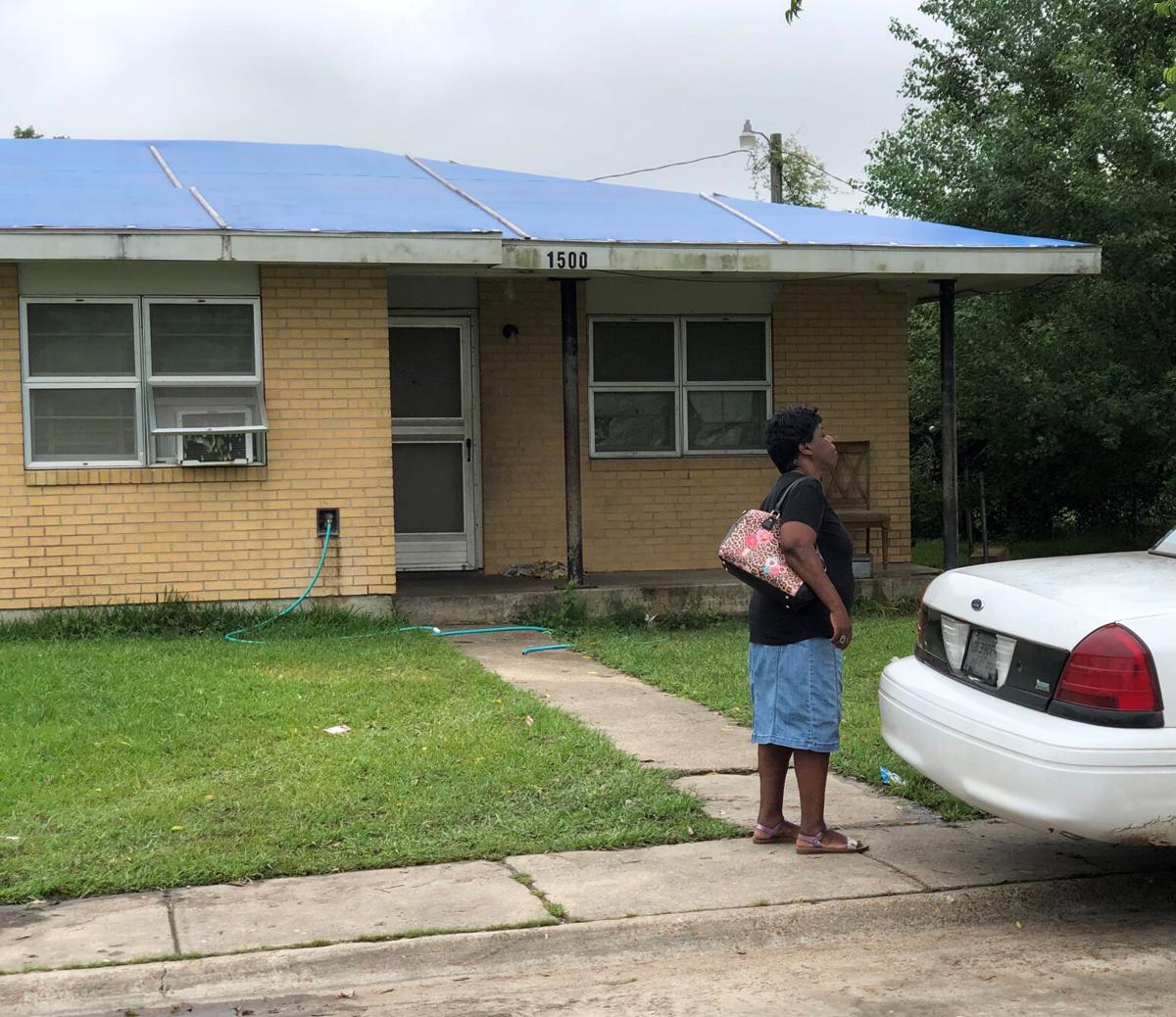 Mary Hagger visits her daughter in the Jones Manor area of Lake Charles on September 16, 2021. 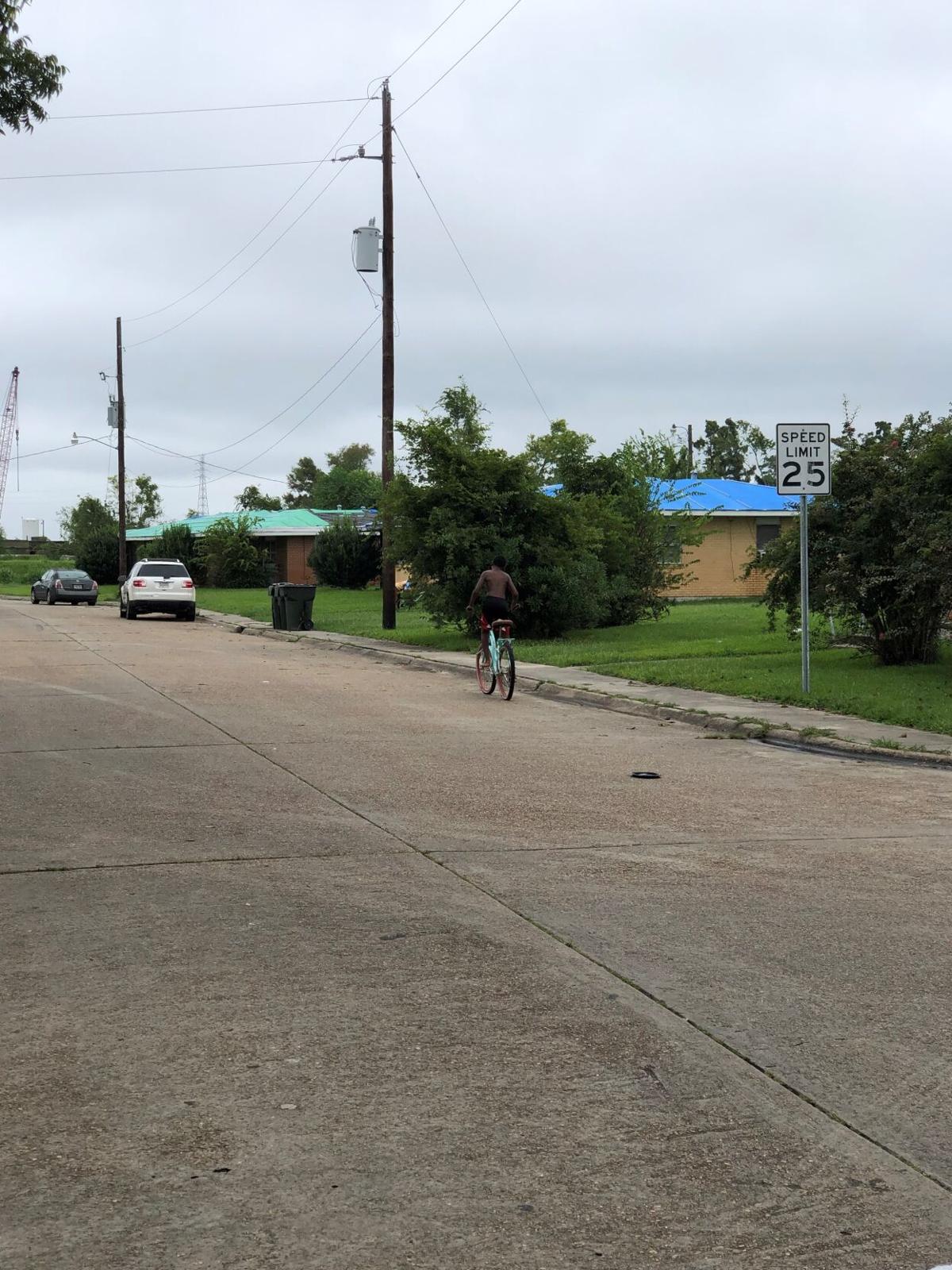 A boy rides his bicycle in the Jones Manor area of Lake Charles on September 16, 2021. Many homes in the neighborhood still have tarps on their roofs.

A boy rides his bike in the Jones Manor area of Lake Charles on September 16, 2021.

A dog barks outside of a home in the Jones Manor public housing complex in Lake Charles on September 16, 2021.

A boy rides his bicycle in the Jones Manor area of Lake Charles on September 16, 2021. Many homes in the neighborhood still have tarps on their roofs.

LAKE CHARLES — In a poor and working-class area in the northern part of this city, it can seem as though Hurricane Laura hit last month instead of more than a year ago.

Blue tarps still cover many roofs, and only about 15 of 68 public housing units in the neighborhood’s Jones Manor complex are livable. Some say they’ve just about given up on the government making improvements.

“If another storm comes through here, I’m not coming back,” said Mary Hagger, 63, who was visiting her daughter at a public housing unit but who owns a damaged house in a nearby neighborhood. “There isn’t going to be anything to come back to.”

More than a year after Laura, the Lake Charles area has finally been given some hope that federal disaster relief for long-term recovery needs could finally be on the way. One of the most powerful hurricanes in state history, Category 4 Laura was followed by another Category 2 hurricane six weeks later, an unusually severe winter storm in February and flooding in May. Meanwhile, the pandemic has increased the costs of rebuilding and added other obstacles.

But now comes perhaps the hard part: developing plans for how to effectively spend what is likely to be hundreds of millions of dollars, and in particular how to address an affordable housing shortage greatly exacerbated by the disasters.

In some ways, it may already be too late. The money has been so long in coming that an untold number of people still displaced may have already decided to abandon the city altogether.

Still, both local and state officials are relieved that they may be able to finally address some of the region’s long-term recovery needs if the money is approved by Congress in the weeks ahead. And they note Louisiana has the unfortunate distinction of having extensive experience in setting up and managing post-disaster programs.

Officials can draw on lessons learned from Road Home after Hurricanes Katrina and Rita in 2005, as well as the Restore program that followed the 2016 floods. The state has come up with a draft plan, though many steps remain before it can be implemented. Complications related to the distribution of federal relief will delay the delivery of any money for several more months even after Congress approves it.

When it does finally arrive, local and state officials say they will prioritize housing, a glaring need that must be addressed before any true recovery can take place.

“When you're talking about priorities and limited funds, it's going to be housing first,” said Pat Forbes, executive director of the state Office of Community Development, which will oversee a major share of the federal money.

Forbes, who has long experience in managing disaster recovery programs, will be charged with sorting through the byzantine federal laws, rules and regulations on how the money can be used. They can range from the nit-picky -- a 50-point checklist for environmental standards -- to the overarching -- a sweeping requirement that 70% of the money benefit low- to moderate-income families.

But first the rules have to be written, which, much to the chagrin of those managing recoveries, must be redone by the federal government with each disaster. It’s a complication U.S. Rep. Garret Graves, R-Baton Rouge, and others have been seeking to change.

The process is messy, and only step one has been completed, when President Joe Biden on Sept. 7 formally requested that Congress approve supplemental disaster relief for Laura and Delta.

His total request – not including needs related to Hurricane Ida -- amounted to more than $14 billion, though the category of money the Lake Charles area is most interested in includes just $2.3 billion.

Louisiana will not receive all of it, but a significant chunk is likely headed to the state – and most of that will be allocated to the southwest. The state has estimated that unmet needs for housing following Laura, Delta and Hurricane Zeta amount to around $1 billion, Forbes said, mostly in southwest Louisiana.

Illustrating the problem related to affordable housing, most households affected were renters, though it also appears a high percentage of homeowners impacted did not have insurance, he said.

Evidence in Lake Charles supports his point. Vast stretches of public housing and apartment complexes still sit empty, their occupants evicted for repairs and tarps covering roofs. Residents talk of bunking with relatives or friends when they cannot secure a trailer from FEMA.

The Lake Charles Housing Authority recently calculated that the city’s stock of public housing and Section 8 units was down by 40% due to storm damage to nearly 1,000 of them. Ben Taylor, the authority’s director, said it is continuing to seek money from insurers and FEMA.

Though he’s still living in a temporary trailer, Tony Guillory, a Calcasieu Parish police juror, was one of the lucky ones. He succeeded in his insurance fight after Laura lifted his former house off its piers and totaled it.

Construction of his new house in the same spot is now well underway, but his elderly neighbor’s home still sits in ruins after a tree fell through it. He said she lacked insurance and remains in Houston. The tarp covering her house, meanwhile, has come loose in spots, and vines are growing up the side of the house.

“I do think they need to come up with a program to help those people that didn’t have insurance,” said Guillory, standing near the trailer he still calls home.

The next step in receiving disaster aid would be for Congress to approve it, which could happen before the end of the month to coincide with the end of the federal fiscal year. Graves and others warn, however, that approval is not guaranteed given a brewing partisan fight over raising the debt limit in Congress.

If approved, the legislation will include details about how the money is to be distributed. After that, the U.S. Department of Housing and Urban Development will write further rules for how to spend the portion falling under the Community Development Block Grant program – which the Lake Charles area is seeking for long-term needs.

Once that is written, the state must adapt its plan to fit the rules, seek public comment and submit it to HUD for approval. As an example of how time-consuming the process can be, seven months passed between when Congress approved an appropriation for the 2016 floods and when the money was delivered, said Forbes.

Graves, a harsh critic of the block grant program, has been pushing legislation that would streamline the process by providing automatic funding for certain recovery programs soon after disasters. FEMA is authorized to act automatically, but that is for immediate needs, not longer-term recovery.

“This is a disaster. It's an emergency, and there's no time to sit around and draft plans and to have this arduous application process, to send all these inspectors by your homes,” Graves said. “You can either spend all this time and money trying to get it perfect or you can lean a little bit more towards getting the money out the door quickly.”

He also said he believes Louisiana must do more to be ready to move quickly after disasters, saying “we’ve been through these things so many times, we should have this process perfected.”

Craig Fugate, the FEMA administrator under Barack Obama who is now chief resilience officer for One Concern, a private company that works to mitigate damage from disasters, agrees the federal process for allocating such funds is “not a very nimble system.” He adds that communities invariably end up losing affordable housing in the process, causing lower-income families to be permanently displaced.

“We’re losing affordable housing at unsustainable rates with all of these storms,” he said.

He says the process should include assessments within a couple weeks after storms to determine what can be repaired or rebuilt and what can’t, allowing quick decisions to be made on how to bring residents back. He pointed to post-Katrina New Orleans, where huge, important demographic shifts occurred.

“To a certain degree if we don't figure this out, what we'll continue to see is we end up exporting our poor further and further away from their communities, and we’re losing a lot of the workforce in the service industries,” he said. “It’s going to be increasingly difficult if you don't have affordable housing to maintain a workforce just to provide basic community services.”

Lake Charles is contracting with two firms to help if and when supplemental federal money does arrive: Cornerstone Government Affairs, whose Paul Rainwater served as head of the Louisiana Recovery Authority post-Katrina and Rita among other roles, and SBP, formerly known as St. Bernard Project and which specializes in post-disaster housing solutions. Calcasieu Parish has also come up with a long-term recovery blueprint.

When a housing program does take shape, the state is likely to set up a survey to collect basic data, followed up by an application process and discussions with case managers. Grants could then be allocated to homeowners and possibly loans to landlords in exchange for the development of affordable housing units, said Forbes.

Unlike after Katrina, the state is not expected to be allowed to buy property from homeowners and redevelop it.

Instead, if the state does purchase property, it would likely be because homes should not exist there due to flood or other risks and the land would remain empty, said Forbes.

Other areas where the money is likely to be used include economic development and certain types of local government spending. But for local officials, housing is the priority.

“We do know that housing is the biggest need that has the largest gap in terms of funding,” said Alberto Galan, the assistant to the Calcasieu Parish administrator who oversaw development of its long-term recovery plan.