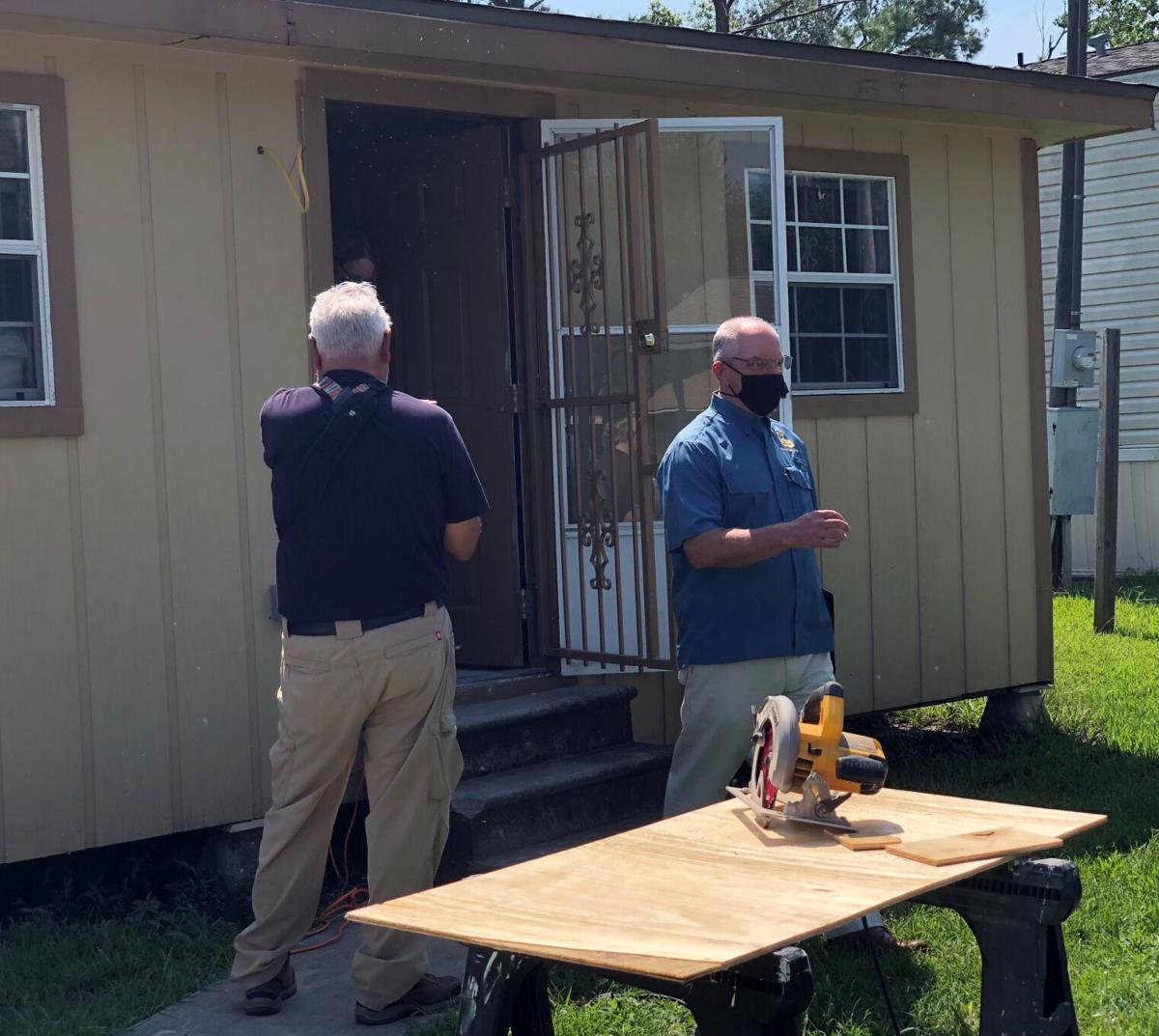 Gov. John Bel Edwards visits a home in Lake Charles being repaired with FEMA and charitable assistance. Edwards visited the area with FEMA administrator Deanne Criswell to mark a year since Hurricane Laura. 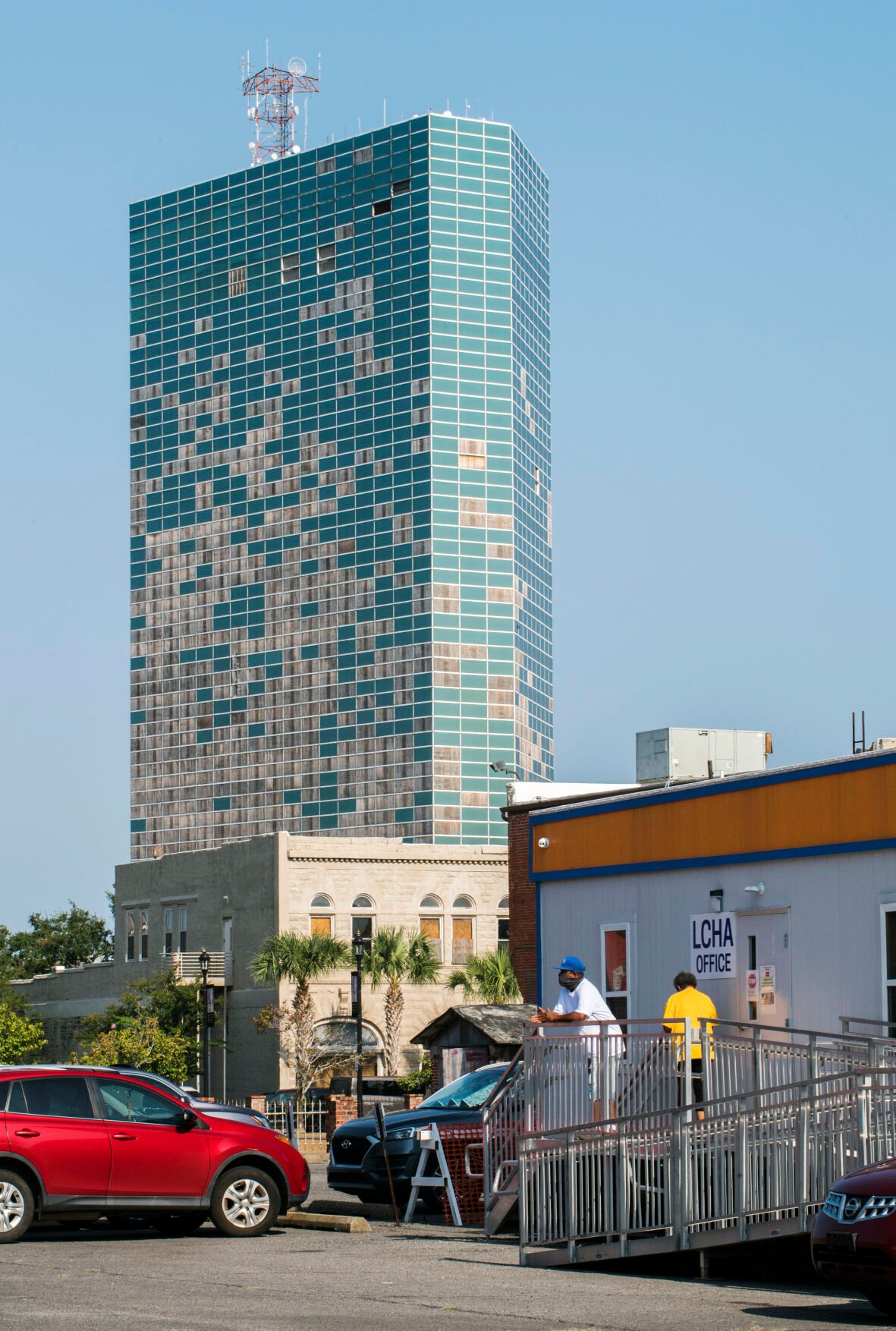 LAKE CHARLES – Gov. John Bel Edwards and FEMA administrator Deanne Criswell visited this battered city to mark a year since Hurricane Laura and view halting rebuilding efforts on Thursday, but the trip was overshadowed by warnings of the possibility of another storm striking in the days ahead.

Edwards did, however, provide an update on efforts to obtain disaster relief dollars for southwest Louisiana, indicating a deal could be reached in Washington to move forward on such legislation as soon as next month.

Current forecasts call for a tropical system in the Caribbean to develop into a hurricane and possibly hit Louisiana late Sunday or early Monday, with models showing it heading toward the Lafayette area. Any news of another hurricane moving toward the Louisiana coast causes especially deep concern in the Lake Charles area, which was devastated by Laura on Aug. 27, 2020, then slammed again by Hurricane Delta six weeks later.

Laura was one of the most powerful storms in state history, packing 150 mph winds. Thousands remain displaced in the region and rebuilding has sputtered in the absence of supplemental federal disaster relief dollars. Roughly 2,000 households still live in FEMA-supplied travel trailers and mobile homes.

Both Edwards and Criswell spoke of the recovery, but also issued warnings about the approaching storm, now known as Tropical Depression Nine. Edwards called on residents “to be prepared all across coastal Louisiana.”

“It is time to prepare now,” Edwards said at a press conference. “Because what you're going to see and we've seen it before -- in fact, we saw it for Laura -- in all likelihood, is rapid intensification.”

Regarding Laura, Criswell spoke of the storm’s power as the strongest hurricane to make landfall in Louisiana since 1856. She also listed FEMA’s assistance throughout the past year. Federal assistance in various forms has totaled more than $1 billion for immediate needs.

“Close to 24 million cubic yards of debris have been removed from the community,” she said. “Just to put this into context a little bit, this is enough to roughly fill the Superdome in New Orleans six times. And this is not only an indication of the scale of the damage that southwest Louisiana experienced, but it's also an indication of the scale of the recovery that's going to continue.”

But while local officials praised FEMA for its initial response, Lake Charles Mayor Nic Hunter spoke with frustration over the lack of supplemental relief money, a common form of assistance after catastrophes that requires federal legislation. The region wants to use the money to establish a program to help those displaced rebuild their homes.

Hunter noted that beyond Laura and Delta, the region was also hit by a fierce winter storm in February and flooding in May, all during a pandemic that brought new complications and drove up costs. He called the lack of supplemental relief under those circumstances “glaring, unacceptable, embarrassing,” and spoke of other regions receiving such assistance in a far shorter time period.

“What do we have here in southwest Louisiana 365 days after having gone through four federally declared natural disasters?” he said. “We have zero.”

SULPHUR - There have been times over the last year when Barbara Reed felt like it was just too much.

Edwards has spelled out $3 billion in unmet needs following Laura, Delta and Hurricane Zeta, which hit southeast Louisiana in October. He says he would expect the state to receive about half of that in a federal appropriation, most of which would go to southwest Louisiana.

In late June, he said he was optimistic legislation would take shape in the next several weeks to a couple months, but it remains unclear how or if the relief will be approved. Edwards said Thursday he has had discussions on the issue with Democratic House Speaker Nancy Pelosi and U.S. Sen. Bill Cassidy, a Louisiana Republican has shown a willingness to negotiate with the White House with the recent bipartisan infrastructure bill.

Edwards said he also spoke to U.S. Rep. Julia Letlow, R-Start, on Wednesday and, though she represents a separate Louisiana district, she asked how she could help with the issue. Notably, Edwards did not mention U.S. Rep. Clay Higgins, the fervent Donald Trump supporter who represents southwest Louisiana and declined to attend President Joe Biden’s visit to Lake Charles in May.

“The indications that I get are that there will be an agreement in an appropriations instrument that should come out in the September timeframe that would have CDBG disaster recovery funding in it,” Edwards said, referring to the category of relief the region is seeking.