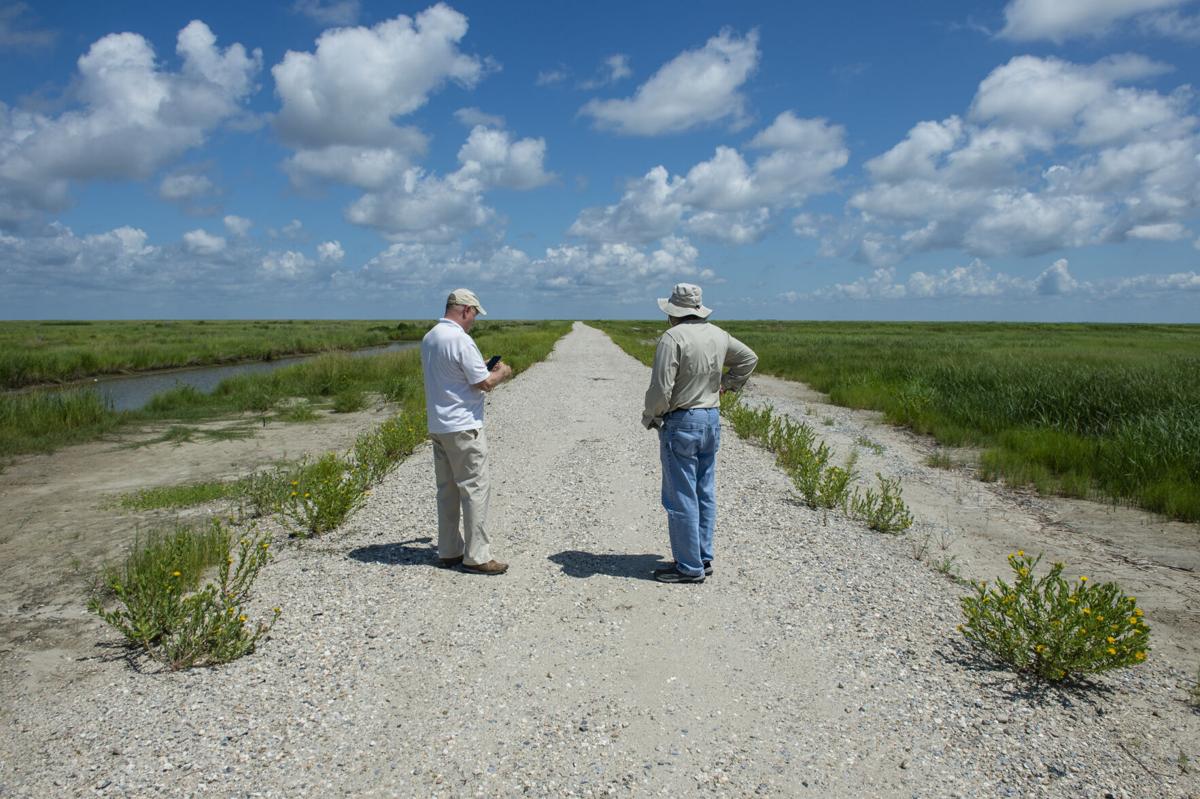 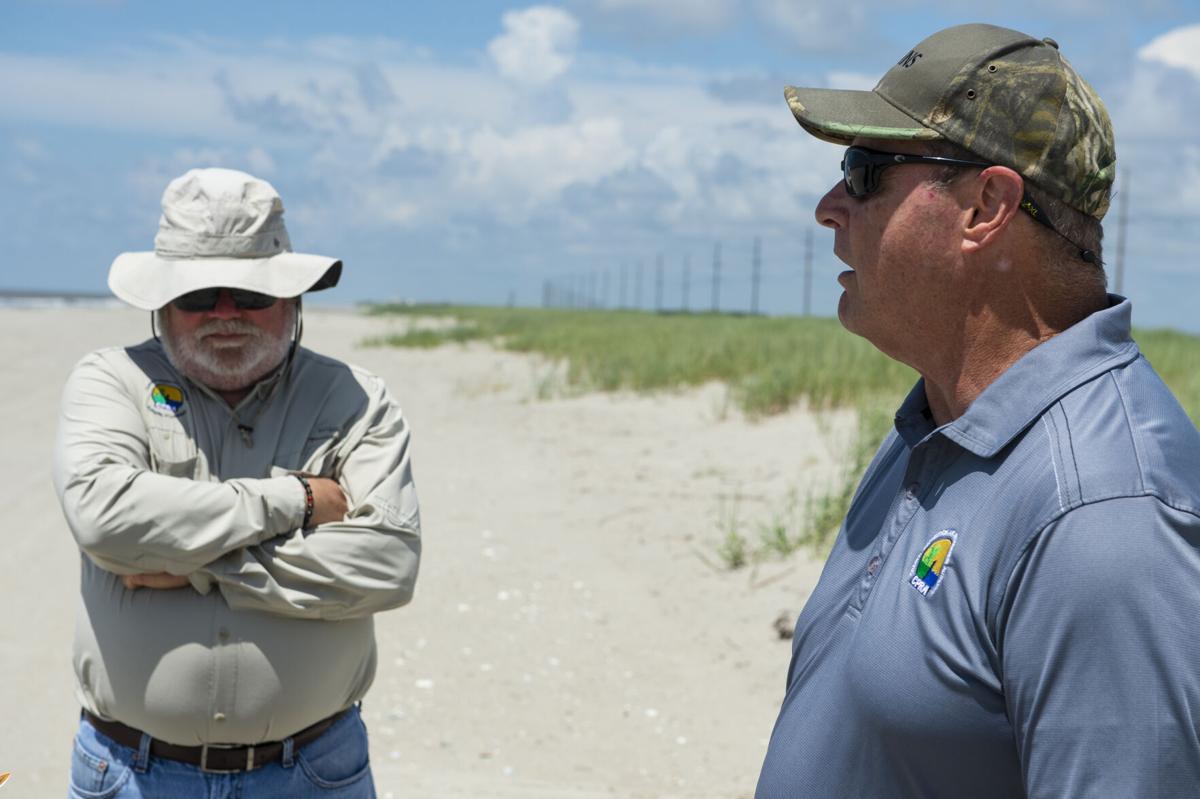 Stanley Aucoin, left, and Jerry Carroll visit the site of a complete shoreline project on Tuesday, August 10, 2021, in Cameron Parish. 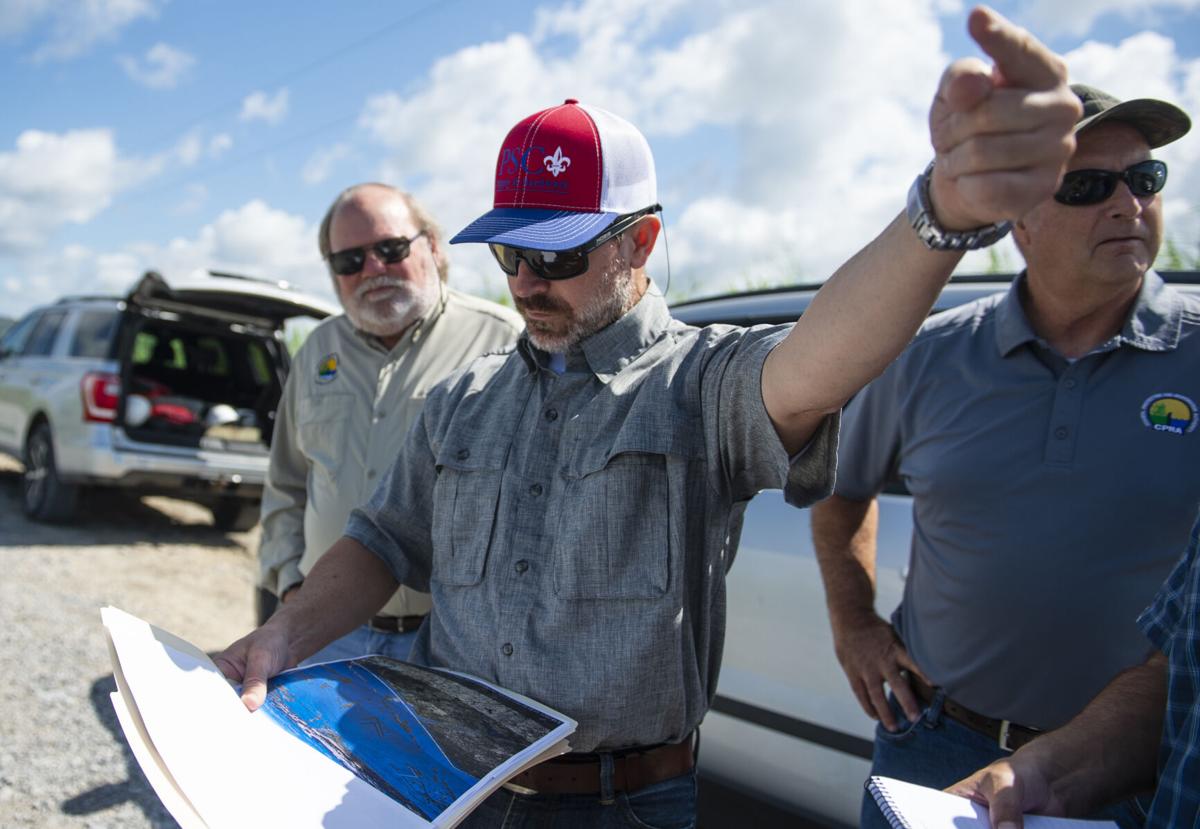 Dion Broussard, center, with Stanley Aucoin, left, and Jerry Carroll, looks at an aerial map of the Cameron-Meadows marsh Creation and Terracing project on Tuesday, August 10, 2021, in Cameron Parish. 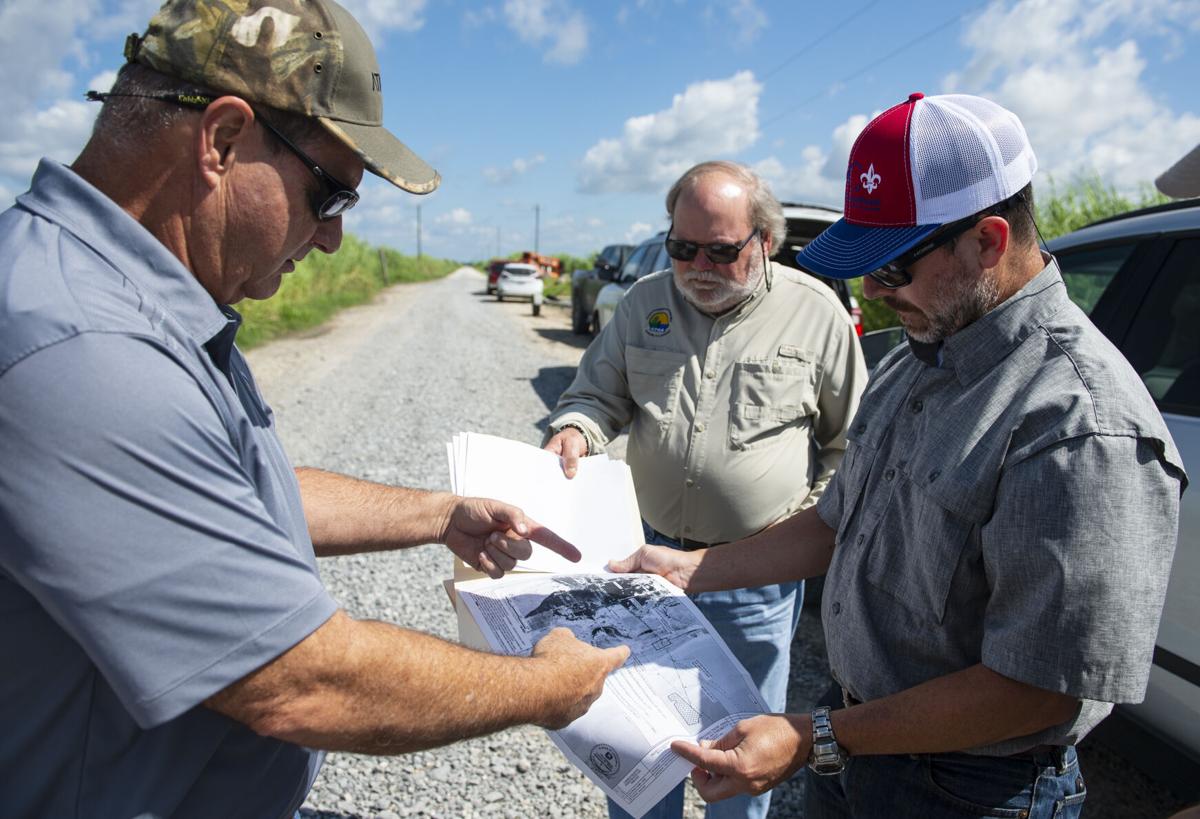 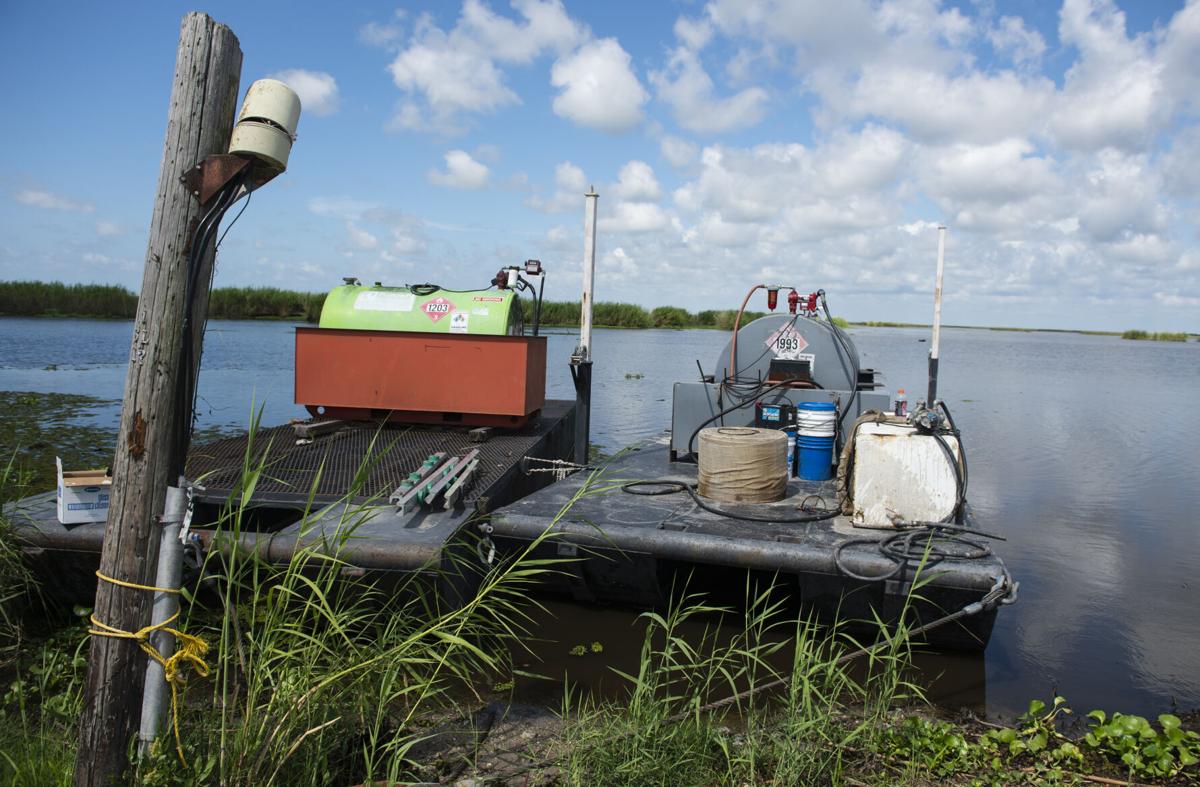 Marsh buggies carrying drums of fuel are seen at the Cameron-Meadows Tuesday, August 10, 2021, in Cameron Parish. 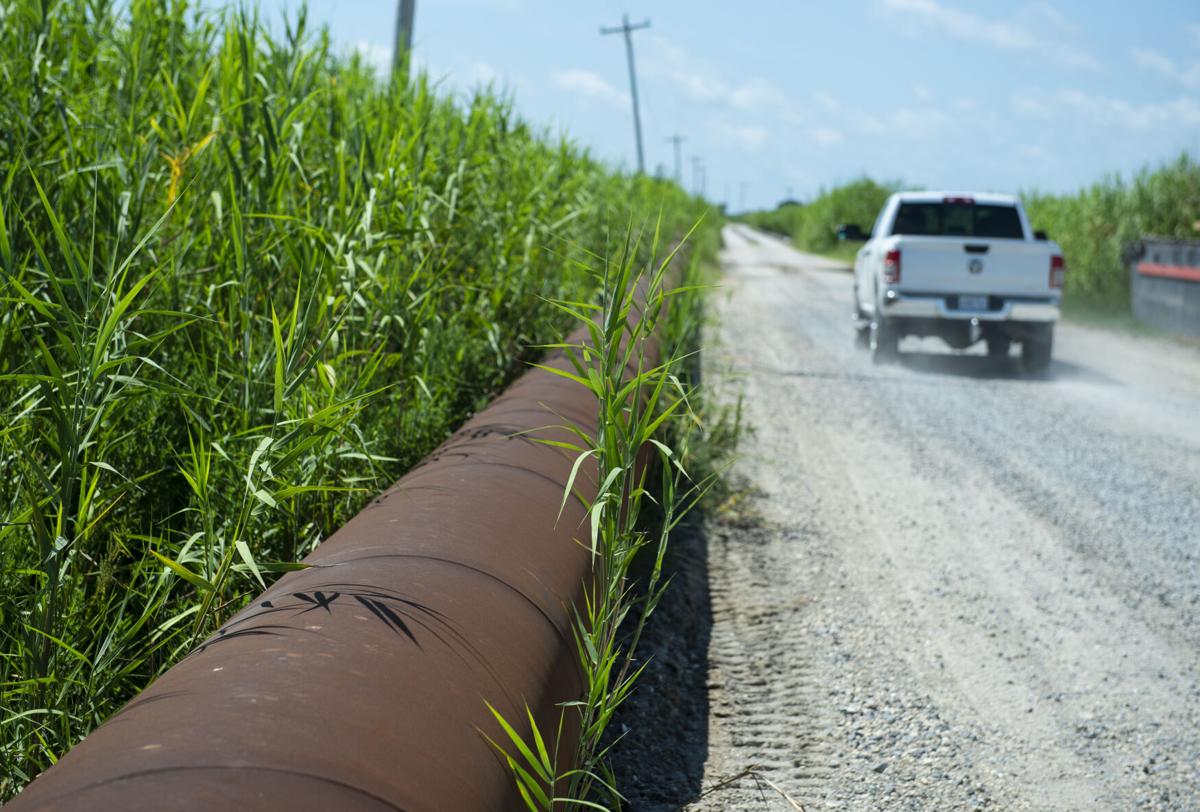 The pipeline that will be used to carry material from the gulf to the Cameron-Meadows Marsh Creation and Terracing Project can be seen on Tuesday, August 10, 2021, in Cameron Parish. 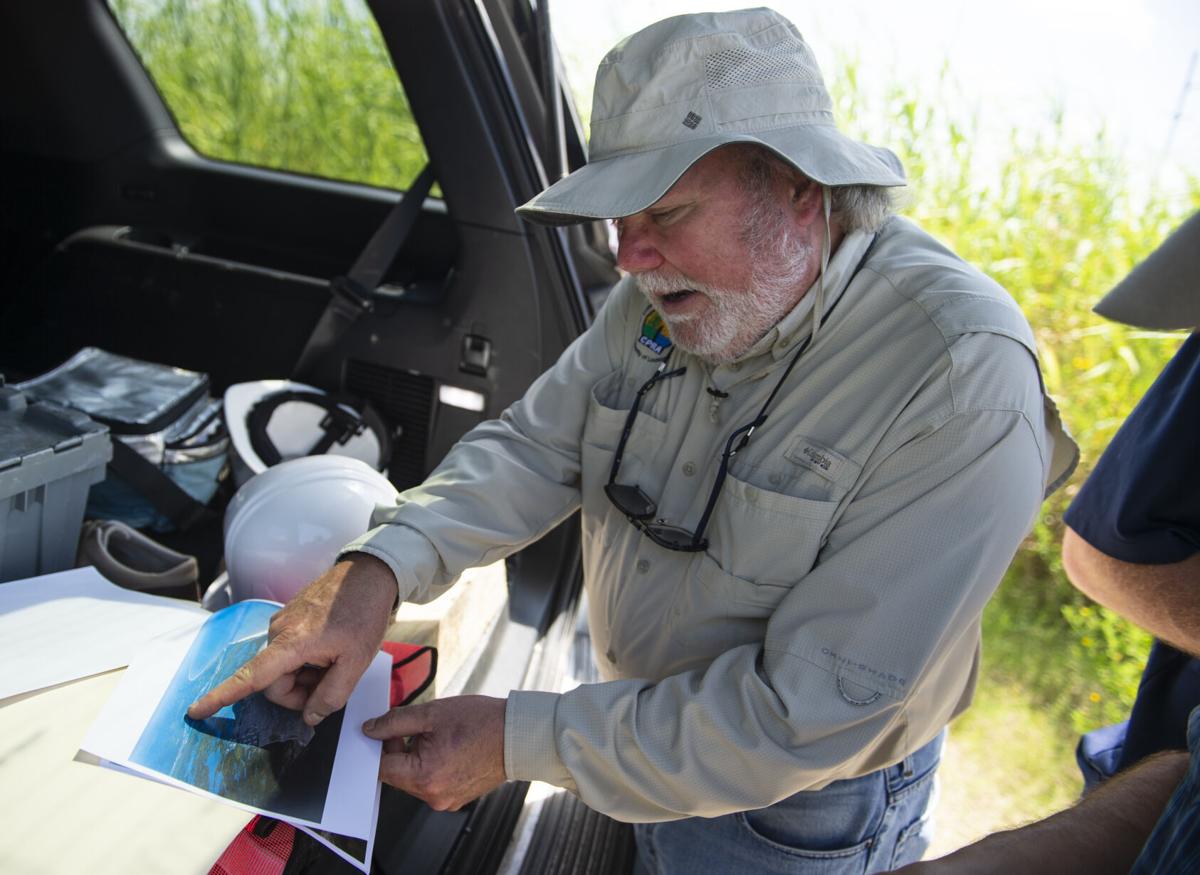 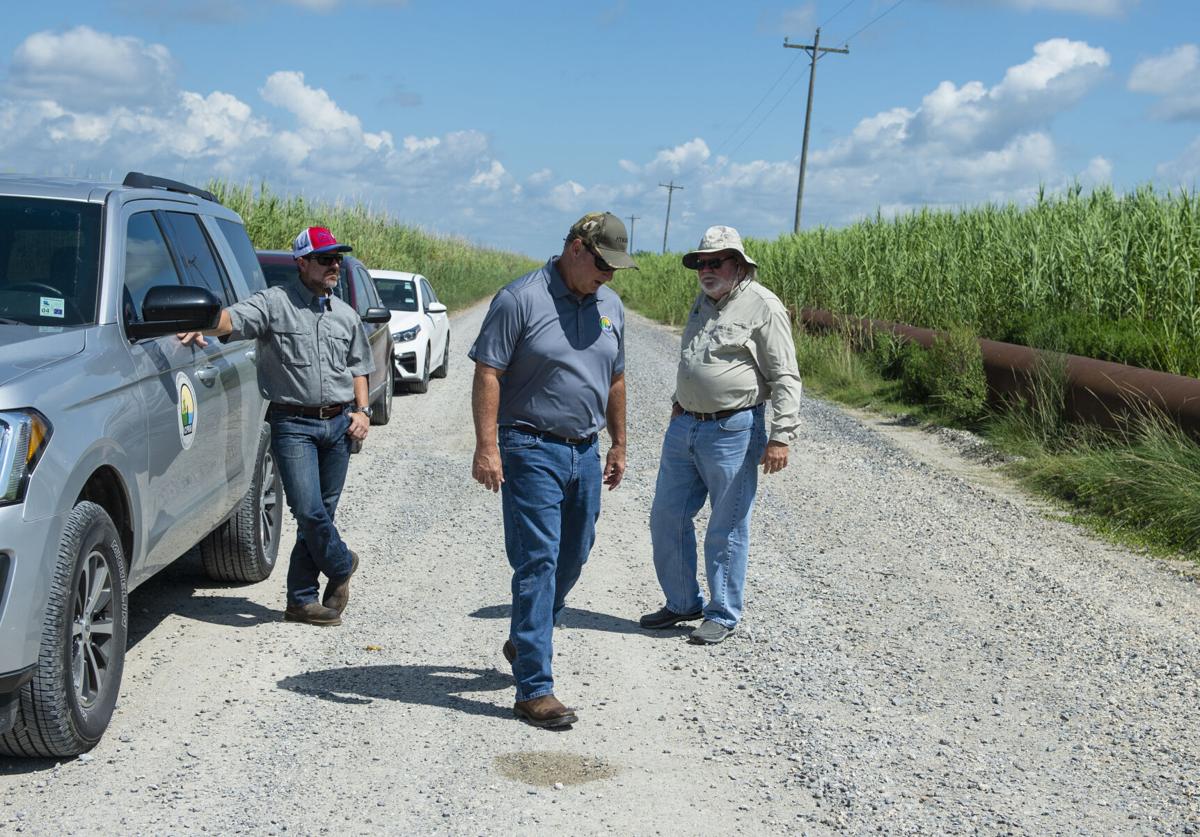 Dion Broussard, from left, Jerry Carroll, and Stanley Aucoin, visit the site of the Cameron-Meadows Marsh Creation and Terracing Project on Tuesday, August 10, 2021, in Cameron Parish. 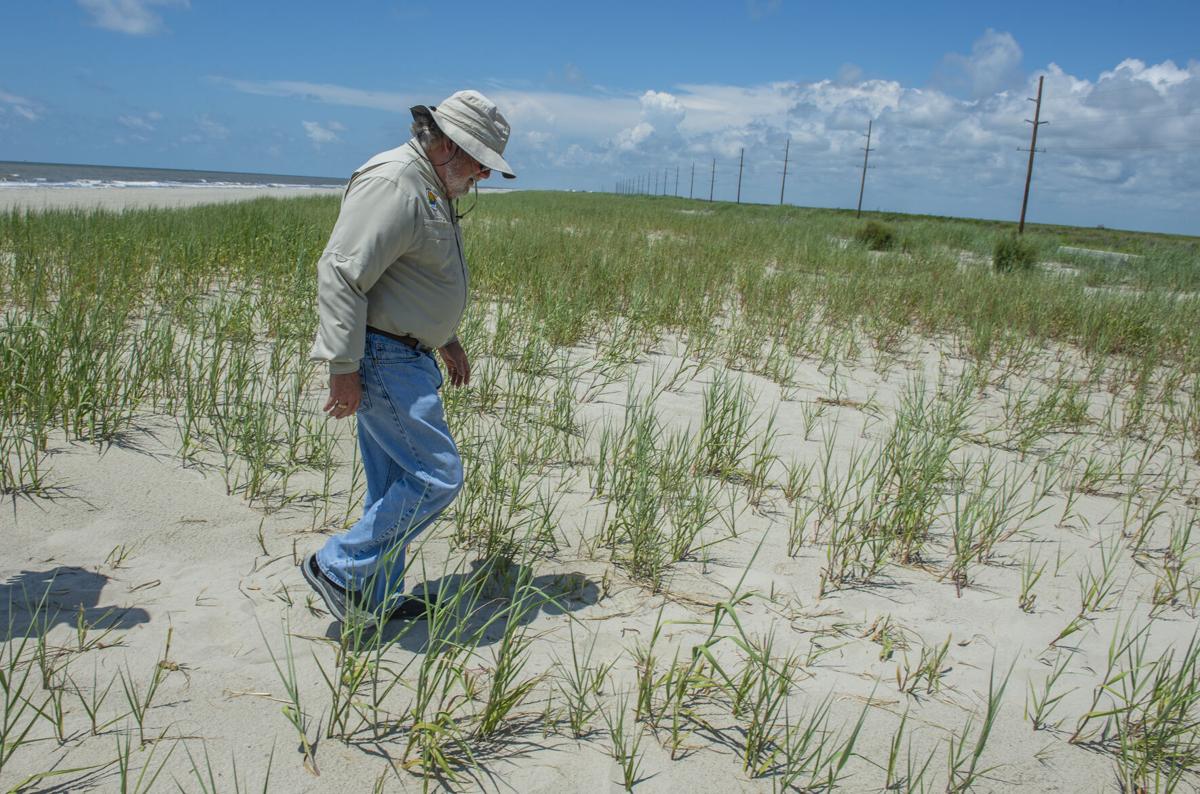 Stanley Aucoin visits the site of a completed shoreline project on Tuesday, August 10, 2021, in Cameron Parish. 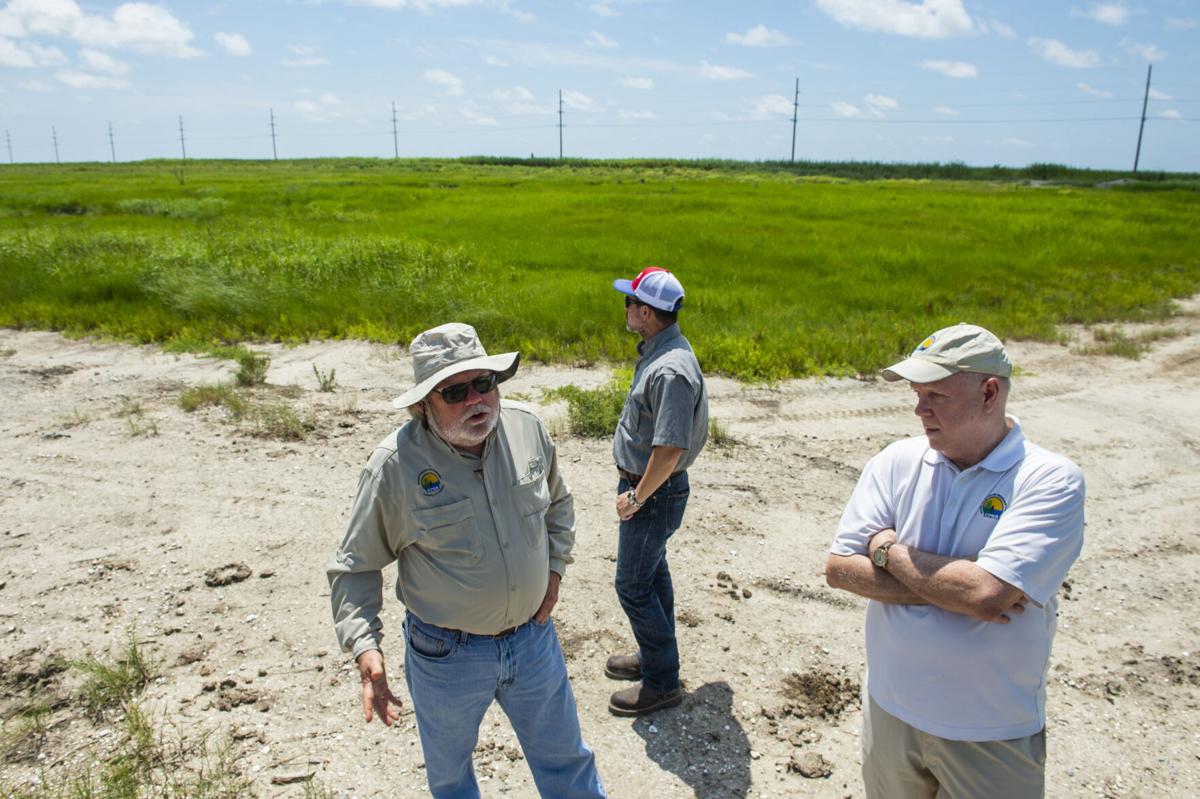 Stanley Aucoin, left, and Jerry Carroll visit the site of a complete shoreline project on Tuesday, August 10, 2021, in Cameron Parish.

Dion Broussard, center, with Stanley Aucoin, left, and Jerry Carroll, looks at an aerial map of the Cameron-Meadows marsh Creation and Terracing project on Tuesday, August 10, 2021, in Cameron Parish.

Dion Broussard, from left, Jerry Carroll, and Stanley Aucoin, visit the site of the Cameron-Meadows Marsh Creation and Terracing Project on Tuesday, August 10, 2021, in Cameron Parish.

Stanley Aucoin visits the site of a completed shoreline project on Tuesday, August 10, 2021, in Cameron Parish.

HOLLY BEACH — It’s in some ways like walking into the past. A stroll along the dirt and gravel road between marsh and grass-lined ponds, the sound of the Gulf’s waves in the distance, seagulls overhead, turns back the clock decades, before the land disappeared.

“This was all a big, open expanse of water,” Jerry Carroll of the state’s Coastal Protection and Restoration Authority said on a visit to Oyster Bayou, across the road from the Gulf of Mexico and a short drive away from Holly Beach, the “Cajun Riviera” where many elevated camps have been destroyed by this century’s brutal storms.

This sliver of remote Cameron Parish is walkable again because of a massive state project that pumped in enough sediment to restore marshland covering an area the size of more than 60 Superdomes. The project, completed in 2019, appears to have been successful. It held up well in the twin hurricanes that devastated the region last year, but even Carroll admits that it’s only “buying time.”

The restoration of the Oyster Bayou marsh is part of a series of projects by the state in its fight to keep this vulnerable part of Louisiana from vanishing. The effects of climate change, particularly rising sea levels, and decades of other man-made factors may mean it’s an unwinnable fight over the long-term.

Still, state officials and those who call Louisiana’s most sparsely populated parish home say they have no choice but to wage it — even if some experts question whether it’s time to retreat instead.

“We are at the tip of the spear in several ways,” said Cameron Port Director Clair Hebert Marceaux, pointing out the parish’s energy production and its role as a de facto barrier island providing storm protection for points further north such as Lake Charles, Louisiana’s fifth-largest city. “As a person who lives here and works here, I absolutely think we need to protect and preserve and rebuild as much as we possibly can.”

It is no secret that Louisiana’s coast is disappearing, and the state’s efforts to save it stretch from the bird’s-foot delta at the mouth of the Mississippi River to Sabine Pass along the Texas border. But Cameron holds a unique place for reasons that include its dwindling population and the lack of longer-term options, such as sediment diversions, which have proven effective in other areas by mimicking what were once natural processes.

Its plight has received additional attention due to the destruction caused last August by Hurricane Laura, which wiped out much of the lower part of the parish with its 17-foot storm surge and 150 mph winds. If there was any good news following the Category 4 storm, one of the most powerful in Louisiana history, it was that the state’s recently completed shoreline and marsh restoration projects here held up relatively well.

Some, however, question whether such projects will continue to be worth the tens of millions they typically cost, especially if doomsday climate change predictions come true, and if that money should be spent on relocating residents instead.

Torbjorn Tornqvist, a Tulane geology professor who specializes in coastal issues, said Cameron Parish risks effectively disappearing by the end of the century if climate-related sea rises are as dramatic as projected.

“Instead of spending it on these restoration projects, what if you would spend it on providing really appealing incentives to people who live in Cameron Parish to retreat land-ward to higher ground?” he said. “I think that's where we need to go. My worry is that by the time that is the only remaining option, there won't be any money left and the people are just going to be stuck there and left on their own with no resources to help them retreat.”

‘Other things at play’

It’s a highly sensitive assertion for those who live in Cameron and have family ties there extending back generations — even if the parish’s communities of commercial fishermen and offshore oil workers have become smaller, a trend made clear in recently released census data. The steep decline has come despite the construction of huge liquefied natural gas plants in Cameron that have brought in a small army of temporary laborers.

The census showed that in April 2020 — prior to Hurricane Laura — 5,617 people lived in the parish, down 18% from 2010 and 44% from the turn of the century. Hurricane Rita in 2005 set the current population decline in motion, and the costs of rebuilding in line with elevation codes have been a major obstacle in residents’ decisions on whether to return, in addition to their weariness with repeated catastrophes.

But parish officials point out that Cameron is far from the only coastal community facing such challenges. Marceaux, who has also been part of a CPRA community engagement group, favors ways to make it cost-effective for residents to return, and advocates potential alternatives to abandonment, such as building structures like grocery stores aboard barges that can be moved when storms approach.

The land loss is striking, however. The chenier plain and marsh that make up much of southwestern Louisiana’s coastline are no longer replenished with sediment the way they were when this part of the continent was being built over thousands of years. Man-made measures to prevent catastrophic flooding or boost economic activity have all played roles, from the Mississippi River levees to the extension of jetties for the Calcasieu Ship Channel.

The Calcasieu-Sabine Basin, which covers the state’s southwestern corner, has lost 122,000 acres of land since 1932, according to federal data — more than a quarter of the marsh that existed then. Parts of the shoreline have eroded at a rate of between five and 30 feet per year, the state says.

It also has low sediment accretion levels, making it particularly vulnerable to rising seas, said Tornqvist. On top of that, there is no major source of sediment to divert to the area, as is being envisioned with the Mississippi River and the huge Mid-Barataria Sediment Diversion project in southeastern Louisiana.

Matt Hiatt, an assistant professor at LSU’s department of oceanography and coastal sciences, said despite the challenges, the Cameron projects were sustaining the barrier island effect the parish provides to Lake Charles and other areas.

“It's not only the benefit of reducing wetlands loss,” he said. “There are other things at play like protecting the city, protecting the landscape from adverse effects from extreme events.”

A recent visit to three projects in Cameron underscores the massive effort required.

At the Oyster Bayou site, more than 800 acres of marsh were created or nourished. It was done with almost 4.2 million cubic yards of sediment dredged from the Gulf and piped in, according to the CPRA’s Stanley Aucoin. About 9,000 feet of earthen terraces were built as well to reduce wave and wake erosion.

Construction took about two years, at a total cost of around $34 million.

Just across La. 27 and La. 82, where not long ago the Gulf lapped near the road, a five-mile stretch of beach and sand dunes now keeps the water roughly 250 feet further out than before. That project, completed in 2014, required nearly 2 million cubic yards of fill at a cost of around $41 million. The road’s role as a hurricane evacuation route added to the importance of the project.

Nearby in an area known as Cameron Meadows, a project has begun to convert open water back into the marsh it once was. Factors including gas extraction, saltwater intrusion and hurricane damage have helped cause the loss of the marsh, state officials say.

The project will aim to create some 380 acres of marsh, while more than 12,000 feet of earthen terraces will also be built, said the CPRA’s Dion Broussard. Some $38 million has been approved.

Standing next to the project site, Carroll explained that “there’s no inflow of sediment, so with the natural forces of nature, of subsidence and sea level rise, it has no way to keep up.”

“By introducing sediment, we're creating land, giving it an opportunity to grow. Vegetation season will come, the plants will grow, they’ll die back, so essentially you're creating the biomass that hopefully will keep up with the subsidence.”

For Marceaux, it’s about more than science and industry, though the parish’s LNG production and export worldwide, along with the multibillion-dollar projects linked to it, help her make the case. She takes it personally, as do many others choosing to stick it out in a part of Louisiana fighting the tides, literally and figuratively.

“It's about the cultural tapestry that's here,” she said. “For me, it's not just about the patchwork of coastal restoration and protection projects. It's about a way of life. So if we want to keep living here, we have to keep doing these kinds of projects.”