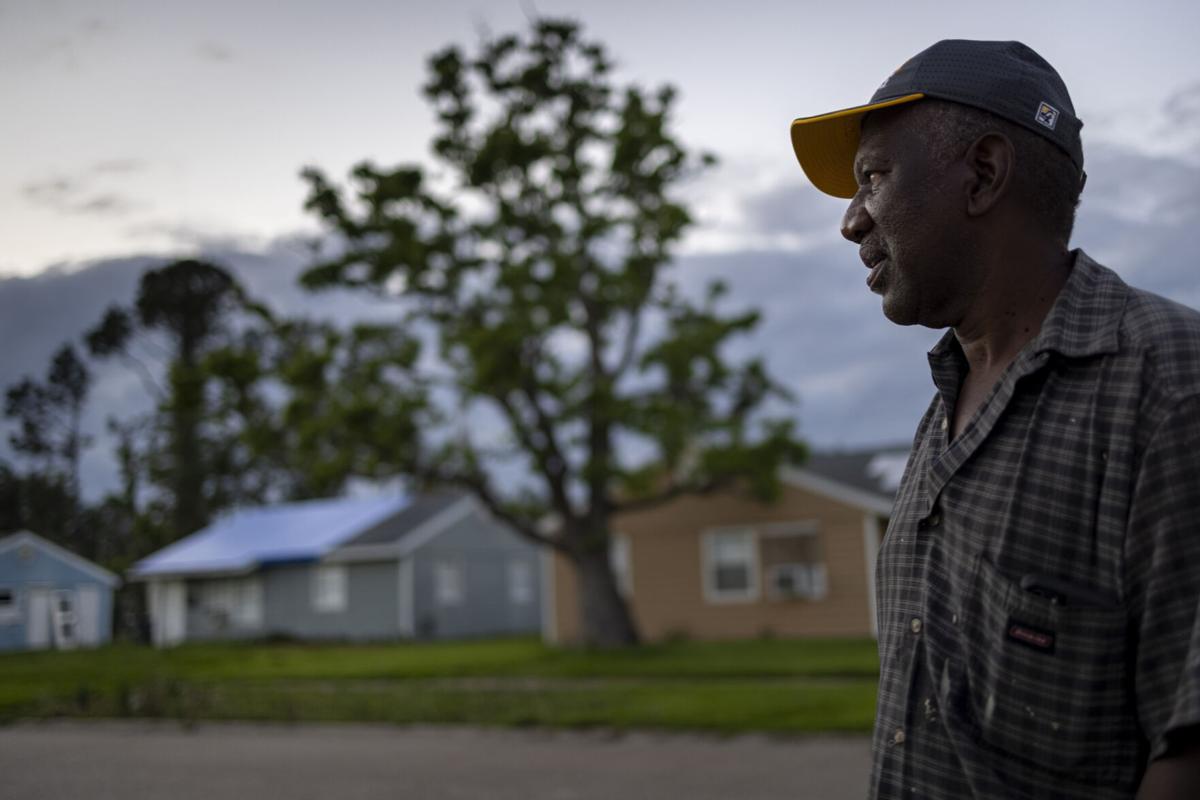 Kenneth Hanchett, 62, pauses to look around his neighborhood near 5th Street in Lake Charles as he mows the grass in front of his house and at an abandoned house next door to him on May 13. The city continues the long process of rebuilding after Hurricane Laura as another hurricane season gets under way. 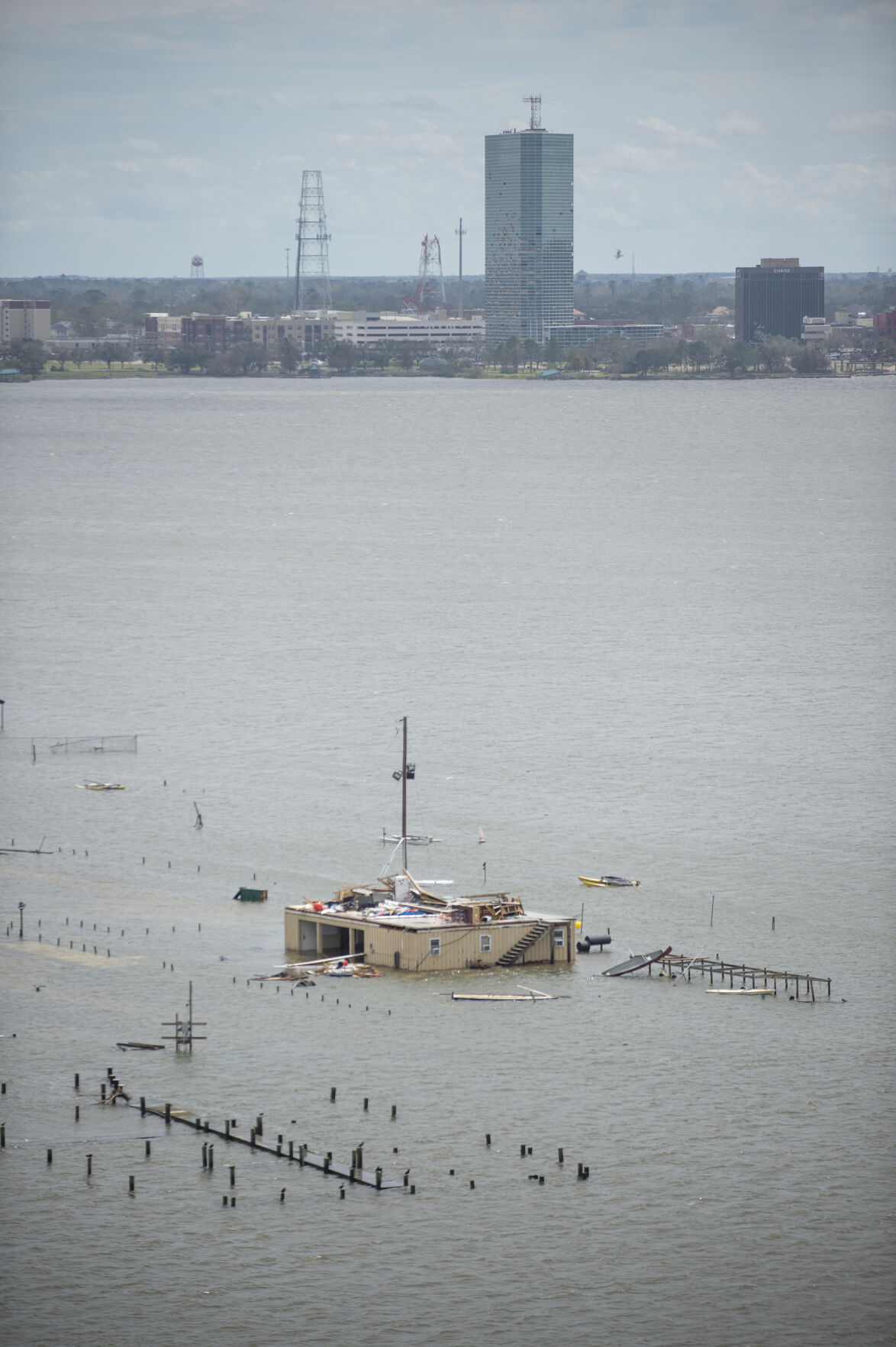 LAKE CHARLES – Gov. John Bel Edwards said Wednesday he was optimistic legislation that could provide hundreds of millions of dollars in federal disaster relief to southwest Louisiana would take shape in the weeks ahead, the clearest indication yet that help may finally be on the way for the region more than 10 months after Hurricane Laura barreled through.

Edwards, speaking to The Advocate | The Times-Picayune after breaking ground on a project in Lake Charles, said he spoke with House Speaker Nancy Pelosi on Tuesday to again press for the legislation. He said he’s also had recent conversations with White House officials. The governor has previously spelled out some $3 billion in unmet needs statewide following last year’s trio of hurricanes -- Laura, Delta and Zeta -- but said that he would only expect to receive around half of that figure from the federal government.

Most of the aid would likely go to southwest Louisiana, which is struggling to recover from the devastation left by Laura, the most powerful storm to make landfall in the state since 1856, and Category 2 Hurricane Delta, which followed a similar path around six weeks later. Zeta, a Category 3 storm, hit southeast Louisiana in late October.

“We are disappointed because we wanted the money sooner,” Edwards said. “But if you look back in recent history, it has taken this long in the past. But it just shouldn’t have to … And of course, if it’s frustrating for me, I can only imagine how frustrating it is for people who live in southwest Louisiana, who really need that assistance, and for the local elected officials who are trying to drive the recovery.”

Asked what kind of timeframe he envisioned, he said: “I'm thinking in the next several weeks to a couple months, we're going to see this appropriation take shape.”

Edwards cited the change in presidential administrations as well as the huge list of priorities in Washington as contributors to the delay in having the money approved. He and local officials had the opportunity to make their case in person to President Biden in May, when he visited Lake Charles, though that trip was mainly focused on the president’s infrastructure plan.

LAKE CHARLES – Approaching from the west on Interstate 10, the lake that gave this city its name stretches out into the horizon – followed by …

While FEMA and the U.S. Small Business Administration have provided more than $1 billion in immediate assistance, southwest Louisiana officials say they will not be able to rebuild without supplemental federal aid, which is common after major disasters. A particular concern is housing. Local officials are hoping to establish a program, similar to the Road Home after Hurricane Katrina, that would help close the gap between insurance payments and what is truly needed to rebuild.

In Lake Charles alone, city officials estimate between 3,000 and 5,000 people remain displaced, a number that includes those forced from their homes by severe flooding in May, which added further misery to the region. Some who had just finished repairing their homes from the hurricanes were forced to gut them again.

The region has experienced a stunning run of disasters over the last 10 months. A fierce winter storm in February also caused damage, much of it due to bursting pipes, while complications such as supply shortages and price increases related to the pandemic have slowed rebuilding efforts.

Laura is estimated to have caused $19 billion in damage in the United States -- $17.5 billion of it in Louisiana. State Insurance Commissioner Jim Donelon says it will end up as the state’s second-costliest disaster ever after Katrina.

But while Edwards is hopeful money is on the way, much work remains to be done in Washington at a time of partisan rancor and populist posturing. Louisiana’s congressional delegation will have to figure out the best method of having the money approved, which could mean attaching it to a larger bill that is likely to pass. There is also the possibility aid could be approved piecemeal rather than all at once, though local officials would prefer otherwise.

Edwards was in Lake Charles for two groundbreaking ceremonies Wednesday for projects the region hopes can help mark a post-hurricane turnaround. They include a $20 million plan to build a children’s museum and science and nature center on the Lake Charles waterfront, and the reconstruction of the BioLab chlorine plant just across the Calcasieu River in Westlake.

The plant was destroyed by fire during Laura, provoking a shelter-in-place warning. It was such a major player in the industry that its destruction contributed to a nationwide shortage of chlorine tablets for swimming pools.

The plant will cost $170 million, more than initially estimated, and will create 82 jobs in addition to 19 existing ones. It is being granted hefty tax breaks under the state’s Industrial Tax Exemption Program.

LAKE CHARLES — Kylee Vidrine was a one-woman vaccination machine when COVID-19 shots were first being distributed. She turned her pharmacy int…