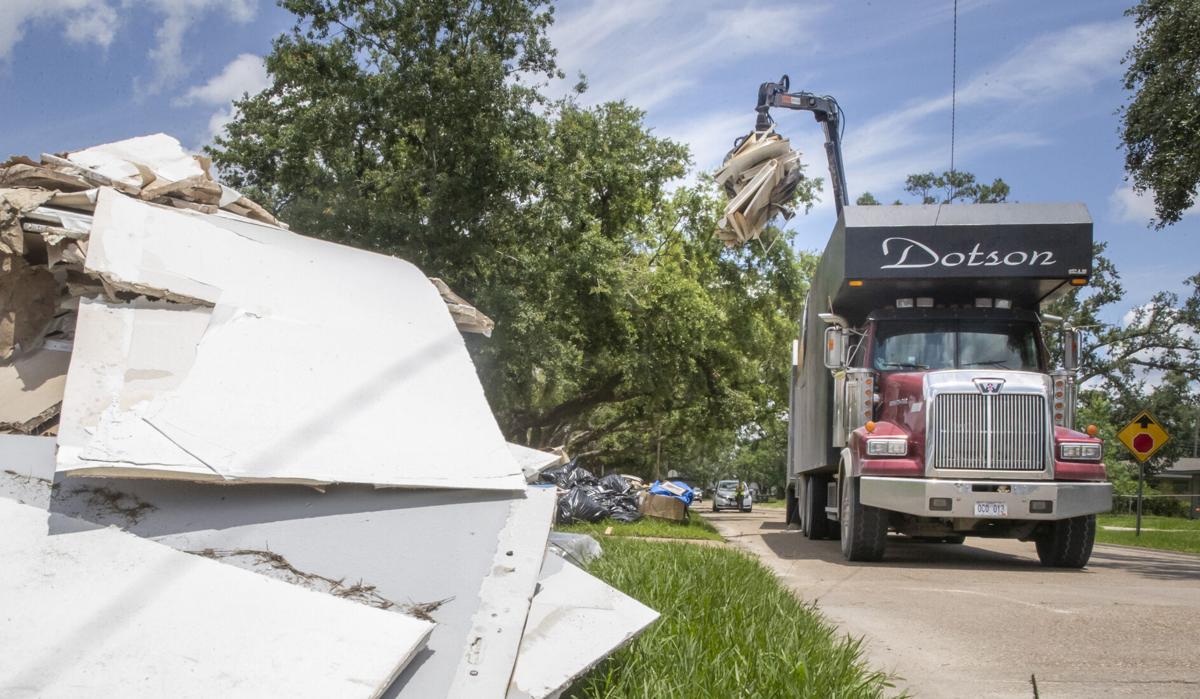 A Dotson truck removes debris from the front of homes after houses flooded in May during a rain storm in the flood-prone Greinwich Terrace neighborhood of Lake Charles on June 9. The region has a low COVID vaccination rate and a stubbornly high death rate from the virus; some residents say the various disasters that have struck over the past year are partly to blame. 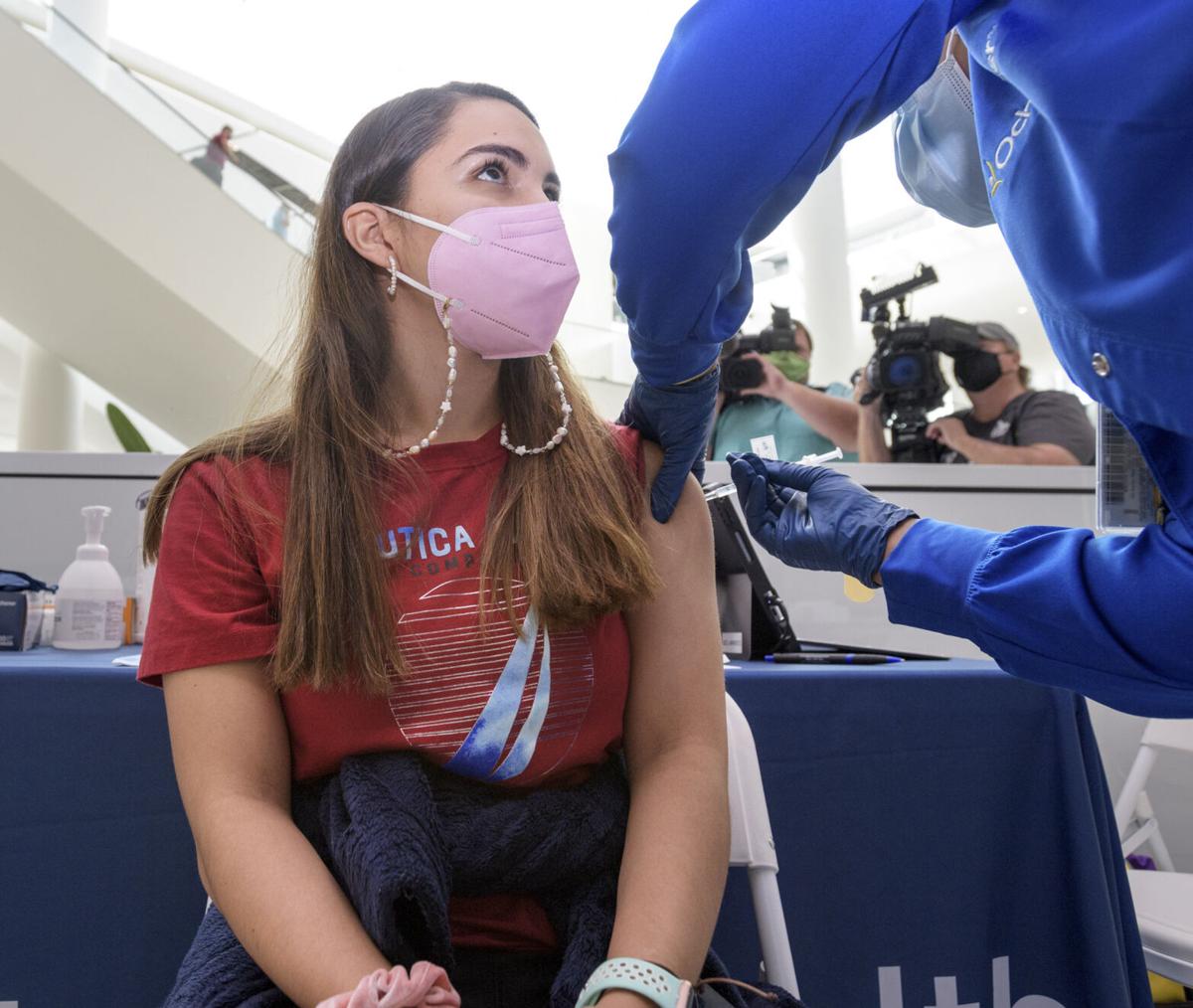 Alejandra Platero receives her a COVID vaccination at an Ochsner Health-operated inoculation site next to the baggage claim at the Louis Armstrong New Orleans International Airport in Kenner on June 29. The effort is one of many state and local officials have undertaken to boost Louisiana's low vaccination rate. 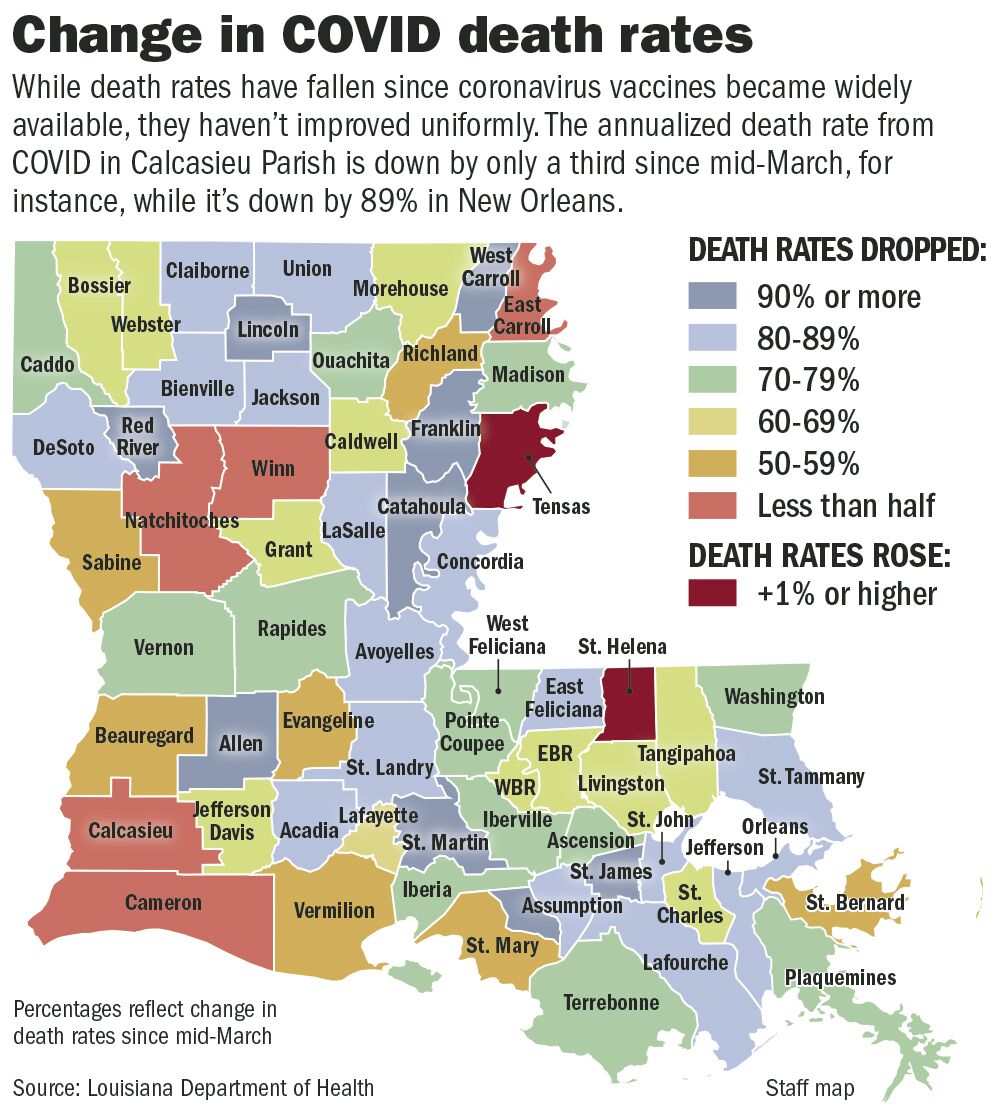 LAKE CHARLES — Kylee Vidrine was a one-woman vaccination machine when COVID-19 shots were first being distributed. She turned her pharmacy into a de facto inoculation center with a power-point explainer on a loop and zydeco music to help ease the anxious.

She was personally giving around 300 shots per day then, though she hadn’t yet convinced someone important to her: her mother.

“They think it’s not real,” Vidrine, 35, dressed in hospital scrubs, said of her mother and others as she stood among the lime-green walls of her Boudreaux’s New Drug Store on busy East Prien Lake Road in Lake Charles. “They get all their information from Facebook, and it’s people that don’t know what they’re talking about.”

It is not an uncommon predicament in the Lake Charles area despite persistent efforts from health authorities to persuade the public that the vaccines are safe, effective and the only true way to end the pandemic. A new analysis by The Advocate and The Times-Picayune of COVID-19 data since vaccines became widespread underscores how lethal the virus remains.

Data from the Louisiana Department of Health shows that the annualized death rate from the virus in Lake Charles and surrounding Calcasieu Parish over the last three months has come down by just a third compared with the pandemic’s first year. That is far below the state average decrease of 74%. And places like Orleans Parish have seen death rates fall nearly 90%.

Explaining why Calcasieu has not had the decrease in mortality seen in much of the rest of the state is complicated. It likely involves factors common to other parts of Louisiana such as low vaccination rates and limited adherence to measures such as mask-wearing, as well as complications related to the recent string of disasters in the hurricane-battered region.

Deaths often lag far behind infections, so some of those dying in recent months could have contracted the virus before vaccines were widespread. In addition, the five-parish region that includes Calcasieu had the state’s highest virus incidence rate from around late February to mid-April, when the alpha variant — sometimes called the U.K. variant — was spreading there, said acting state epidemiologist Theresa Sokol. That may be behind many of the deaths occurring since late March, she said.

The numbers underscore the importance of increasing the rate of vaccination in Calcasieu and the region. Only 27% of Calcasieu Parish’s 203,000 residents are fully vaccinated, according to state figures. (The numbers could be unreliable because of population losses due to the recent disasters.) The vaccination rate for the five-parish region is even worse, at 25%.

From the start of the pandemic to late June, the parish had a total of 450 COVID-19-related deaths. Of those, 73 have occurred since mid-March.

Dr. Lacey Cavanaugh, the state’s medical director for the five-parish region, said the challenges have been exacerbated by the number of people displaced by recent disasters: Hurricane Laura in August, Hurricane Delta in October, a severe winter storm in February and major flooding in May.

Evacuated nursing home residents have in certain cases only recently returned, she said, and some low-income residents whose apartments were destroyed have gradually made their way back. Both categories include people who tend to be more vulnerable to serious cases of the virus due to age and comorbidities.

LAKE CHARLES – Gov. John Bel Edwards said Wednesday he was optimistic legislation that could provide hundreds of millions of dollars in federa…

Beyond that, it may be that getting vaccinated has simply not been a priority for residents more concerned with rebuilding. The region as a whole has the lowest vaccination rate of the state’s nine regions — and Louisiana has the second-lowest rate of any state.

“So I think all of these things play in,” Cavanaugh said. “The shifts in our population and who's here, in addition to more cases — usually it's going to mean more severe cases and deaths, on top of the fact that we're still at risk because we have low vaccination rates.”

Those dying from the virus now are virtually assured of having one thing in common: They did not get the shot.

Despite the pandemic’s continuing toll here, there has been ambivalence about vaccines in the Lake Charles area as well as in the more rural stretches of Calcasieu Parish. Some cite political reasons in a part of the state that voted heavily for former President Donald Trump, while others say they fear the vaccines were developed too quickly and may not be safe despite repeated assurances to the contrary from experts.

Such sentiments are common across the state. But what may make southwest Louisiana distinct is that residents here have had too many other things on their minds as they work to rebuild their homes and businesses.

All of those explanations could be heard on a recent day at lunchtime at Cotten’s, a diner in downtown Lake Charles. Flipping burgers on a flattop grill as classic soul music played, owner Kate Cotten said she noticed that after the storms, many people quit wearing masks.

She said it was likely people didn’t feel as though masking up was important in light of the devastation left behind by the hurricanes. The need for personal contact in a time of crisis also played a role, she said.

“You want to shake somebody’s hand. You want to hug your friend,” said Cotten, 40, a mother of two whose home was among the many damaged. “And especially when you’re meeting these new contractors and stuff.”

She said she didn’t think it was her role to enforce mask protocols, adding she would “never get in a fight with a customer over it,” though she and her employees wore them. Cotten likewise said she believed the inoculation rate in the region remained low because of storm-related distractions.

“People are still working on the basics of having a place to live,” she said, declining to say whether she had been vaccinated.

Two customers tucking into sandwiches at a nearby table had more specific concerns related to vaccines.

Kathy Robichaux, 62, said she was concerned over how quickly the vaccines were developed but was also suspicious about what she viewed as an excessive amount of attention paid to the pandemic before the November presidential election.

“It’s funny that before the election everything was COVID, COVID, COVID,” said Robichaux, who works at a casino in Lake Charles and was on a break from jury duty. “When the election was over, you don’t hear COVID anymore.”

She said, however, that she tries to remain out of harm’s way, avoiding places with large crowds or wearing a mask if she has to be there.

Robichaux’s lunch companion, Carnetta Guidry, 59, said she had underlying health issues and was concerned over how a vaccination would affect her.

Cavanaugh agreed that storm concerns have played a role in the vaccination rate, given the time and energy required to haggle with insurance companies and rebuild.

“It’s like a second job really to deal with storm damages, and then to do it multiple times in a year, I think people are very distracted and focused on storm recovery,” she said.

However, she added, “I can't blame it 100% on that for sure, because definitely, there is access and it doesn't take that long to get vaccinated.”

Maybe there’s still hope in convincing people. Vidrine said her mother finally decided to get the shot within the last week, changing her mind in part because she babysits Vidrine’s children and doesn’t want to infect them.

“She was very isolated, and now she’s coming out, and so she’s being exposed to people,” she said. “And so she's like, ‘I don't want to catch it.’”

As southwest Louisiana’s fight for storm aid drags on, one family copes as best it can

She laughed and said jokingly: “I'm like, ‘I thought it was made up.’”

Vidrine said the 300 or so daily vaccinations her pharmacy was doing has since fallen to between 20 and 40. She said more personal interactions with knowledgeable and trustworthy experts may help change minds.

She recalled convincing one woman who came in undecided and in search of more information.

“I think if people could just have more access to actual medical professionals and not listen to the social media garbage,” she said. “It's like, when they talk to a human, it makes more sense.”

Pedestrian struck and killed by train in Sulphur

A pedestrian was killed Tuesday after being struck by a train in Sulphur.