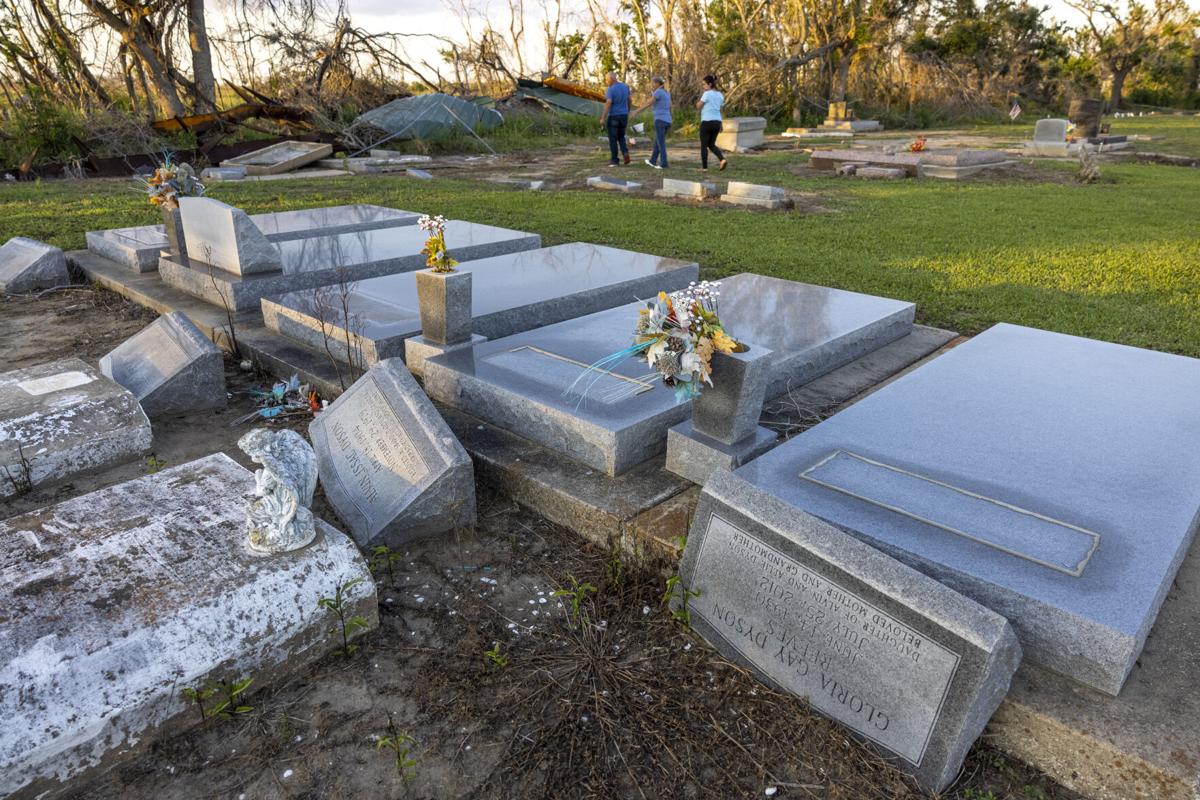 Grave markers lie dislodged May 15, 2021, at a cemetery near Creole where many caskets were washed away by Hurricane Laura in 2020. 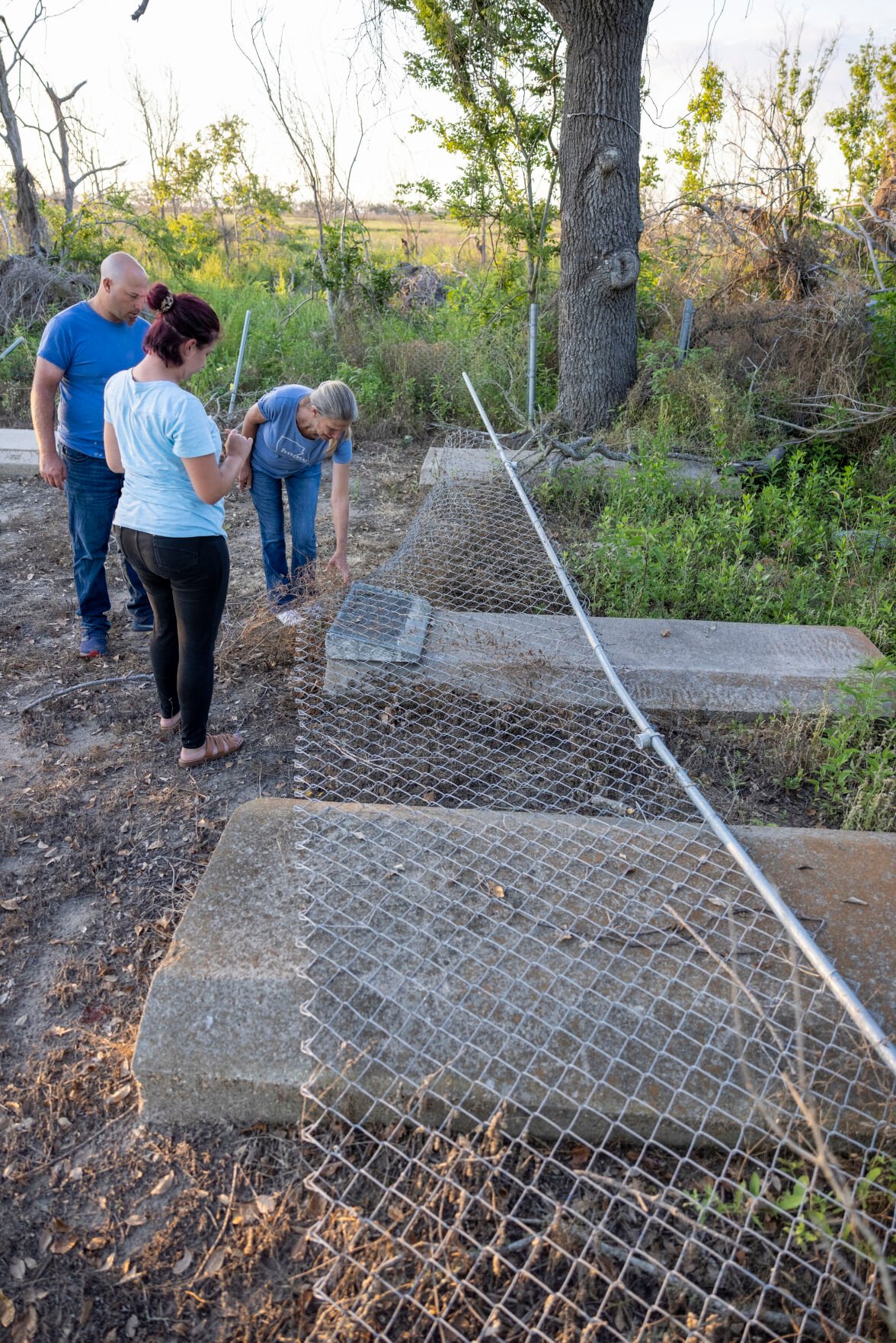 Lerlene Rodrigue reaches down to touch a gravestone where a fence has yet to be picked up at a cemetery in Creole on May 14, 2021, nine months after Hurricane Laura struck. Rodrigue stands with her son, Ira, and his wife, Lizzie. 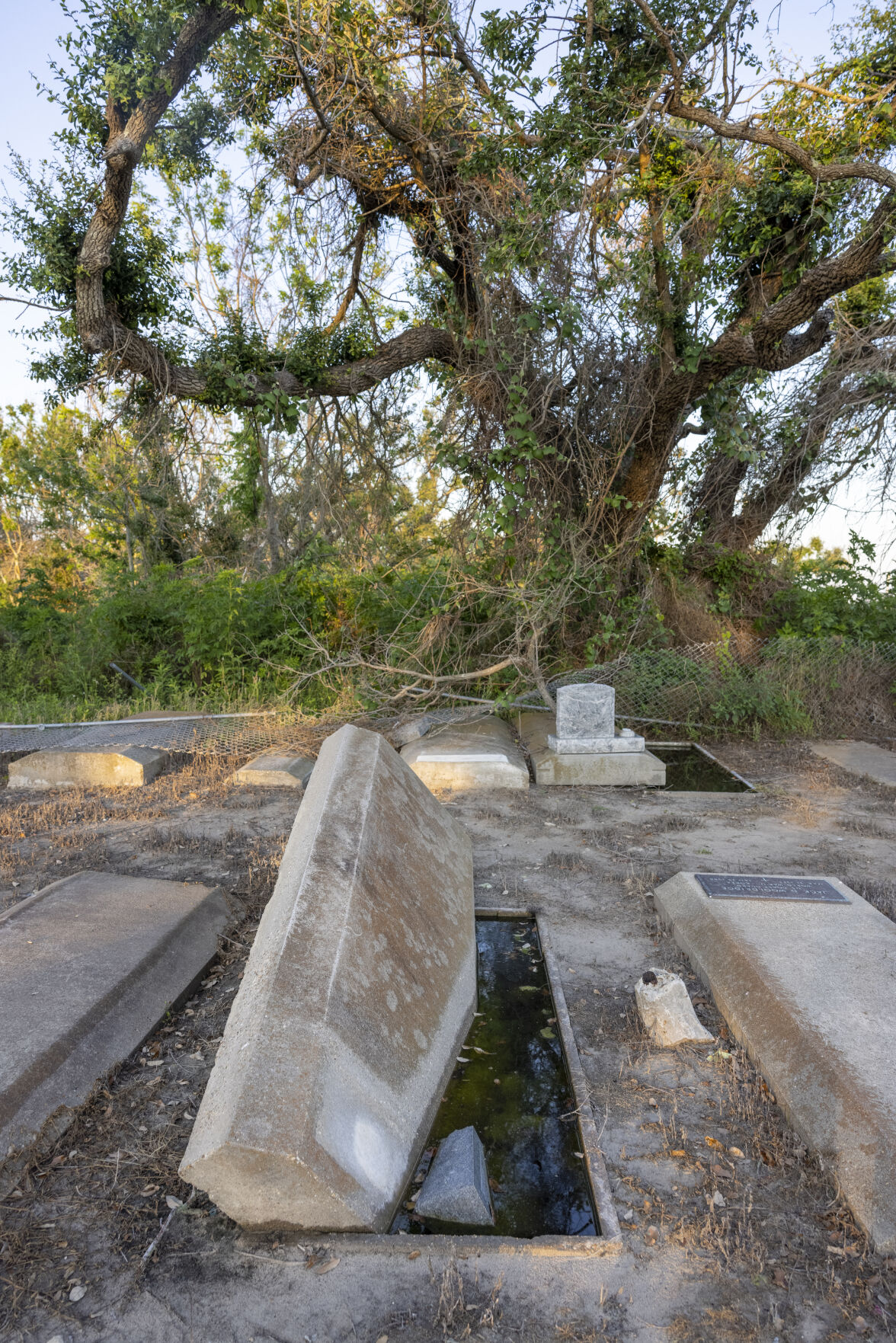 A tomb stands open in a cemetery near Creole on May 14, 2021. Many caskets floated out of tombs during Hurricane Laura in 2020 and remain missing. 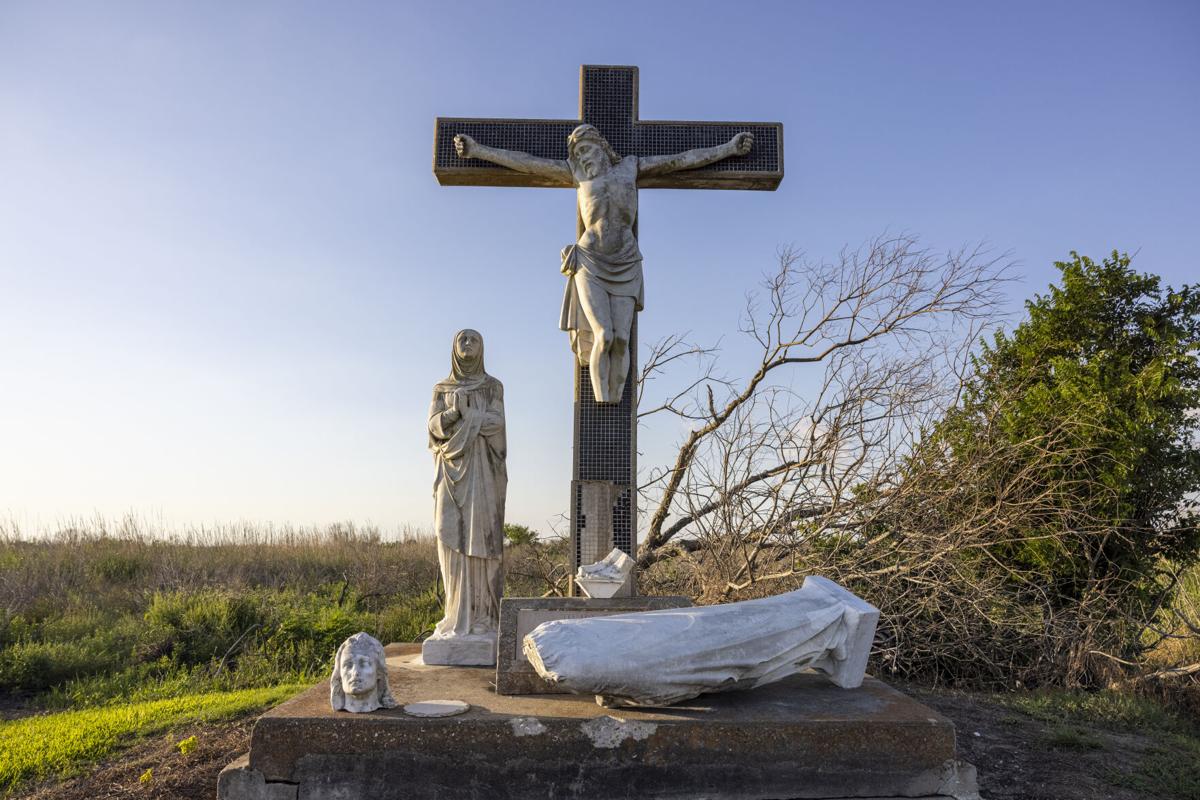 A crucifix missing its feet and a statue missing its head are seen May 15, 2021, at Our Lady Star of the Sea Cemetery in Cameron, where many caskets were washed away during Hurricane Laura in 2020. 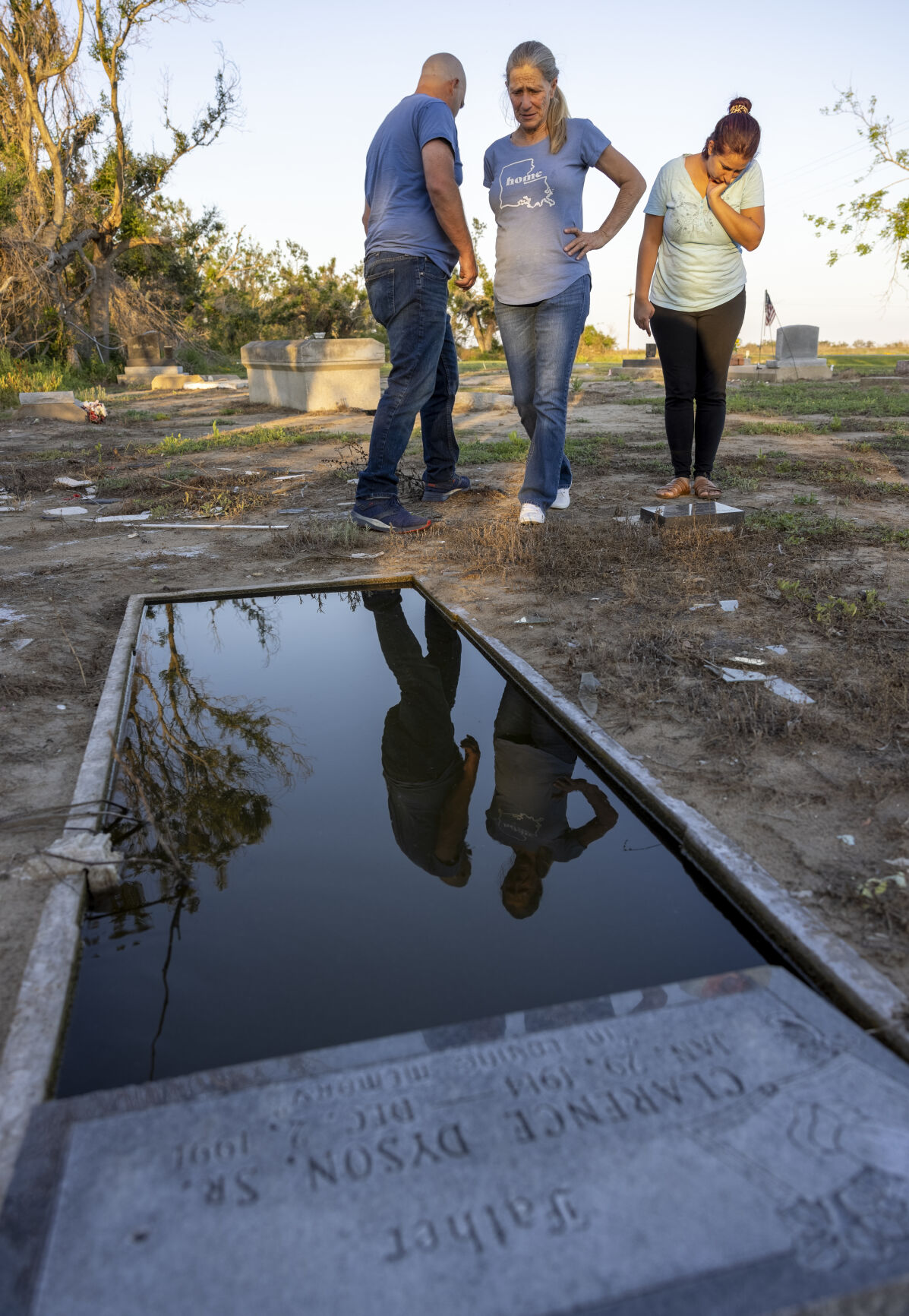 Lerlene Rodrigue, center, is reflected May 14, 2021, in a puddle of water that fills the empty tomb where her father was buried near Creole until Hurricane Laura washed away his casket in 2020. Rodrigue said his remains are still missing, presumably in the fields and marshes of southwest Louisiana. She stands with her son, Ira, and his wife, Lizzie.

CAMERON — Lerlene Rodrigue mourned the death of her father 30 years ago. Now she might have to bury him again — if she can find him.

Her father’s casket is among dozens swept away in 2020 by the surge of water that Hurricane Laura pushed from the Gulf of Mexico into Louisiana’s remote southwestern corner. Water now pools in his gravesite in a Baptist church’s cemetery, its concrete cover dislodged.

For Rodrigue, it wasn’t the first time. Her mother’s casket disappeared after Hurricane Rita in 2005, only to be found by chance 11 months later.

“It’s just a wait, and I pray they do find him because the not knowing is just unbearable,” said Rodrigue, 56.

Of all the destruction left behind by Laura’s force, the coffins swept away by its storm surge might be the most poignant. Officials estimate about 125 sets of human remains, possibly more, went missing.

About 75 have been recovered while searches continue for others almost nine months after the storm, according to the chairman of a state task force. State Police, in coordination with the task force, conduct occasional helicopter overflights, and an aerial drone program is expected to begin soon.

At one cemetery at Our Lady Star of the Sea Catholic Church, slots in a mausoleum sit open and bare. Straps over the top of one gravesite help anchor it to the ground, presumably the work of a family who took extra precautions.

Headstones sometimes portray the way of life in this part of the state, inscribed with shrimp boats and ship’s wheels. One for a man who died at age 24 says: “You have crossed the final sandbar. Now you see your pilot face to face.”

Caskets that didn’t stray far from where they were buried are easier to find and return. The odds are longer for others that have floated, sometimes for miles, among the region’s mazes of marshes, bayous and lakes.

That could be the case for many lost in Laura, the most powerful hurricane to hit Louisiana since 1856.

“We are aware of ones that have been recovered from as little as five miles away. I think some of them may have been a little farther,” said Ryan Seidemann, chairman of the Louisiana cemetery response task force and chief of the lands and natural resources section at the state attorney general's office. “But they do travel with that storm surge.”

Rodrigue’s father, Clarence Dyson Sr., died in 1991 from congestive heart failure at the age of 77. Father of 15, he supported his family as a commercial shrimper and oyster farmer, making his living with a relatively small boat and an outboard motor, Rodrigue said.

He taught his children the craft, and Rodrigue, mother of four, followed in his footsteps as a rare woman in the business. For a time she used an oyster boat with pink trim and the name That Bitch Is Back. She said she named it that way because that’s what she’d hear when she’d arrive at the reef.

She along with other relatives live in the tiny community of Cameron within Cameron Parish, a place of raised houses and shrimp boats between the Gulf and Calcasieu Lake. On a recent day, a neighbor roamed in a golf cart and children played in the yard around the home of Rodrigue’s sister.

The area can feel like it's at the end of the world, with the scent of the marsh in the air and the tides incessantly lapping at its shores. But there are signs of change: A new liquefied natural gas plant is being built in the distance, joining two others already operating in the area.

Cameron was heavily damaged by Laura. Many residents are still rebuilding, including Rodrigue, whose trailer took on water despite being 16 feet above sea level. It remains gutted. Rodrigue is living temporarily in a trailer in her yard, next to the oyster boat she used to run, a hole now punched in it by Laura near the brassy name painted in pink.

Nearby houses were ripped from their foundations and sheds crumpled like paper balls in Laura’s storm surge and winds of up to 150 mph.

Rodrigue’s older sister, Shirley Dyson, 61, lives across the street from her. Dyson, along with her fiancé, has been repairing her own elevated trailer. Before Laura, they all evacuated - a must in this part of Louisiana for anyone with a brain, as locals will tell you - and made it back once the water receded.

Dyson, mother of two children and another now dead, recalled crying upon returning to Cameron and seeing the state of her home and neighborhood. But when asked if she’d consider moving away, given the risks, she was unequivocal.

She said her response to people who ask that has been: “How do you like your hometown? ‘Oh, I love it.’ Well, you know what? I feel the same way. I’ve been raised on water all my life.”

As for the cemeteries, Dyson said that when she went to one after she returned, “The bodies were hanging out of their caskets. There were bones, and it scared me.”

Rodrigue had received a call from another sister informing her of their father’s grave. She said she started crying.

“Momma went for Rita, and now Dad for Laura. What do you do? Because not only did you have Laura take him, but how far did Delta push him?” she said, naming the Category 2 hurricane that hit the same area about six weeks later.

Her mother, who was buried next to her father, was found only because of operations linked to an oil spill, she said. Her coffin was located about 45 miles away by boat, wedged in the mud in a place called Hebert’s Landing. Now the family finds themselves hoping again.

The problem is not a new one. There have even been reports of a small number of caskets that were lost in Hurricane Audrey in 1957 but not found for almost a half century, until Hurricane Rita washed them up again, Seidemann said.

After Laura, the task force recovered caskets that were already marked as having been dislodged both in Rita in 2005 and in Ike in 2008. "So for some of these, this is their third time being pushed out of their graves,” Seidemann said.

The task force does more than organize searches for missing caskets. It also coordinates repairs to cemeteries damaged in storms, Seidemann said.

But in Cameron Parish, the main concern is caskets disappearing. The task force seeks information from families and communities in addition to its own surveys, although that can take time because after a storm residents are “concerned about the living, and of course that’s got to be the first focus,” he said.

Heavy thunderstorms inundated streets, stranded residents and flooded hundreds of homes in Lake Charles and other parts of southwest Louisiana…

When a casket is spotted from above, location data is gathered and transferred to airboat and marsh buggy operators to retrieve them. Conventional forensic methods are used to identify the remains, Seidemann said. DNA testing is not employed because it would be difficult given the condition of the remains and is not in any case financed by FEMA, he said.

Coming up with ways to secure caskets in graves in the future is beyond the purview of the task force. Some families, however, have begun taking their own precautions by covering the gravesites with dirt instead of simply a concrete top. Rodrigue’s family reburied her mother that way.

Rodrigue visited her father’s gravesite recently, standing over the pool of water where his casket once rested, her shirt reading “Home” over an image of Louisiana. The family thinks a trailer frame dislodged the concrete on top of the grave and allowed the casket to float away.

Burying one's father once can be painful enough. But at least in this case, she said, it would be a “very good thing if we can do it again.”

SULPHUR - Robin Baudoin rode out Hurricane Laura in her house, taking cover in a bathroom with her daughter and two others, along with nine ca…

In Lake Charles, Joe Biden stumps for hurricane relief, new I-10 bridge: 'It shouldn’t be this hard'

It's not just flooding: Baton Rouge is in violation of environmental rules for stormwater