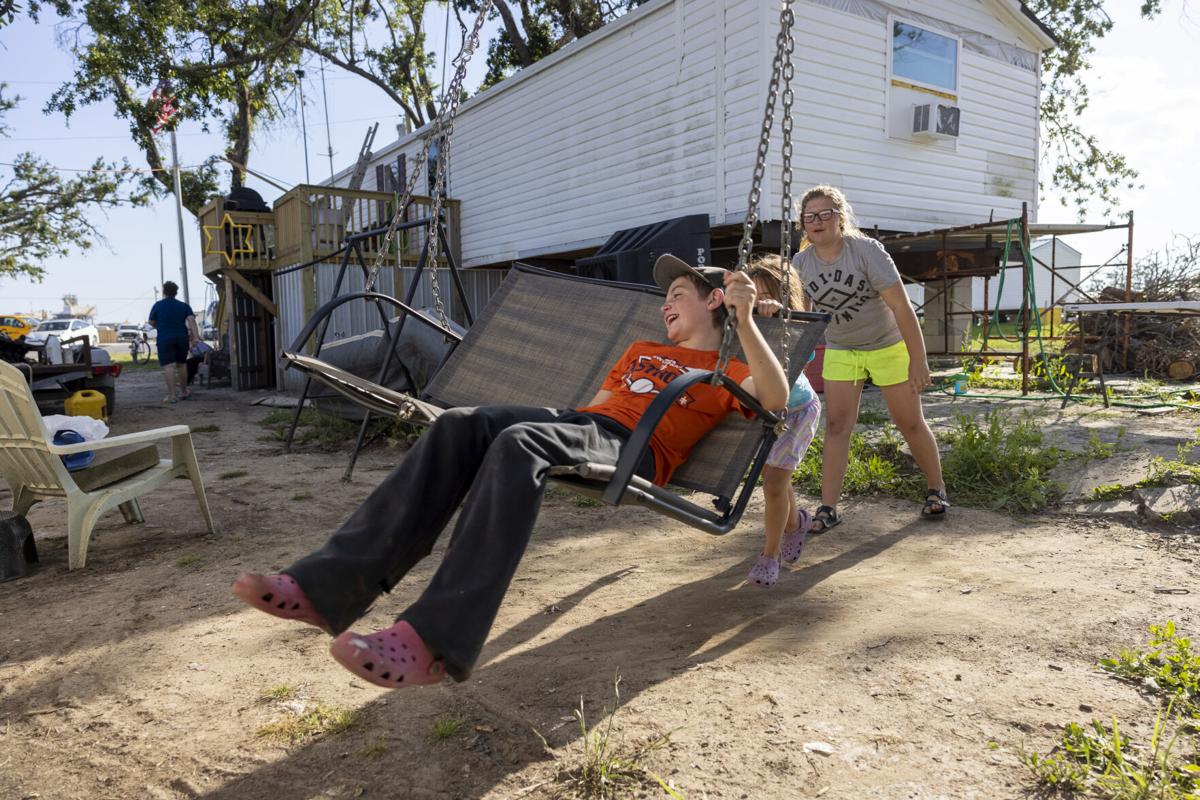 Kids play on a swing less than a mile from the Gulf of Mexico in Cameron, Louisiana on Thursday, May 13, 2021. (Photo by Chris Granger | The Times-Picayune | The New Orleans Advocate) 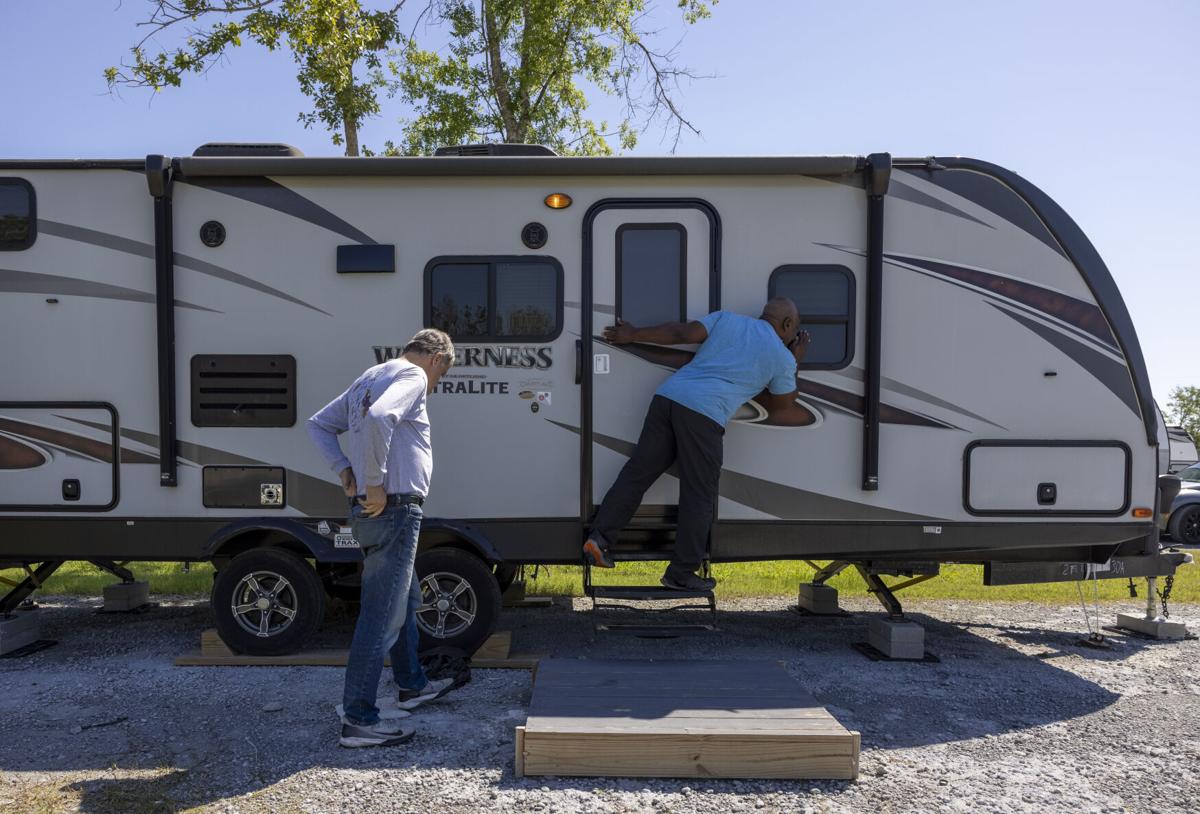 Christopher Owens, center, peers into the window of a FEMA trailer as he helps Jeffrey Babcock, 48, settle into his temporary home in Lake Charles on Thursday, May 13, 2021. (Photo by Chris Granger | The Times-Picayune | The New Orleans Advocate) 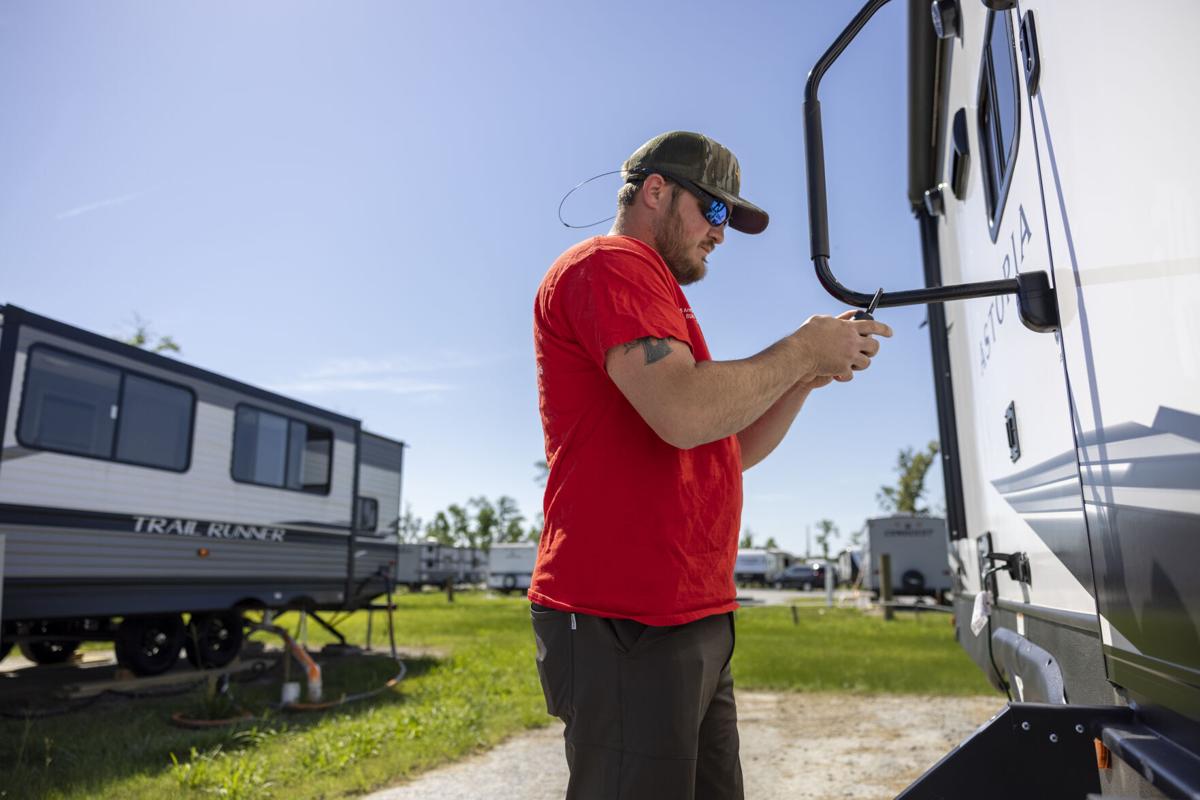 Zach Lee, a maintenance mechanic with the Army Corps of Engineers, unlocks the door to a FEMA trailer in Lake Charles for an inspection on May 13. 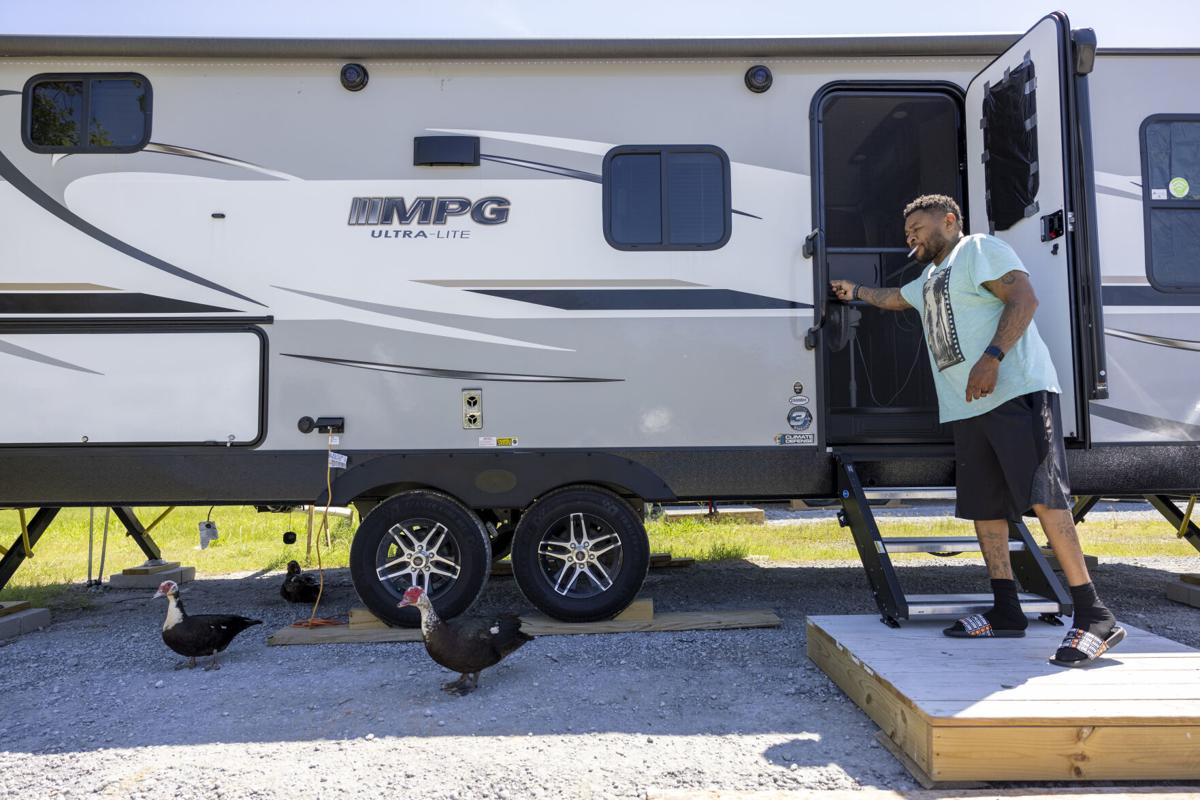 Burnell Turner, 52, steps out of his FEMA trailer as he eyes the ducks hanging out around it in Lake Charles on May 13. 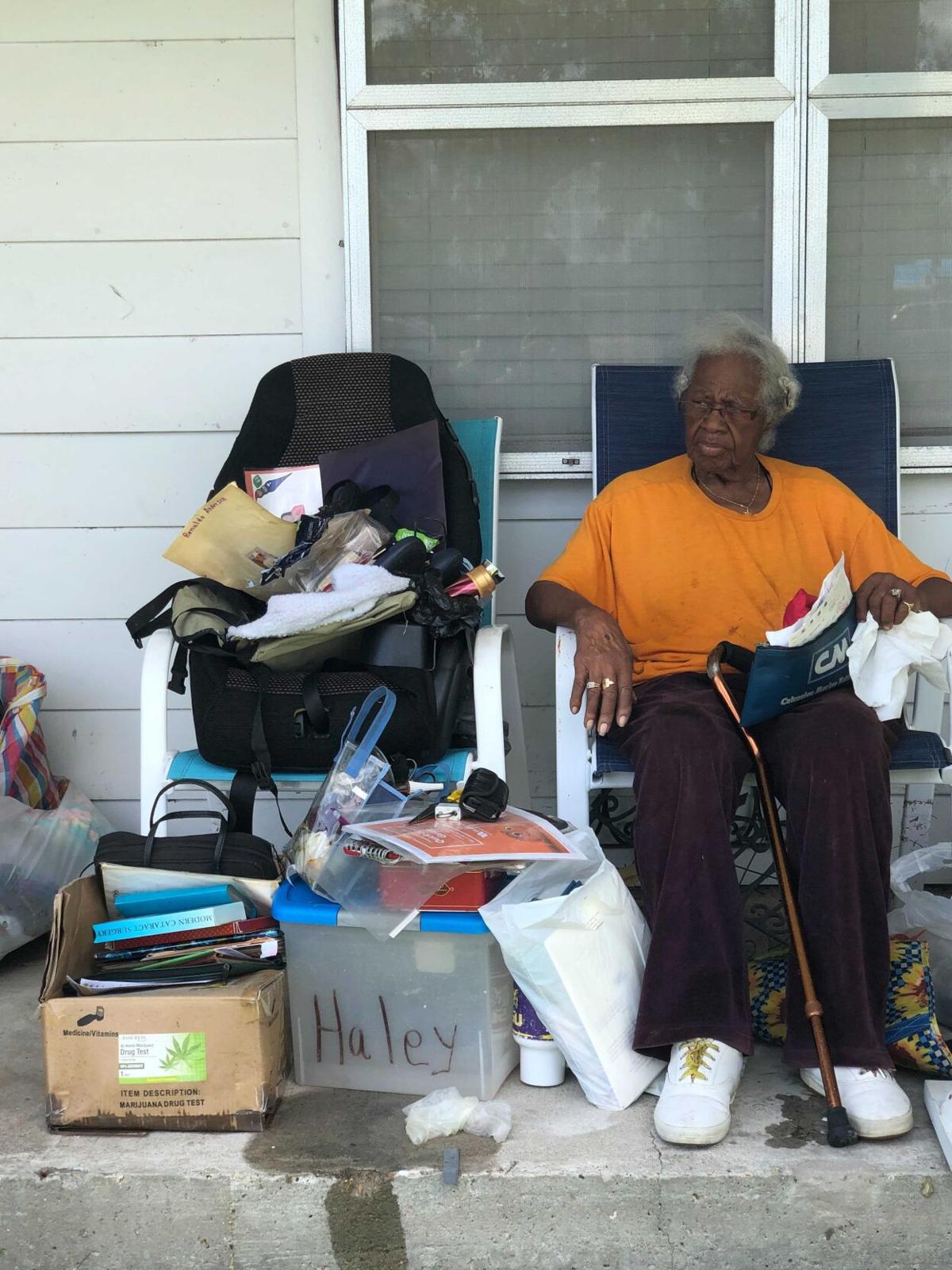 Julia Dozier, 90, sits outside her former home in Lake Charles. She is now living with her son after floodwaters forced her from her public housing duplex. 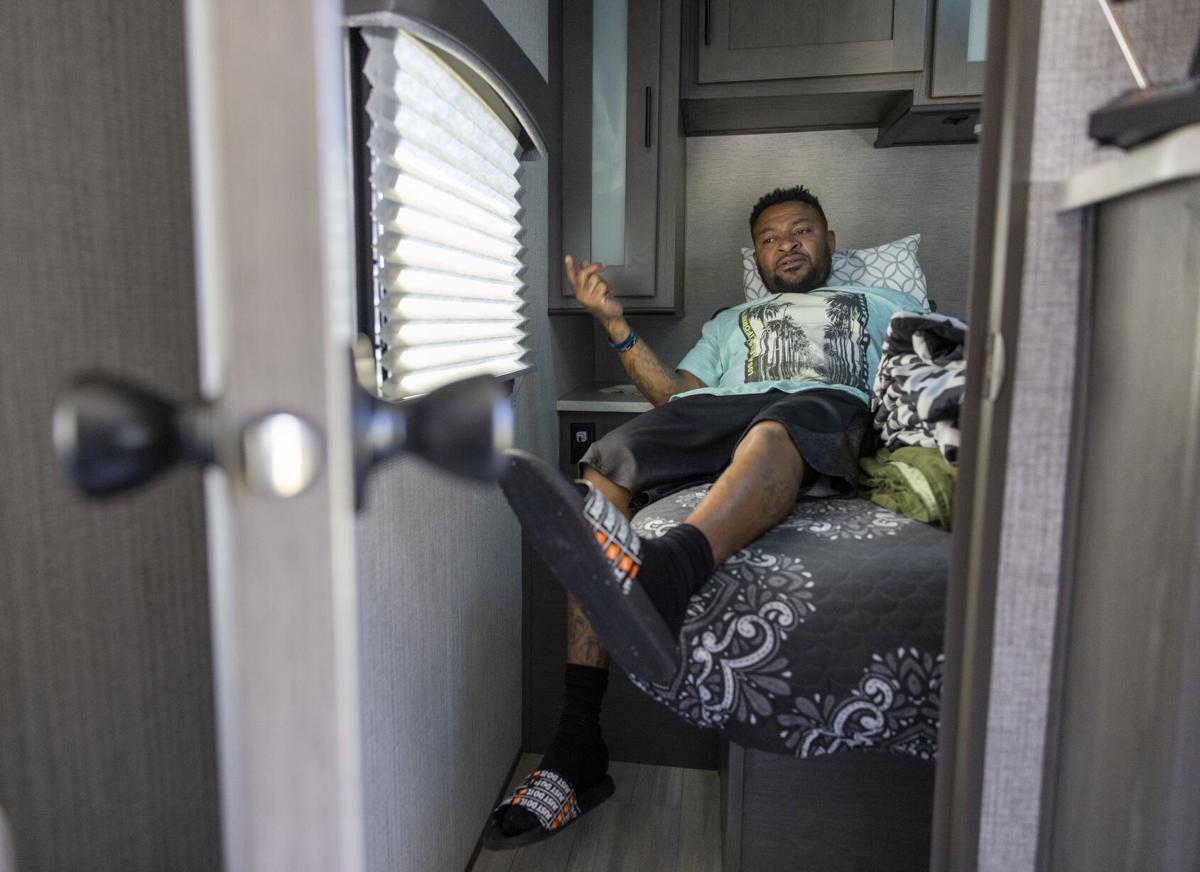 Burnell Turner, 52, sits in his bedroom while watching television in his FEMA trailer in Lake Charles on May 13. 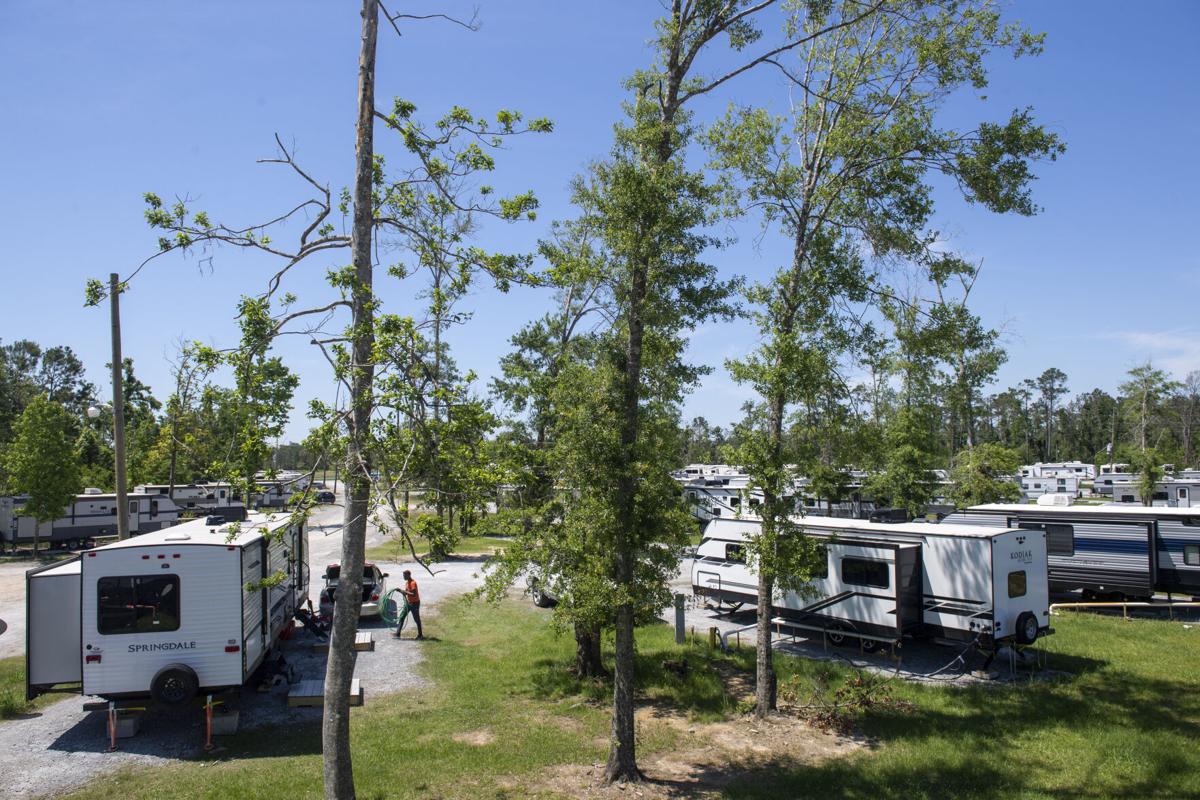 FEMA trailers sit in a campground just north of Lake Charles in May.

Kids play on a swing less than a mile from the Gulf of Mexico in Cameron, Louisiana on Thursday, May 13, 2021. (Photo by Chris Granger | The Times-Picayune | The New Orleans Advocate)

Zach Lee, a maintenance mechanic with the Army Corps of Engineers, unlocks the door to a FEMA trailer in Lake Charles for an inspection on May 13.

Burnell Turner, 52, steps out of his FEMA trailer as he eyes the ducks hanging out around it in Lake Charles on May 13.

Burnell Turner, 52, sits in his bedroom while watching television in his FEMA trailer in Lake Charles on May 13.

LAKE CHARLES – By the time Clara Gaines made it back home, the nearly waist-high water outside was already flooding her house. Shoes and toys drifted out toward the front yard when she opened the door, as if they’d been tossed into a bayou.

She grabbed whatever clothes she could and floated them in plastic containers toward her car and her son’s truck parked nearby.

“It was like a movie,” Gaines, 54, said of the May 17 flood while back at the house on a recent day, dressed in the scrubs from her hospital job. “When we opened the door, everything was rushing out of there. I was like, ‘Catch it!’”

Gaines, her daughter and two of her grandchildren squeezed temporarily into another family’s trailer before moving in with relatives. They are among the many struggling through a shortage of affordable housing in the Lake Charles area. Her daughter has a voucher from the Lake Charles Housing Authority to move into another two-bedroom home, but so far they haven’t found one available.

Last year’s two hurricanes badly worsened an already-scarce affordable housing market, a shortage compounded by this month’s floods. One official says the problem is becoming a crisis, keeping some of the displaced from returning and leaving others who have come back in a scramble for shelter.

Even before last year’s hurricanes, workers linked to the region’s expanding petrochemical and energy sector had helped drive up rent prices, leaving affordable housing in short supply, local officials say. Around half of the homes in Calcasieu Parish received hurricane damage ranging from light to complete destruction, according to a study by McKinsey & Co., a consultant. The recent flooding was a knockout blow for some residences that had still been livable.

The loss of so much low-income housing has taken the biggest toll on renters and the working poor, many of whom have also had to deal with pandemic-related furloughs and layoffs. But homeowners have felt the squeeze as well since they have had to find temporary places to live while haggling with insurers over repair costs – a process that, for many, continues nine months after Hurricane Laura.

What kinds of permanent demographic changes could be in store for Lake Charles -- given the number of people still displaced and the possibility that a certain percentage may never return -- is a question that may take much longer to answer.

Southwest Louisiana’s plight has nonetheless received little notice outside the region, and local officials have grown desperate in trying to draw attention to their needs following Hurricane Laura, the strongest storm to hit Louisiana in more than 150 years, and Delta, a Category 2 storm that took a similar path only about six weeks later.

“I think the word that I would use is that it’s serious,” Tarek Polite, director of human services for Calcasieu Parish, said of the housing crunch. “It’s definitely a serious issue, and I don’t know whether or not the word crisis is appropriate, but if it’s not, it’s approaching a crisis for the most part. So basically if something is not done very soon, it’s going to force many people to have to move away, move to other communities, certainly in the short term.”

Julia Dozier, 90, and her tiny dog Gigi had been living around the corner from Gaines in a public housing development of one-story duplexes in southern Lake Charles. They were among the few still residing in the complex after the damage from last year’s hurricanes.

Much of the area now has a post-apocalyptic feel, with houses damaged and abandoned, blue tarps covering roofs and grass growing wildly. A pickup truck with its windshield smashed remains parked outside of one, and ruined personal belongings and furniture are still piled at curbsides.

Dozier’s roof was damaged by Laura, but it was patched and she returned. Only recently though, she and others left in the neighborhood received notices saying they would have to leave to allow repairs to hurricane damage to take place.

It wouldn’t end up mattering. On May 17, floodwater inundated the neighborhood, and Dozier barely managed to grab her dog as the water began entering her home. A relative drove up to the house in a school bus to rescue her.

She’s now staying with her son, but it’s a tight fit. Her son and his wife gave up their bedroom for her and they share a room with their grandson.

Dozier’s duplex is unlivable. The water inside of it rose ankle-high, a line now marked by black mold on the walls. Water entered through the doors as well as the ceiling that had been patched. Old family photos were among the casualties.

Her family is hoping FEMA will provide her with a trailer on her son’s property. Dozier and a daughter-in-law and grandson were back at her old home recently clearing out her belongings.

“That water was coming in like a wave,” said Dozier, who also remembers surviving Hurricane Audrey in 1957 and remains alert and capable, preferring to live on her own.

Beyond her son and his wife needing the space, the move marked a major change for her “when you’re used to being by yourself.”

Advocates for affordable housing and local officials who oversee such programs agree on the need for more housing stock.

Ben Taylor, director of the Lake Charles Housing Authority, said his agency’s public housing was down around 30% due to the storms, and the portfolio of apartments rented out through the Section 8 program were reduced by around a quarter.

Polite, whose agency oversees Section 8 units outside the city limits, said around 100 or so of its apartments were damaged, though some of those have since been repaired. The agency was down to around 300 Section 8 units for a variety of reasons, though it’s budgeted for 574, he said. Its waiting list is currently between 60-70 households.

Data from 2019 in the McKinsey housing study shows that nearly half of 23,000 renting households were considered rent-burdened, meaning they spent at least 30% of their income on housing. It said that women, the elderly and African-Americans were the most likely to be in that situation.

Nonprofit leaders say demand for assistance has shot up since the storms. Charla Blake, executive director of Project Build a Future, which assists with home purchasing among other projects, calls the need for affordable housing “astronomical.”

“When you look at how many homes were damaged and how many of those were rental properties, and you look at the sections of town in which some of the rebuilding is not going on because either those owners or renters were under- or not insured, then you hit a population that was already strapped to begin,” she said.

Thanks to the pandemic, Blake said, “you have a population that has been hit two and three times in the last year.”

Section 8 vouchers have included what is known as portability, allowing residents to move anywhere they could find suitable housing. Some ended up as far away as Colorado and Illinois, said Taylor.

He spoke of the difficulties beyond the practical struggle to rebuild.

“If you lose everything, you lose everything. It sets you back,” he said. “You’re dealing with not only the physical damage … I’m not a real touchy-feely person, but there’s things that you have happen that you just go, ‘Damn, what did we do to deserve this?’”

It all raises questions about the future of the region’s population.

SULPHUR - Robin Baudoin rode out Hurricane Laura in her house, taking cover in a bathroom with her daughter and two others, along with nine ca…

But that was before the pandemic, the hurricanes, a harsh winter storm in February and the recent flooding. Lake Charles estimates around 3,000 people remain displaced nine months after Laura and a recent analysis by The New York Times found Lake Charles had lost around 6.7% of its population in 2020 – the highest of any metro area in the nation. It is unclear how many of those people may have since returned.

FEMA has provided 2,145 households with temporary housing like travel trailers and mobile homes; another 373 have been approved and are still waiting to move in. The agency says ensuring sites for mobile homes meet specifications has caused much of the delay.

“We were lucky to get a call for him,” said Shermier Owens, 49, as she and her husband arrived at a Lake Charles RV park to have a look at a trailer being supplied for Jeffrey Babcock, whose apartment was destroyed by Laura.

Babcock, a 48-year-old with special needs whom they care for, had been staying with the Owenses, making for a total of seven people in their three-bedroom home.

There is a strong will among locals to build back, but officials and residents say it’s too much to do alone. Lake Charles Mayor Nic Hunter has argued in favor of federal assistance for something resembling the post-Katrina Road Home program, which could help fill the gap between what residents get from insurance companies and what they need to rebuild.

In the meantime, residents like Gaines say they are about at the end of their rope. Laura made her public housing unit unlivable, so she moved in with her daughter and her two children. Her daughter’s home flooded this month.

Mold grows on the walls inside that home; piles of clothes and furniture sit among mildew waiting to be moved. A family picture from Chuck E Cheese still adorns the refrigerator.

“We make a way,” Gaines said when asked how all seven people fit in the trailer where they had been staying as a punishing sun beat down on a recent afternoon. “I’m trying to keep it positive. You got to do what you’ve got to.”

After season of struggle in Lake Charles, McNeese playing for more than wins at NCAA tournament

LAKE CHARLES -- The first thing you might want to know about McNeese State’s baseball season is that head coach Justin Hill, like so many peop…