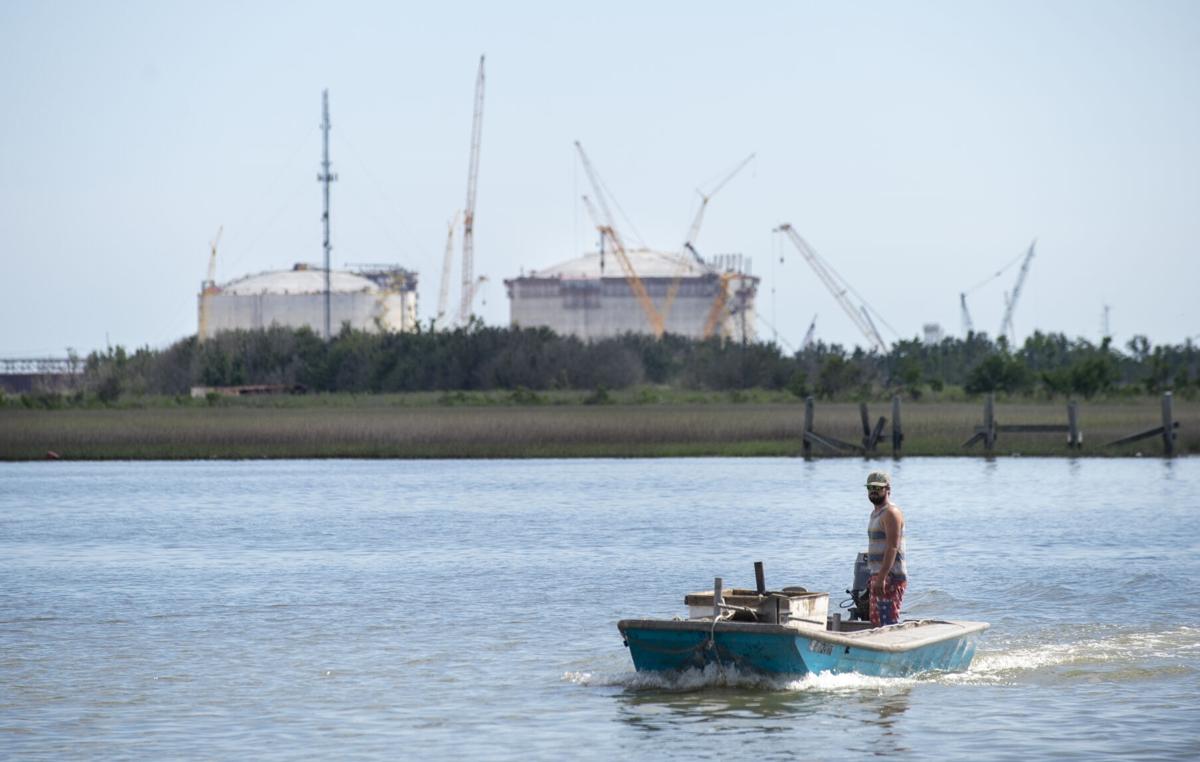 A fisherman goes down Calcasieu Pass where the Venture Global LNG plant is under construction in Cameron, Louisiana on Thursday, May 13, 2021. (Photo by Chris Granger | The Times-Picayune | The New Orleans Advocate) 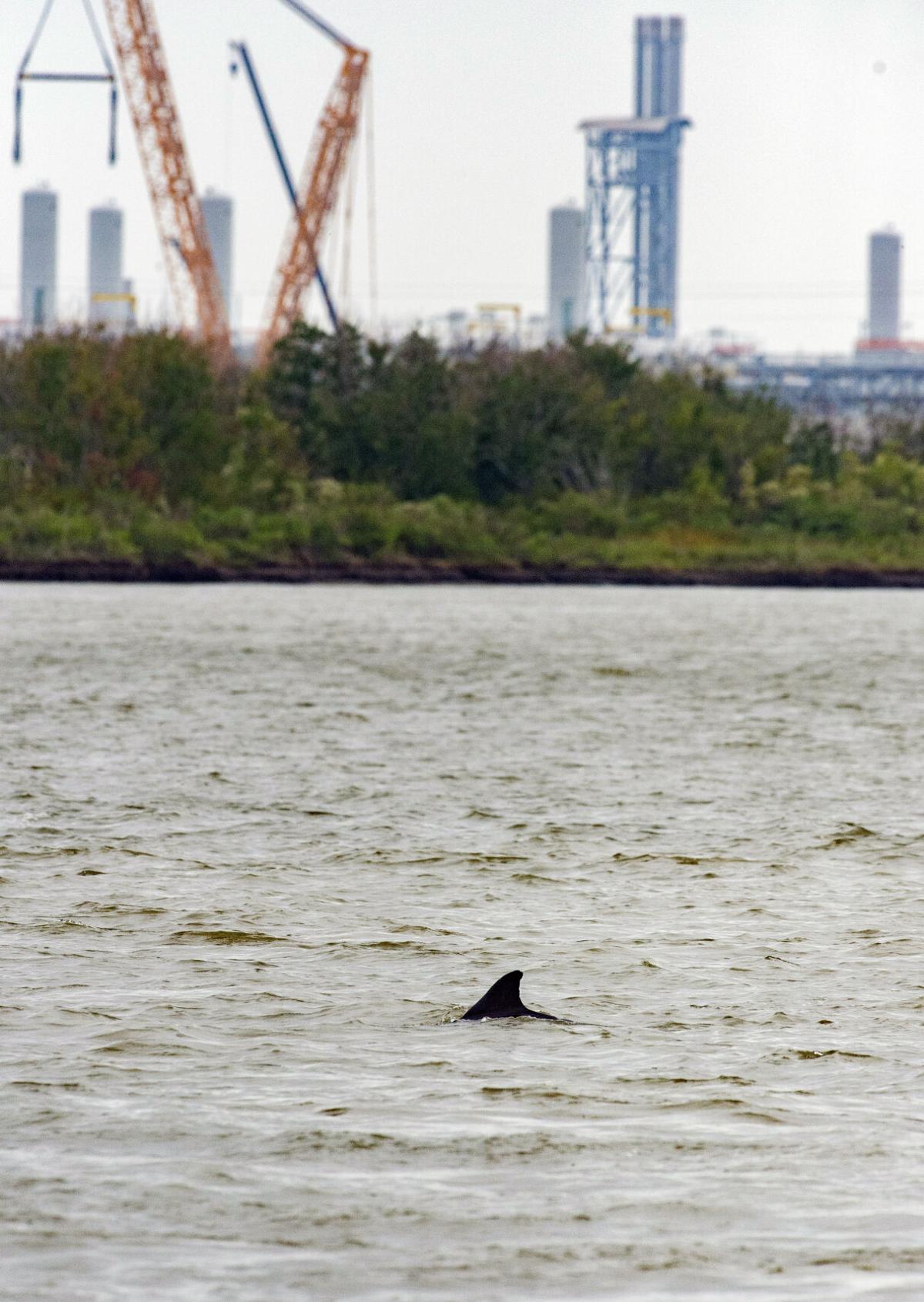 A dolphin arcs partially above the surface of the water in Calcasieu Pass as construction continues on the Venture Global LNG plant Tuesday, October 26, 2021, in Cameron Parish.

LAKE CHARLES – Southwest Louisiana has quietly become the nation’s largest exporter of liquefied natural gas – much to environmentalists’ dismay – and industry leaders gathered in this city Wednesday to discuss how best to move ahead at a time of deep concern over climate change.

The need for the industry to reduce greenhouse gas emissions was a key theme at a conference that brought together state and local officials along with executives from companies involved in LNG production. The previous day, environmental activists gathered near the conference venue to draw attention to the dangers they say the industry poses.

The conference came as this week’s global climate summit continued in Scotland. Gov. John Bel Edwards, who has touted the benefits of LNG as a transitional fuel, was among those attending the summit in Glasgow aimed at turning the tide on global warming, which particularly threatens Louisiana through rising sea levels and more intense hurricanes.

The state and LNG companies tout the fact that natural gas burns far cleaner than coal, which they say make it a viable alternative for electricity production as countries move gradually toward renewable energy. Liquefying it through a supercooling process – which in itself requires large amounts of electricity – makes it easy to transport.

LNG companies have flocked to southwest Louisiana due to a combination of natural gas supply, pipeline infrastructure and deep-water access for shipping. They have also received big tax breaks through the state’s Industrial Tax Exemption Program.

Louisiana has bet big on liquefied natural gas. Is it a good bet?

The state has embraced the industry because of the multi-billion-dollar investments and jobs it brings, as Lt. Gov. Billy Nungesser made clear at the conference. Two export terminals are operating out of Cameron Parish in the state’s southwest, with expansions planned, and at least five others have been approved but are not yet up and running statewide. Another three have been proposed but not yet approved.

“I was in the oil and gas industry before I retired, so I understand the importance of having elected officials to stand up for you and whatever your needs are,” Nungesser said in his speech. “So use me and my office to help you in any of your endeavors to make sure your project moves forward quickly.”

Lake Charles Mayor Nic Hunter spoke of the four weather disasters his city has faced since Hurricane Laura in 2020 and said the LNG industry has an important role to play in the region’s recovery, calling its investments a “game-changer.” He defended the region’s embrace of LNG, though he said southwest Louisiana should not overly rely on it.

“Just as it would be foolish and shortsighted for elected officials to believe that the energy industry will ever be what it was 30 years ago, or that we should not be open to progress, it is similarly foolish and shortsighted to believe that such a change will happen overnight or that LNG cannot be a component of a modern energy outflow for decades to come,” he said.

But it is in part because of weather disasters like those that have befallen Lake Charles that environmentalists warn about LNG. While it is cleaner than coal, it still produces significant levels of greenhouse gases, which trap heat in the atmosphere. Scientists say the global warming that results causes storms to intensify.

The activists who gathered near the Golden Nugget casino on Tuesday said southwest Louisiana should move away from LNG.

“What we have is a climate crisis, and what we don't need is more plants putting out greenhouse gases that will continue to exacerbate the problems,” said James Hiatt of the Louisiana Bucket Brigade, among several activist groups that gathered, including Healthy Gulf and the Sierra Club.

LNG companies are clearly aware of a shift in attitudes regarding greenhouse gases and energy production. Some expect regulators to eventually begin requiring CO2 emissions reductions, and much of that could come in the form of carbon capture and storage technology, which is also deeply controversial among environmentalists.

Anatol Feygin, vice president of Cheniere, whose terminal at Sabine Pass in Cameron Parish is the nation’s largest, said “we have to do the right job together with our suppliers and customers of making sure that we have the right environmental footprints to keep gas and LNG as part of the solution for decades to come.”

“This is going to be a key part of the equation going forward and something that Cheniere and, we believe, the rest of the industry needs to focus on,” said Feygin, who spoke by videoconference.

Big plans with a big runway: Historic Louisiana airport seeks to transform itself

LAKE CHARLES - It’s been a Cold War air base, a deserted strip used for drag races and driving lessons, and more recently a site for training …