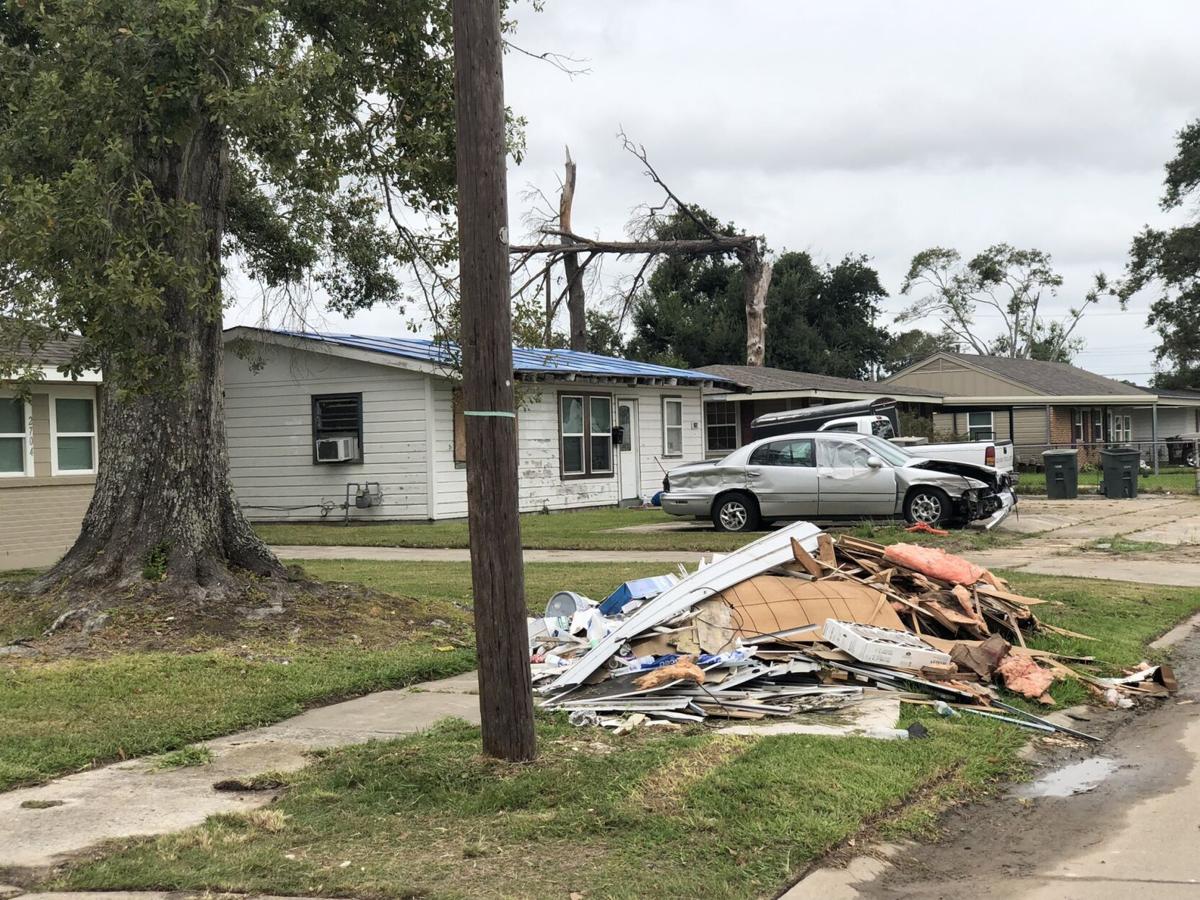 Material from gutted homes and blue tarps can still be seen in the Greinwich Terrace neighborhood of Lake Charles. 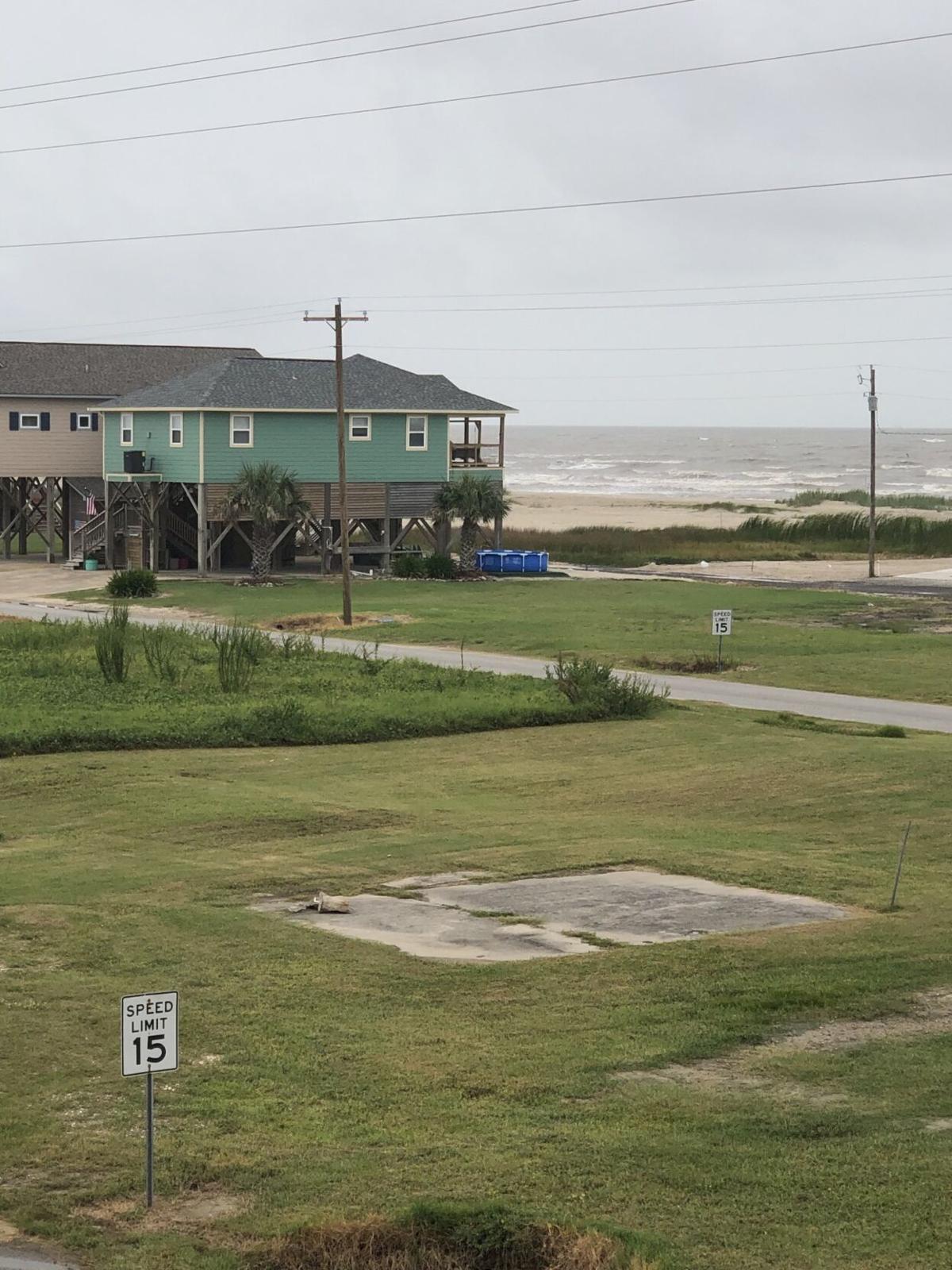 Holly Beach had begun to see high winds and waves from Tropical Storm Nicholas on Monday. 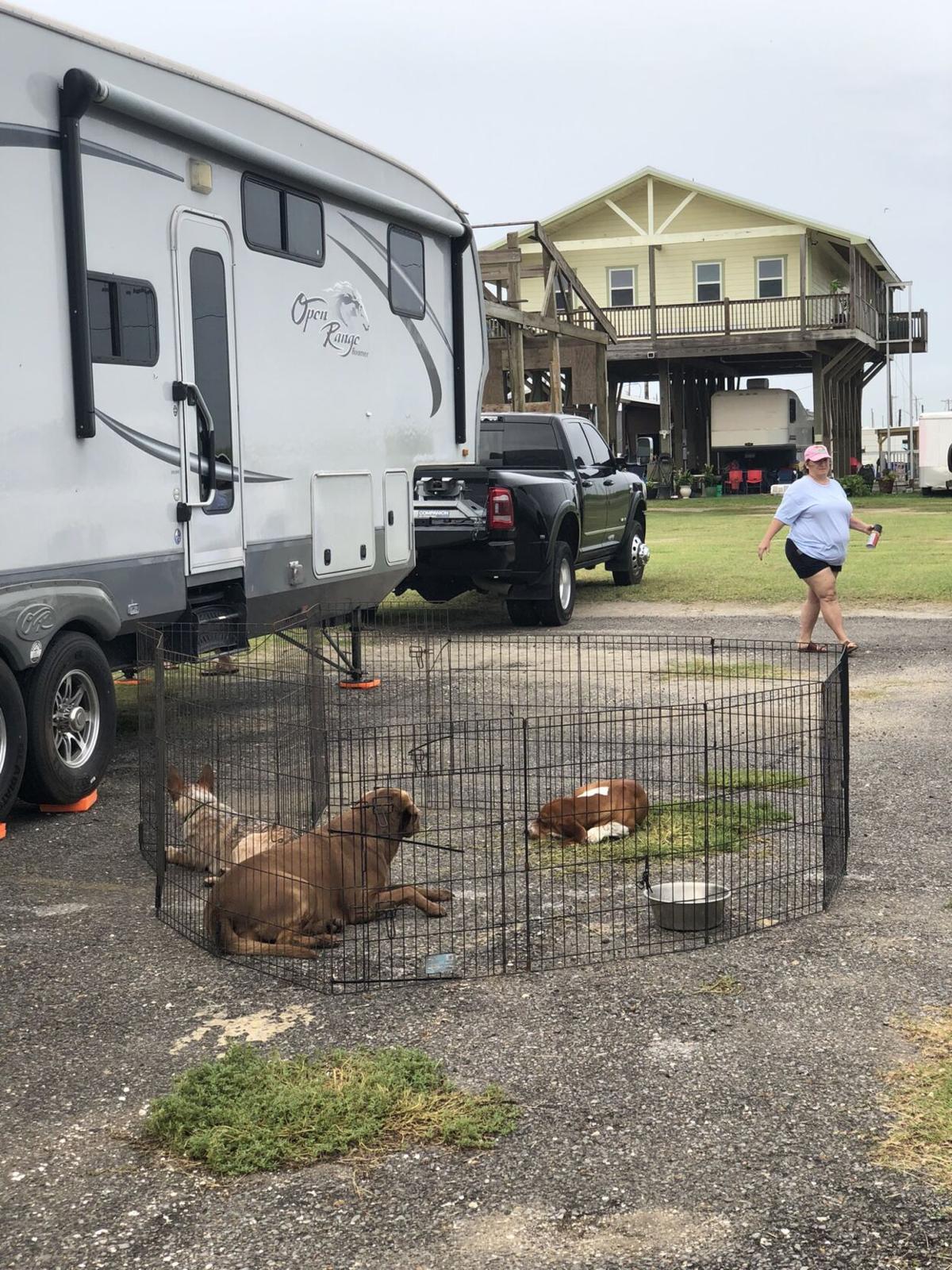 Colletta Lejeune and Guy Foreman were moving their travel trailer along with their three dogs away from Holly Beach ahead of Tropical Storm Nicholas. 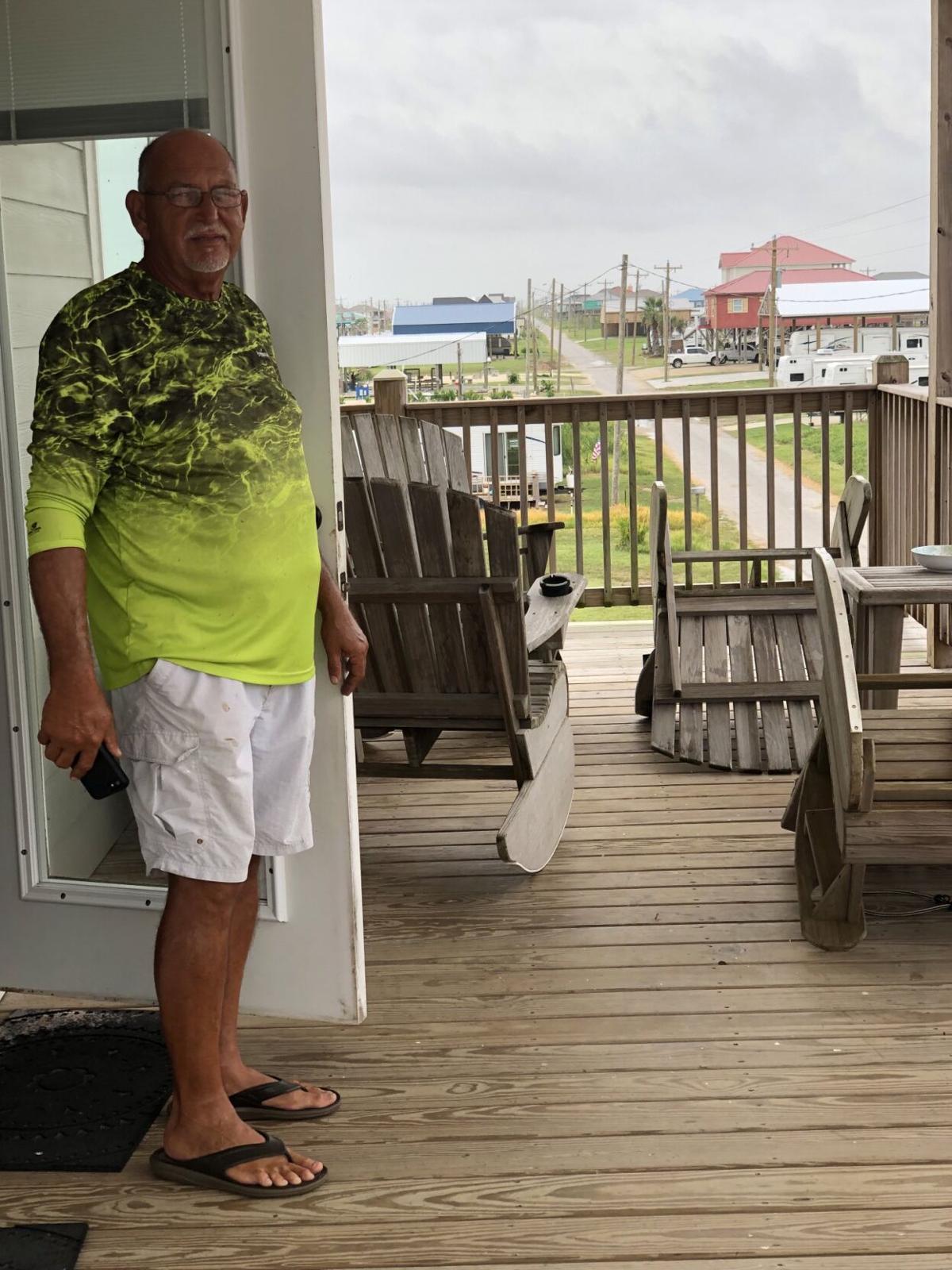 Mike Bott is keeping an eye on Tropical Storm Nicholas from his camp in the community of Holly Beach, but believes he should be able to ride it out.

Holly Beach had begun to see high winds and waves from Tropical Storm Nicholas on Monday.

Mike Bott is keeping an eye on Tropical Storm Nicholas from his camp in the community of Holly Beach, but believes he should be able to ride it out.

HOLLY BEACH – As he eyes yet another storm in the Gulf of Mexico from his house a block from the water, Mike Bott says the reason he still chooses to live here is simple.

“If you’d see my views in the morning, you’d know why,” said the 63-year-old, gesturing at his balcony overlooking the Gulf -- though it also affords a vista of dozens of empty lots in this storm-battered community in the so-called Cajun Riviera. “My sunsets, my sunrises – it’s gorgeous, man.”

UPDATE: Hurricane Nicholas forms in Gulf of Mexico before landfall in Texas

With Hurricane Nicholas threatening, disaster-weary residents of southwestern Louisiana find themselves once again taking precautions. While the storm is likely to make landfall further west in Texas – and at a far weaker strength than Hurricane Ida or last year’s Hurricane Laura – torrential rain and storm surge could still pose problems at a vulnerable time for the region.

Southwestern Louisiana is still rebuilding from a run of disasters that began in August 2020 with Laura, which devastated the region with 150 mph winds. It was followed by Hurricane Delta around six weeks later, a fierce winter storm in February and severe flooding in May, leaving many in the region rebuilding – and then rebuilding again.

It is the May flood that is perhaps most on the minds of Lake Charles residents. Record-breaking rains overwhelmed drainage systems in spots still blocked by debris from Laura, stranding residents and damaging hundreds of homes and businesses.

The flooding forced some who had just finished rebuilding their homes after the hurricanes to gut them again and start over, adding insult to injury in a year already made difficult by the pandemic.

In the Greinwich Terrace neighborhood of Lake Charles, which has flooded three times since 2017, wallboard and insulation still sit piled on the curbs in some areas and tarps from Laura can still be spotted on roofs. Already at a low spot, the neighborhood has become increasingly flood-prone due to the development of big-box stores and the adjacent Interstate 210.

Residents are now being offered buyouts to leave, with their homes to be left as open space. Some are eager to take it, but others, particularly older residents whose homes are paid for, prefer to stay.

On Monday, some had stacked sandbags made available by the parish in front of their doors. Moses Nelson, 72, said he might do so later in the day. His house took on about a foot of water in the May flood and he has been gradually rebuilding inside. He is steadfastly against a buyout, saying he’s too old to start over.

As he filled a large container with water to take to the cattle he raises nearby, he said he would just hope for the best.

Ahead of Tropical Storm Nicholas’ potential impacts, some schools in Acadiana are closing their doors and switching to remote learning on Tuesday.

Calcasieu Parish officials were monitoring the storm. Boats and high-water vehicles could also be deployed by the Sheriff’s Office if flooding occurs, as happened in May, when around 600 people were rescued. Schools in the parish were closed.

“Our whole parish is under the gun for this one,” Sheriff Tony Mancuso said at a briefing on the storm, mentioning the possibility of heavy rainfall. "We have to prepare for that.”

Down in Holly Beach, in Cameron Parish, permanent residents and those with weekend homes or campers wondered how much surge Nicholas would push ashore. The beach community resembles Grand Isle, with colorful camps high in the air – though far fewer than there once were.

It took a heavy hit from Hurricane Rita in 2005, then in subsequent storms, particularly Laura. The cost of rebuilding up to flood-prevention standards is high.

But for Colletta Lejeune, 58, and Guy Foreman, 57, it’s not too high. They said they were finally able to afford a lot in Holly Beach after spending time there for years, and they’re in the process of building a camp.

In the meantime, they brought a travel trailer down from their home in Judice in the Lafayette area. They were pulling up stakes and heading out ahead of Nicholas, taking their three dogs with them – a red heeler, a Labrador and a basset hound.

“I ain’t taking no chances,” said Foreman, whose rice and crawfish farm as well as his trucking company were damaged by recent storms. “I’ve had enough bad luck.”

Signaling toward the beach behind him, where the waves and wind were picking up, he said: “The water’s already right there.”

Frank Monceaux, 70, wasn’t ready to leave yet, but he was keeping an eye out. He said his heavy 40-foot trailer should survive a low storm surge, but he was considering whether to take it to an RV park further north in Carlyss, where he stored it for Laura, if the forecast worsens.

“I’m going to stick it out for today and see,” said Monceaux.

Bott and his wife JoElla, 52, were watching The Weather Channel and planning to stick around. JoElla was baking bread and joked about having vodka and Bloody Mary mix on hand. Mike was clearing out everything underneath the camp to make sure it didn’t float away.

Their sturdily built camp, which they use as their permanent house, survived Laura, though it suffered damage from wind, a lightning strike and storm surge. A flood line at close to 5 feet high -- amounting to around 11 feet above sea level -- can still be seen on the inside of the door for the elevator that takes them up to the house, whose floor is 23 feet above sea level.

When they made it back after Laura, they said they turned their house into a mini relief station for residents and workers, distributing donated supplies. But when they’re not battling storms, they live something akin to an island life, fishing, crabbing, duck hunting and relaxing. The camp bears the name “Bott Time,” and Mardi Gras beads hang from the crab-shaped mailbox.

“We’re good for up to seven, eight,” Mike said, referring to feet of storm surge. “If they top over eight, we’re out of here.”

Gov. John Bel Edwards urged Louisiana residents Monday to take the threat of Hurricane Nicholas seriously, warning that it could cause life-th…

Southwest Louisiana has begged and pleaded for federal disaster relief since Hurricane Laura tore through the region more than a year ago. It …

Rain from Tropical Storm Nicholas was expected to continue sweeping across Acadiana and southern Louisiana overnight Tuesday and through Wednesday.