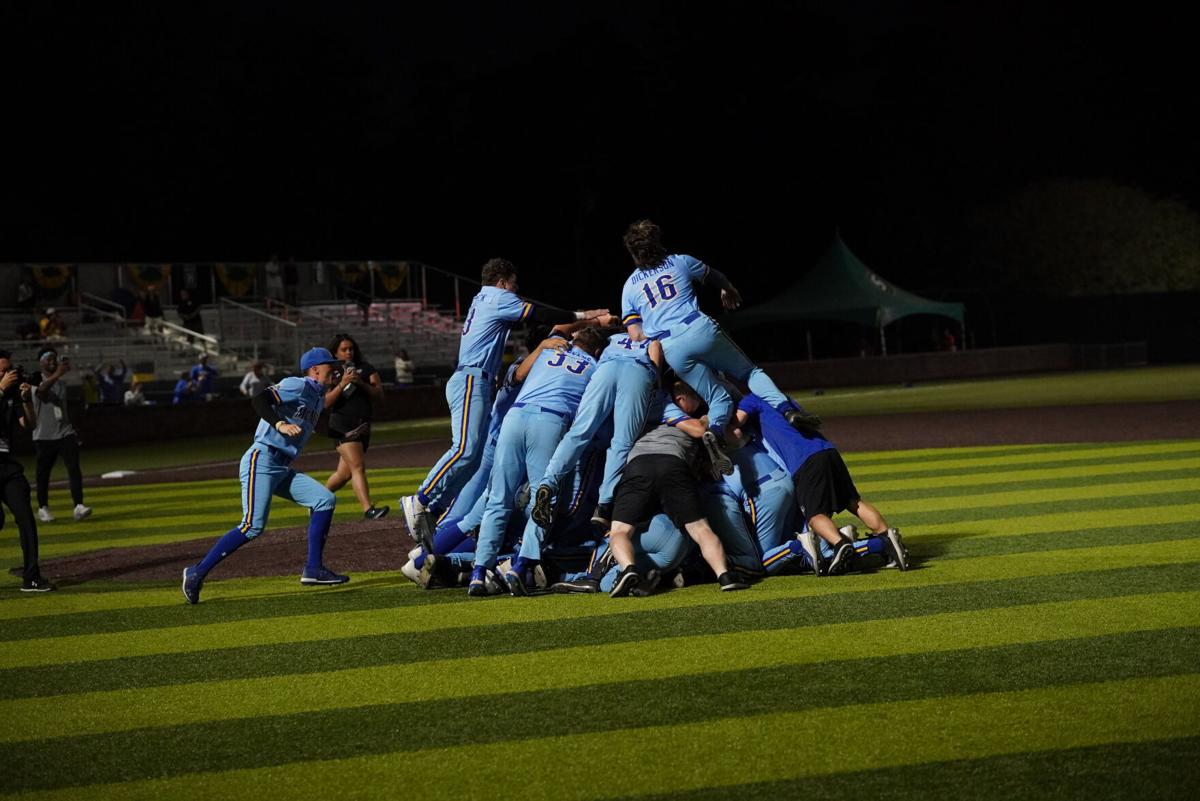 McNeese State players celebrate on the infield after the final out of the Southland Conference tournament championship game against Sam Houston State, Saturday, May 29, 2021 at SLU's Alumni Field in Hammond. 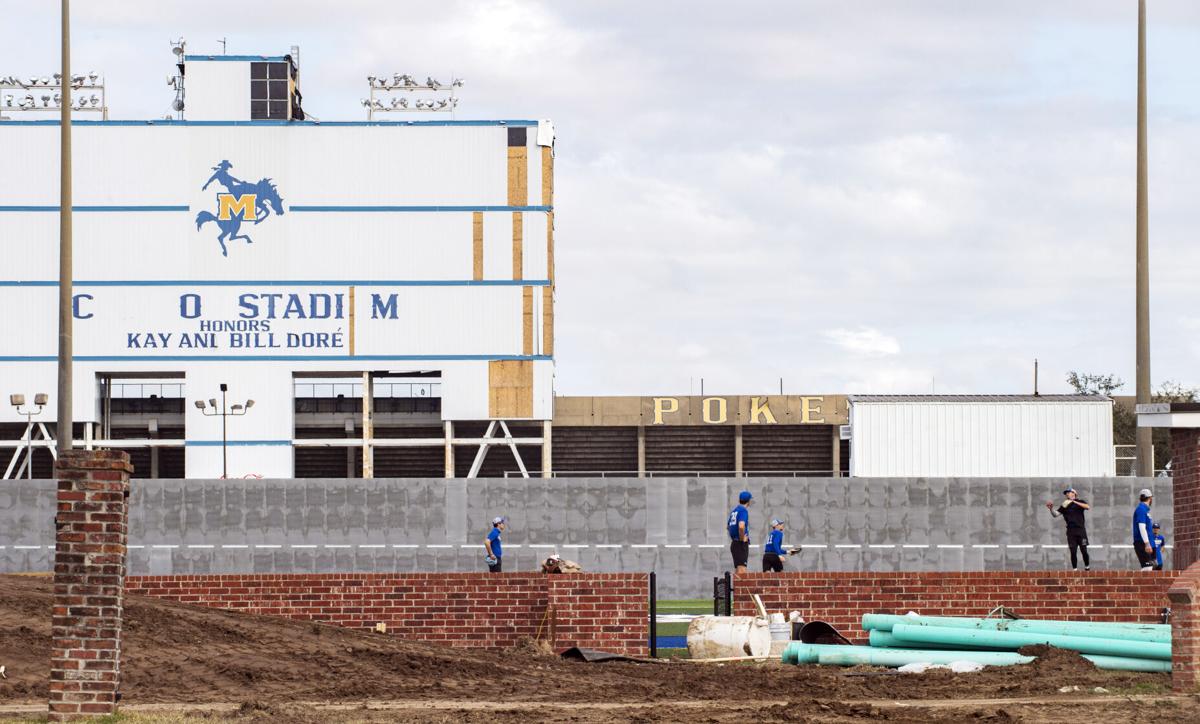 McNeese State players celebrate on the infield after the final out of the Southland Conference tournament championship game against Sam Houston State, Saturday, May 29, 2021 at SLU's Alumni Field in Hammond.

LAKE CHARLES -- The first thing you might want to know about McNeese State’s baseball season is that head coach Justin Hill, like so many people in southwest Louisiana, is still repairing his hurricane-damaged house.

Nevertheless, his Cowboys are headed to the NCAA tournament Friday after a scrappy season that saw them overcome a laundry list of challenges inflicted by the storms that hit the region last year, including the loss of their locker room and a period when they had to practice at high school fields.

“If we can give somebody a little bit of either relief from what they’ve got going on or a little bit of a distraction -- if we can give them a little bit of hope, that’s worth it,” Hill, a former LSU pitcher, said this week. Behind him, the Cowboys were taking the field for practice ahead of Friday’s game against Texas Christian in Fort Worth, the storm-battered letters atop the scoreboard that formerly spelled McNeese forming a backdrop.

“I feel like we have an opportunity to be a little bit of a representative to a lot of people.”

The team’s comeback qualification for the tournament has been a bright spot in the midst of a difficult recovery, which includes an estimated $200 million in damage to the McNeese campus and, as of now, a 10% drop in enrollment for the fall.

But despite that, school leaders hope an accelerated rebuilding could position McNeese well for the future, and a walk around the campus’s quad with its oak-lined walkways and blonde brick buildings shows that a plan to have it fully functional for in-person learning in the fall has begun taking shape.

'We had nothing:' McNeese State overcomes odds to win Southland Conference baseball title

HAMMOND — The day after Hurricane Laura ravaged southwest Louisiana, decimating thousands of homes and businesses in and around Lake Charles i…

It’s a stark difference from late August, when Hurricane Laura’s 150-mph winds tore off roofs and ripped up trees on the campus in southern Lake Charles. Around six weeks later, Hurricane Delta brought more damage, while last month more than 20 campus buildings took on varying amounts of water when the region was hit by severe flooding, including the baseball team’s already damaged locker room.

That’s not to mention the pandemic and a harsh winter storm in February.

Some heavily damaged university buildings will have to be razed, and certain departments will be required to squeeze together, but the school is forging ahead. University President Daryl Burckel acknowledged that progress on campus sharply contrasts with some nearby areas that remain devastated, but said he hopes McNeese can serve as a beacon, noting its importance to the region.

“We hope for our students that when they step on campus they can see what normal looks like again, and they can know that the community’s going to catch up,” said Burckel, whose personal home was also heavily damaged and who has been living in the university’s president’s house, though it was also hit. “The rest of the community will get there.”

As for the baseball team’s success, Burckel said it can provide a dose of inspiration.

LAKE CHARLES – By the time Clara Gaines made it back home, the nearly waist-high water outside was already flooding her house. Shoes and toys …

“I think it just shows folks in our community what can be accomplished with a lot of hard work, perseverance, resiliency, and that you don’t give up,” he said. “That you can still achieve, you can still succeed, regardless of the circumstances we found ourselves in and the hardships that we faced. You can face them and overcome those.”

He, Burckel and other university officials as well as campus police had positioned themselves on the second floor of three-story Farrar Hall, which usually houses McNeese’s college of education, as Laura approached, with the idea that they would be in place to immediately assess the situation. By around 2 a.m., the winds were tearing off the roof.

“It was a rumbling, almost like thunder, but just ongoing because it was just peeling back and rolling off,” Rhoden said. “And the next morning you could see it. It was just laying everywhere in that quadrangle, along with every roof that got damaged.”

That building is among nine still to be demolished. When he and the others emerged after the storm passed, they found what looked like a world that had been picked up and tossed around. Roads were impassable, blocked by downed limbs and other debris.

“When we walked out that morning when it was light, it was almost the reverse of ‘The Wizard of Oz,’” said the 60-year-old Rhoden. “Instead of being colorful, it was just gray, because all of the leaves were stripped off the trees in the quad … It was just very gray-looking, so it was a very surreal moment for everybody when we walked out.”

Just about all of the university’s roughly 137 buildings were hit with some kind of damage, he said. The agricultural college’s farm complex, which includes a meat-processing facility among a range of other structures, likely took the worst of it, said Rhoden.

CAMERON — Lerlene Rodrigue mourned the death of her father 30 years ago. Now she might have to bury him again — if she can find him.

Around half of the estimated $200 million in university-wide damage has been contracted for repairs or rebuilding, he said, using a combination of state, insurance and FEMA money. Based on the university’s previous experience in coming back from 2005’s Hurricane Rita, Rhoden estimates a full recovery will take three to five years.

The school is hoping later registrations will restore some of the drop in enrollment it is currently seeing, down 10% from the roughly 7,000 students it had last year, though Burckel said major changes between then and now appear unlikely.

The university’s damage in many ways mirrored the rest of the region’s, but recovery is likely to take significantly longer in other parts of Lake Charles and southwest Louisiana. Nine months after Laura, the most powerful hurricane to hit Louisiana since 1856, local officials are still seeking supplemental federal relief and homeowners continue to haggle with their insurers.

With that in mind, the Lake Charles area has had plenty besides baseball to worry about, though some have certainly taken heart in watching McNeese right itself after a shaky start to eventually win the Southland conference tournament in Hammond on May 29.

At Darrell’s restaurant and bar down the road from the McNeese campus, where fans gather before and after Cowboys games, bartender Ryan O’Neill said the baseball team’s journey “definitely brings some pride around here.”

“I think it’s awesome,” said O’Neill, 39, who sometimes streams games on his phone and mirrors them onto the bar’s television. “Those guys have been through a lot … It kind of gives you a break from everything, to forget about whatever, and you’re like, ‘Hey, these kids are fighting.’”

Darrell’s is struggling in its own way. While it did not suffer major hurricane damage, it has experienced staffing shortages, with its usual 75 employees down to 30 and its hours shortened, said general manager Tyler Benoit.

The storms seemed to invest the season with a larger purpose. The same was true for the school’s softball program, which also qualified for the NCAA tournament but did not make it out of the regionals.

“There’s people that need this. They need our city to be doing things like this so they can have something to look forward to and get behind,” Gonzales, 22, a pre-med student, said ahead of Tuesday’s practice. “It kind of unifies the city in a way, and I think that’s been pretty cool.”

Hill, a 41-year-old West Monroe native who’s coached McNeese since 2014, now considers the area home along with his wife and two daughters. He also feels the season has taken on a larger meaning and wants it to be kept in perspective.

He hopes the team’s success will help bring attention to the region’s struggles.

“We’re not just out seeking attention just for the sake of attention … We want help the way that help has been given in the past when it comes to natural disasters,” he said.

Rabalais: Why LSU might be the best version of itself entering NCAA tournament play

For the moment at least, all the sentiment surrounding LSU coach Paul Mainieri’s imminent retirement has been swept up, bottled, corked and to…