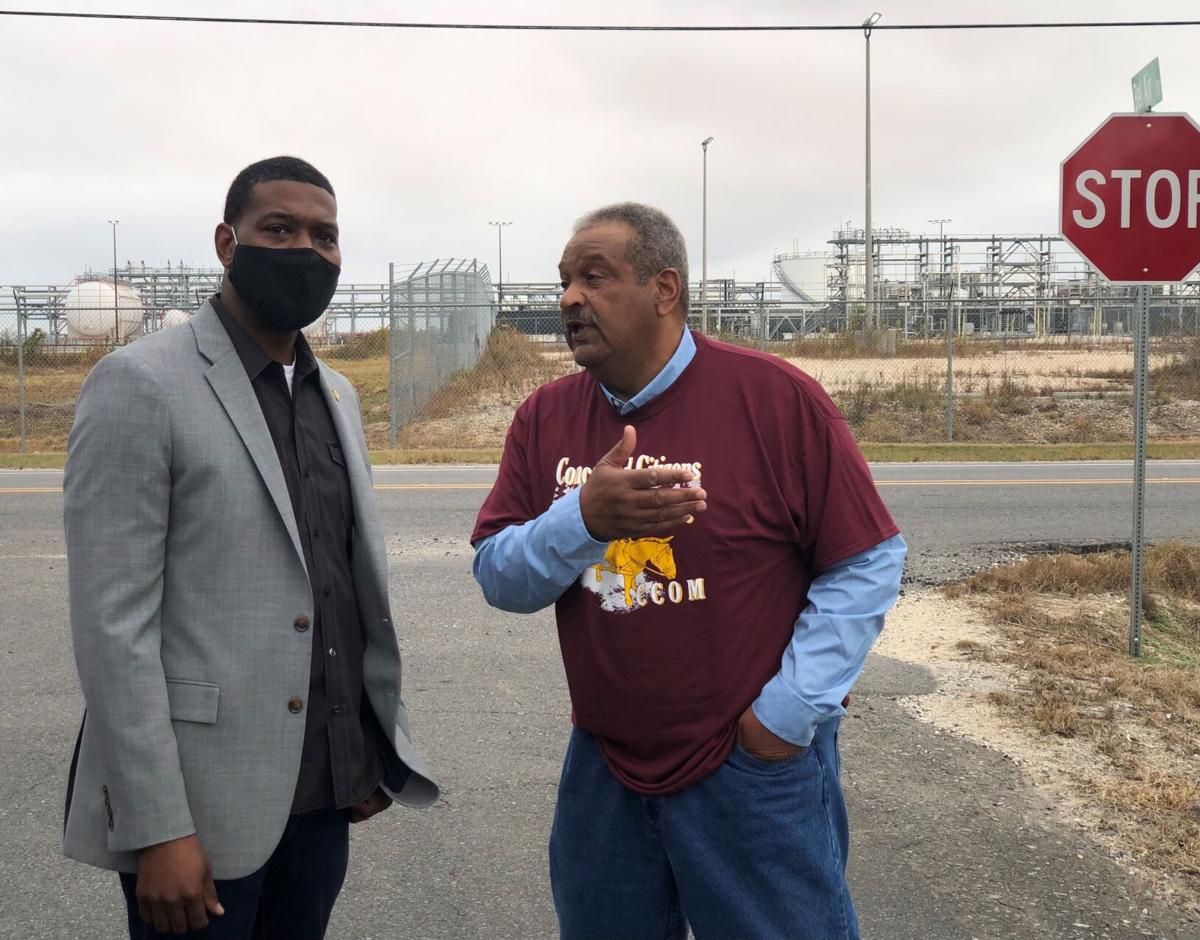 EPA Administrator Michael Regan speaks with Mossville resident Karl Prater during a visit to the community on Thursday, November 18, 2021. Regan visited Mossville as part of a tour intended to highlight environmental justice issues. 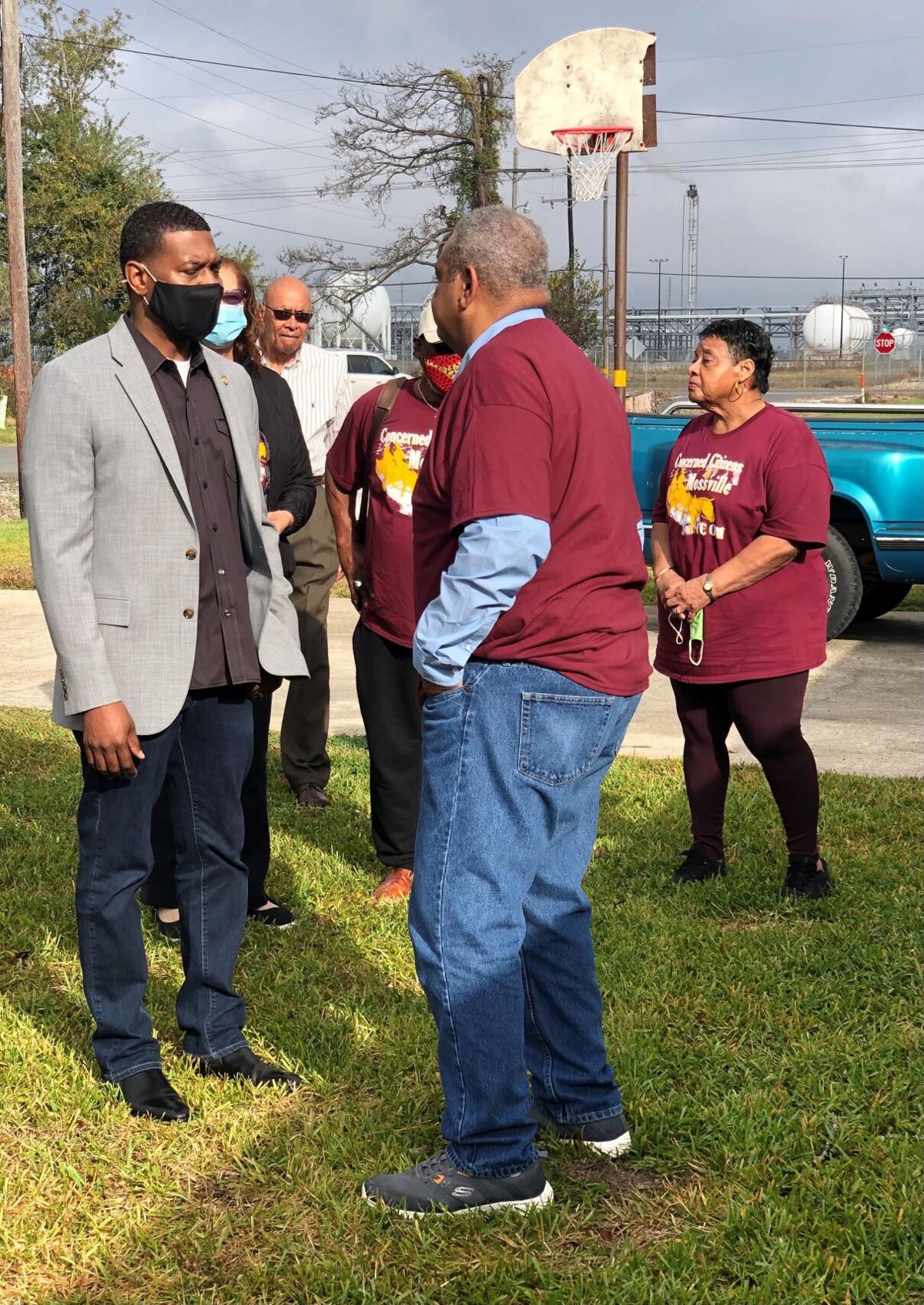 EPA Administrator Michael Regan speaks with Mossville residents during a visit to the community on Thursday, November 18, 2021. The visit was part of a tour to highlight environmental justice issues. 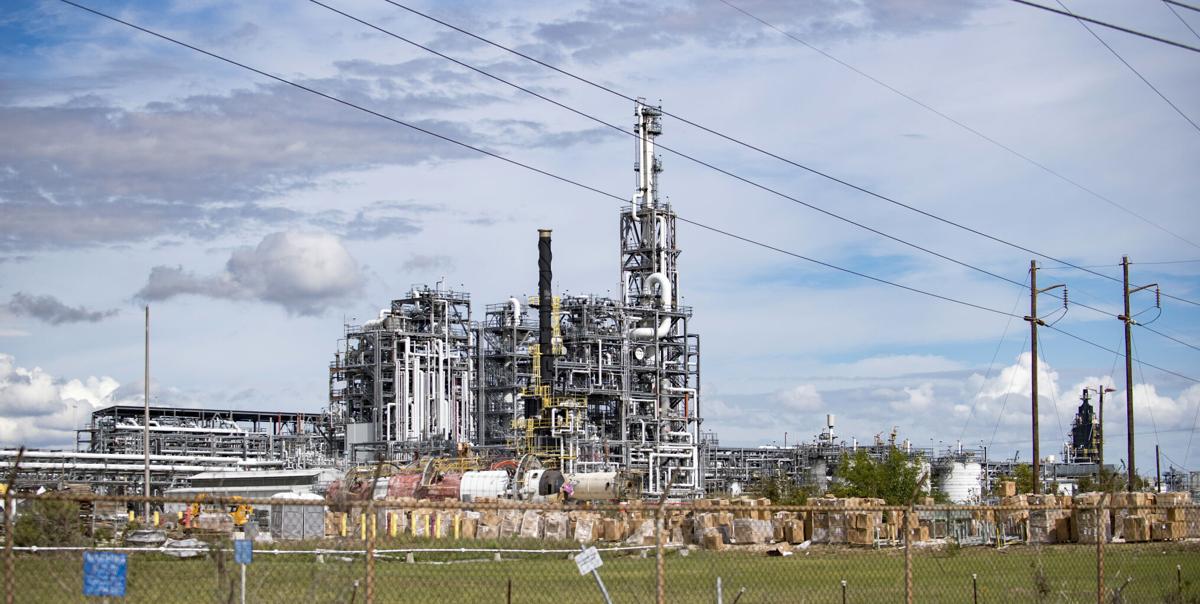 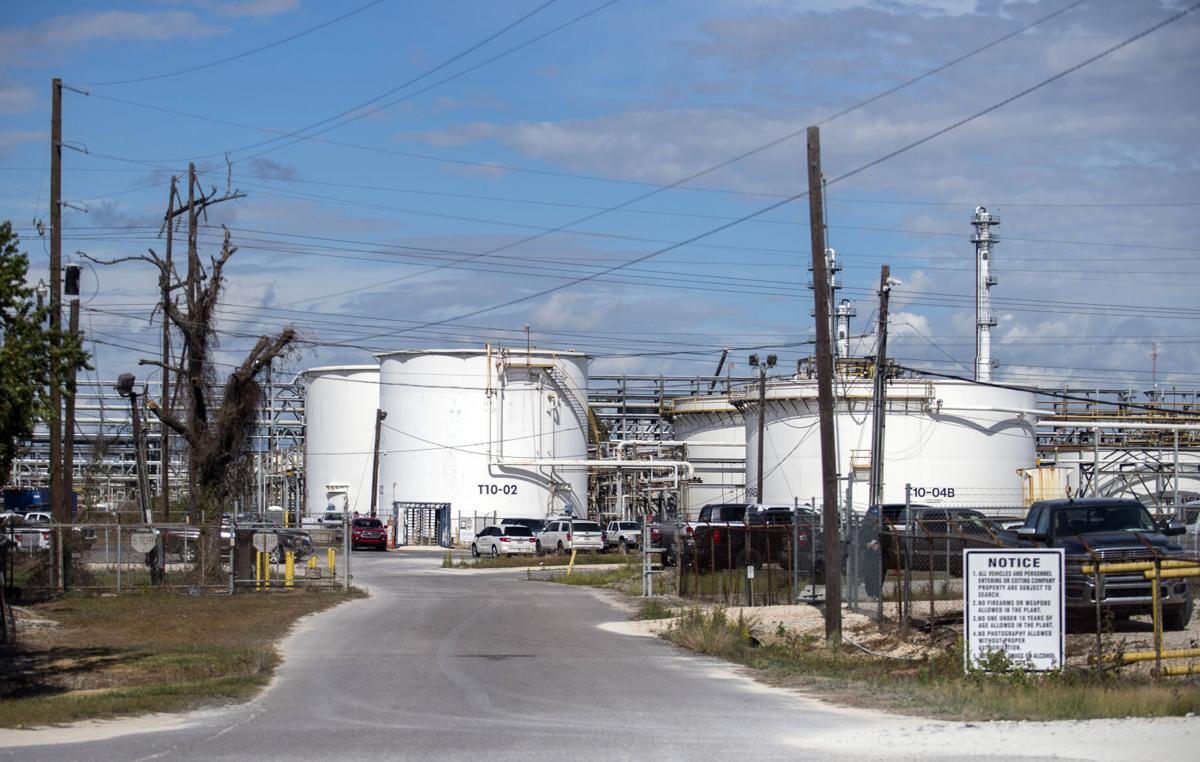 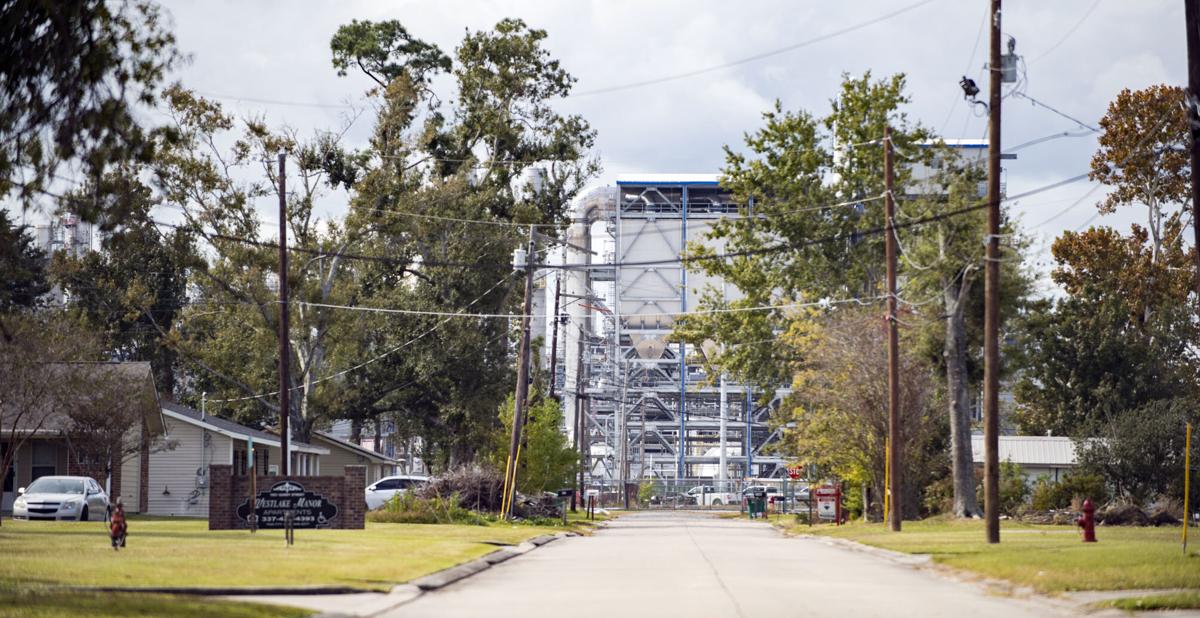 EPA Administrator Michael Regan speaks with Mossville resident Karl Prater during a visit to the community on Thursday, November 18, 2021. Regan visited Mossville as part of a tour intended to highlight environmental justice issues.

EPA Administrator Michael Regan speaks with Mossville residents during a visit to the community on Thursday, November 18, 2021. The visit was part of a tour to highlight environmental justice issues.

Michael Regan, the first Black man to lead the U.S. Environmental Protection Agency, visited the community outside Lake Charles, which was founded by freed slaves in the 1790s, as part of a wider tour intended to shine a light on environmental justice issues. He also held discussions with residents and activists, and said he intended to speak with the companies located in the area and state officials.

Mossville is on the verge of disappearing after the South African firm Sasol offered residents a voluntary buyout that accompanied a chemical plant expansion. Some residents and activists call the terms of the buyout unjust, adding that decades of pollution from the dozen or so nearby plants has led to health problems.

“I can tell you, being on the ground here, seeing it for myself, talking with the community members, it’s just startling that we got to this point,” Regan said near the fence of the Sasol chemical complex after viewing an air monitoring unit that residents and activists say is inadequate.

“And the question really is at this point, for all of us as federal, state and local government officials: What are we going to do moving forward? We can examine how we got here and I think we should, but there needs to be a sense of urgency around a solution for how we move forward, and that’s what I want to put in motion.”

He added: “It's our responsibility to protect every person in this country, no matter the color of their skin, how much money they have in their pocket or their ZIP code.”

MOSSVILLE — Ronald Carrier says he isn’t going anywhere unless he is given what he sees as a fair deal. As his community vanishes around him, …

Some residents said they were encouraged by the visit and hoped Regan could take action that would allow them to be compensated better to leave their homes. Residents who remain often say they were not offered enough money to uproot their lives and homes and find a similar home elsewhere.

For activists, Mossville has become a case study in environmental justice, an egregious example of how polluting plants have long tended to be placed in Black and poor neighborhoods. Companies in the area like Sasol say they comply with emissions regulations while touting their economic impact and charitable contributions.

Sasol calls its voluntary buyout “the most generous of its kind ever executed” and stresses no one was forced to leave. It adds that Mossville residents approached the company for the possibility of a buyout and the company agreed to one though those properties were outside what was needed for the expansion. There are certainly residents who were happy with it and have found homes elsewhere, though others who rejected offers say it wasn’t nearly enough to make them whole.

Karl Prater, 70, is in the latter group, though he said he was part of an earlier process that allowed him to negotiate his price. Regan visited his home across from the Sasol complex on Thursday, asking him about the buyout process.

Prater says he was offered the same amount for his four-bedroom, 2,200-square-foot home on three-quarters of an acre as his neighbor, whose house was roughly half the size. The offer was $350,000 after he rejected an earlier one of $250,000.

He built his house in 1978 and raised his three children there. He called the area “a good community. Everybody knew everybody.”

“With the prices of houses going up right now, you can’t,” he said of the offer. “And I’m 70 years old and having to start over again. How are you going to do that?”

A new analysis released on Wednesday alleged sizable disparities in the prices paid for properties in Mossville compared to those in nearby White areas that were also bought out by Sasol. The University Network for Human Rights, the nonprofit advocacy group that conducted the study, says its data “strongly suggest that the (voluntary buyout) was racially discriminatory.”

U.S. Rep. Troy Carter has asked the Biden administration for third-party monitoring of air emissions in the Mississippi River corridor between…

It contends that “property transaction amounts were, on average, about 88% higher” in the mainly White Brentwood area, which was also part of the voluntary buyout, than in Mossville.

Report co-author Ruhan Nagra said the study was not able to take into account factors that could affect a home’s value, such as size of the house or its condition, and noted that one transaction may include several structures. She said, however, that since the aim of the program was to relocate families elsewhere, “people have to be compensated enough money to be able to do that.” She said that Prater's offer would have been higher since it preceded the voluntary program based on formulas.

"Under no circumstances were property owner demographics taken into account when determining property value, appraisals and/or offers," it said.

It also noted the difference between areas involved in the voluntary buyout and those where the company required properties for its expansion. Those in the latter category were able to negotiate prices for that reason, it said.

Sasol says the community was consulted and the formula for the buyout was communicated, based on independently appraised value using nearby comparisons with a $100,000 minimum for owner-occupied homes plus 40-60% bonuses.

The company says the voluntary buyout saw 85% of those eligible request appraisals, resulting in 779 purchase offers. Around three-quarters of those had been accepted as of July 2020.

“We are proud of our engagement with our neighbors and have consistently worked with Mossville residents to keep them informed of our plans and solicit their input on how we can make a positive difference in their community,” the company said.

It has also financed a Mossville oral history project through a grant.

Regan’s visit was part of a week-long tour through Mississippi, Louisiana and Texas to draw attention to environmental justice issues. He planned to be in Houston on Friday.

“Our goal is to ensure that every single community in this country is adequately and equally protected,” he said after meeting with Mossville residents at the community’s Mount Zion Baptist Church, which was founded in 1866. “So as we visit these communities, we're highlighting that this is a real situation. Real people are facing real challenges and the government has to step it up and do a better job.”