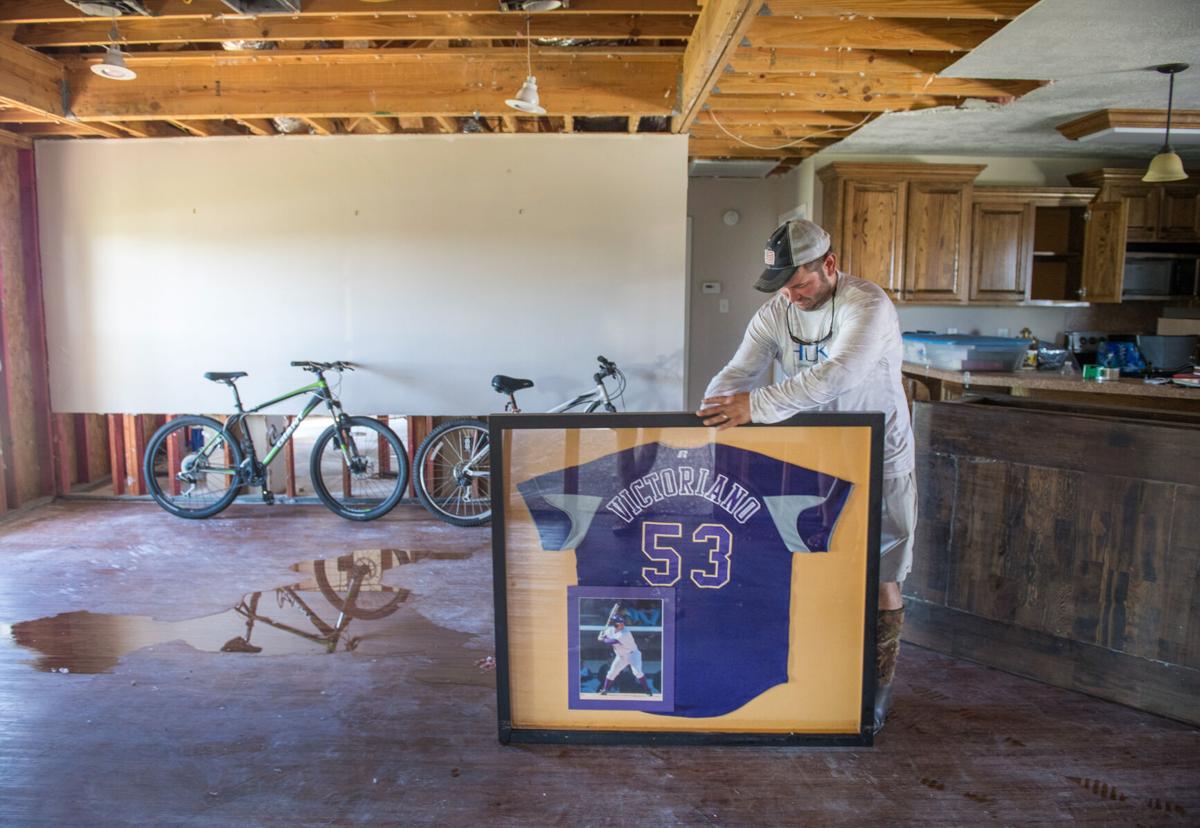 A former baseball player with LSU, Gerard Victoriano, Jr., salvages his old jersey on Oct. 11, the morning after Hurricane Delta passed over his house southeast of Lake Charles. His house was originally destroyed by Hurricane Laura. Rain and flood water from Hurricane Delta can still be seen on the floor of his gutted living room. 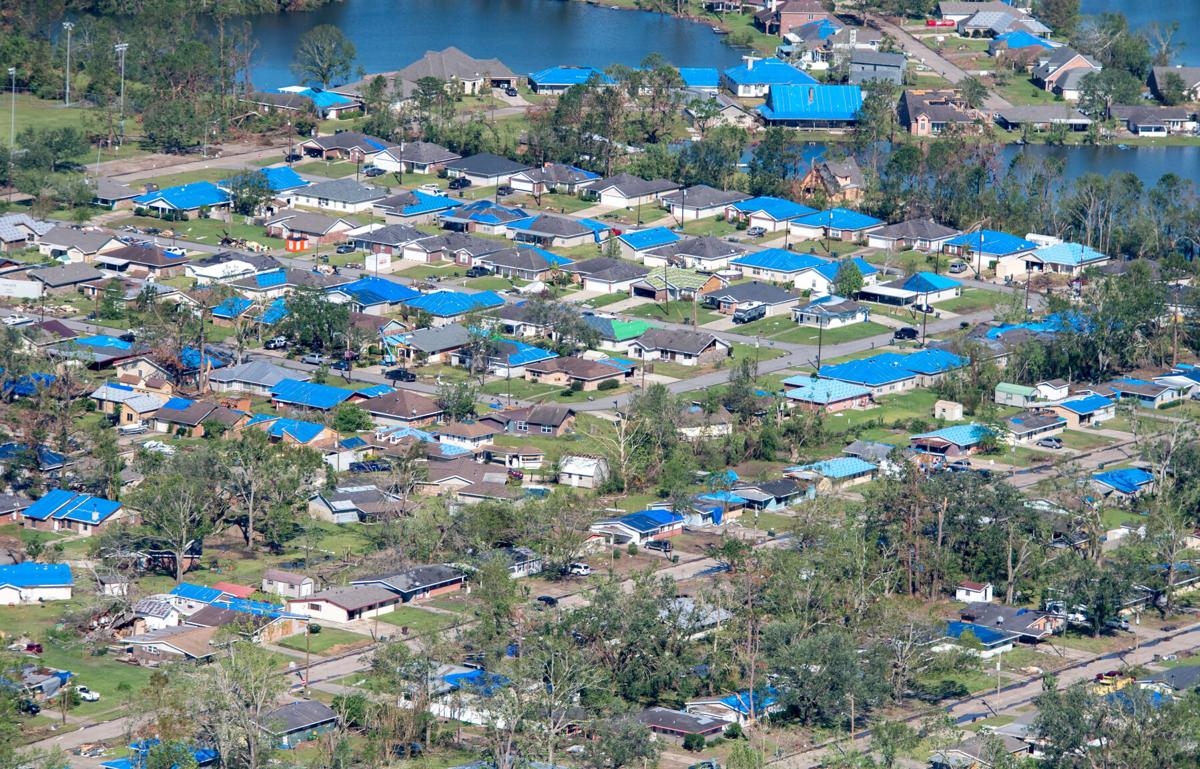 Blue tarps abound in the aftermath of Hurricane Delta in this photo, shot Oct. 10 in Lake Charles. 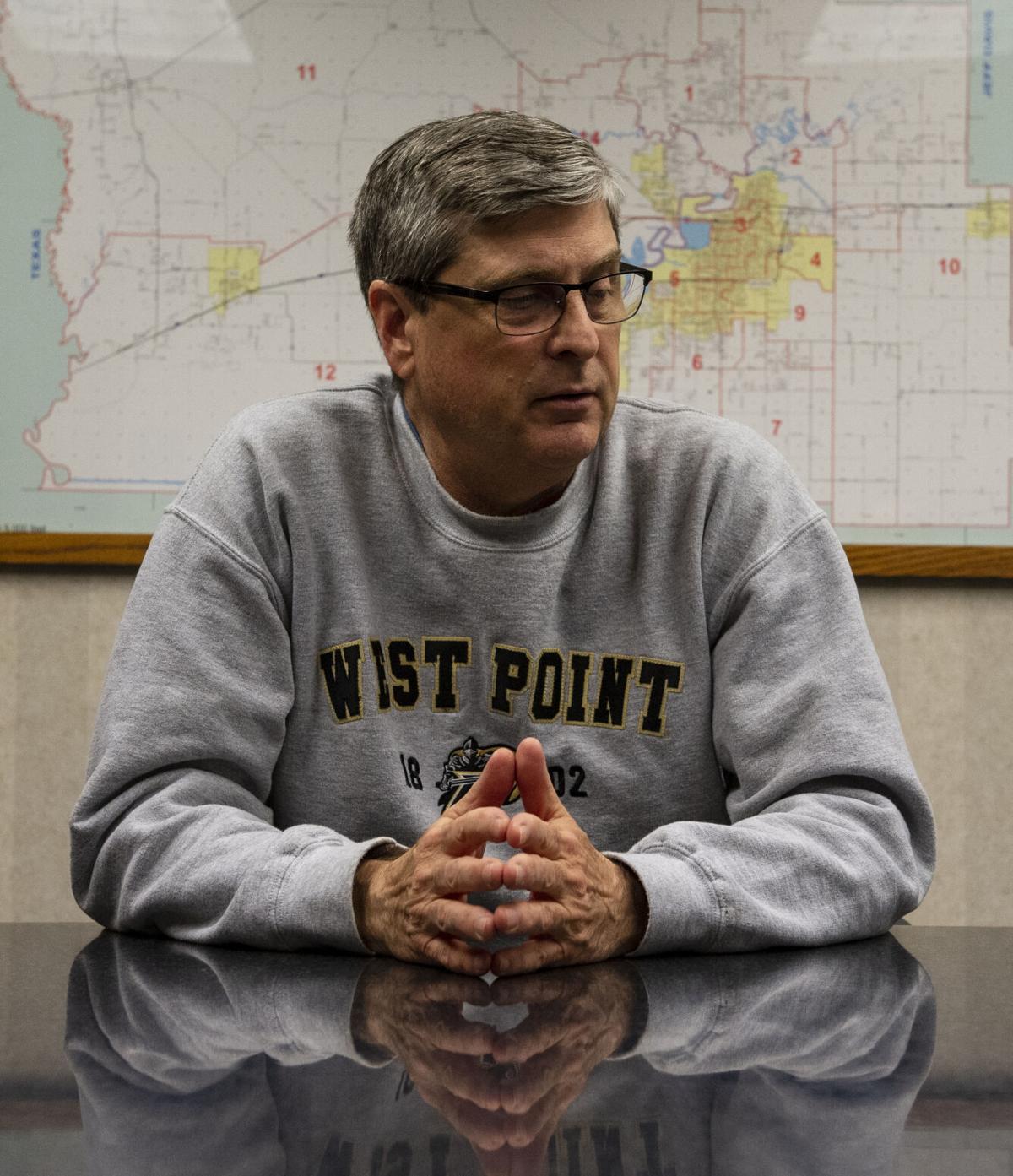 Bryan Beam, Calcasieu Parish Administrator, talks on Feb. 18 about the challenges still facing southwest Louisiana in the aftermath of two devastating hurricanes and a vicious cold snap that burst pipes across the region. 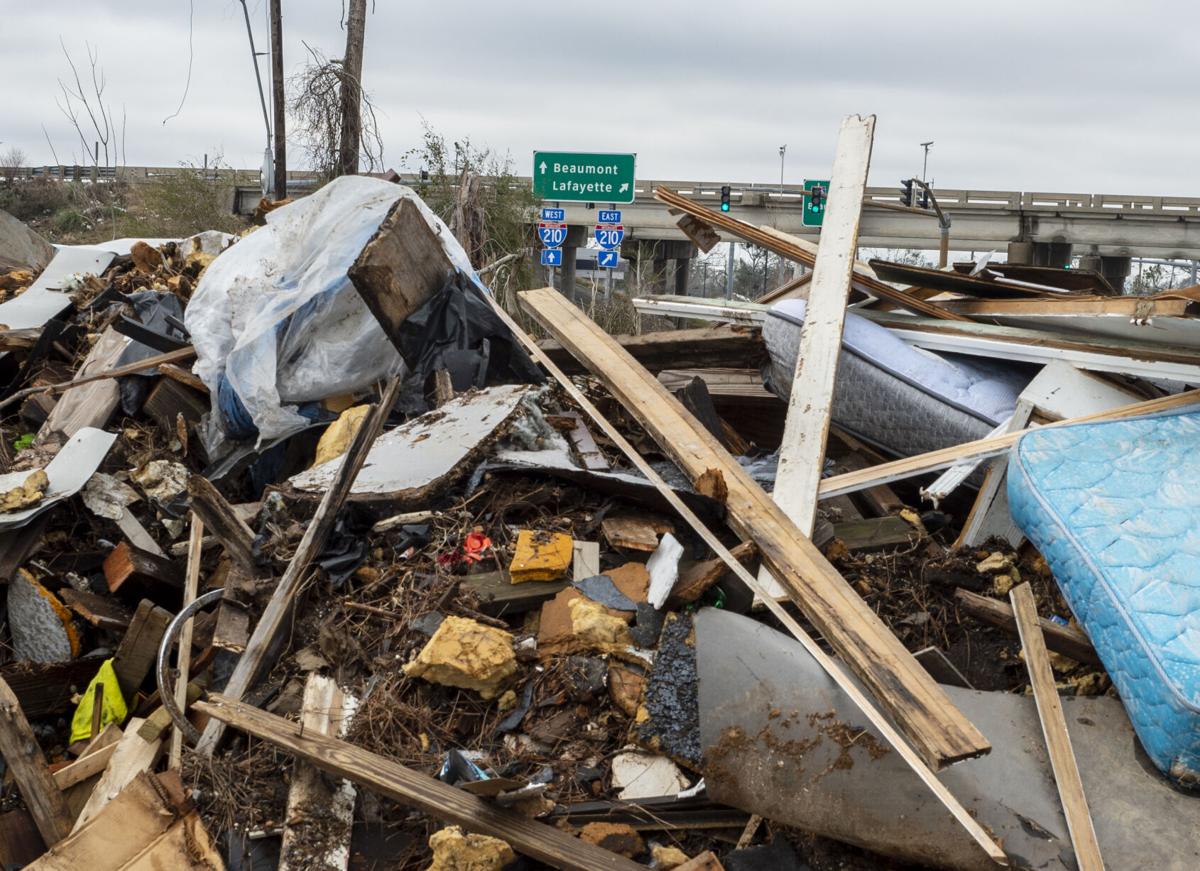 Piles of debris lined the streets of Lake Charles on Feb. 18. 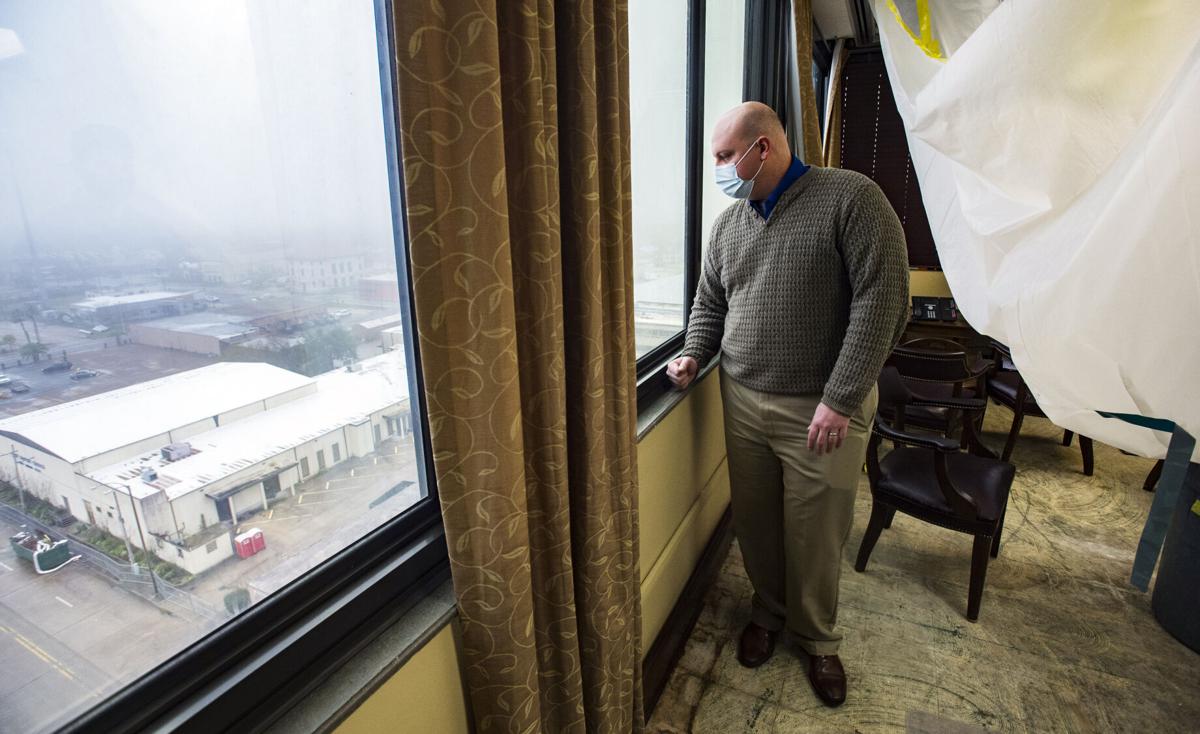 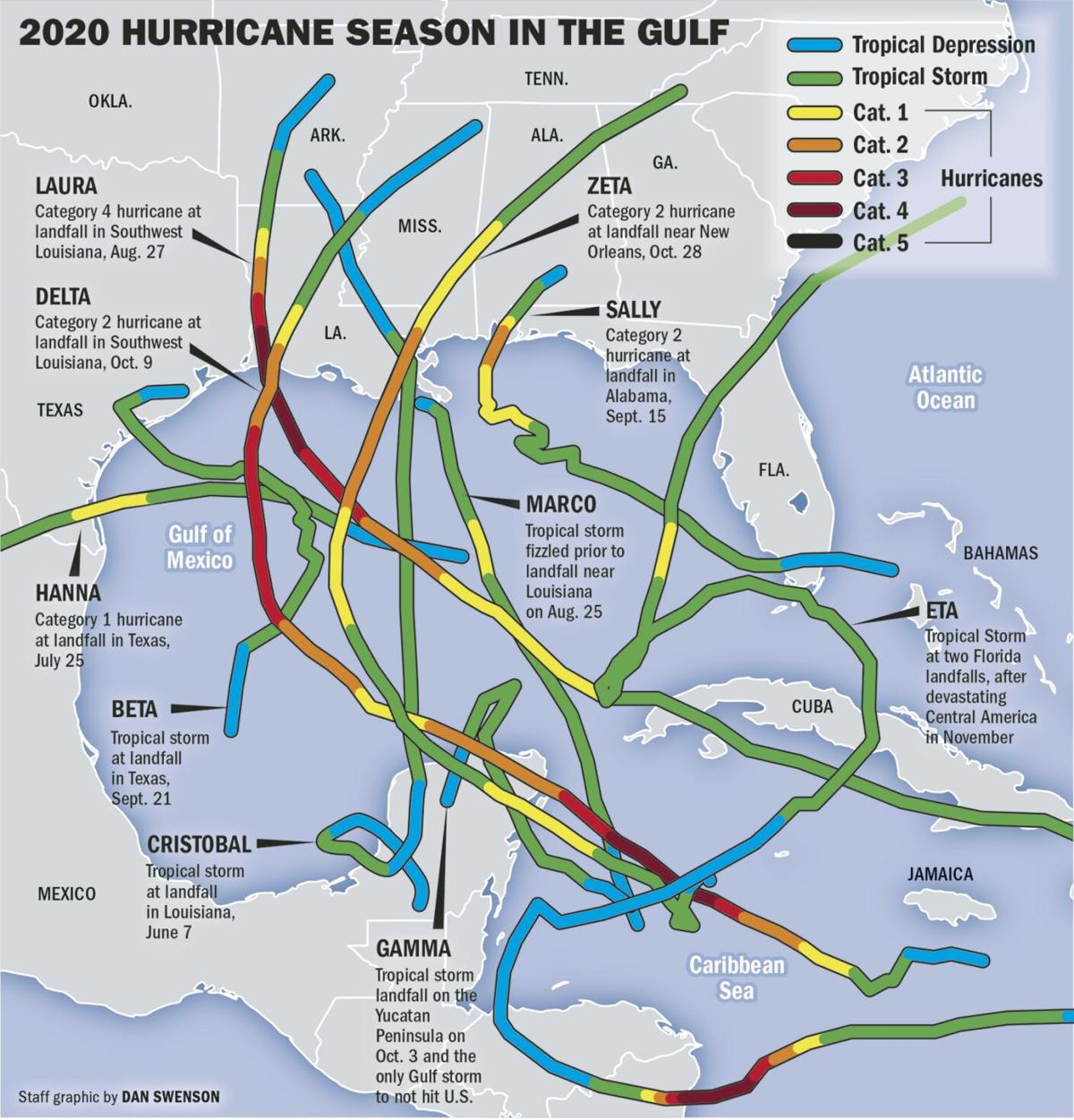 LAKE CHARLES — Standing near the empty lot where his house once stood, Ron Thomas said his message for President Joe Biden when he arrives for a visit on Thursday is a simple one: Send help.

“Why is Calcasieu Parish not receiving the assistance they’re supposed to receive — the assistance they’re supposed to receive after a storm?” the 50-year-old said, casting a gaze over his former neighborhood in northern Lake Charles, where modest homes of brick and wooden siding in the shadow of Interstate 10 took a beating in the two hurricanes that ripped through southwestern Louisiana last year.

It’s a message being echoed throughout the area, from the region’s top officials to the streets of Lake Charles, Louisiana’s fifth-largest city.

The region has made much progress in coming back from Hurricane Laura, one of the most powerful storms to ever make landfall in the U.S., and Category 2 Hurricane Delta just six weeks later. But daunting needs remain, and rebuilding in the COVID era has posed its own set of challenges.

President Joe Biden is coming to New Orleans and Lake Charles on Thursday to promote his plan to rebuild the nation’s bridges, highways, ports…

For every sign of recovery — the lunchtime buzz of a downtown po-boy shop, volunteers sanding and nailing so families can return home, the whirr and jingle of slot machines inside cavernous Lake Charles casinos, petrochemical plants back at work — there are grim reminders to match.

The city’s 22-story Capital One tower overlooking the water is shut and fenced off, so many of its teal windows blown out that the tan plywood covering them forms a pattern not unlike a giant, macabre game of Tetris.

Blue tarps covering roofs remain a common sight, and in some areas dozens of damaged or collapsed houses sit fallow. Residents talk about the difficulty in dealing with insurance companies to receive needed reimbursements.

But perhaps most important is an aspect of recovery that is less immediately visible.

More than eight months after Laura, the city of Lake Charles estimates some 3,000 people remain displaced, about 4% of all residents. For all of Calcasieu Parish, that number rises to around 4,000.

Population estimates in a recent analysis published by The New York Times are even grimmer. Those found that Lake Charles lost some 6.7% of its population last year — the highest rate in the nation.

Local officials say the population loss was expected considering what the region endured, and they believe many of those people have since returned, though it’s too early for precise figures.

What is needed now, they say, is a long overdue disaster relief package from the federal government. Lake Charles Mayor Nic Hunter said the city has more than $230 million in housing needs alone, and an analysis commissioned by the Community Foundation of Southwest Louisiana found that around half of all housing in Calcasieu was damaged in some way.

There are widespread expectations locally that Biden’s visit will focus on his $2 trillion infrastructure plan, which could include a replacement for the city’s hulking I-10 bridge over the Calcasieu River, completed way back in 1952.

Local officials certainly support building a new bridge, but they hope it doesn’t keep other pressing concerns from being addressed.

Burned to the ground after Hurricane Laura, a chemical plant wants millions in tax breaks to rebuild

“It would be just a grave miscalculation if the president came to town and did not address hurricane recovery and the fact that we are now close to 250 days post-Hurricane Laura and we still do not have a disaster relief package approved from Washington, D.C. for southwest Louisiana,” Hunter said. “I consider that a grave injustice.”

Calcasieu Parish Administrator Bryan Beam made the same point, saying that additional money is needed to allow people to move back into their homes. He says the initial response from the federal government was effective, but longer-term recovery funds must now be addressed.

Allowing more people to return will also help with related challenges for the region, such as a “drastically reduced” labor market, he said.

“The primary thing that we’re asking if we get a chance to communicate with the president is just a very strong emphasis on how hard we have been impacted even now,” Beam said. “It’s a long recovery because this is such a big hurricane followed by another hurricane that has done more damage than we’ve ever seen.”

Laura roared onto the Louisiana coast on Aug. 27 as a Category 4 storm, with winds of up to 150 mph and storm surge of over 15 feet — the strongest storm to hit the state since 1856, according to the National Oceanic and Atmospheric Administration.

It laid waste to much of Calcasieu Parish, as well as Cameron Parish, further south along the coast.

Hurricane Delta followed on Oct. 9 as a Category 2 storm, adding to the misery and in some cases complicating rebuilding that had already begun. It took a path eerily close to Laura.

Jerry George, 67, returned home after evacuating to Austin for Laura to find a couple of the iron columns on his porch blown over, though his house thankfully didn’t collapse.

Downed trees blocked the streets. The house across the street where his 94-year-old mother was living was too damaged for her to reoccupy.

He’s managed to repair much of his house even though it meant he and his wife surviving without electricity for 19 days after his return. But before he could finish ceiling repairs, Delta came through.

“The second storm is the one that did it,” said the retired father of two, who formerly worked in purchasing at a hospital. “When we had to leave — evacuate and went to Houston — all my ceiling tiles had to come down.”

He’s still haggling with his insurance company over the ceiling repairs.

“They give you what they want you to have,” he said. “They want me to patch instead of changing. Who in the hell wants to walk through your house and you’ve got a patched-up ceiling?”

The yellow house is now in relatively good shape, though a few repairs are still needed. Flowers bloom on the edge of the porch next to a wooden cross with “All is Well” stenciled in black across it.

George has managed to avoid the fate of the thousands living in temporary housing, with FEMA delivering a combination of travel trailers and mobile homes.

The agency has supplied over 1,800 households with a unit, while roughly 600 households are still waiting. The delay is mainly due to complications in installing the units in a way that meets federal specifications, said FEMA spokesman Gerard Hammink.

Eighty-seven households have moved out of their trailers after finding permanent housing.

FEMA has prioritized putting the units on private property, but the sites must be prepared with adequate electricity and water, among a host of other requirements.

“It’s taking longer than anyone would like, but there’s just been various difficulties and challenges, and so we’re just really working to get most — I would even say 90% of the people on the list — into units by the end of the month,” Hammink said.

'Get this town back going'

In Lake Charles’s small but historic downtown, much of which had to be rebuilt after a catastrophic 1910 fire, a sizable lunch crowd gathered at Buffi’s Peaux Boys earlier this week.

Allen Lopez, 37, who was eating with his wife Christine, said his home in nearby Jefferson Davis Parish survived, though the general contracting company where he works in downtown Lake Charles was hit hard. He also said the federal government should do more, particularly considering the trouble many are experiencing with insurance companies.

“We need more federal aid around here when stuff like that happens,” said Lopez. “It needs to go to the people to rebuild these towns — get this town back going … Some of these businesses were already hurting from COVID, and then all this happened.”

For Thomas, the man from northern Lake Charles whose house was completely destroyed — which he learned through a Facebook message from a friend — the journey has been a long one, and included a stint of living out of his car.

He has qualified to have his home rebuilt by the Samaritan’s Purse charity, he said, but in the meantime he and his 74-year-old mother are living in public housing nearby and paying the rent.

He said they were considering riding out the storm until he saw grave warnings on the local news about the need to evacuate. It’s a good thing they did.

“We stacked it up all right here,” he said of the remains of his house, pointing to the roadside. Trucks later carted it all away.

Editor's note: This story was changed May 7 to correct Lake Charles's ranking among Louisiana's largest cities.

COVID variant on the rise in a recovering Lake Charles; demand for vaccinations slackens

An increase in cases of the more transmissible U.K. coronavirus variant in southwest Louisiana has added urgency to vaccination efforts there.…