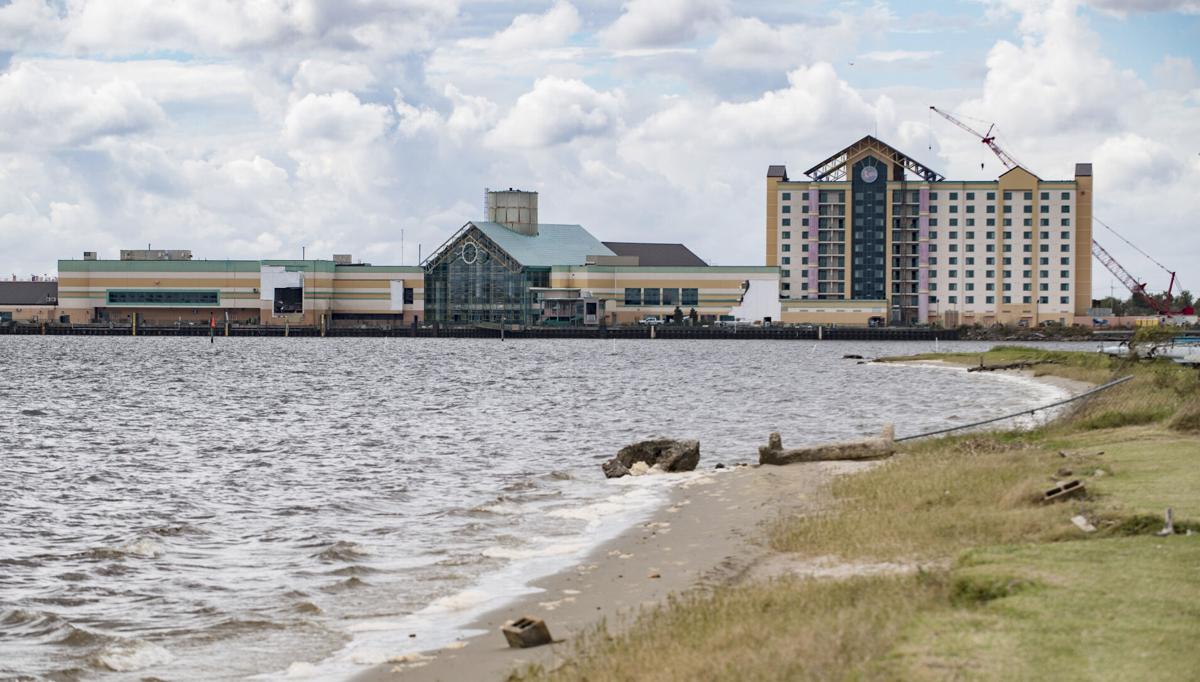 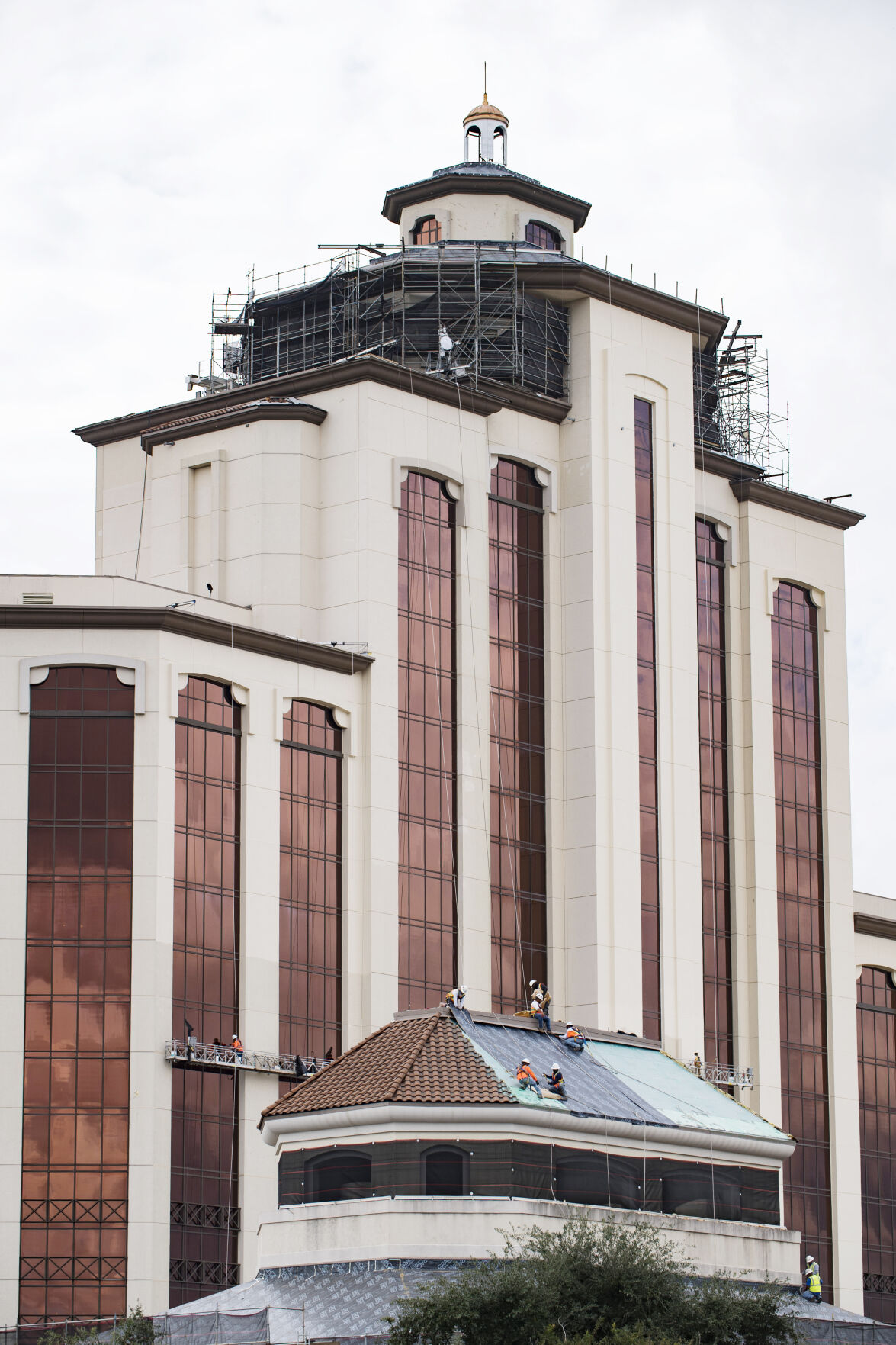 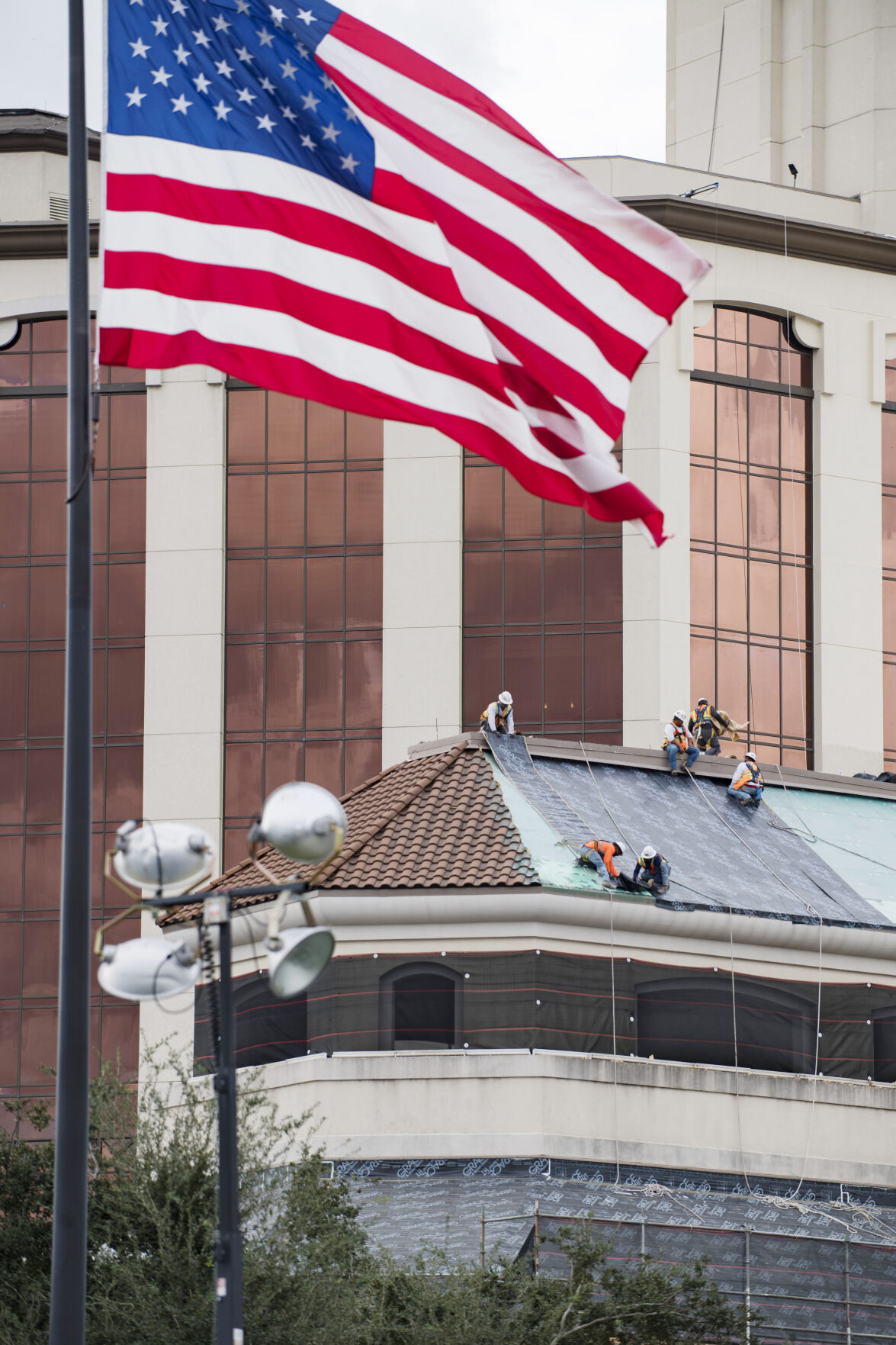 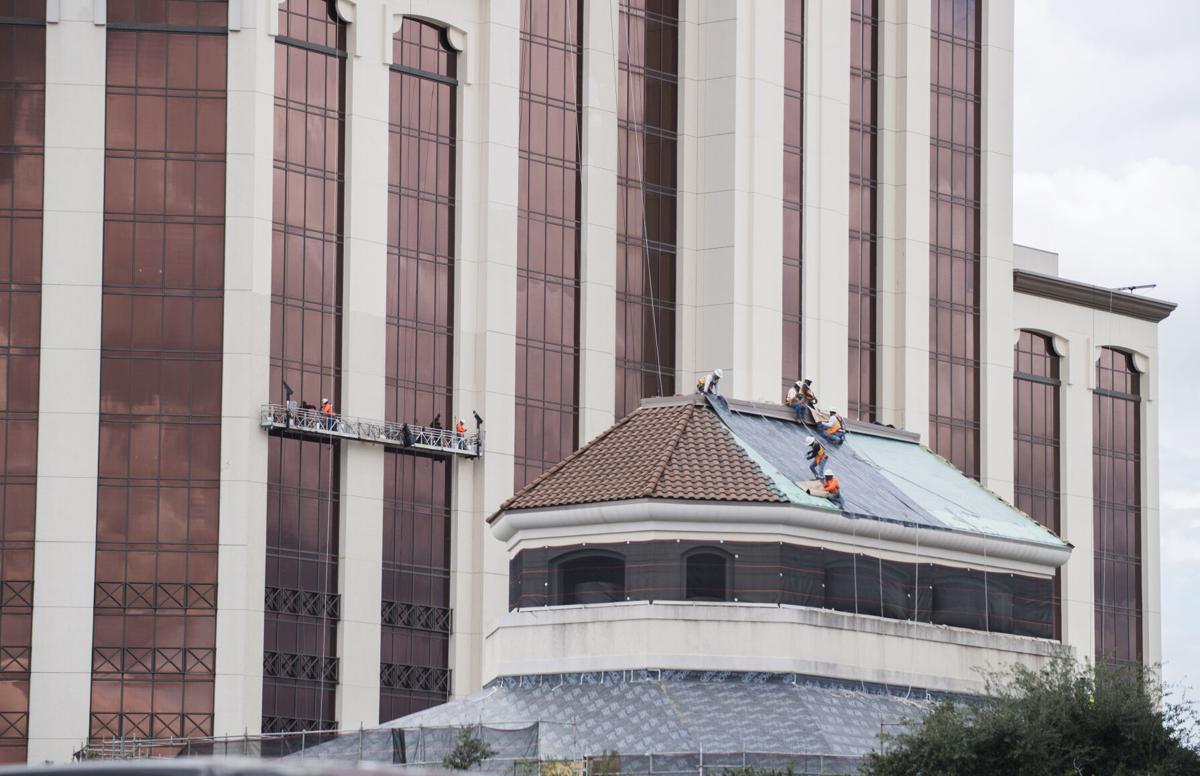 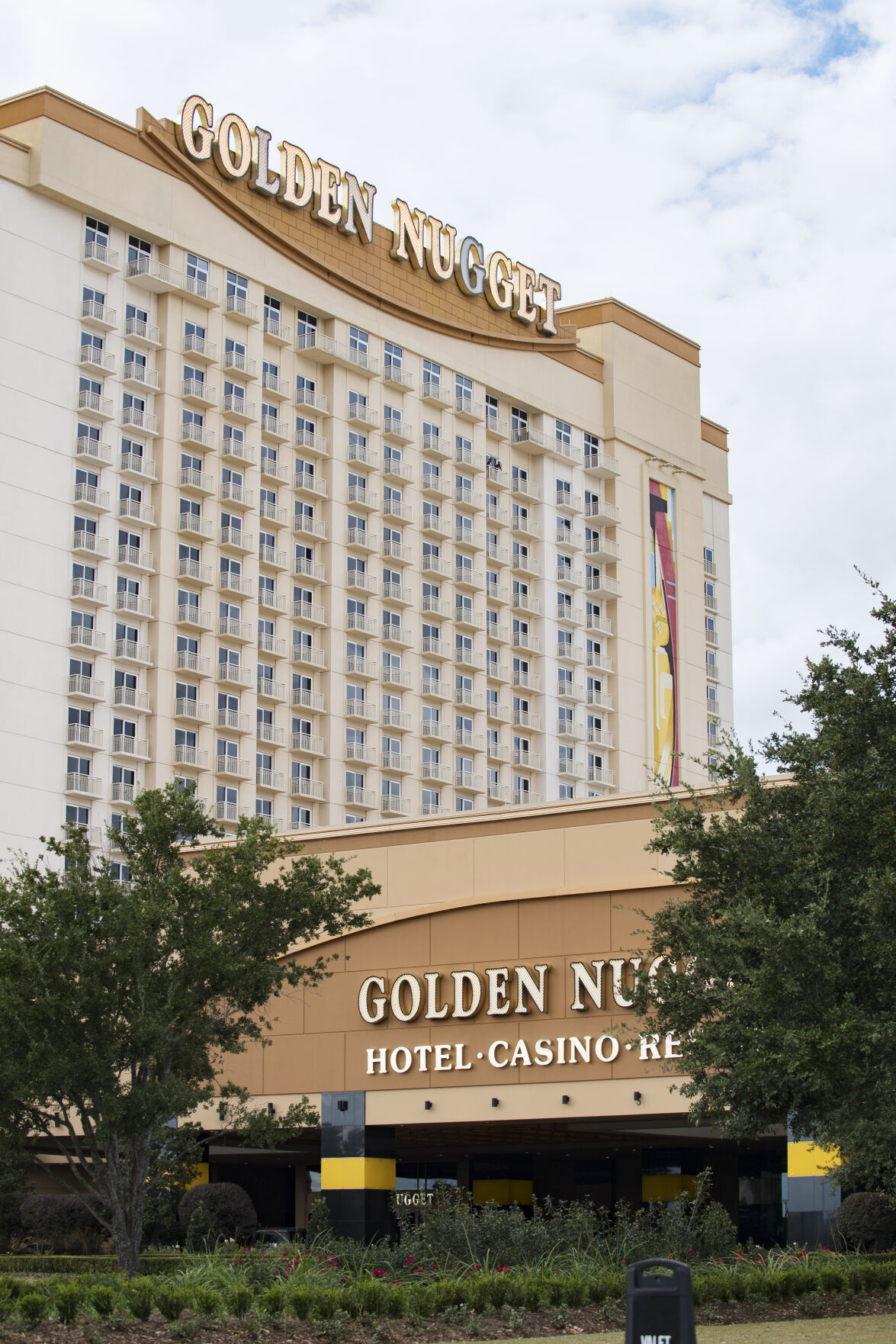 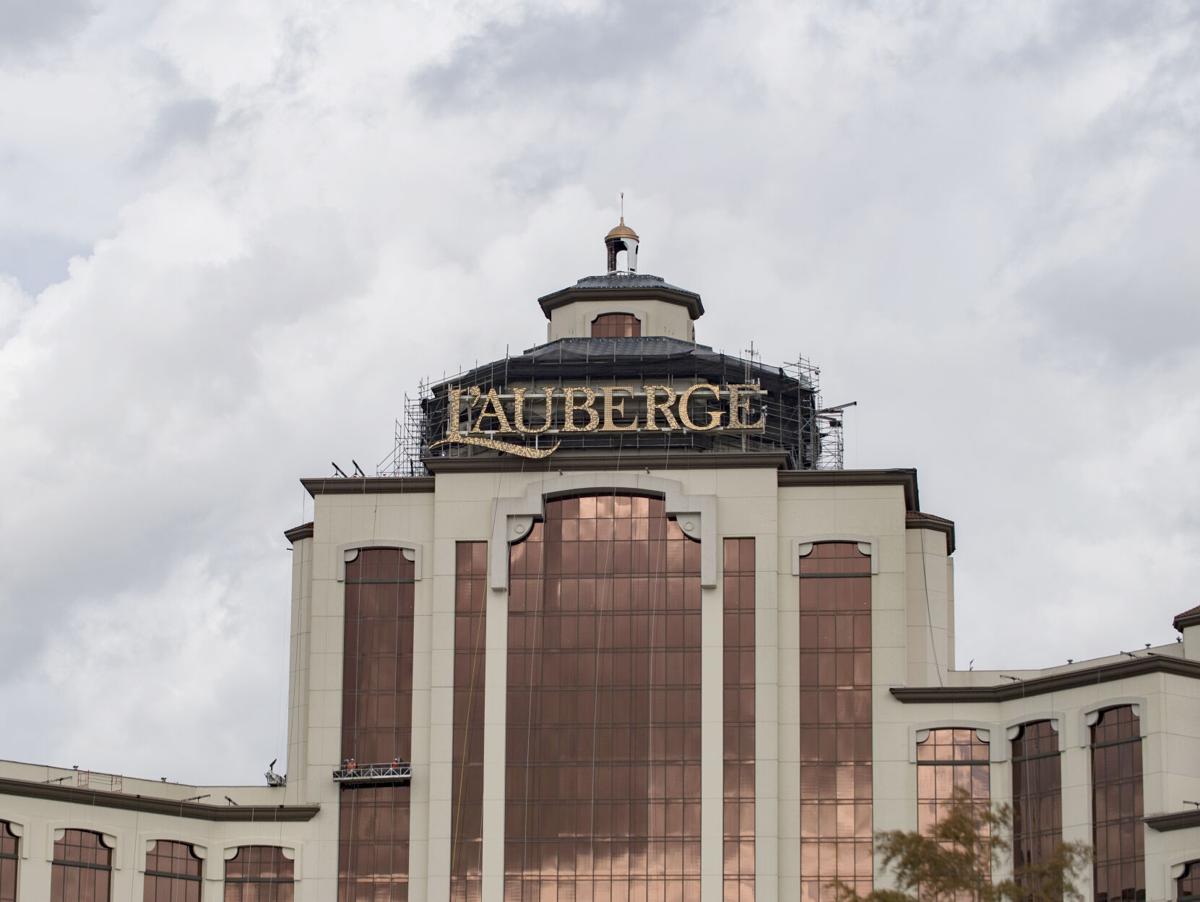 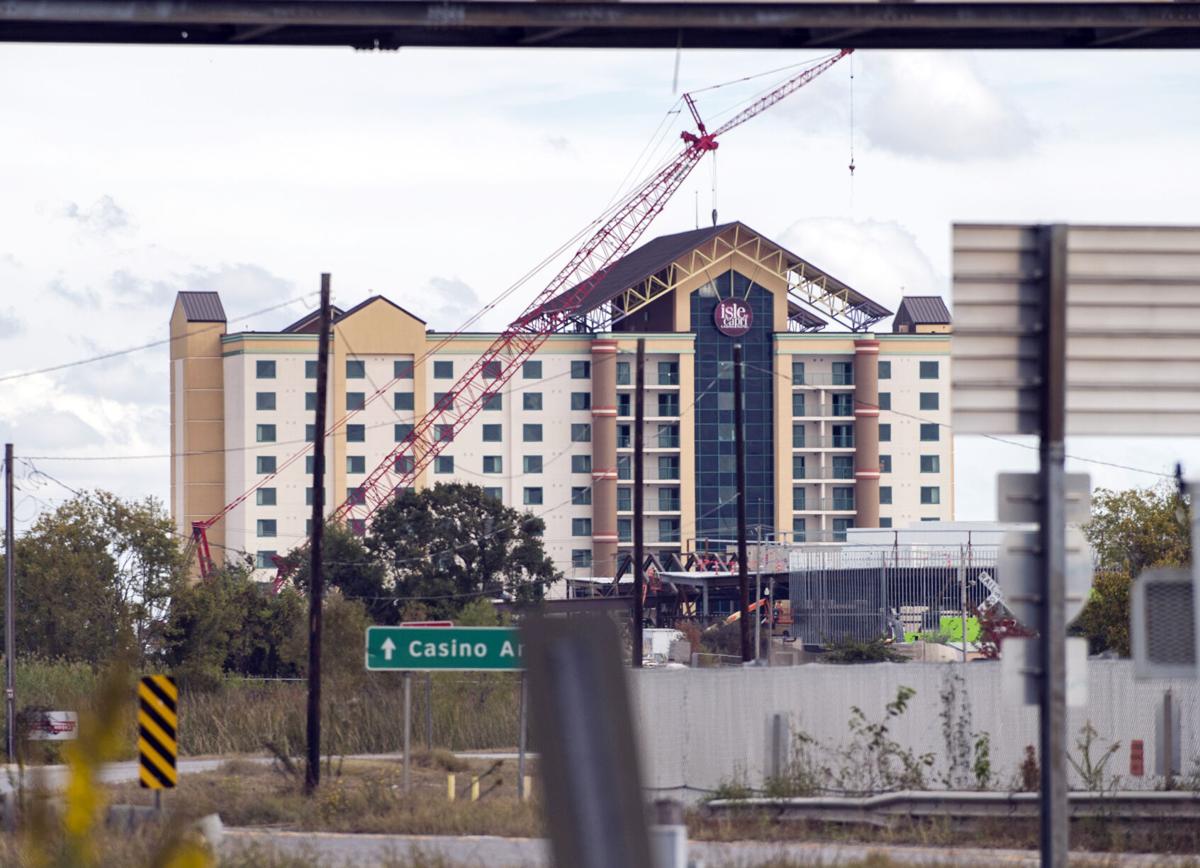 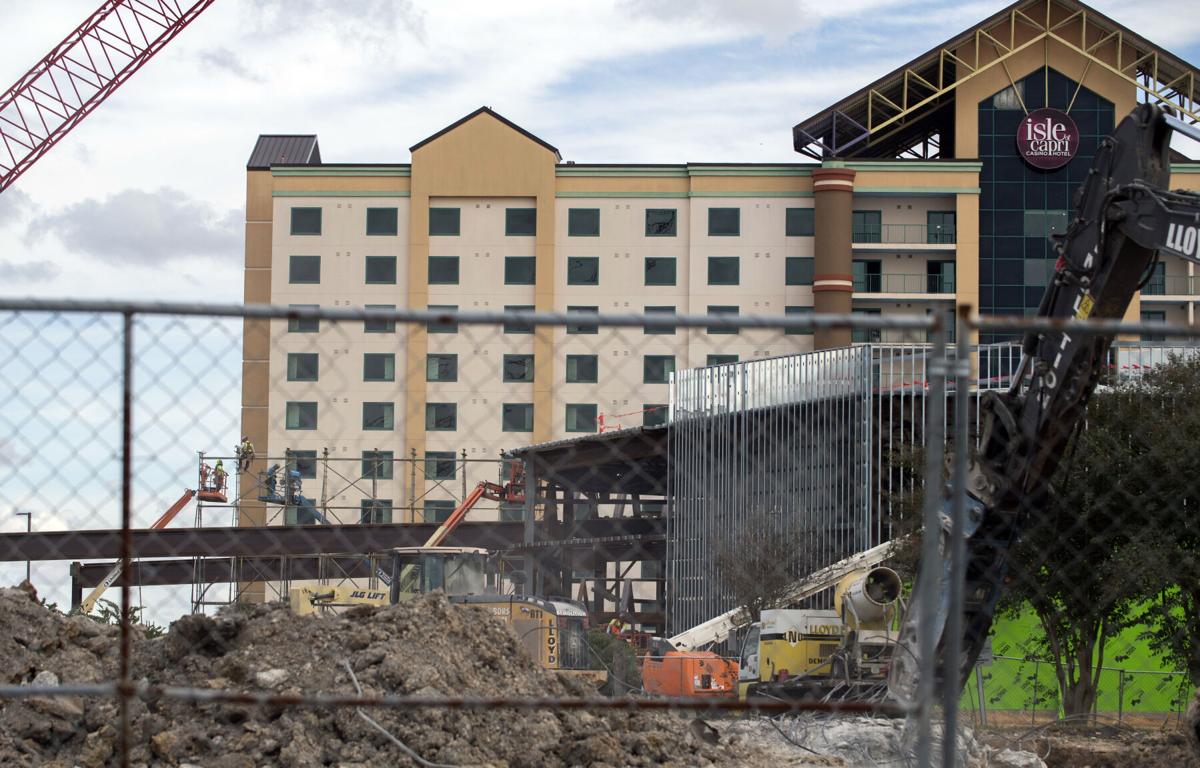 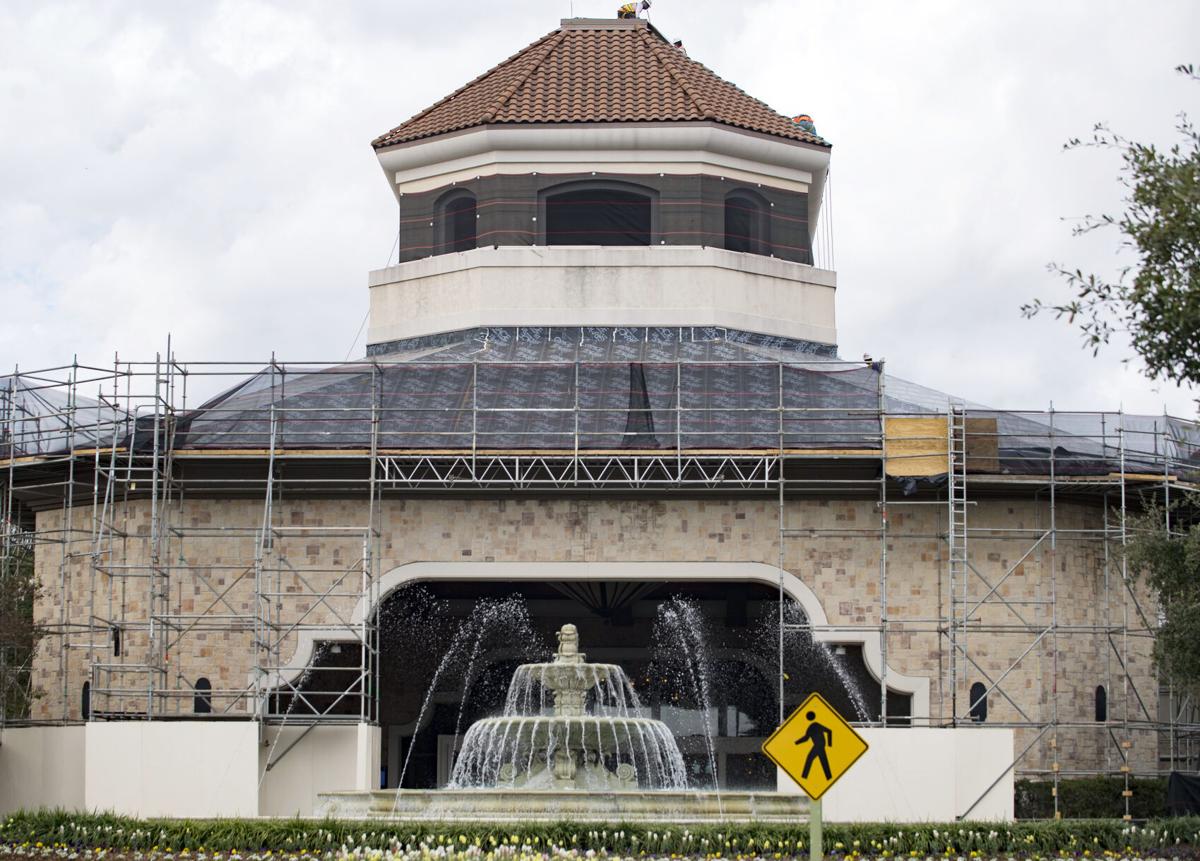 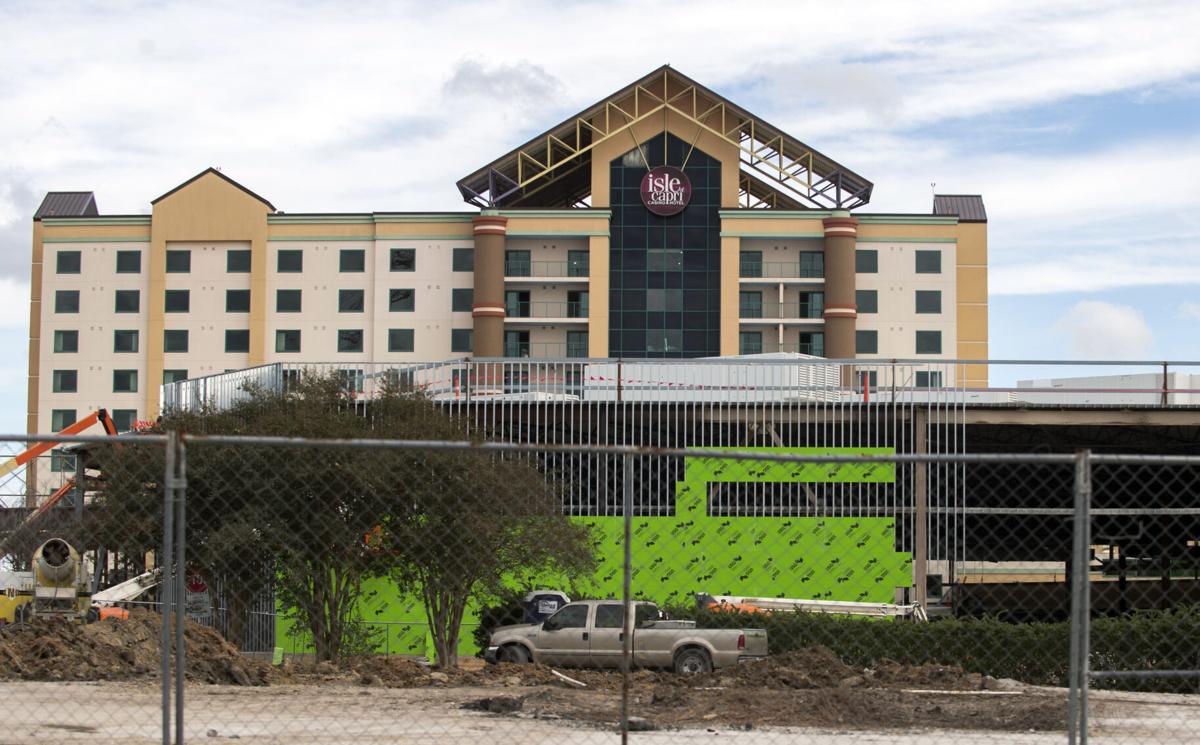 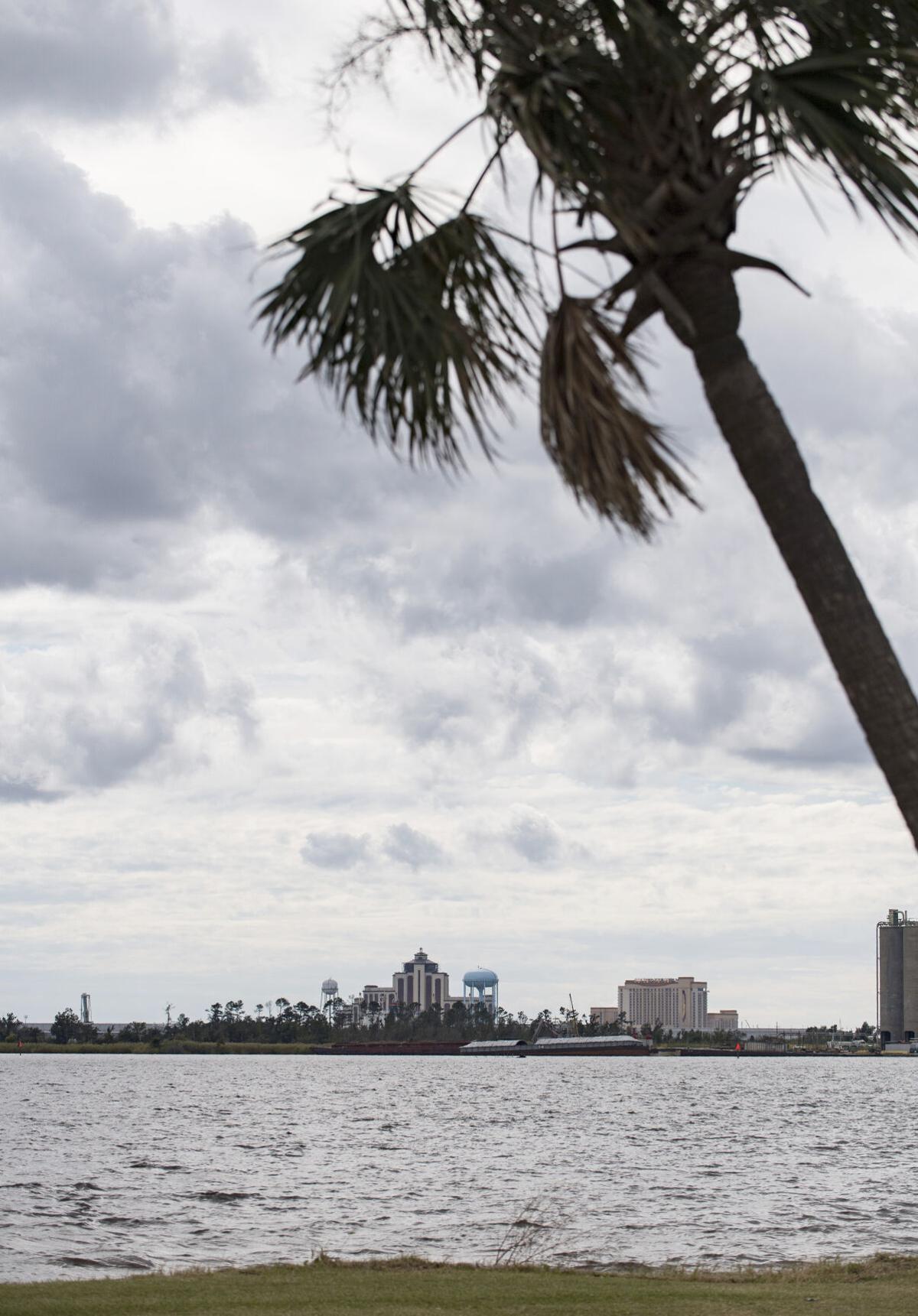 The L'Auberge and Golden Nugget casinos can be seen in the distance across the city's namesake lake Wednesday, November 10, 2021, in Lake Charles, La. 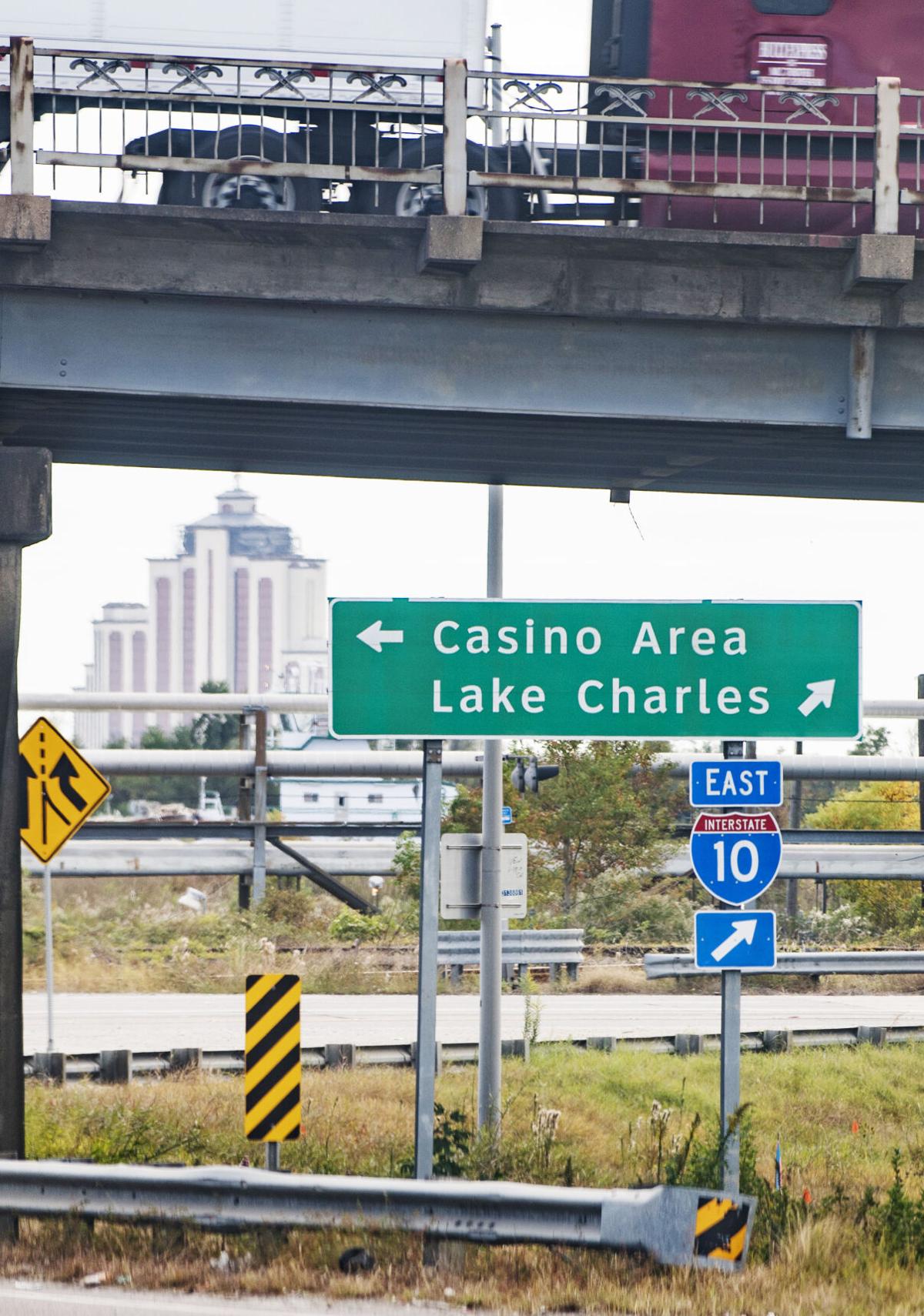 L'Auberge Casino can be seen in distance as traffice passes over the I-10 bridge Wednesday, November 10, 2021, in Lake Charles, La. The sign directs motorists to the old Isle of Capri Casino site, which is being turned into a land-based Horseshoe Casino, across the lake from L'auberge and Golden Nugget.

The L'Auberge and Golden Nugget casinos can be seen in the distance across the city's namesake lake Wednesday, November 10, 2021, in Lake Charles, La.

LAKE CHARLES — When the Golden Nugget unveiled its new sportsbook here last week, it showed its hand and made no bones about it.

Its target audience was clear from the person chosen to place a ceremonial bet as cameras clicked away: Mattress Mack. The furniture seller and prolific gambler, whose real name is Jim McIngvale, may be unfamiliar to many Louisianans. But he’s famous in Houston, a couple hours’ drive from Lake Charles.

“Normally I have to fly to Las Vegas or to Colorado or to New Jersey, and now Louisiana’s just a hop, skip and a jump away from Houston,” he said Thursday after plunking down $60,000 on the money line for Texas A&M over Ole Miss at the DraftKings Sportsbook.

The state’s biggest casino market is back in the money again following the dual hurricanes that devastated southwest Louisiana in 2020. Last week’s opening of sportsbooks at Lake Charles’ two casino resorts — the Golden Nugget and L’Auberge — are expected to bring further revenue and a potential new set of gamblers to dine at the venues’ restaurants or float down their lazy rivers.

A third resort, the former Isle of Capri riverboat casino, across the Calcasieu River in Westlake, was damaged after it was set adrift by Hurricane Laura’s 150 mph winds. It is expected to reopen as the land-based Horseshoe Casino in the fall of 2022 and include a Caesar’s Sportsbook.

The Delta Downs racetrack in nearby Vinton is also seeking a sportsbook license.

But there are legitimate questions over how long the region will be able to ride the wave of new money. There have been efforts to legalize casino gambling next door in Texas, and while that could still be years away, such a move would cut deeply into the Lake Charles area’s customer base.

More than 80% of the Golden Nugget’s business comes from the Beaumont and Houston areas, said general manager Greg Hennagin.

Take Mike and Sandra Sutherland, for instance. They were strolling the cavernous halls of L’Auberge on a recent day on one of their regular trips from Houston. They appreciate the convenience of having two large casinos in walking distance of one another, plus their hotels, restaurants and other amenities, allowing them to stay put and enjoy themselves. They’ve occasionally done some fishing in the area.

But asked if they’d just stay in Texas if a casino opened closer to home, Mike Sutherland, 60, an auto parts industry manager, said: “Probably so — because of the convenience piece of it.”

‘Do some big things’

Local officials here are obviously aware of that possibility and say they are prepared for it. They have taken steps to try to insulate themselves against any drop in gaming revenue.

Calcasieu Parish does not budget casino revenue in the year it is generated, instead holding it in reserve until the following year, said Alberto Galan, assistant to the parish administrator. The city, like the parish, uses the money for nonrecurring expenses such as infrastructure projects and debt payments, said Finance Director Karen Harrell. A parishwide pool has been created to distribute the revenue based on formulas, which also helps spread the loss if one casino happens to perform poorly in a given timeframe.

Still, the permanent loss of a Texas-sized customer base could not be ignored. Gaming accounts for about 7.5% of Lake Charles’ revenue and around 3 to 5% for Calcasieu Parish.

While noting there are social costs, since gambling addiction is a serious problem, local officials say the jobs and revenue gaming has brought have been positives. Calcasieu Parish Administrator Bryan Beam said the industry accounts for up to 5,000 direct jobs when all facilities are open, not counting employment in related businesses.

“My feeling looking back over what is now basically a generation of 25 years, I do feel like overall the gaming presence has been positive for Calcasieu,” Beam said. “You've got thousands of direct jobs and indirect jobs because of it. You have a much higher profile for visitors, not just from Texas, but from a lot of areas that wouldn't come otherwise. And it's been a nice additional set of funds for some public agencies to do some big things.”

Lake Charles Mayor Nic Hunter said “we view the gaming industry as an integral part of a diversified economy,” though he said he would like to see the companies explore investment in poorer sections of the city, such as by locating offices there.

“To have them bring just a few drops of that investment and put it within some of our underserved communities I think would be a great thing moving forward,” said Hunter.

The industry’s time in Lake Charles, beginning with the state’s first riverboat casinos in the 1990s, has not come without turbulence. The Harrah’s riverboat complex in Lake Charles was badly damaged by Hurricane Rita in 2005. That area of the city’s lakefront alongside Interstate 10 remains vacant, though a children’s museum and science center along with a bar and restaurant are being planned.

The show must go on -- especially in beleaguered Lake Charles

LAKE CHARLES – In a century-old building in a long-faded part of town, the lights go on, the…

Hurricane Laura, one of the most powerful storms in state history, tore through southwest Louisiana in August 2020, and the region has struggled to rebuild since. It was also hit by Category 2 Hurricane Delta six weeks later, a severe freeze in February and flooding in May.

In addition to setting the Isle of Capri riverboat adrift, Laura also damaged the Golden Nugget and L’Auberge, though they were able to reopen within weeks. First responders were able to set up there in the meantime.

Revenue, of course, plummeted during that period, but it has rebounded strongly. Receipts from the L’Auberge and Golden Nugget totaled $49.2 million in September, compared to $16 million in the immediate aftermath of Laura in 2020.

Jim Richardson, an emeritus LSU professor and former member of the state’s revenue estimating conference, said: “I appreciate people having moral arguments about gambling, but I think from a purely economic perspective, this is an industry that has been successful.”

He said when the state first approved it in the 1990s, revenue expectations may have been too high, raising false hopes. But the additional money that did come, along with jobs and tourism, has been significant, he said.

“Right now, gaming and casinos make up about 7 to 8% of the overall state budget,” said Richardson. “That's a good amount. So in that sense, it provides that type of relief. Otherwise, we’d have to use another type of tax on individuals or businesses to get that money.”

All the more reason for Lake Charles to keep a close eye on Texas. The casinos here have worked to create a resort experience, with amenities like golf courses, shopping, bars and restaurants. Their current sportsbooks are temporary, with plans for permanent, larger facilities in the works.

Ronnie Johns, the former state senator from the Lake Charles area who is now chairman of the state Gaming Control Board, said continuing on that path will be key.

“Every time you go to Las Vegas, you see these properties offering some new amenity,” he said. “They know their business, they know their market. They're always willing to reinvest in their properties, and I think that's what's going to keep them competitive.”

After a year marred by the COVID-19 pandemic, consumers are returning to area malls in advance of the holiday shopping season.