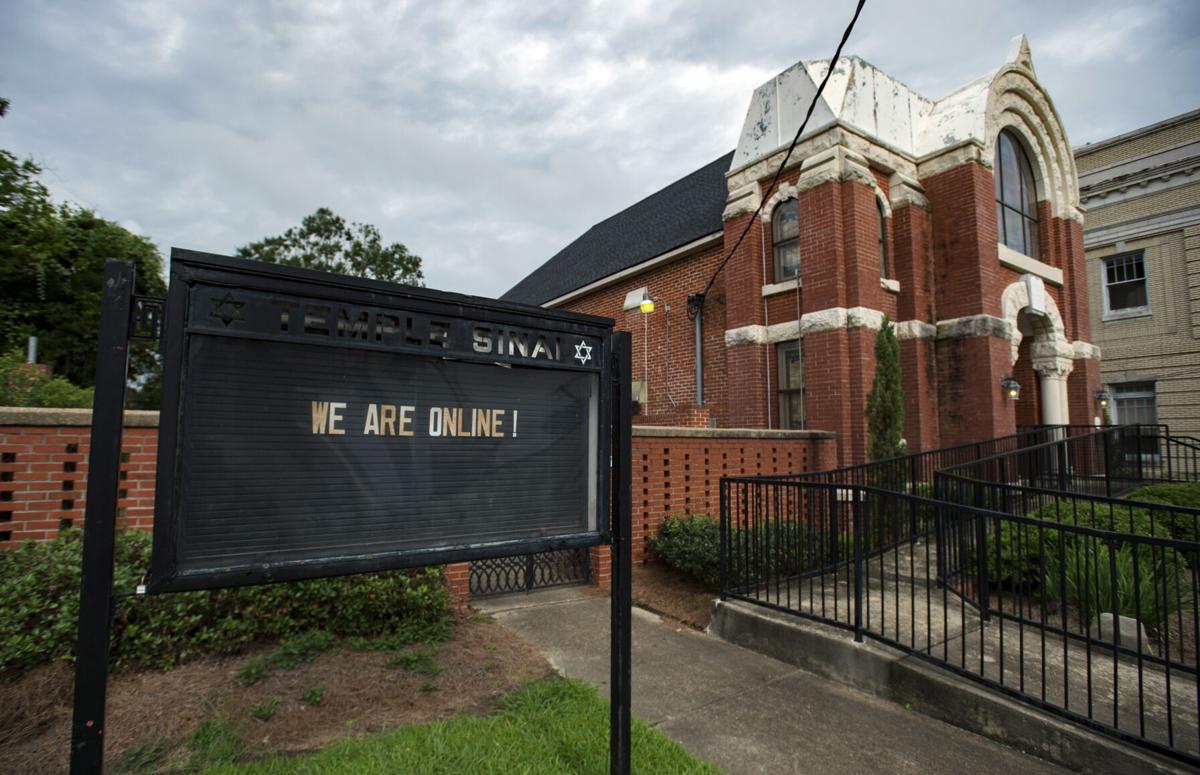 A sign advertises online services outside Temple Sinai in Lake Charles on Friday. 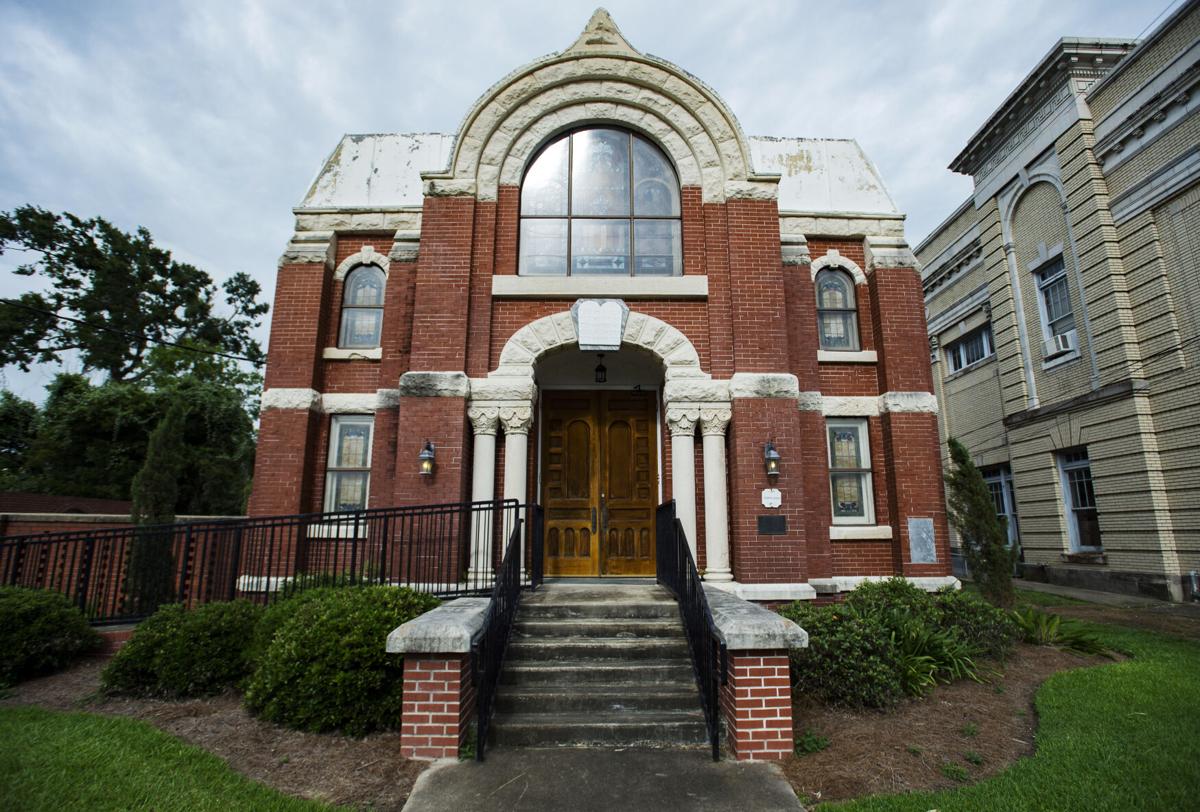 The hurricane-damaged Temple Sinai in Lake Charles is pictured Friday. 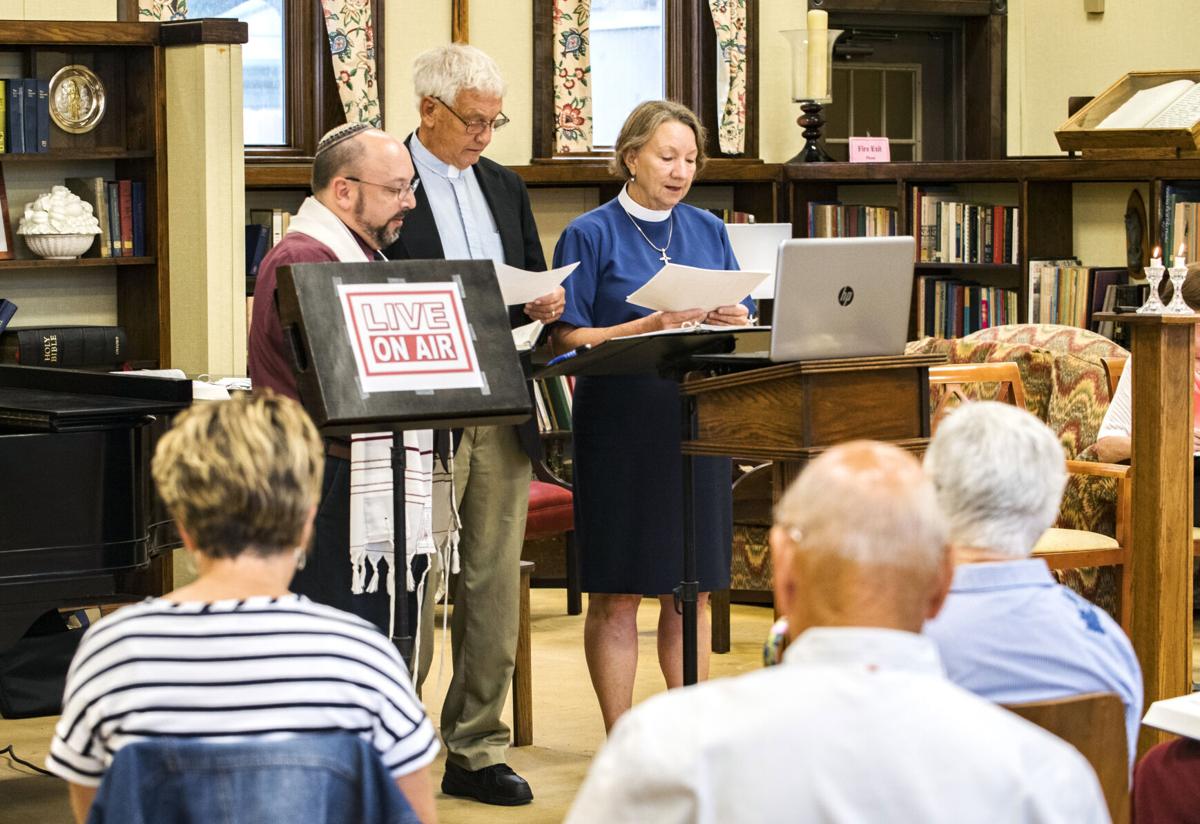 Temple Sinai cantor George Bodin, left, is joined by the Rev. Jim Lueckenhoff and the Rev. Frances "Boo" Kay of Episcopal Church of the Good Shepherd for a reading during a Shabbat service on Friday at the church in Lake Charles. Good Shepherd is giving Temple Sinai space to hold services as it awaits repairs to its temple, damaged last year during Hurricane Laura. 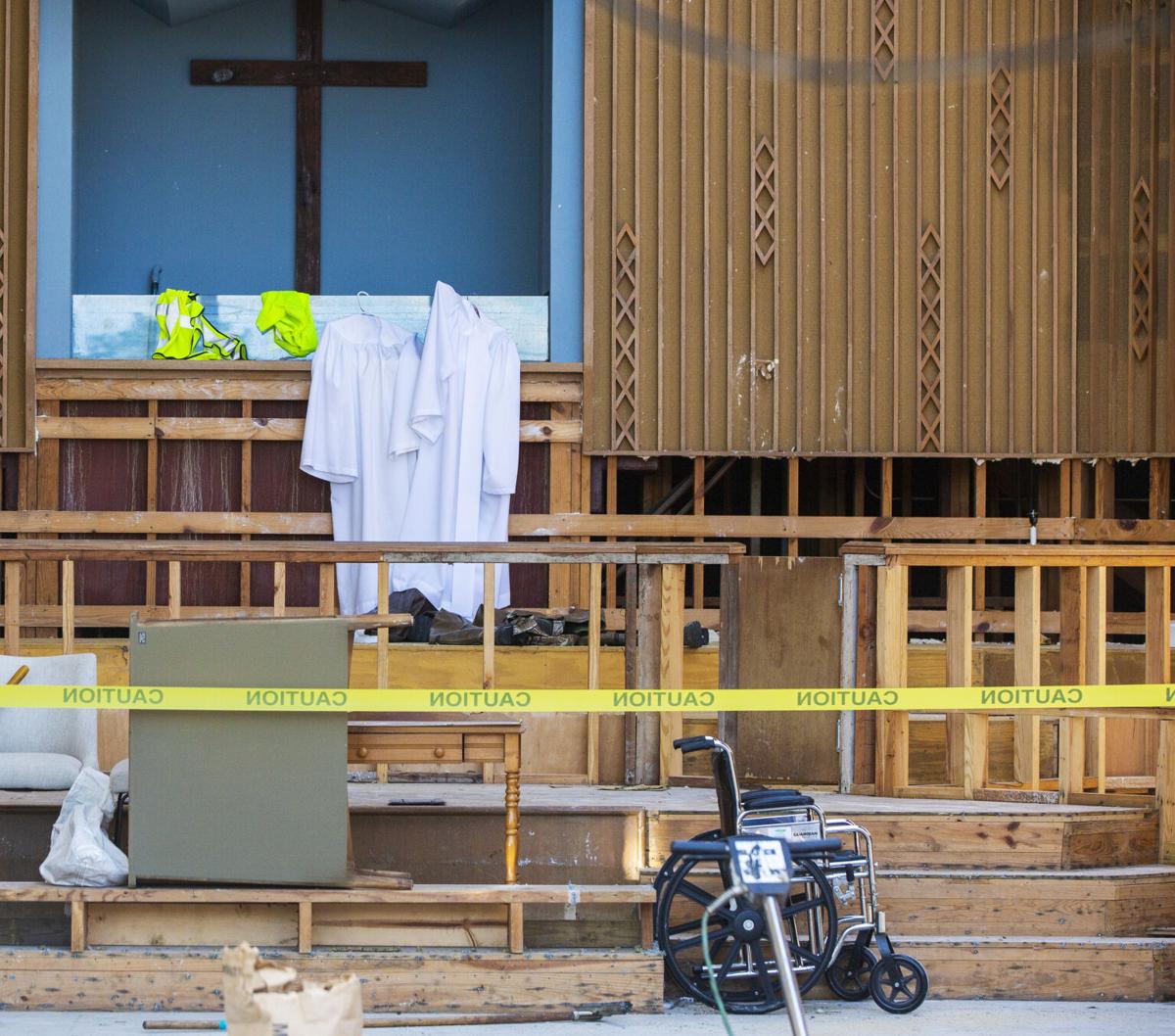 Emmanuel Baptist Church in Lake Charles is exposed Sept. 10 after a portion of the roof was blown off by Hurricane Laura. 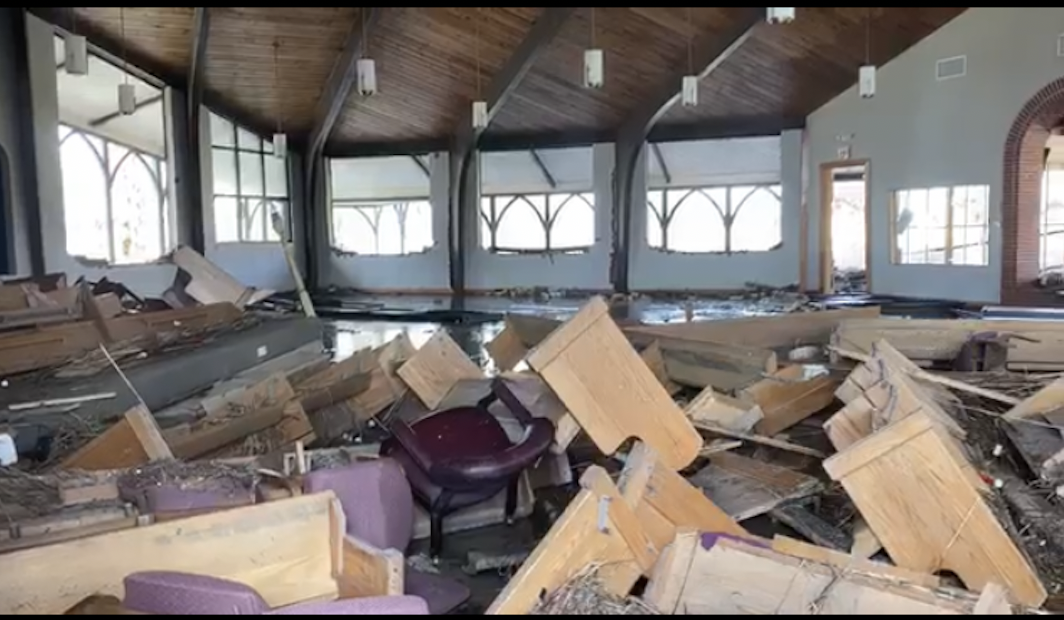 Our Lady Star of the Sea Roman Catholic Church in Cameron sustained damage from Hurricane Laura in 2020. 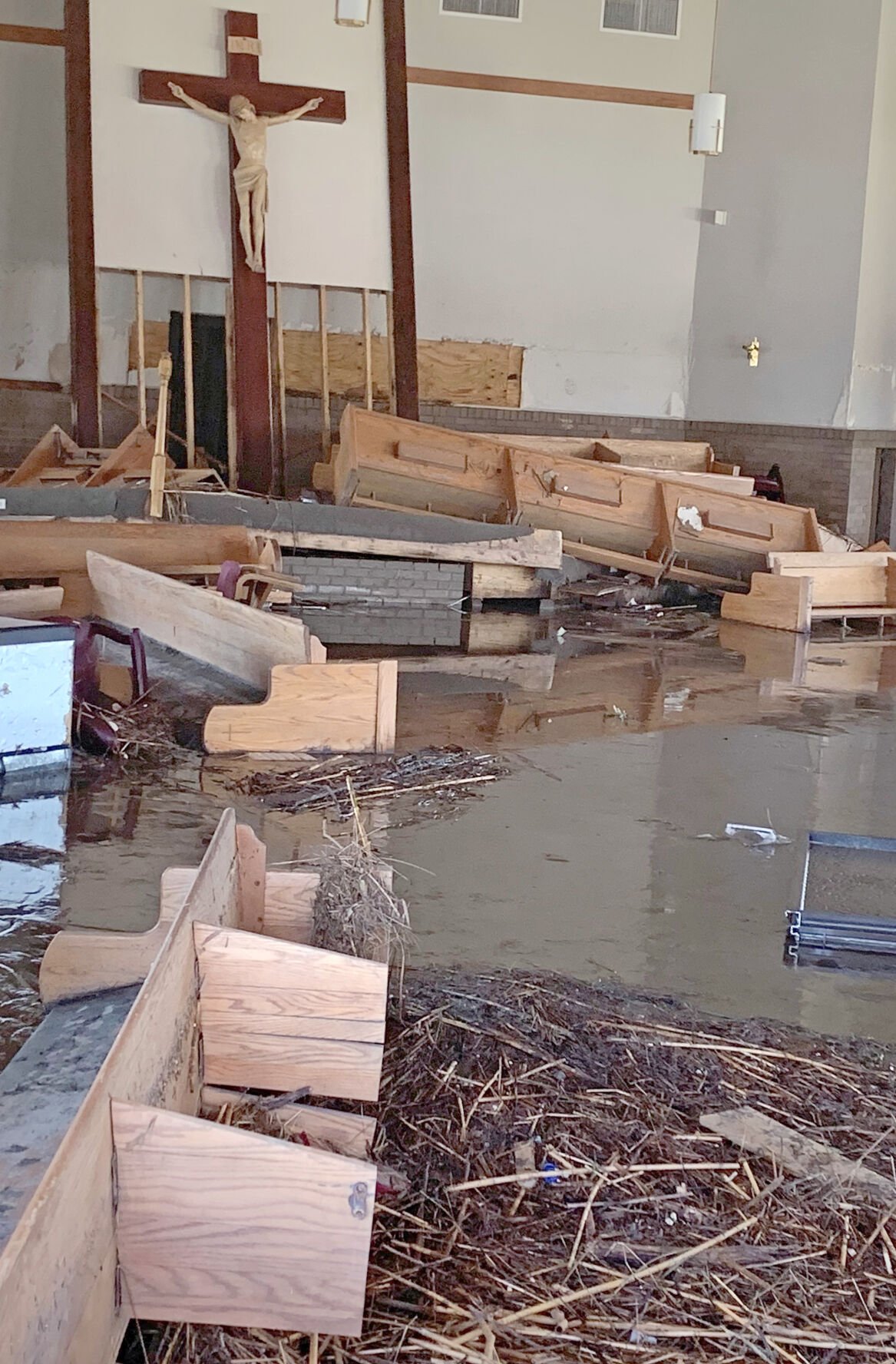 Pews lay toppled from water that Hurricane Laura pushed through Our Lady Star of the Sea Roman Catholic Church in Cameron on Aug. 31.

A sign advertises online services outside Temple Sinai in Lake Charles on Friday.

Pews lay toppled from water that Hurricane Laura pushed through Our Lady Star of the Sea Roman Catholic Church in Cameron on Aug. 31.

LAKE CHARLES — In a meeting hall connected to a stone church, Jewish prayer rose from the faithful gathered on a recent evening under a painting of Jesus. It might have struck some as an odd arrangement, but it was simply a matter of a century-old favor being returned.

With the Lake Charles area’s only synagogue still out of commission after last year’s hurricanes, the Episcopal Church of the Good Shepherd has offered up space for Temple Sinai’s congregants to gather. It seemed like the natural thing to do: In 1918, Temple Sinai did the same for the church when a hurricane destroyed Good Shepherd's building.

“We've always had this kind of bond generationally,” said Joel Davidson, president of Temple Sinai, whose synagogue in downtown Lake Charles was built in 1904. “So when they finally got their social hall completed from the rebuild after the hurricanes, they called us and said, ‘Hey, we want you to know that if you all need to use our social hall for services, it's available.’ We were like, ‘Wow! What?’”

The invitation made for a joyful moment after a tough 10 months that has offered too few of them. Like the rest of southwest Louisiana, the Lake Charles region’s religious institutions have been working to build back after two hurricanes in 2020, a winter storm in February and flooding in May. The disasters have sent legions of faithful to attend services wherever they can be held, from a large trailer to community halls.

The Roman Catholic diocese here has been coping with $130 million in damage and arriving at some tough decisions about the future. A prominent Baptist church in Lake Charles has worked to maintain its food and clothing distributions despite losing a number of its buildings to the storms.

The importance of such institutions to residents in this part of the state is profound, both for spiritual reasons and for the community services they provide. Southwest Louisiana is among the state’s most religiously devout regions, and religious leaders said they felt it was their duty to return to the pulpit as soon as possible and encourage residents to keep the faith.

LAKE CHARLES — Kylee Vidrine was a one-woman vaccination machine when COVID-19 shots were first being distributed. She turned her pharmacy int…

About 70 percent of Calcasieu Parish’s population were members of faith congregations, a 2010 census by the Association of Statisticians of American Religious Bodies showed. The figure was 81 percent for Cameron Parish to the south. The statewide number was 61 percent, the national figure 49 percent.

“I sent out a text message to the whole parish: ‘I will have Mass in the church on Sunday, and anyone who is here is welcome',” the Rev. Jeffrey Starkovich, pastor at St. Pius X Catholic Church in Ragley, north of Lake Charles, said of the days after Hurricane Laura hit in August. “We had 50 people. ... Even afterwards, everybody stayed for about an hour. Just ‘How are you? How's your family?'”

Starkovich continues to celebrate Mass inside the damaged nave as St. Pius awaits repairs. Parts of the building are gutted, and a roll of paper bought online covers the back wall.

Church offices and religious education classrooms next to the church sit as if time suddenly stopped and melted; paperwork, books and a photocopy machine are draped in pieces of fallen ceiling. A small houseplant remains in a knocked-over pot on a desktop, while nearby shelves droop from water damage.

Back in Lake Charles, pastor Samuel Tolbert Jr. might end up being one of the lucky ones, although not because his Greater St. Mary Missionary Baptist Church survived the storms unscathed. Both of its buildings are unusable, so Tolbert has been sharing space with a smaller church and also streaming services online. A complex in north Lake Charles where his church organizes food and clothes distribution, among other activities such as youth boxing, saw heavy damage, but the distributions continue.

Its gymnasium, where midnight basketball and other events were held, was destroyed and has been demolished; all that remains is a set of steps rising above an empty slab. Exercise equipment and punching bags sit in the open near where the boxing ring used to be.

The damage amounted to millions of dollars, but with the help of lawyers, Tolbert said he is on the cusp of receiving enough insurance money to rebuild much of what the church had at three locations. He’s relieved - but also concerned for the families who still have not made it back to the area after Hurricane Laura in August and Hurricane Delta in October.

“To be honest with you, the only word I can use - I was overwhelmed,” Tolbert, a former Lake Charles City Council member, said of his initial reaction upon seeing the damage. “I didn’t know what to think. I didn’t know what to do. I’m going from building to building. Everywhere I go, there’s destruction.”

Another church, Emmanuel Baptist, sits at a busy Lake Charles intersection and has become a constant reminder of the storms. Laura tore off much of its pitched roof, and the church sits open to the elements, the cross and baptistry pool still in place. A homeless man has taken up residence in the complex.

Pastor Michael Shamblin, 66, said when he first saw the devastation, he was “ready to quit.” But encouragement and assistance from Emmanuel members, as well as other churches, led him to rethink. He, his son and others also helped church members in the days after the storm by putting tarps on roofs.

A plan to rebuild the church with a lower roof pitch has been drawn up, with construction costs estimated at more than $1 million. A final decision has not been made, but Shamblin said the church will likely rebuild. Church members such as Leo LaRocque, 88, have been helping with the plans, and a nearby church has allowed Emmanuel Baptist to hold services there.

“It took us eight months to get the first bid from the first contractor,” Shamblin said. “If you look at contractors or subcontractors in the Lake Charles area, every one of them has 110 jobs lined up and they’re two months behind.”

As with much of Louisiana, the Catholic Church is a major part of life in the Lake Charles region. Before the storms, the diocese for the area counted 39 congregations. Three in storm-devastated lower Cameron Parish are now being combined into one.

The diocese has been seeking to benefit from a recent change that lets houses of worship qualify for certain types of FEMA money in addition to insurance claims, said Stephanie Rodrigue, the diocese’s director of temporal goods.

The damage is severe. Rodrigue said the diocese had 510 damaged structures on 64 properties. As one example, Christ the King Church has been holding Mass in a large trailer. A storage building has been transformed into an office and confessional booth.

Some of the decisions made as part of the rebuild have been emotional ones. A plan to move St. Louis Catholic High School from its location in the heart of Lake Charles to a new subdivision in the city’s southeast has prompted opposition from those who see it as an integral part of its current neighborhood. Lawn signs urging the diocese to “Save the Tradition” can be seen around town.

The plan to combine three parishes in lower Cameron has also upset residents who grew up in those congregations.

As southwest Louisiana’s fight for storm aid drags on, one family copes as best it can

LAKE CHARLES — At an RV park she never intended to call home, Patricia Theriot was picking up laundry when she paused to answer a question abo…

But while the larger religious institutions have received much of the attention, those serving smaller communities have struggled as well. The only mosque between Lafayette and Beaumont, Texas, operated by the Islamic Society of Lake Charles, has been holding prayers in its building even though about 40 percent of it is unusable, said Matiur Rahman, society president and a finance professor at McNeese State University.

Completion of a new mosque under construction next door has been set back by about a year because of complications related to the storms and the coronavirus pandemic, he said. The Muslim population in the area is 800 to 1,000, Rahman said.

Still, perseverance from institutions across the region has been testament to faith and community, and the Temple Sinai services at the Church of the Good Shepherd’s parish hall have been a clear example. Rabbi Barry L. Weinstein has also been streaming services at temple-sinai.tv.

Temple Sinai had begun repair work inside its red brick synagogue with white stone trim during the pandemic’s shutdown but before the 2020 storms. The hurricanes then caused extensive damage, but the congregation is hoping to be back in the building for Rosh Hashanah on Sept. 6.

The first Jewish service in the church’s hall was held June 25, and participants said it was in some ways like a family reunion. Friday evening’s service had fewer people, with around 20 in attendance, but those there were grateful for the opportunity to meet. The Revs. Frances “Boo” Kay and Jim Lueckenhoff from the Church of the Good Shepherd were among them.

“In terms of our congregation, pretty much everyone was affected,” Susan Battestin, 66, said of the storm damage. Her great-grandmother was a founding member of Temple Sinai. “It’s been quite a year between the two hurricanes and COVID and the freeze and the flood.”

LAKE CHARLES — Diadra Carmen steels herself before she opens the door, telling herself not to be afraid. Tears roll down her cheeks when she b…

After season of struggle in Lake Charles, McNeese playing for more than wins at NCAA tournament

LAKE CHARLES -- The first thing you might want to know about McNeese State’s baseball season is that head coach Justin Hill, like so many peop…