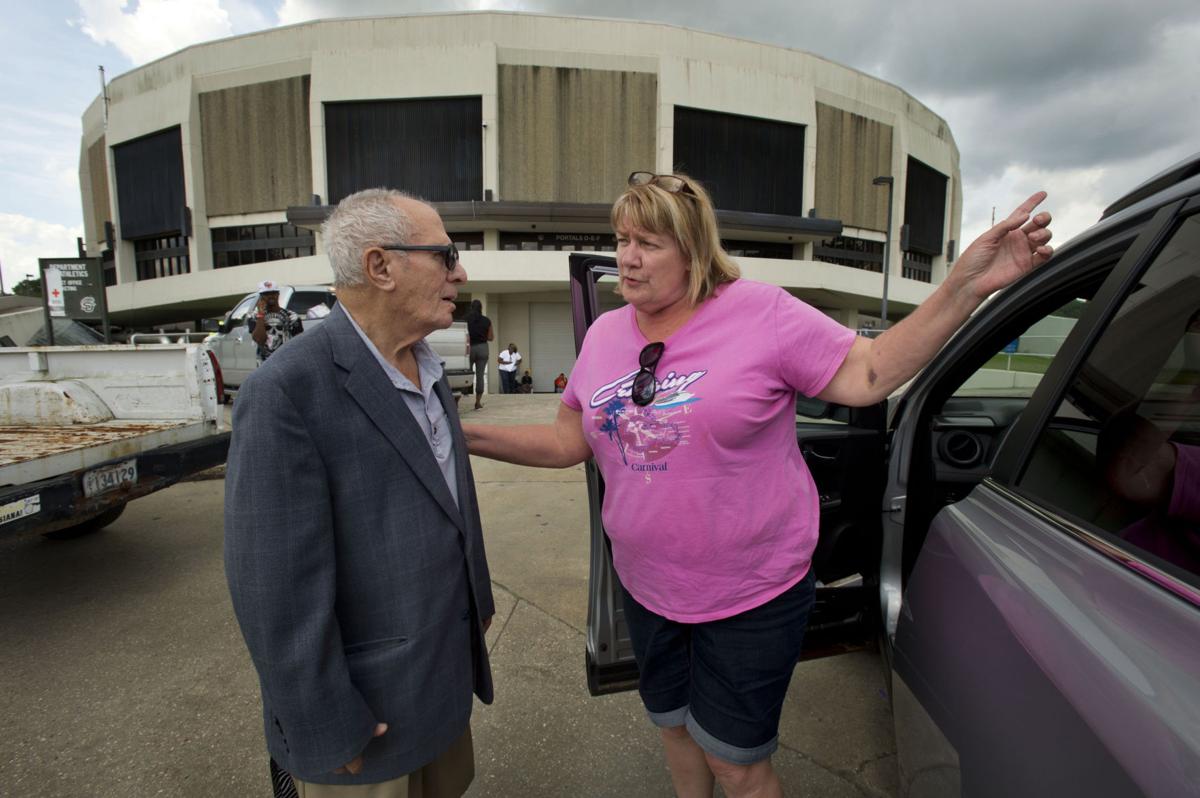 Jean Smith, right, gestures to Jerome Habib, left, after Smith drove up from New Orleans to Southern University's F.G. Clark Activity Center, background, Thurs., Aug. 18, 2016, just to bring Habib to visit his longtime partner, Smith's mother Kathryn Jones, who is a dementia patient in an area nursing home. Communications in general have suffered in the aftermath of the recent disastrous flooding, and because Habib has hearing loss, phone calls were ineffective for him to communicate with Ms. Jones. 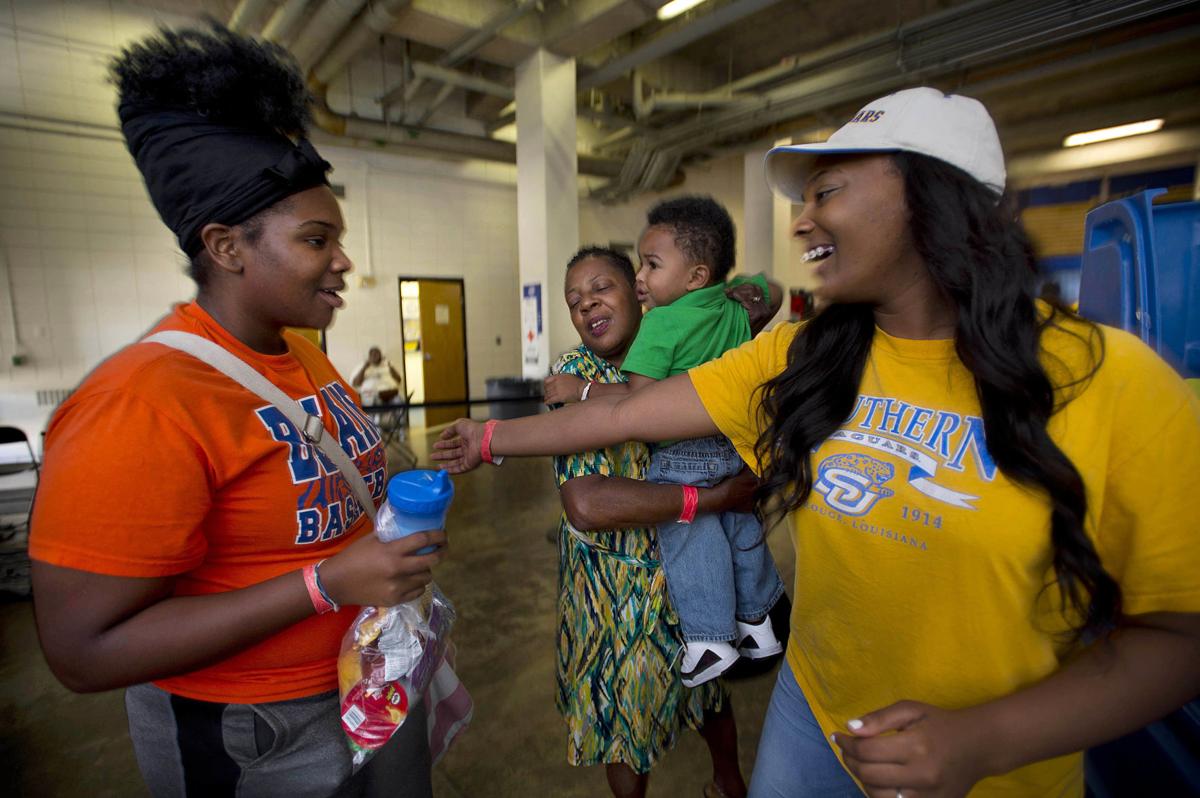 Jean Smith, right, gestures to Jerome Habib, left, after Smith drove up from New Orleans to Southern University's F.G. Clark Activity Center, background, Thurs., Aug. 18, 2016, just to bring Habib to visit his longtime partner, Smith's mother Kathryn Jones, who is a dementia patient in an area nursing home. Communications in general have suffered in the aftermath of the recent disastrous flooding, and because Habib has hearing loss, phone calls were ineffective for him to communicate with Ms. Jones.

Rather than evacuate their house in the Millerville Road area in Baton Rouge, Olivia Toney's grandparents nested upstairs and brought with them a step ladder and a hatchet in case they'd need to break through their attic.

Though Toney and her family members tried to convince the grandparents their Avalon neighborhood might flood — and it did — the couple wanted to stay. Besides, by the time they could have decided to escape on Saturday, the floodwaters were closing in too quickly, said Toney, 24.

Then Sunday morning came, and just like that, AT&T service was gone, electricity died for many residents, and bayou overflow created roadblocks all over the place.

Toney and her family dispatched another relative to lay eyes on Celtic Studios — a massive film studio that became Baton Rouge's largest shelter — in the hopes the grandparents had been saved and deposited there. Others combed Facebook and asked people in boats to try to fetch the grandparents from their house. But boaters were being turned away. Calling 911 yielded a busy tone.

On Monday, after two days of distress, Toney got a glimpse of her grandfather through a 30-second FaceTime chat. Her grandparents were fine. Their house, surrounded by streets dunked in 5 feet of water, somehow didn't flood.

In the week since a slow-moving storm system began its deluge in southern Louisiana, people relied on a wide range of communication methods, including social media, radio, word-of-mouth, borrowed phones and waving at boats.

One plea to "send pizza," however cheeky, came in the form of a message in a bottle found on a flooded street near LSU.

For many, social media is what set the Flood of 2016 apart from previous storms in memory.

"We are still very reliant upon Facebook, Facebook Messenger, and internet weather apps and web sites," Paula Annison said Thursday. Annison, who experienced the floods in Zachary, said that during the storm she also discovered the power of Twitter, which she said proved a faster way of obtaining road closure and other public safety information than some official channels.

"We didn't have any of these things when we endured the special, fantastical hurricane of hell that was Gustav," she said of the 2008 hurricane that caused extensive damage across the greater Baton Rouge area.

With AT&T's network down Sunday, officials in Livingston Parish worried that residents stranded by floodwaters might not be able to call for help — the wireless carrier appears to serve a large majority of customers in the area. Most sheriff's deputies and soldiers with the Louisiana National Guard also found their phones useless, and the coordination of rescue efforts revolved in part around pairing those with radios and working phones from other carriers.

At emergency shelters and makeshift gathering points, anxious residents asked around to find working phones. In gas stations and at churches, lines formed to use landline phones in an attempt to reach relatives or friends.

Charles Minton, an 87-year-old resident of a Denham Springs assisted living home evacuated in the early morning hours Sunday, passed the phone numbers of two grandchildren to a reporter with a request — repeated by others throughout the day — to let them know he'd come through the flood alright.

Gerald Burkins, 65, complained outside a community center on Satsuma Road in Livingston Parish that his cellphone — soaked during the escape from his Walker home — contained all the contacts he needed. He stopped memorizing numbers years ago, he said, after he started saving them in his phone.

But even when callers could raise a signal or a dial tone, they often found those on the other end without service.

That's why so many tuned in to radio stations like Eagle 98.1 and Talk 107.3, which carried a simulcast for days with live, call-in radio that became an audio bulletin board for thousands looking for information about road closures, weather, and how to get in touch with lost family members.

"Radio was the only thing that worked once Cox and AT&T went down," wrote Chris Floyd, in a Facebook post.

"FACEBOOK ALL THE WAY!" wrote Marissa Rabalais Turner, in another post. "There is no doubt in my mind that the coordination of recovery efforts via Facebook saved many, many lives."

For 68-year-old Richard Wilson, the only sources of information to this day are the people who walk up to him at a shelter inside the gym at North Corbin Junior High School in Walker. He's been staying there since Sunday, when he waved over a boat that scooped him up from his waterlogged house.

Wilson has no phone, no wallet, no access to a bank and no remnants from his former life. His common-law wife died a while ago, he said. Wearing clothing provided by the shelter, Wilson pointed down at his cot when asked where he lives.

"If we could get hold of a car, turn the bank money loose, let us go to a bank so we could get money. We could get ahold of FEMA and let them get a trailer for us. FEMA could come in here with bulldozers, put a slab in there, drop a couple trailers in there," Wilson said, referring to his ruined plot of land.

Another man in that shelter, 88-year-old Ernest Scott, was flooded out twice in two days — on Saturday in his car, and on Sunday in his house on Jason Drive in Denham Springs.

"I haven't been able to contact the people in my neighborhood," said Scott, who also doesn't have a phone and relies on shelter workers to "come and tell me what's what."

Scott said though he's been displaced, his experience at the shelter has been wonderful. He's staying there with his son.

"Being out here, you couldn't ask for a nicer group of people," he said. "And the law enforcement that's been out here, they've been the greatest. You couldn't say nothing wrong about any of 'em."