Although a federal aid program to help disaster victims can provide as much as $33,000 per household, typical grants run a fraction of that amount, averaging $8,000 or less, according to an analysis by The Advocate of payouts in a dozen recent high-profile disasters.

Superstorm Sandy, Hurricane Katrina and the San Diego wildfires all saw average payouts of between $7,000 and $8,000, while grants after the March floods in Louisiana and Texas averaged in the $5,000 range.

The average payout for those affected by Hurricanes Rita, Isaac and Gustav was about $3,000, according to data provided by the Federal Emergency Management Agency. 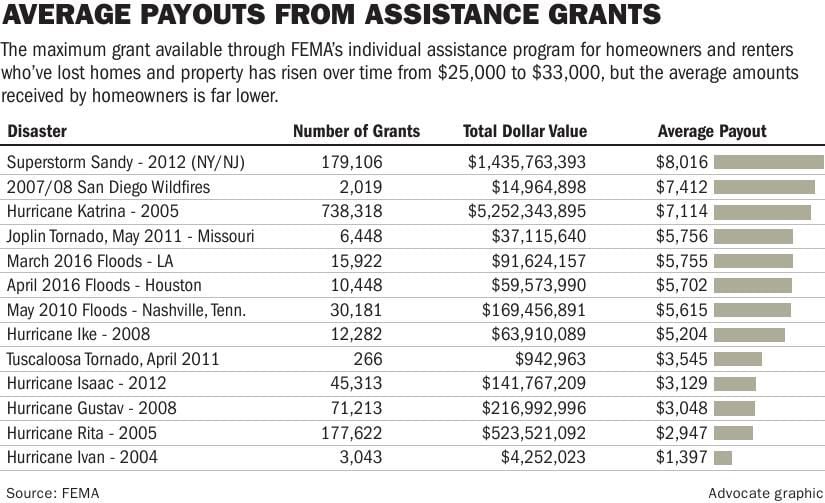 FEMA's main programs have traditionally been public assistance -- money, some of which must be paid back, that is funneled through the state to help local government entities get back on their feet -- and individual assistance, which puts money directly in residents' hands.

A huge percentage of those afflicted by this month's floods don't have flood insurance and thus have been casting a longing eye at the individual assistance program in hopes that it will help cover their losses.

The program, which aims to help cover short-term rent and utilities and some uninsured damage, has a cap that rises with the cost of living. The maximum grant has grown from $25,000 in 2005 to $33,000 today.

The individual assistance program is a feature of the Stafford Act, which governs federal response to officially declared disasters. It is open to homeowners and renters alike, and to those with and without insurance.

But it won’t duplicate any private insurance coverage people have, and renters won’t get the money for repairs.

According to The Advocate’s analysis, about 75 to 80 percent of the payouts in recent major disasters went toward short-term rental assistance and basic repairs to homes to make them habitable.

The rest of the payouts were for certain lost personal items that FEMA covers -- beds, basic appliances and some furniture -- and those calculations are based on average replacement cost. In other words, you don’t get money for the value of the couch you had but for what an average couch would cost. And if you lost three beds but only you and your spouse still live in your home, you’ll get money for only one bed.

The program is notorious for giving devastated residents a kind of reverse sticker shock, leaving them wondering how to rebuild their lives with a check for just a few thousand dollars.

The average payouts in the disasters examined by The Advocate have never reached even 30 percent of the maximum. If that same figure is reached for this summer's floods, the average check would be $10,000.

Other aid to individuals is available via low-interest loans through the U.S. Small Business Administration, which acts as a financial emergency response agency during federally declared disasters, and any supplemental programs designed specifically for that disaster.

For Katrina, that was the Road Home Program, which was funded by Congress to help people who had lost their homes rebuild.

Asked how to possibly improve the program, Landrieu said state and local officials have to unite and lobby hard at the congressional level to make necessary changes to the program.

“A smart strategy would be for the state and the leadership to see if there is any way for those averages to be increased,” she said.

She also said local officials should fight for a supplemental program to help the tens of thousands of Louisianians displaced by the floods or possibly new programs that would bolster the work of groups like the Baton Rouge Area Foundation, the Center for Planning Excellence, Habitat for Humanity and the St. Bernard Project.

How flood victims can claim losses on 2015 tax returns

Louisiana Lt. Gov. Billy Nungesser is settling into a new role — one that other state leaders say he's uniquely qualified for — as Louisiana p…