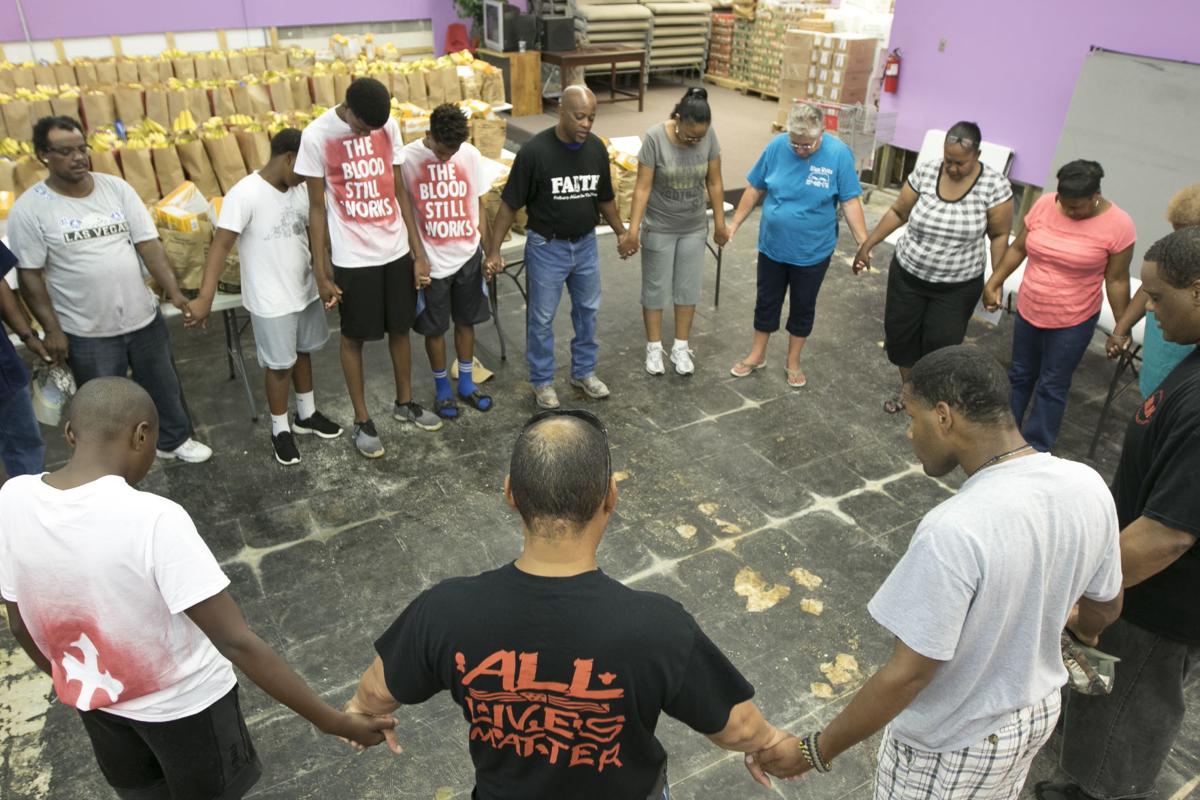 Ernest Williams (center black shirt FAITH) pastor of New Beginnings Primitive Baptist Church leads a prayer as the members of his church are about to distribute food and cleaning supplies from Second Harvest Food Bank to Kaplan flood victims on Saturday morning 8/20/2016. 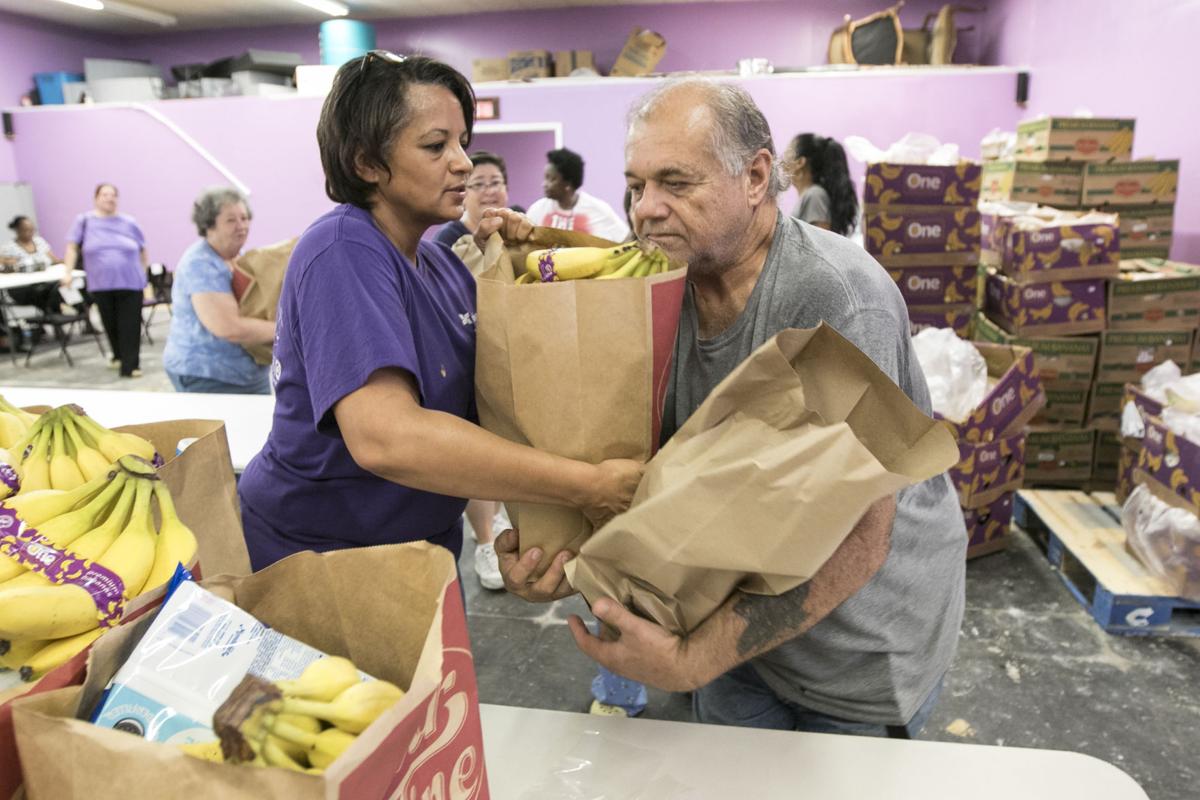 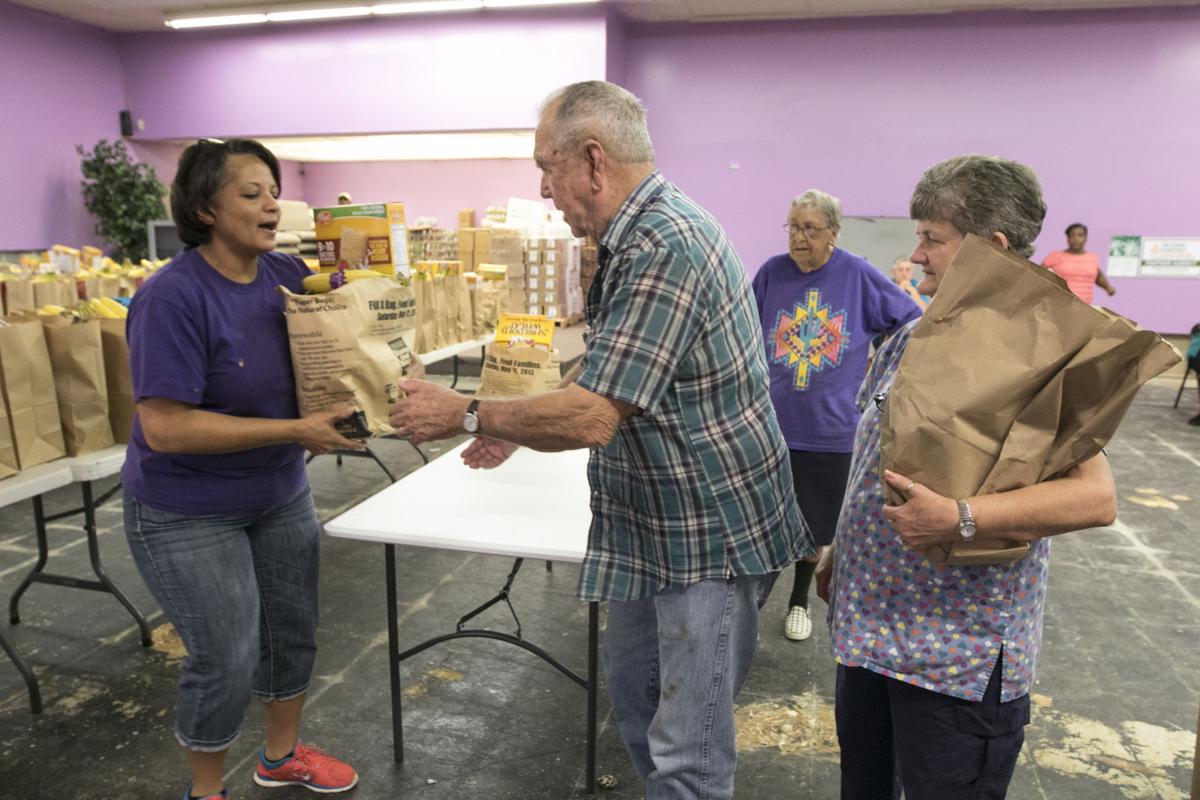 Ernest Williams (center black shirt FAITH) pastor of New Beginnings Primitive Baptist Church leads a prayer as the members of his church are about to distribute food and cleaning supplies from Second Harvest Food Bank to Kaplan flood victims on Saturday morning 8/20/2016.

KAPLAN - A group of volunteers spent their Saturday morning at New Beginnings Baptist Church here handing out bunches of bananas, boxes of cereal and bags of cleaning goods to Vermilion Parish residents affected by the flood, all the while managing their own post-rain pains.

The Kaplan church, which holds monthly drives for people and families in need, has needs of its own as a result of the widespread flooding. Tje bright purple interior is missing its flooring, and its wallboards have been removed.

Despite the fallout, the place of worship turned into a cornucopia of 12,000 pounds of essential items when church staff realized those staples were crucial for some residents.

The church ran the relief effort with the help of outside volunteers on bare floors with wood planks placed throughout the facility.

“We’ve lost computers, we’ve lost furniture, we’ve lost our children’s nursery, so we’ve been cleaning this whole time and setting up for this,” said the Rev. Ernest Williams. “We called all of these people and decided we needed to do this.”

People trickled into the church doors one by one, filled out paperwork and received a card stamped with however many families they were there to receive supplies for. Volunteers ushered people to paper bags filled with cereal, bread, meats and cleaning supplies, as well as distributed watermelons.

One of the volunteers, Deborah Meaux, a 53-year-old New Orleans native who moved to Kaplan after Hurricane Katrina, said the flood reminded her of the 2005 storm. She said her house was fine aside from losing her washer, dryer and contents of both.

“We were able to come out and help give out to the needy, and at the same time … put a semi-smile on their face if not a whole one,” she said while moving cleaning bags.

After shepherding flooded residents through the process of getting food and supplies, volunteers then brought the items to their cars.

“That’s where the blessings come in — us packing it out to the car for them instead of just giving it to them,” said Darven Williams, the New Beginnings deacon.

He said the willingness of local people to pitch in and help has aided flood recovery efforts, adding that “people just really want to help each other” in times of crisis.

Supplies came from both Second Harvest Food Bank, a nonprofit organization operating in New Orleans and Lafayette that has collected more than 208,000 pounds of supplies to aid in relief efforts.

Second Harvest is collecting donations from 7:30 a.m. to 4 p.m. Monday through Friday at its 215 E. Pinhook Road location. The organization is currently accepting non-perishable items such as peanut butter, pasta, rice, soup and meats, as well as cleaning supplies such as disinfectants, gloves, trash bags and scrub brushes. Monetary donations can be made through the Second Harvest website.