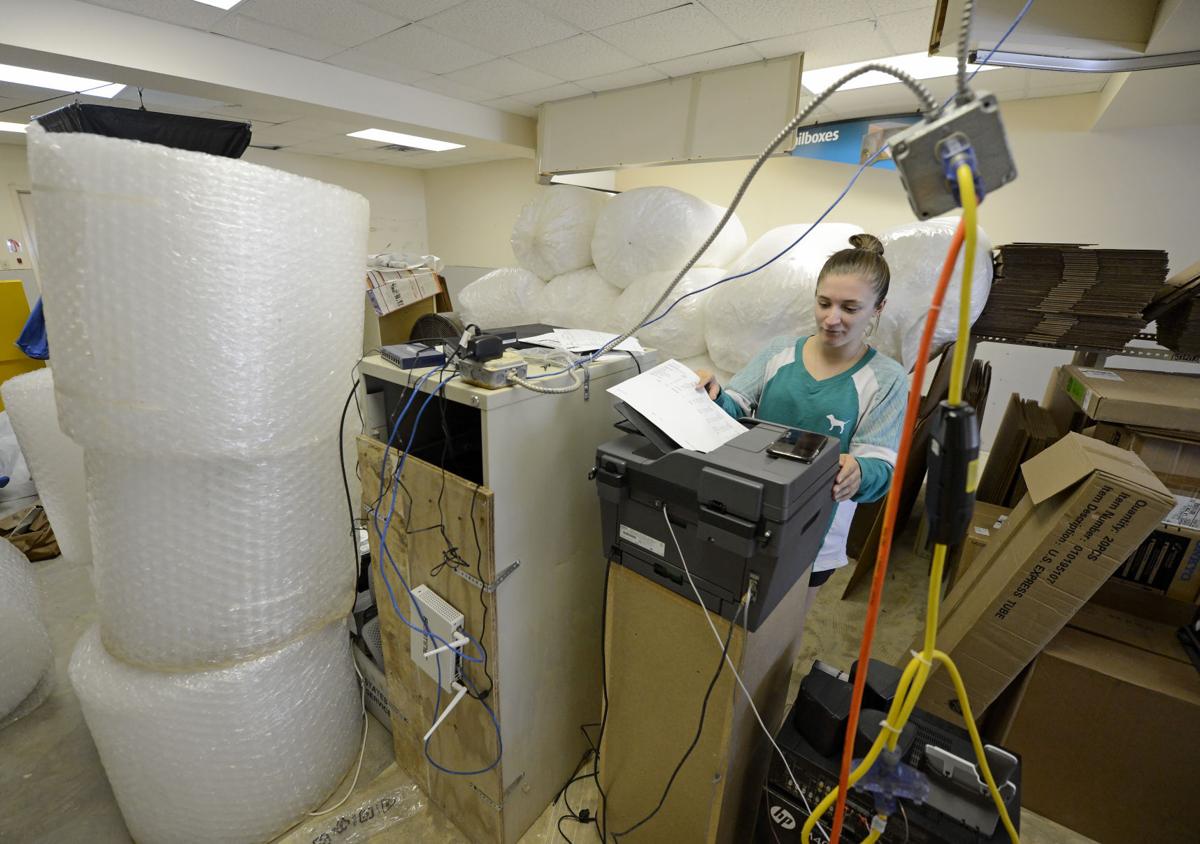 Store manager Splendid Galloway, 23, sends a fax for a customer Wednesday at the UPS Store in Denham Springs. Galloway and her husband bought a fax machine, computer and some folding tables to get their flood-damaged business going again as their landlord works to restore the shopping center it occupies. 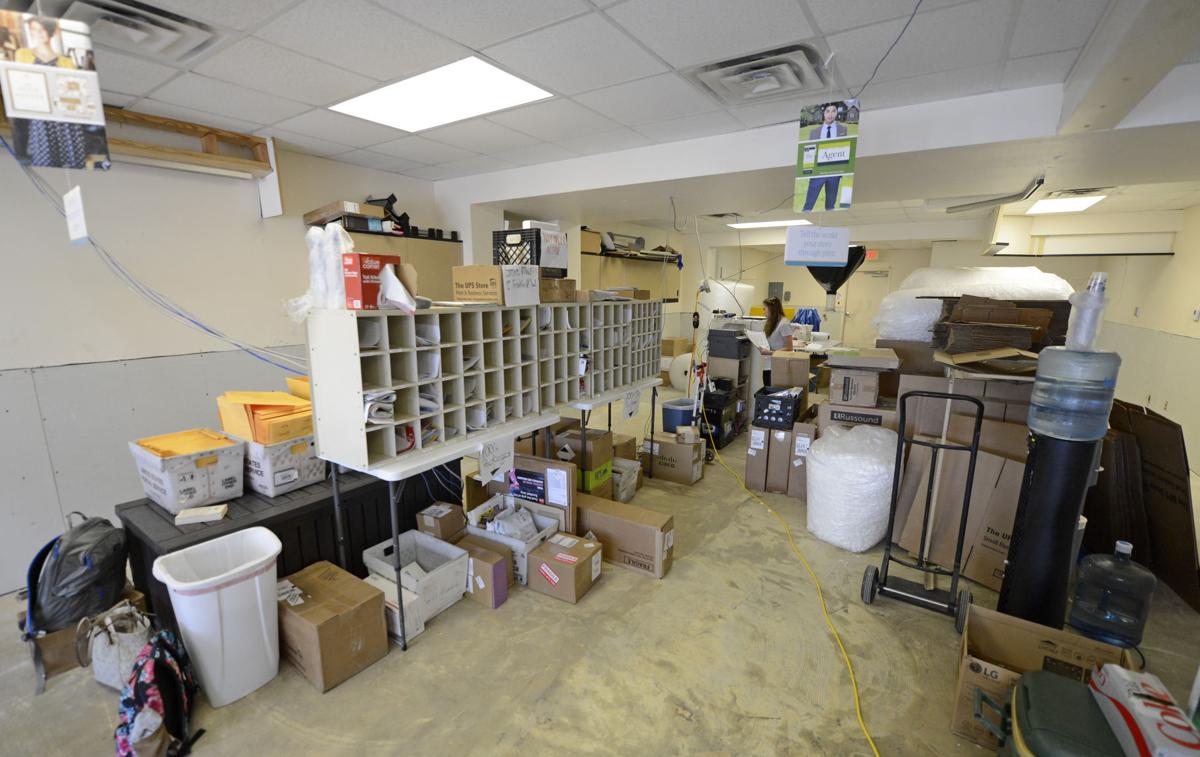 Employee Sarah Vinson, 21, center, had to navigate a maze of boxes and shipping materials in order to send a fax for a customer Wednesday at the UPS Store in Denham Springs. The business is doing its best to continue operating amid the turmoil caused by August's flood. 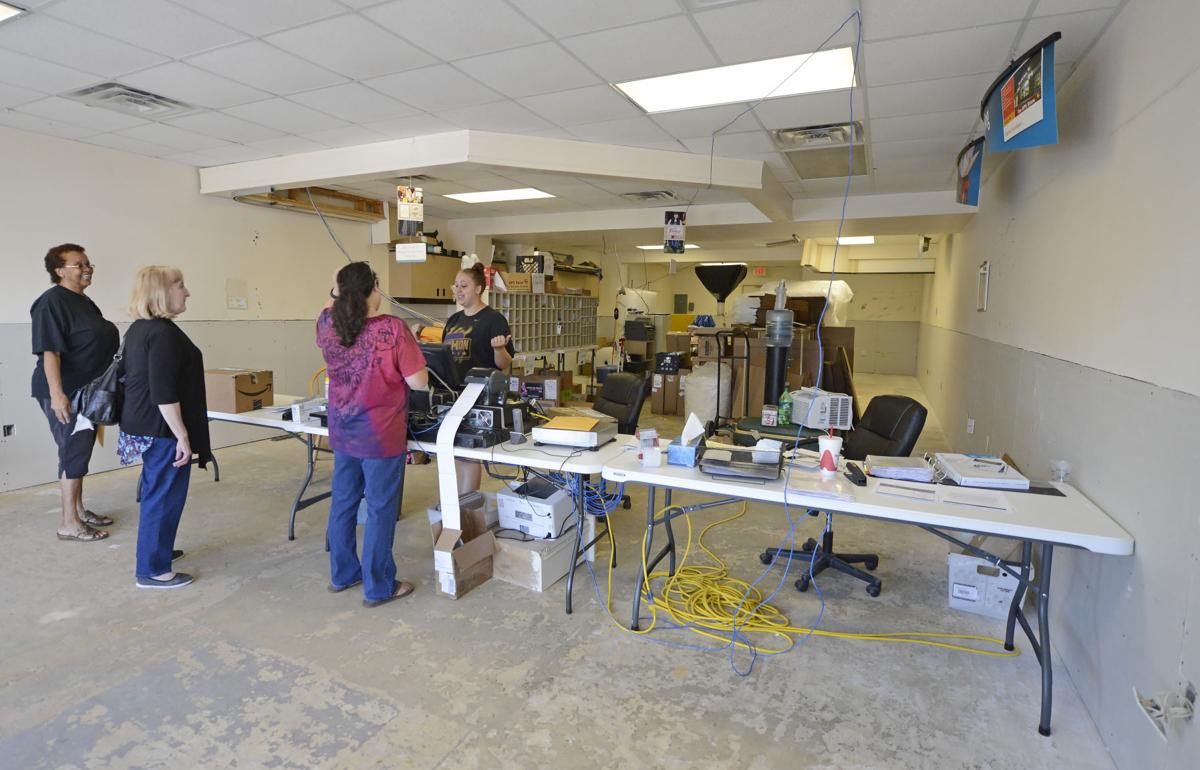 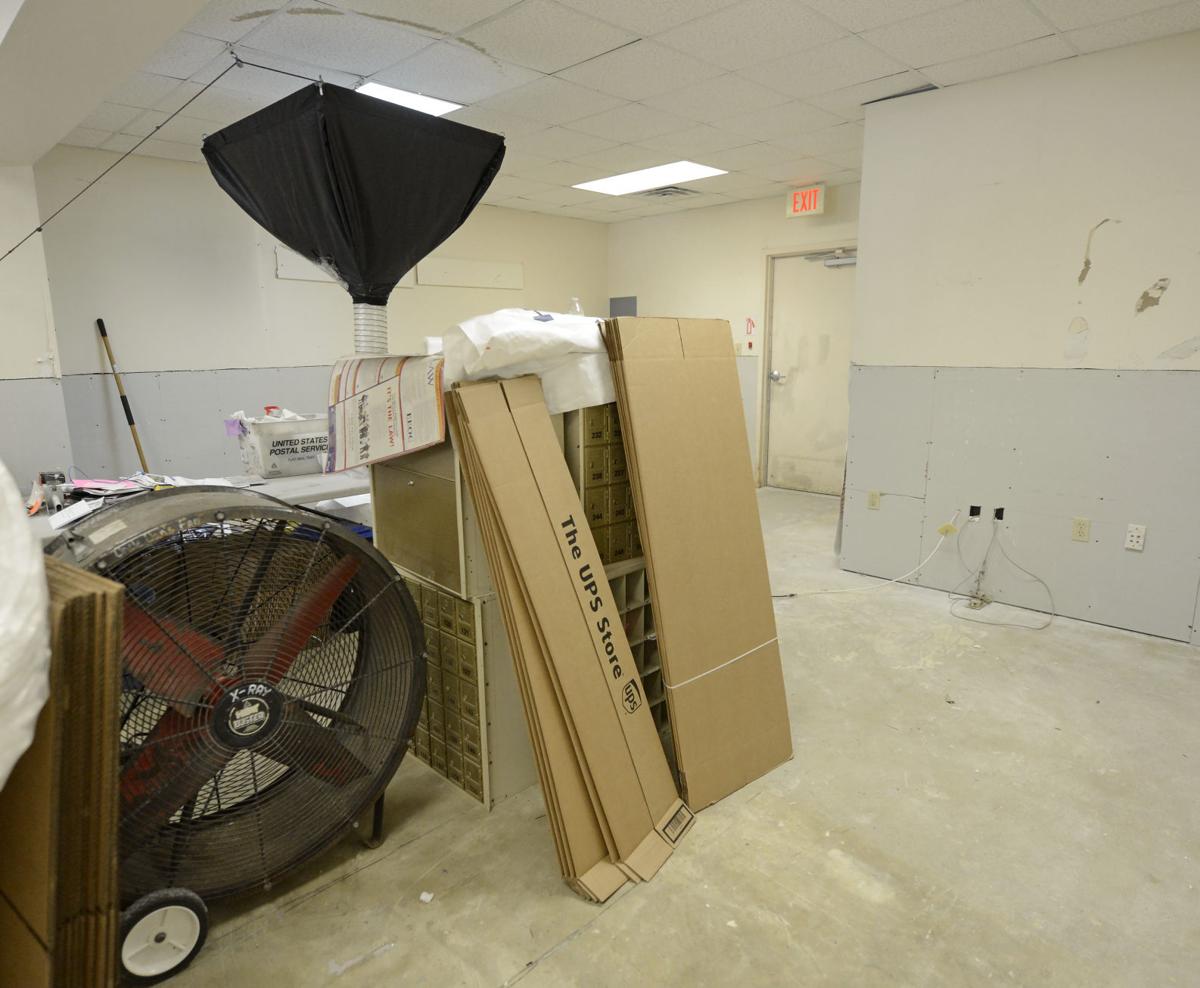 A UPS store in Denham Springs is operating amid unfinished drywall and shipping supplies stacked against a large box fan and post office boxes.

Store manager Splendid Galloway, 23, sends a fax for a customer Wednesday at the UPS Store in Denham Springs. Galloway and her husband bought a fax machine, computer and some folding tables to get their flood-damaged business going again as their landlord works to restore the shopping center it occupies.

Employee Sarah Vinson, 21, center, had to navigate a maze of boxes and shipping materials in order to send a fax for a customer Wednesday at the UPS Store in Denham Springs. The business is doing its best to continue operating amid the turmoil caused by August's flood.

A UPS store in Denham Springs is operating amid unfinished drywall and shipping supplies stacked against a large box fan and post office boxes.

One week after Kim and Kevin Galloway bought the UPS Store on Range Avenue, the skies opened up, the rivers rose and their new business, like thousands of others, flooded. The Galloways were lucky in one way. Their franchisor immediately sent help to gut the store, which took on 4 feet of water.

"We have been asking when walls would go back up and things like that," Kim Galloway said. Finally, the property manager took it on herself to hire someone to hang some drywall.

Before that happened, Galloway said she could see all the other suites in the building through the walls. Carpeting will be the Galloways' responsibility. The retail center's new air conditioning units have not been installed, and, for now, the store is making do with a big fan.

The Galloways' experience is far from unique. More than six weeks after record floods swamped thousands of area businesses, many small and midsized firms remain snared in a complex web of insurance and financing issues. Some landlords and property managers still have no idea whether their property insurance covers flood damage. Their tenants are left adrift, not knowing if or when repairs will be made and unsure if leasing a new location — assuming one is available — will stick them with two sets of rent.

"It's difficult for a tenant in a commercial property where the landlord is responsible for the property when disaster happens," said Jean-Paul Perrault, managing member of the McGlinchey Stafford law firm's Baton Rouge office.

The leases tenants signed, stuck in a drawer and forgot about typically give the landlord a certain amount of time to determine whether to repair the property or end the lease, he said. But the scope of the disaster has meant delays in insurance payments, in financing and in securing contractors — no small task when 100,000 homeowners are also looking to make repairs.

Take La Centrale Plaza, a 40,000-square-foot shopping center on Sullivan Road in Central that Kurz & Hebert manages for the owners. The center flooded, but the tenants want back in. The owners didn't have flood insurance and still owe money to their bank. So they sent Kurz & Hebert to the bank to borrow more.

The result is that the work at La Centrale remains far from complete.

"Because even though you might have a million dollars in coverage, they’re not going to come out and offer you a million dollars," Walker said. "It’s a constant negotiation, which is sad. Either way, it just takes so much time."

And that is a luxury few small businesses have. Most can't afford to lose a month or more of revenue. The National Flood Insurance Program says nearly 40 percent of businesses that flood never reopen.

Elisabeth Prescott, a partner with the Kean Miller law firm, said one of the biggest issues she's seen is the assumption that commercial property insurance works the same way as residential coverage, that it doesn't cover flood damage, Prescott said. The reality is it may.

"It's always safer to file (a claim)," Prescott said. "We all know that insurance policies are convoluted."

The byzantine language in commercial property insurance policies means that even though weeks have passed since the disaster, lots of property owners and managers are still trying to figure out if their flood damage was covered, she said.

Tara Emery, owner of London Bridge Early Learning Center on Monticello Boulevard, said that hers wasn't covered. Like most other business people and homeowners, Emery didn't buy flood insurance because her lender didn't require it when she applied for a mortgage. Emery's biggest challenge is coming up with the $100,000 it will take to repair the child care business.

Although many of the area's homeowners have gotten some assistance from FEMA, that avenue isn't open to businesses. Emery said she doesn't understand the thinking behind that policy. "We help the economy to keep going, and I think that there should be some type of allowance other than putting us into more debt," she said.

Emery has a mortgage, and she can't afford to take on more debt, even a low-interest loan from the Small Business Administration. Emery's business was among those awarded a grant from the Louisiana Small Business Rebirth Fund. But that $10,000 only covered the cost of drying out her building.

The more than 70 children London Bridge cared for have found other facilities, although some parents have pledged to come back when Emery reopens.

"It's just going to be a process. It's almost like we're starting over," Emery said.

The Galloways have applied for an SBA loan but don’t know if they’ll get one.

Emery’s and the Galloways’ situations are typical for small businesses, which lack the resources and insurance expertise of larger companies.

Those firms are more likely to have flood coverage, as well as the business interruption insurance that covers lost profits and payroll, said Cove Geary, a partner in Jones Walker's New Orleans office.

The number of post-flood legal questions prompted McGlinchey, Kean Miller and Jones Walker to create flood- and disaster-related law blogs. At McGlinchey, the greatest number of queries have involved applications for FEMA assistance and SBA loans.

"What that kind of reflects is that for small and midsized businesses it comes down to cash flow. You just have to have cash to operate your business," said Brad Axelrod, a member of McGlinchey's business and corporate matters section.

Small business owners are looking for sources of quick cash to cover repair and equipment costs, and short-term capital to pay their employees and suppliers, Axelrod said.

Perrault said the first thing tenants need to do is review their leases and find out what their rights are and what their landlord's rights are.

Axelrod said "many, many small businesses" don't have that ability so they should get their lease and take it to an adviser, a lawyer, an accountant or a business consultant who can help them make heads or tails out of the documents and then help them with a negotiation strategy.

Louisiana leads the country in properties that are repeatedly swamped by water and rebuilt using flood insurance payments, with state resident…

The National Flood Insurance Program, or NFIP, is $23 billion in debt, and we need to forgive it.