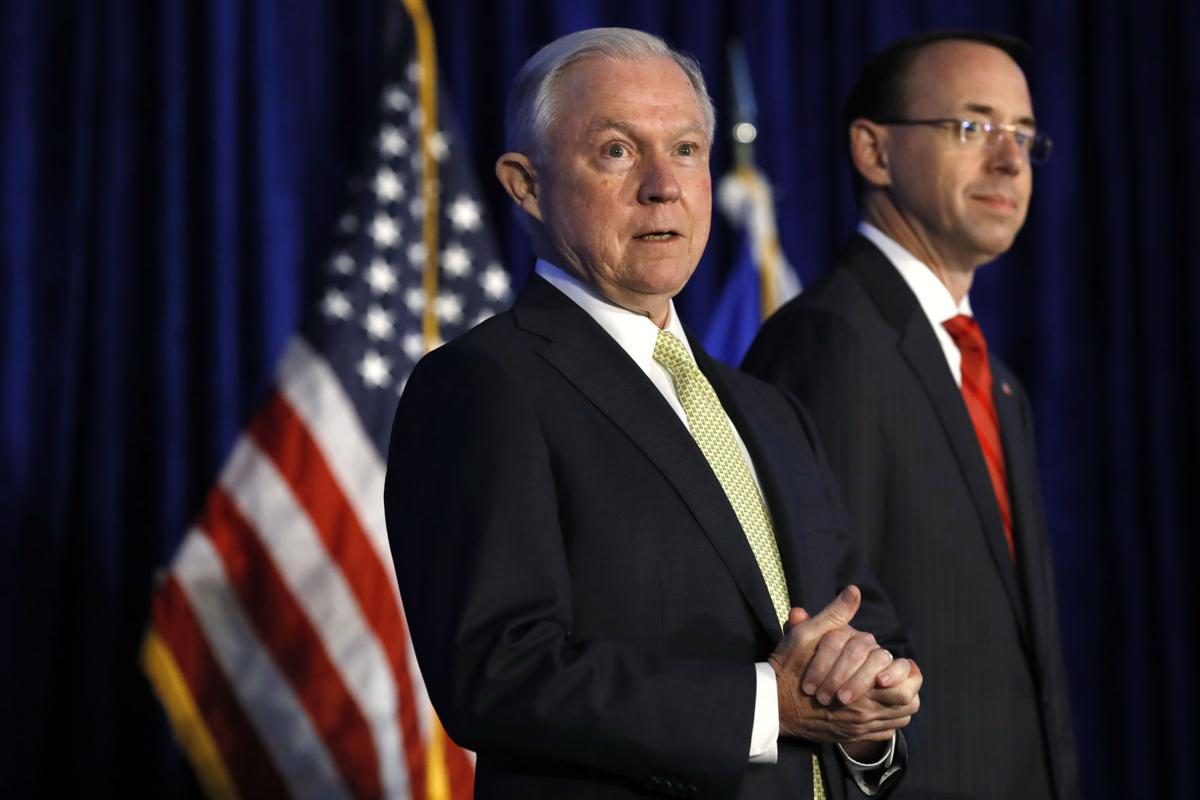 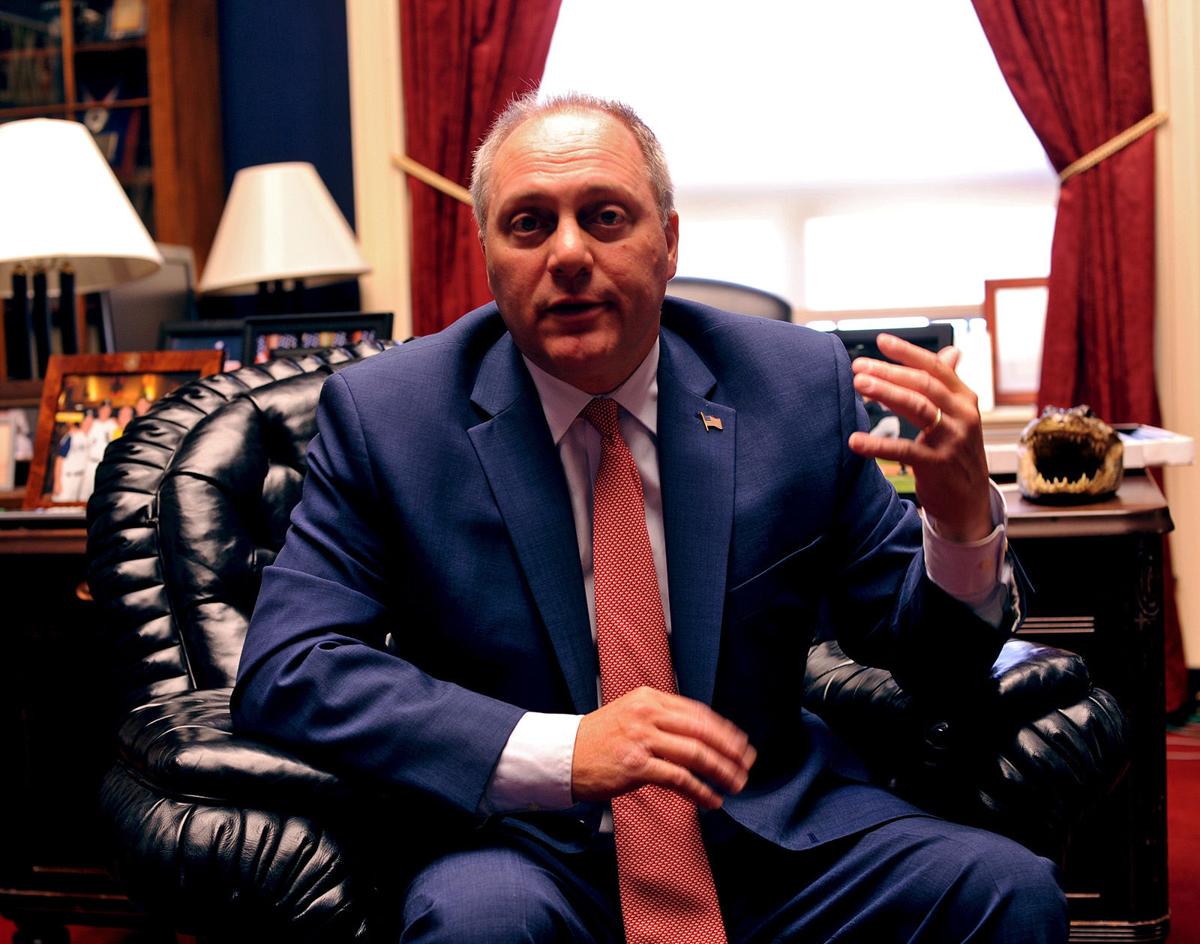 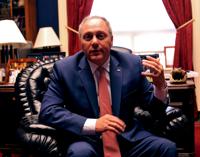 WASHINGTON (AP) — House Speaker Paul Ryan spoke out against an effort by a small group of conservatives to impeach Deputy Attorney General Rod Rosenstein on Thursday, dooming the endeavor for now and easing a months-long standoff between House Republicans and the Justice Department.

Ryan said the tussle over document requests between House Republicans and Rosenstein, who oversees the federal Trump-Russia investigation, doesn't rise to the level of "high crimes and misdemeanors" that could warrant impeachment under the Constitution.

"I don't think we should be cavalier with this process or with this term," Ryan said. He also said he is encouraged by progress on the document production.

Ryan’s comments came hours after House Majority Whip Steve Scalise, R-Jefferson, endorsed the impeachment effort in a Thursday morning appearance on Fox News. Scalise, in breaking with the speaker, became the highest-ranking Republican to throw his weight behind the effort by a group of 11 right-wing Republicans from the House Freedom Caucus.

Scalise told Fox News he’d vote to impeach Rosenstein if it came to the floor and called it “one more tool” to force the Justice Department to turn over documents related to special Counsel Robert Mueller’s ongoing investigation into Russian interference in the 2016 presidential election.

"If Rosenstein wants to comply and turn over the documents, we won't have this conversation," Scalise told Fox News.

Scalise and Ryan made their comments a day after the group of 11 House Republicans sharply escalated the extended clash with the Justice Department by filing articles of impeachment against Rosenstein, who oversees Mueller's investigation.

Their move late Wednesday came after months of criticism aimed at the department — and the Russia investigation in particular — from President Donald Trump and his Republican allies in Congress. Trump has fumed about Mueller's probe and has repeatedly called it a "witch hunt," a refrain echoed by some of the lawmakers.

Mueller is investigating Russian interference in the 2016 election and whether Trump's campaign was involved.

The impeachment effort was led by North Carolina Rep. Mark Meadows, the chairman of the House Freedom Caucus who talks to Trump frequently and often defends him to colleagues.

As Ryan voiced his disapproval, Meadows acknowledged that he didn't currently have the votes to pass the impeachment resolution and said he wouldn't use procedural maneuvers to trigger an immediate vote — something he had threatened to do. The House left Thursday afternoon for a five-week recess.

Instead, Meadows said he had a commitment from leaders to vote on holding Rosenstein in contempt of Congress when the House returns in September if certain documents are still outstanding. The agreement came after discussions on the House floor with Judiciary Committee Chairman Robert Goodlatte, R-Va., and the No. 3 House GOP leader, Rep. Steve Scalise of Louisiana.

The contempt resolution would first have to move through the Judiciary Committee, according to Republican aides.

Meadows said the five-week delay would give the department "one last chance" to deliver. He didn't rule out trying for an impeachment vote in the future.

Meanwhile, Attorney General Jeff Sessions defended Rosenstein in a Boston speech, saying he has the "highest confidence" in his top deputy. Rosenstein has overseen the Russia investigation since last year, when Sessions recused himself following reports of his own meeting with the Russian ambassador.

Asked in May about rumblings that House Republicans might move to impeachment, Rosenstein was defiant.

"I think they should understand by now, the Department of Justice is not going to be extorted," he said.

Meadows, Ohio Rep. Jim Jordan and the other Republicans who introduced the resolution have criticized Rosenstein and Justice Department officials as not being responsive enough as House committees have demanded documents related to the Russia investigation's inception and a now-closed investigation into Democrat Hillary Clinton's emails.

The five articles of impeachment would charge Rosenstein with failing to produce information, though the department has provided lawmakers with more than 800,000 documents. The resolution notes that Rosenstein was one of several department officials who approved what some Republicans say was improper surveillance of Trump campaign adviser Carter Page.

It is highly unusual, if not unprecedented, for lawmakers to demand documents that are part of an ongoing criminal investigation.

At a House hearing last month, Rosenstein, along with FBI Director Christopher Wray, faced angry Republicans who alleged bias at the FBI and suggested the department has conspired against Trump. Still, some GOP lawmakers said they would draw the line at impeachment.

"Impeachment is a punishment; it's not a remedy," said House Oversight and Government Reform Chairman Trey Gowdy, who has led one of several House GOP investigations into the department and has complained of alleged anti-Trump bias. "If you are looking for documents, then you want compliance, and you want whatever moves you toward compliance."

The impeachment resolution came about two hours after Meadows, Gowdy, Goodlatte and other GOP lawmakers met with Justice Department officials about the documents. The department has created new search systems, set up classified reading rooms and tasked dozens of employees to produce the hundreds of thousands of documents that Republican lawmakers have requested over the past year.

Democrats on the House Judiciary, Oversight and Government Reform and intelligence committees called the impeachment effort a "panicked and dangerous attempt to undermine an ongoing criminal investigation in an effort to protect President Trump as the walls are closing in around him and his associates."

Democratic Reps. Jerrold Nadler of New York, Elijah Cummings of Maryland and Adam Schiff of California said Rosenstein "stands as one of the few restraints against the overreaches of the president and his allies in Congress."

In addition to Meadows and Jordan, the Republican lawmakers who sponsored the impeachment articles are Reps. Jody Hice of Georgia, Jeff Duncan of South Carolina, Andy Biggs of Arizona, Louie Gohmert of Texas, Matt Gaetz of Florida, Scott DesJarlais of Tennessee, Paul Gosar of Arizona, Bill Posey of Florida and Scott Perry of Pennsylvania.