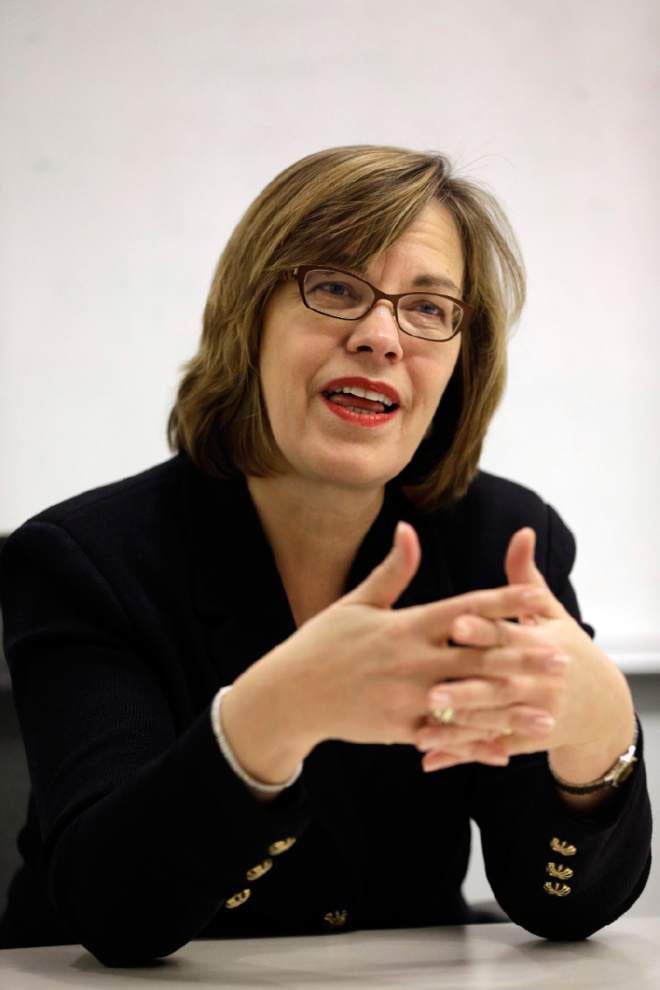 Associated Press photo by MARY ALTAFFER -- Popeye's CEO Cheryl Bachelder speaks during an interview. Bachelder has been the restaurant chain's CEO since 2007. During that time, Popeyes Louisiana Kitchen has been playing up its regional identity and remodeling stores to be more inviting. 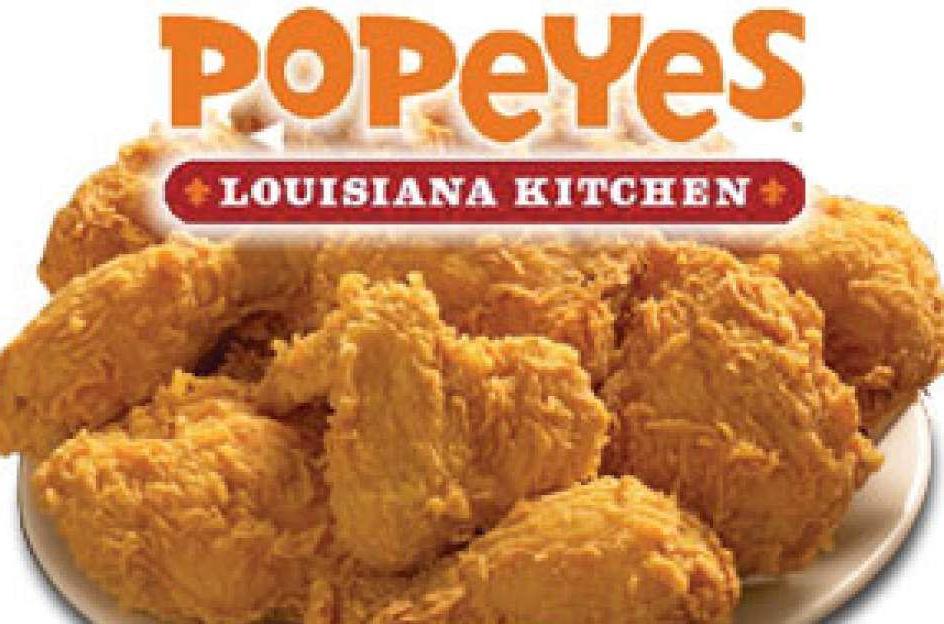 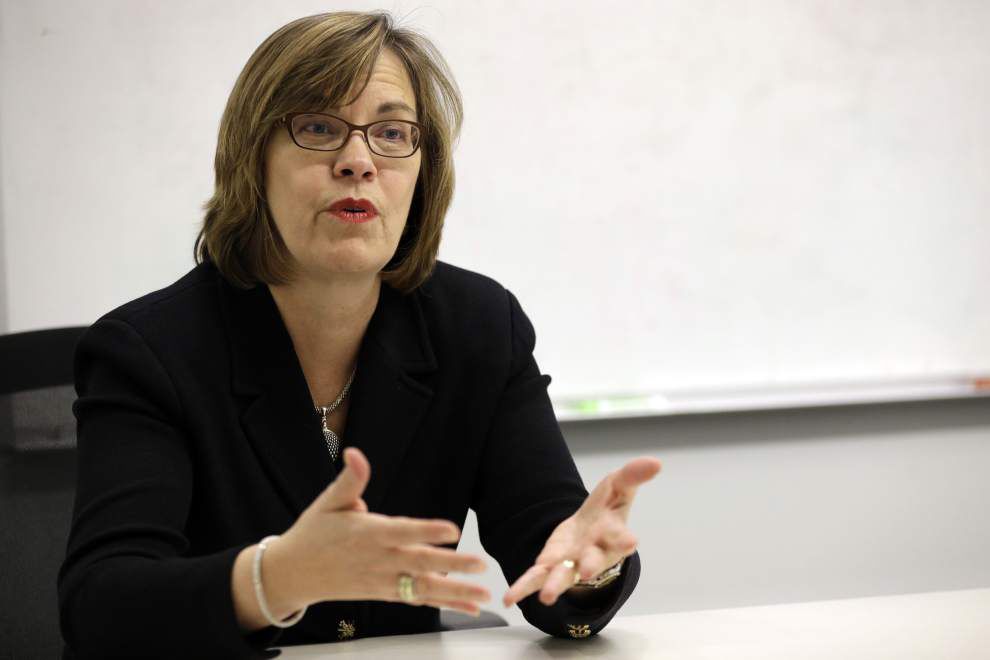 Associated Press photo by MARY ALTAFFER -- Popeye's CEO Cheryl Bachelder speaks during an interview. Bachelder has been the restaurant chain's CEO since 2007. During that time, Popeyes Louisiana Kitchen has been playing up its regional identity and remodeling stores to be more inviting.

The 58-year-old executive’s frankness isn’t surprising considering Popeyes turnaround during her tenure represents a vindication of sorts. In her upcoming book, Bachelder recounts a low point in her career when she was serving as president of KFC and her boss suggested it was time for her to go.

“In other words, I got fired. Few things are as clarifying as losing your job. My confidence was shaken,” she writes.

After leaving KFC in 2003, she says she decided to spend her “retirement” serving on boards, including for the parent company of Popeyes. She got another shot at proving herself in late 2007, when the struggling chain tapped her as its next chief executive.

Since then, Popeyes Louisiana Kitchen has been playing up its regional identity and remodeling stores to be more inviting. Sales at established U.S. restaurants have climbed in each of the past six years and the domestic store count has expanded to 1,870, up from about 1,580 in 2007.

Here’s what Bachelder had to say about Popeyes and the industry in an interview with The Associated Press.

Q: How does Popeyes chicken differ from Chick-fil-A and KFC?

A: The first thing you notice about Popeyes is the marinade. It’s a real reddish, orange color. It sticks to the chicken, you see it all through the chicken, and that’s where the flavor is. And our chicken is dipped in an egg-and-flour batter before it’s fried. That gives it a really crisp texture. There’s more of (the batter) and it’s crisper.

I’m not knocking (Chick-fil-A) — they’re great competitors. But their product is very plain vanilla. Who else did you say? KFC? Oh, them (laughs).

Their Original Recipe is deep fried in a pressure cooker, so it’s got a soft coating on it, and today’s customer likes a crisper coating. And the seasoning is basically just kind of a pepper flavor, so it doesn’t really have the complex flavors we have.

(Representatives for Chick-fil-A and KFC declined to respond).

Q: What was the state of Popeyes when you became CEO?

A: The company was 35 years old, so it was well-established and had a strong footprint. But it was tired, not relevant and not talking to its customers like it should.

We did a huge turnaround that launched in the fall of 2008. As you may remember, the fall of 2008 was an unusual time to invest heavily in your business, so we were either crazy or brave. I choose to think we were brave.

Our market share is up 50 percent from that date.

Q: It used to be Popeyes Chicken & Biscuits. Why did you change the name to Popeyes Louisiana Kitchen?

A: The brand is from Louisiana, so it’s true. Our founder created these recipes out of the Cajun and creole heritage of that state. It’s the most interesting American food there is, and we’re an international brand so it exports really well too.

It’s a much stronger identity.

Q: How has Popeyes food changed with the revamp?

A: We’ve done incredible innovation from our Louisiana roots. We did something early on called Wicked Chicken that plays on what you might find on Bourbon Street — a little mystery, a little intrigue.

We’ve done a lot of boneless, portable foods that better suits your lifestyle today. We also bought seafood front and center. We’re a Gulf Coast company, so we should have seafood credibility.

A: We like to offer delicious food that our guests want, so we’re constantly testing innovative food items, fried and not fried. The challenge is, if you eat a lot of non-fried chicken at home — you have the dry, broiled piece of chicken — when you go out you want the more indulgent chicken.

Q: Are there disagreements with franchisees over what to add to the menu?

A: Every quarter, we have free-flowing ideation sessions. We come with 80 ideas or more ideas. Then there’s very quantitative testing.

A franchisee is an emotional, passionate entrepreneur, and we want their ideas. We just don’t want to do their goofy stuff. That’s one of the benefits of doing it in a hard-research and quantitative way.

It governs both of us.

Q: How will the fast-food industry be different in five years?

A: I think the whole sector is moving toward quality food, which is something we’ve always stood for. In the remodeling of our system, we’ve really brought to life the heritage and quality of the food. We have spice jars up by the front counter with actual spices in them, actual red beans in them, actual rice, to celebrate the ingredients.