This article is brought to you by Blue Cross and Blue Shield of Louisiana.

In the spring, many Louisiana businesses closed for several weeks during stay-at-home orders in the early stages of the COVID-19 outbreak. There was some optimism in late spring and early summer as those rules were relaxed, positive case numbers declined and more establishments opened. But recently, amid another rise in cases, business owners who can legally open are trying to decide whether it’s feasible to do so.

“It’s a brutal decision. Businesses are designed to run and have cash flow. When your traffic and cash flow gets disrupted, it throws everything you know about running a business out the window,” said Mike Bertaut, a healthcare economist with Blue Cross and Blue Shield of Louisiana and author of the Straight Talk blog.

Bertaut said that now more than ever, business owners need to reach out to customers and find out what services they want in the current environment. Meanwhile, individuals need to be responsive to the situation and understand that actions such as wearing a mask, washing hands often and social distancing are just as much about the local economy as they are about public health.

“What I see for the future is entirely dependent on the good people of Louisiana to play ball,” Bertaut said. “If we have a large segment of the population that resists this, we may be stuck here for a while. Repairing Louisiana’s economy is all about getting to Phase 3 and Phase 4, and the only way to get there is to stop the spread of the virus by washing hands, wearing masks and doing the things we have been saying to do since March.”

Bertaut said the coming weeks will be “a critical point” for the economy as thousands of individuals wait to see if Congress extends additional unemployment benefits. The federal government had added $600 per week to those benefits, but that agreement lapsed at the end of July with no guarantee that any additional money will continue. Typically, unemployed Louisiana residents can receive $247 per week.

“I believe that extra money has kept a lot of people in their apartments or paying their house notes or paying their bills,” Bertaut said. “It would be one thing if we were in Phase 3 or Phase 4 and more businesses were open, but we’re not at that point now. We’re still in a situation where the feds need to provide some subsidy for these folks.”

Bertaut said many Louisiana workers were hit especially hard because their jobs were in industries that have been affected the most. The oil business has been faced with less fuel demand, a price war between Russia and Saudi Arabia and an excess of oil in the marketplace that has driven down prices to near-unsustainable levels. That has not only affected petroleum companies, but hundreds of oilfield-related businesses as well.

In addition, the cancellation of concerts and events, restrictions on large gatherings, limitations on bars and restaurants and qualms about traveling have all combined to negatively affect the travel and hospitality industry, especially in tourism-heavy New Orleans.

Those industries alone have accounted for a large percentage of Louisiana’s job losses. While certain businesses may now be hiring at a slower pace and there may be fewer overall jobs currently available, Bertaut said several websites have regularly updated listings.

“I know the Louisiana Workforce Commission site is being updated almost every day. There are other websites, like Glassdoor and Indeed and others,” he said. “There is no reason not to do what you would normally do if you were unemployed.” 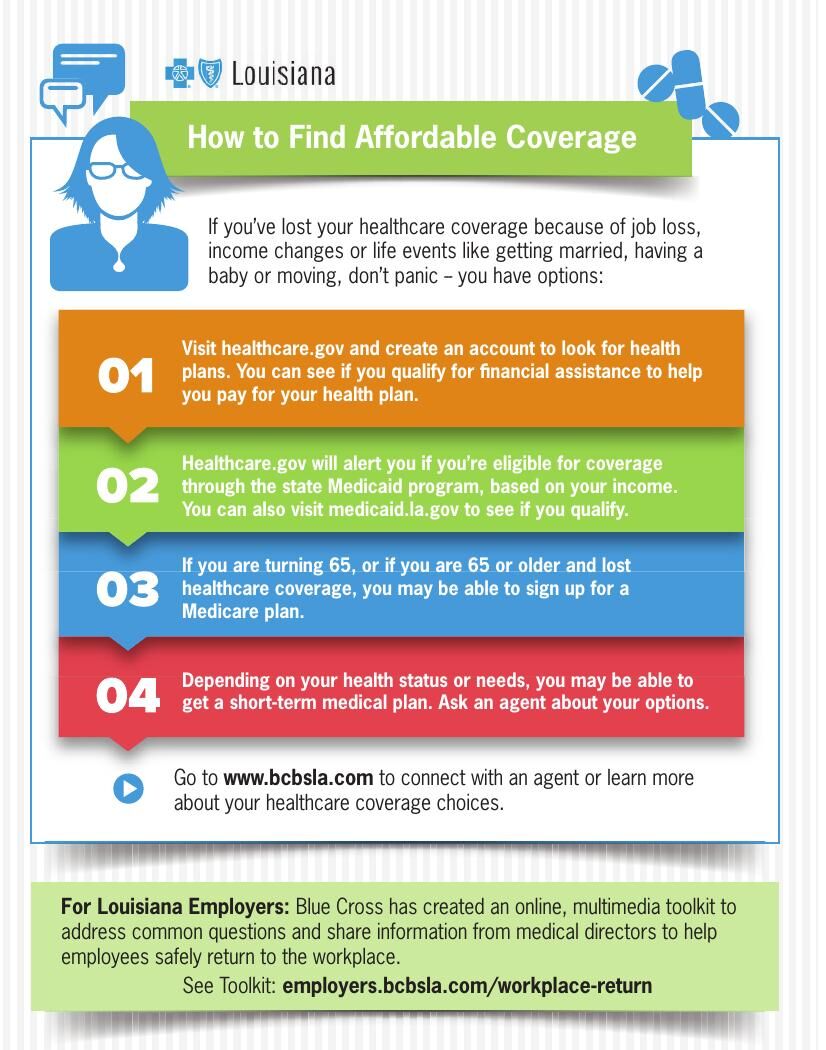 In addition to losing steady income, the loss of a job usually means the loss of health insurance. The key when that happens, Bertaut said, is “no panicking.” Businesses must legally offer COBRA insurance to employees who have lost their jobs, but the high cost is often prohibitive. Bertaut pointed out that no one is obligated to enroll in COBRA. Instead, those who meet necessary income requirements may qualify for Medicaid. If the person’s income is too high, they can shop for plans on the federal healthcare.gov exchange, where multiple options at various price points are available. Losing a job triggers a special enrollment period where you can sign up for health insurance outside of the open enrollment period. In addition, people who are 65 or older and lose employer-provided health care coverage can look into coverage through Medicare.

While the immediate future is far from certain, Bertaut said he still has optimism in the long term.

“Once there’s a vaccine in the marketplace and people can wear masks only if they are at risk, I think you will see life go back to normal,” he said. “The economy was in a wonderful condition before COVID. After there’s a big crisis and once things return to normal, we generally see a big surge because there’s so much pent-up demand. If restaurants were operating normally, I think you’d see people eating out as much or maybe even more than before. But it’s just not going to be a quick process.”

Be sure to get your flu shot, but expert advises to wait a few weeks

Dr. Karen Muratore wants you to get a flu shot this year — especially this year. But not right away.